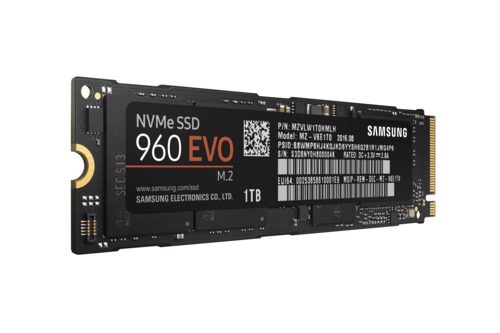 Samsung's 960 EVO line of solid-state drives is part of their second generation of retail M.2 form factor SSDs. These drives run at a full PCI-Express 3.0 x4 speed, which provides lots bandwidth and results in performance that is several times what a SATA III based SSD can provide. This 1TB model has sequential read speeds of up to 3.2GB/s with write speeds up to 1.9GB/s.

The limitation of these EVO series drives, however, is that not all of the memory on the drive is capable of those speeds. A portion is, but the rest of the drive has slower write speeds. That can show up in situations where a lot of data is being written at once: after a time, once the faster part of the drive is used up, the write speeds will drop substantially. This situation is not likely to arise in typical desktop usage, but can show up in some workstation loads.

Please note that some M.2 slots on motherboards only run at PCI-E x2 speed, rather than the x4 this SSD is capable of. In such cases, performance will be limited by the speed of the slot.

Nick Krader (Production Technician) Says:
I purchased this drive to replace my pair of 850 EVO 500GB (Raid0) that was used for my Steam drive. I have only had a good experience with this replacement. This drive is faster than my old Raid and the lack of failures we experience here comforts me that this drive will last for many many years to come.
Model: Samsung MZ-V6E1T0BW