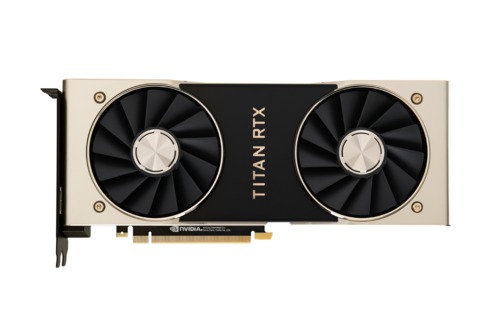 NVIDIA's Titan RTX is the Turing-generation entry in the Titan video card line, which straddles the fence between consumer and workstation graphics segments. It looks just like the GeForce RTX 2080 / 2080 Ti Founders Edition cards, except with a gold finish instead of silver. Performance-wise it is a hair faster than the 2080 Ti, and comes equipped with more than double the VRAM: 24GB of fast GDDR6 memory.

Like the GeForce and Quadro cards in this generation, the Titan RTX features both dedicated RT cores for ray tracing and Tensor cores for machine learning inference. The RT cores are brand-new with the Turing architecture, while the Tensor cores debuted on the recent Titan V and Quadro V100 cards. This specialized hardware will allow for new functionality in games and GPU-accelerated applications, but will require such programs to be written specifically to utilize them in order to see much benefit.

In a first for the Titan series, this card features dual cooling fans - again, like the GeForce 2000-series Founders Edition models. This is great for keeping a single card running cool and quiet, but results in most of the heat it generates being pumped back into the computer. That makes these a poor choice for use in multi-GPU systems, especially in configurations where there will be little or no space between each card. When installing more than GPU in a system, cards with a blower-style fan and rear heat exhaust will be much better.

Finally, in regards to connectivity, the Titan RTX has four monitor outputs: one HDMI 2.0b and three DisplayPort 1.4. VirtualLink - a specialized Type C port combining DisplayPort, USB 3.1, and power - is also included, for single-cable connectivity to next-generation VR headsets.