I don't drool often, but I have to say — this is an exciting time to be in the technology field.  We work closely with both Intel and nVidia, and they both have new products out that are changing the way I look at high performance computers.

Intel has recently released their CPUs based on a 45nm process.  The two CPUs we're carrying today are the E8400 and the QX9650, but we'll have more in a few weeks, when we plan to phase over to an entirely 45nm CPU line.  These new CPUs are faster, run cooler, and are cheaper than their predecessors.   They also are easier to overclock. 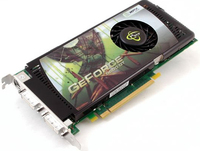 Now, new technology is nothing new.  Every time something new comes out, we can all marvel at the performance.  What makes this different for me is the change in pricing from Intel and nVidia.  I'm seeing a definite shift to lower price points, and that is really exciting!  It was only a month ago that we were sending out machines for review that had three 8800 Ultras in triple-SLI, showcasing the absolute fastest computer we could build.  Those computers came with a crazy $10,000 price tag, but scored 26,0000 in 3DMark (a popular gaming benchmark).  Last week on our production bench, we built a computer with the new technology from Intel and nVidia, that scored 23,000 in 3DMark, but at a price point of $2,500.  That's amazing!   Now, in reality, when you run at higher resolutions or turn on more advanced features in games, you'll find that performance gap widening, but still — I'm very impressed with how closely this new hardware compares, in a totally different price class.

This is one of the few times that I've thought about replacing my home machine.  Usually I wait for something to trickle down so I can get it cheap, as I don't really care that much about performance.  But to be able to drop a couple hundred dollars on a new CPU, and couple hundred dollars on a new video card, and get a level of performance that would have been absolutely out of my price range only a month ago — that's exciting!