It's been a while since we've posted something to the ol' Puget Blog. Why the neglect? We've been crazy busy trying to roll out new website features and keep up with all the newest hardware launches! We've got a brand new layout on the site for each of our branded systems, and a bunch of slick new hardware, like the Nvidia 'Fermi' Video cards.

I wanted to share some fun before-and-after pictures of a system we were working on recently. If you don't live near us here in Seattle, you might not know that we do computer repair too. We offer free diagnostic, and very reasonable rates on the work. (To be honest with you, we see local computer repair as a good way to spread word-of-mouth, not really as a moneymaker).

Anyhow, we have a customer who had just picked up his brand new Puget Deluge gaming computer, and he was really impressed with the cable and wiring job that our production team did. He mentioned that he had an old system laying around that he had built a few years ago, and asked if we could give it a bit of a face-lift.

So I wanted to pass along a few of these shots. Our build staff does a great job, and I'm glad to have a chance to feature a bit of their work!

First, here's how the computer looked when it arrived:


Whew! When the customer was building this, the power supply didn't fit in the chassis without modification. He removed the bracket that was blocking, but then there wasn't anything left to support the unit. The result was that it didn't mount evenly inside the chassis. Liquid Cooled systems can get pretty tight. He's added some lights for cool effect, but the mess of cables and tubes was working against him.

Strangely, We found an extra stick of RAM tucked under a cable! It didn't match the speed or brand of the memory in the rest of the system. The customer laughed when I told him about it, and had no clue how it got there.

So we cleaned that whole thing up, blew out the dust, recabled everything, new tubes, new liquid, fabricated a power supply mount, and removed the mysterious RAM. The customer opted to have us remove the video card from the liquid cooling loop (to maximize the cooling on the CPU), so we installed a new heat sink for him.

Here's a few of pictures after we got done with the thing.


I really wish we'd gotten a good picture of the system with the side panel off, but I think you can still get a pretty good idea. Here's an up-close shot of the case window, where you can see what's going on. Not to shabby! 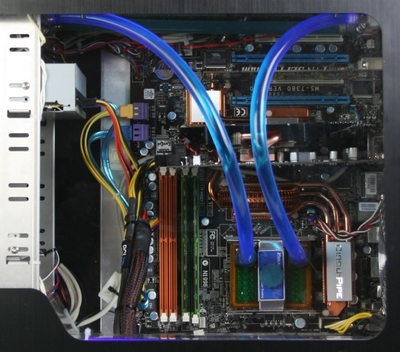 So that's about it. Kudos to the production staff, the customer was really happy with how the system looked when he picked it up.

I'll do my best to put out more frequent updates on this blog. Any requests?