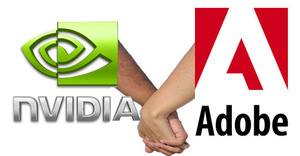 Traditionally, over at least the past 15 years, the main role of a video card in a computer has been to accelerate 3D graphics. That is a large part of what has made modern computer games possible, and it has also contributed heavily to CAD / CAM work and digital animation.  Video cards have also helped with 2D graphics and video playback, but the main focus has been on 3D speed.

This trend is beginning to change, though. As CPUs have seemed to reach an upper limit on pure clock speed many programmers are looking elsewhere for ways to improve performance in a variety of programs. Designing software to take advantage of multi-core processors has been a big benefit, as is the push toward 64-bit software that can use more RAM. Video cards are also being explored as a source of more processing power, and in situations where their massively-parallel architecture can be harnessed effectively it can be a huge benefit.

One such situation is video editing, and many smaller programs and plug-ins have been making use of either CUDA (for nVidia cards) or Stream (ATI) to accelerate video encoding. The recent launch of Adobe’s latest version of Premiere Pro – CS5 – marks the first instance of a major editing program adding this kind of functionality. In order to use this feature in Premiere Pro, though, you need to have the right video card – so I’d like to take a moment to describe the situation, hopefully helping our customers to make an informed choice when upgrading or buying a new computer.

The name Adobe has given to this new part of Premiere Pro is ‘Mercury Playback Engine’, and you can find their official info about it at these links:

In short, the changes to Premiere Pro in CS5 allow a lot of the most popular editing tools to run on the video card instead of the CPU, freeing it up to work on other things and increasing performance overall to the point of real-time editing operation. To facilitate programming this, Adobe selected nVidia’s CUDA technology – meaning this only runs on nVidia graphics cards (sorry ATI fans!). Further, Adobe has only tested and approved use of the Mercury Engine on a handful of cards at this point: the GeForce GTX 285 and Quadro FX 3800, 4800, 5800 and CX. The first of those is an older model card, and hard to find these days, and the Quadros are all quite expensive. That puts a pretty high barrier of entry to this technology right now, at least for folks wanting to stick with official Adobe-supported hardware.

However, it turns out that this list is just an artificial limitation. The actual underpinnings of the Mercury Engine are much more lenient: an nVidia card with CUDA support and at least 756MB of onboard RAM. That opens up a huge amount of potential from both nVidia’s GeForce and Quadro lines of video cards, but enabling the Mercury Engine on those cards does require a little trickery. There is a configuration file in Premiere Pro installation folder which governs which cards are required for the Mercury Engine, and it is simply a matter of adding your appropriate nVidia card to that list and then adjusting a setting in the nVidia control panel. For a full walk-through, as well as more details on this workaround, check out this blog post from Krama.tv:

In case you still aren’t convinced of the value of using CS5 and the new Mercury Playback Engine, here are some benchmarks and videos that will help show just how much of a difference this GPU-accelerated workflow can make:

Benchmark showing CS4 vs CS5 for both rendering and AME encoding (scroll down to see the graphs in question):

Videos of the Mercury Engine in action:

If you’d like to purchase a computer designed for use with Adobe Premiere Pro CS5 and the Mercury Playback Engine, please contact our sales consultants via email at [email protected] or phone (toll-free) at 1-888-PUGETPC (784-3872).