The time has come. The time is now. And with apologies to Marvin K. Mooney, it’s time to consider running Windows 8 on your desktop or laptop computer.

Although there’s no shortage of opinion surrounding Microsoft's latest operating system, Windows 8 remains somewhat of an enigma. I’ve spoken to people who have mentioned the following:

Microsoft has added to the confusion with a string of commercials that largely fail to provide compelling reasons desktop users may want a new computer with Windows 8. Most of the ads I’ve seen are focused on all-in-one touchscreen computers or the Microsoft Surface laptop/tablet hybrid.

This is unfortunate because there are a number of compelling reasons a traditional desktop user may actually enjoy using Windows 8 and specifically, the latest update, Windows 8.1. I’ve been running Windows 8 since the day it arrived on a two year old Serenity with Intel i5 2500k processor, 16 GB RAM and fast Samsung SSD.

But I’ve recently installed Windows 8.1 on two older computers in our home. Both are Intel Core 2 Duo systems with 4 GB RAM, traditional drives, and NVIDIA 430 graphic cards. They are by no means state-of-the art systems yet both of them feel zippy again under Windows 8.1. If you’re running Windows 7, you should have no problem upgrading to Windows 8, and you just might see a minor bump in performance too.

By far the most controversial aspect of Windows 8 has been the removal of the well-known START button. Windows 8 replaced the START button with, well, nothing and that was the problem for many users who were not used to using keyboard shortcuts to access programs and system settings. Sure, one could pin a program’s icon to the desktop or taskbar, but the change was too much for many of Microsoft’s staunchest supporters. Many long-time Windows users felt that Microsoft was forcing a tablet interface on them for no particular reason other than to prepare them for a future Windows tablet purchase. I can't say I blame them but I'm over it.

With Windows 8.1, Microsoft is meeting their customers half-way by bringing back the START button, but not the START menu. But I am happy with this change because I’m able to access many of the administrative functions by right-clicking on the START button while continuing to use the Windows START tiles to access all my programs. Pressing the WINDOWS key displays the programs I use most often. Do yourself a favor and spend a few minutes customizing your programs and tile sizes. You can pin your most used programs to the START screen and even resize tiles now based on your preferences.

I've configured my START screen below to show only the programs I use each day. I find it more useful and configurable than the traditional START menu. Notice how I'm using three sizes of tiles to balance the screen. Don't see a program you need? Just start typing its name and a pane shoots in from the right with what you're after. 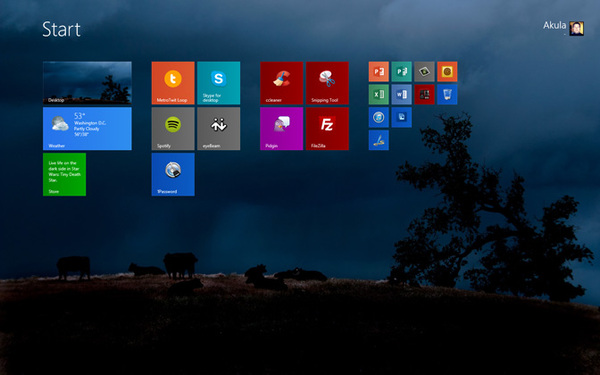 There are a number of new features packed into Windows 8.1, but the one reason I decided to install it on all the computers I own is for one reason: it’s more stable than Windows 7. I know a lot of you won’t enjoy hearing this and some of you may disagree with me which is fine. But those occasional error messages and rare BSOD are gone under Windows 8. I have not had a single BSOD in over a year on my primary PC.

Even on my two older PCs, Windows 8 has run perfectly. Even the HomeGroup feature works well!  Maybe the optimization of system processes and lower memory footprint is what makes all three of my computers feel more responsive under Windows 8. And we all love speed but it means nothing if your systems isn't stable. That's not a problem because Windows 8 is freaking stable.

So yes, the time has come. If you’re considering a new PC that runs Windows, I strongly recommend going with Windows 8.1 over Windows 7. It’s different. It’s controversial. It’s reliable. And it’s also the better choice for most people.