Nearly every day a customer asks me how Windows 10 is doing in terms of sales. It's usually wise to wait a few months to gauge how a new operating system is performing. As much as Microsoft wants everyone to move to Windows 10, it can take time for the hardware makers to test their products and release updated drivers for a new operating system.

Microsoft released Windows 8 to the public just under three years ago. It shouldn't come as a surprise that we didn't see a lot of pent up demand from our customers. We had a few customers who were curious and decided to make the jump, but the vast majority of our customer hit the snooze button on 8 and stuck with 7. 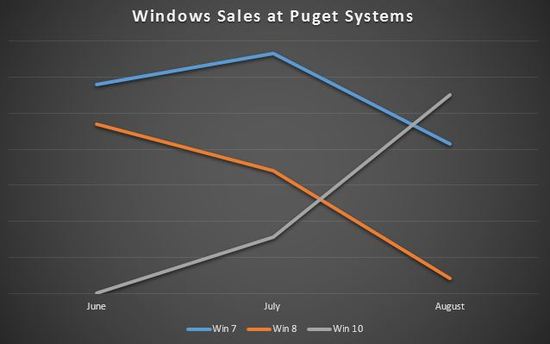 Although I personally recommended most people move to Windows 8, and later 8.1, it's not difficult to see why many people stayed with Windows 7. Microsoft made the odd assumption that Windows desktop users no longer wanted a START menu, and the traditional desktop was pushed aside to make way for large, colorful tiles that might have felt at home on a phone or tablet, but never quite felt right on the desktop. Microsoft attempted to address some of these complaints with subsequent updates, but it was too little too late and Windows 8 never quite caught the interest of our customer base.

Windows 10 has only been available since mid July, but if initial sales are any indication, Microsoft appears to have a hit on its hands. I want to be clear that Windows 10 hasn't come without a few issues surrounding activation and drivers for graphic and sound cards. These issues have mostly been confined to customers upgrading from Windows 7 or 8. New computers ordered with Windows 10 have been solid.

As you can see from the graph, Windows 10 has put Window 8 in a coffin and is already outselling Windows 7. It will be interesting to see if that trend continues because we plan to offer both versions for a while.

Of course, if Windows isn't your thing, we're happy to install Linux for you as well.

*The graph shows the month (June) before 10 went on sale, the month 10 went on sale (July) and the month after (thru Aug 27). Windows 10 didn't officially become available until July 29, but we began offering Windows 10 Inside Preview about a month before the official release.