What is GPU sag and why does it happen?

If the you haven't heard about GPU sag before, here is a quick run down. A video card could start to sag due to the weight and/or length of its heatsink pulling downward on the slot it is installed in. In extreme cases, this effect could lead to the card no longer being detected, and the slot becoming unusable.

How does Puget approach the issue?

Our main concern at Puget is to do our best to ensure that a system can survive the constant bouncing and vibration from shipping with available or custom bracing solutions while also preventing a card from sagging over time. We consider both the length and weight of a card when choosing which brace to install, and we're constantly collecting data to refine our custom braces.  Here are examples of what we do to prevent damage in shipping, and also the "sag" that we talked about earlier. 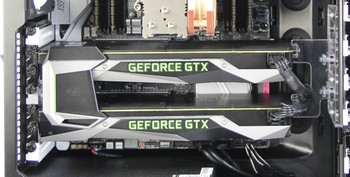 The brace in the fourth photo can be found here!

What if I built/am building my own system?

The good news is that video card sag is something that has been around for awhile. Some motherboards have the slots reinforced with a metal jacket and various universal video card braces are available online. There are also cases available as well where cards are installed vertically rather than the traditional horizontal orientation. After installing a video card, check to see if the card is sagging as it could lead to further sagging and potentially damaging the slot.

What if I have already noticed GPU sag in my system?

When a video card starts to sag it wouldn’t be a bad idea to consider available options and avoid potential damage to the slot. Some options available are bracing the card to avoid further sagging, install the card in another slot, the slot being repaired by the manufacturer, or replacing the motherboard.

Do I have to brace my GPU?

Installing a brace is optional and more of an ‘insurance plan’ to protect an investment. At Puget we value the end result and doing our best to prevent issues over time.