VFX Daily is an outfit specializing in visual effects for movies, commercials, and music videos. Josh Johnson, Owner of VFX Daily, found that he really enjoyed storytelling and computer animation dating back to when the movie Jurassic Park was released to the public. Though he graduated from a Film School in 2006, he did not study computer animation or visual effects (as those classes were not available at the time). His professional start came making training videos for General Motors, as he ran the entire show from shooting, to lighting, to editing. The experience was vital in his growth, as he decided that specific task was not something he wanted to pursue long-term.

Storytelling was a bigger passion for Josh, and that helped contribute to a fascination for visual effects. A show on Discovery Channel called “Movie Magic” helped solidify that interest even further, as it took you behind the scenes on how visual effects worked. The best education on how to get into this world was with the purchase of a computer to help him learn. After his self-taught path, he was given a shot working on the movie "Duplicity", which was a breakthrough moment for Josh.

At VFX Daily, Josh uses a huge array of tools, plug-ins, applications, and hardware to meet his needs. The main software he uses for compositing are Foundry’s Nuke & Adobe’s After Effects, Maxon's Cinema 4D, and Turbulence FD (Fluid plugin for Cinema 4D which uses the GPU as well as the CPU). Josh also uses Z Brush, SpeedTree, Photoshop, and Premiere Pro for editing as well as Mocha for Planar Tracking. As a tester for Cinema4D, he has also given presentations at SIGGRAPH for Maxon, presented for NVIDIA at NAB Show, and even taught classes on CineVersity.

With Josh's wide array of software needs, he started running into a wall when it came to processing power. While he was assigned to work as a Visual Effects Supervisor, he started realizing that his rendering times were becoming longer as his software usage began to span into different plugins and specialized applications. This became even more apparent as he performed the bulk of the post-production work on that project. His limitations forced him to render on a laptop as well as his desktop to try and save time. Josh mentioned, “at times I would be rendering on my laptop overnight, and set my desktop to render, limiting my productivity”. As much as he wanted to upgrade his previous workstation from 2013, it had limitations as far as growth as it could only support 2 GPUs, and limited RAM.

Puget Systems needed to help Josh accomplish more to suit his wide set of needs, so he asked us to build him a machine that could keep up. The speed of his configuration, combined with the new machine’s high end components began to make Josh more efficient. Our Puget machine allows him to really take advantage of the Redshift Renderer for Cinema 4D. When you have a workload like Josh, things such as boot times can be a factor in how much gets done, and Josh was pleased with how quick and ready his machine has been.

"Footage I'm cutting has been edited without the slowdown I experienced with my previous machine, freeing me to accomplish more throughout my workflow." 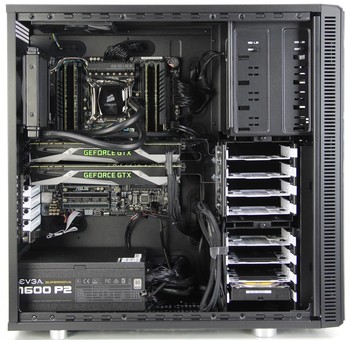 Josh picked Puget Systems because he felt like the advice he got from our consultants was genuine, he enjoyed the options we gave him, and the personal interaction with our team made it so he never felt pressured into making a purchase that he did not feel fully confident in.

If you're looking for something similar to what Josh uses, we can build a system for you too! Check out the solutions-oriented systems we provide, or contact our consulting staff to discuss your specific needs and workflow.