Skip to content
Always look at the date when you read an article. Some of the content in this article is most likely out of date, as it was written on February 19, 2021. For newer information, see our more recent articles.

Compared to Intel's Xeon W-3200 line, it isn't much of a contest. Not to mention the higher RAM capacity and PCIe lanes, Threadripper Pro is also massively faster in DaVinci Resolve. The amount varies based on which models you are looking at, but Threadripper Pro ranges anywhere from 18% to 30% faster than Intel Xeon W-3200.

Keep in mind that this is only talking about performance which really isn't the primary draw of workstation products like Threadripper Pro. The 2TB of RAM capacity may not be a factor for DaVinci Resolve, but the extra memory channels definitely do appear to improve performance. Even more important is the 128 PCIe Gen4 lanes since it is not uncommon for DaVinci Resolve workstations to have multiple GPUs, network cards, NVMe drives, and other PCIe devices in the system. 128 lanes are more than any desktop workstation is going to be able to utilize even with an EATX motherboard, which effectively means you never have to worry about how many PCIe lanes you have available when using Threadripper Pro. 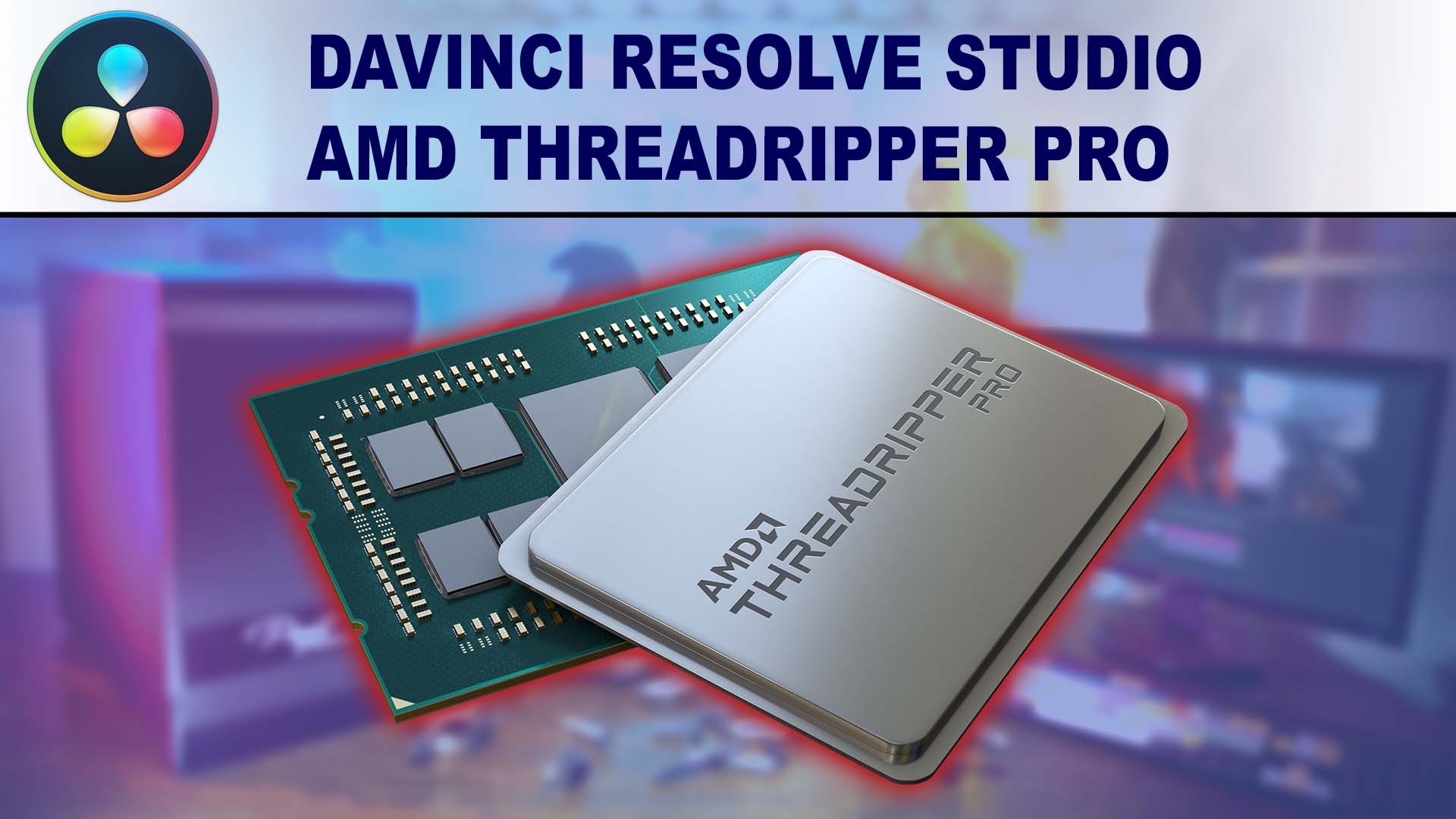 In this article, we will be examining the performance of the new AMD Threadripper Pro CPUs in DaVinci Resolve Studio compared to a range of CPUs including the AMD Threadripper 3rd Gen and Intel Xeon-W lines, as well as the AMD Ryzen 5950X. If you are interested in how these processors compare in other applications, we also have other articles for Premiere Pro, After Effects, Photoshop, and several other applications available on our article listing page.

To see how well the Threadripper Pro CPUs perform, we are primarily going to be comparing them to the AMD Threadripper (non-Pro) processors. However, we will also be including the AMD Ryzen 5950X 16 Core CPU (to act as a core-to-core comparison for the Threadripper Pro 3955WX 16 Core CPU) as well as two of Intel's Xeon-W processors to see how AMD compares to Intel's workstation CPUs. There is a higher-end processor that Intel makes (the Xeon W-3275), but we, unfortunately, did not have access to one at the time of this testing. But as you will see throughout this article, that isn't a big deal because the Xeon W CPUs do not fare particularly well versus Threadripper Pro.

While most of the specs are as similar as we can make them across each test platform, the one thing we did vary was the number of RAM sticks and whether they were Reg. ECC or not. Essentially, we used Reg. ECC when supported by the platform (Xeon W and Threadripper Pro), and matched the number of sticks to the number of memory channels supported by the CPU and motherboard. This meant using 8 sticks for Threadripper Pro (8 channel), 6 sticks for Xeon W (6 channel), and 4 sticks for Threadripper (quad channel). The only exception to this rule is the AMD Ryzen platform where we used 4 sticks even though it is only dual channel. 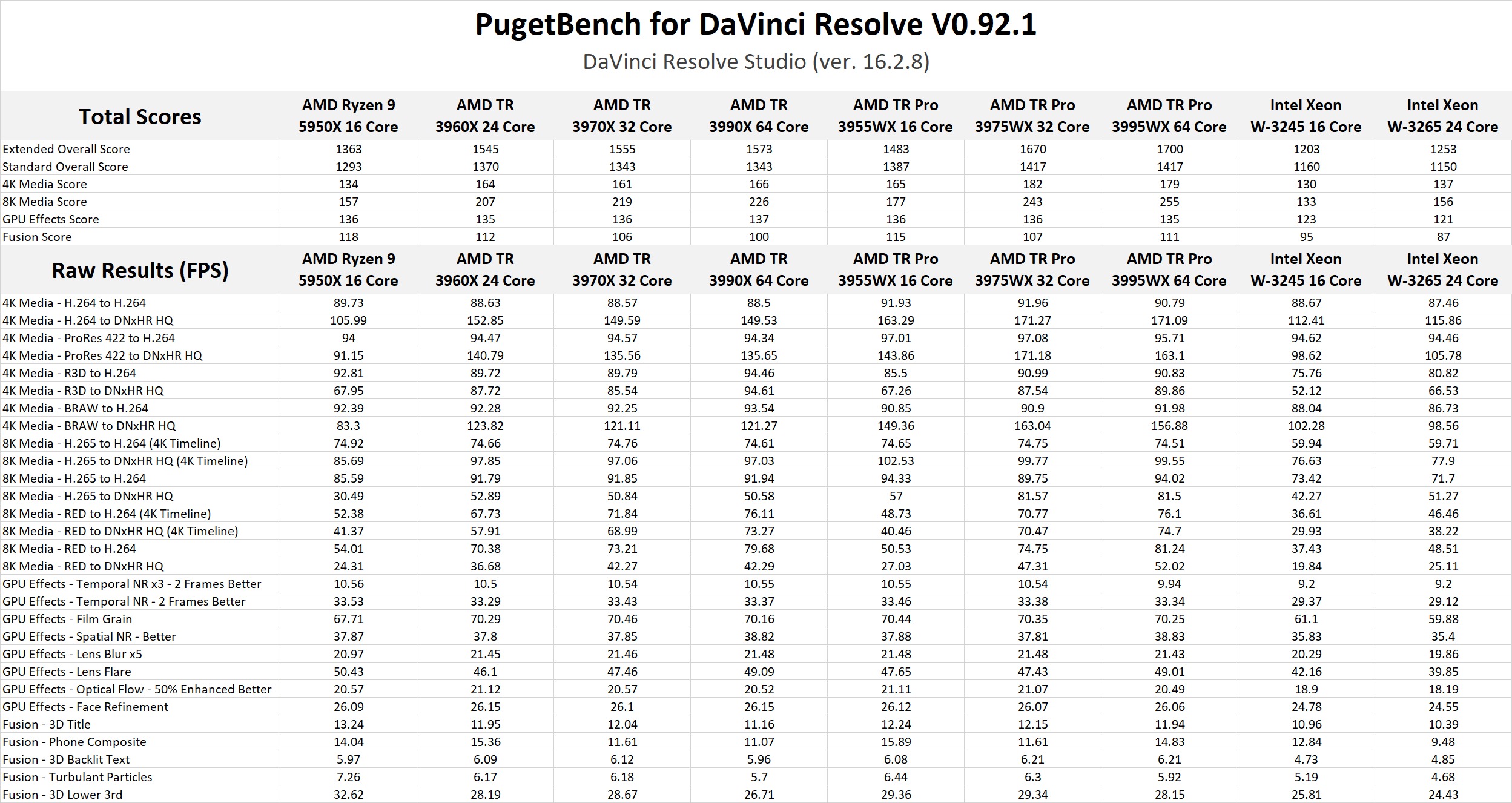 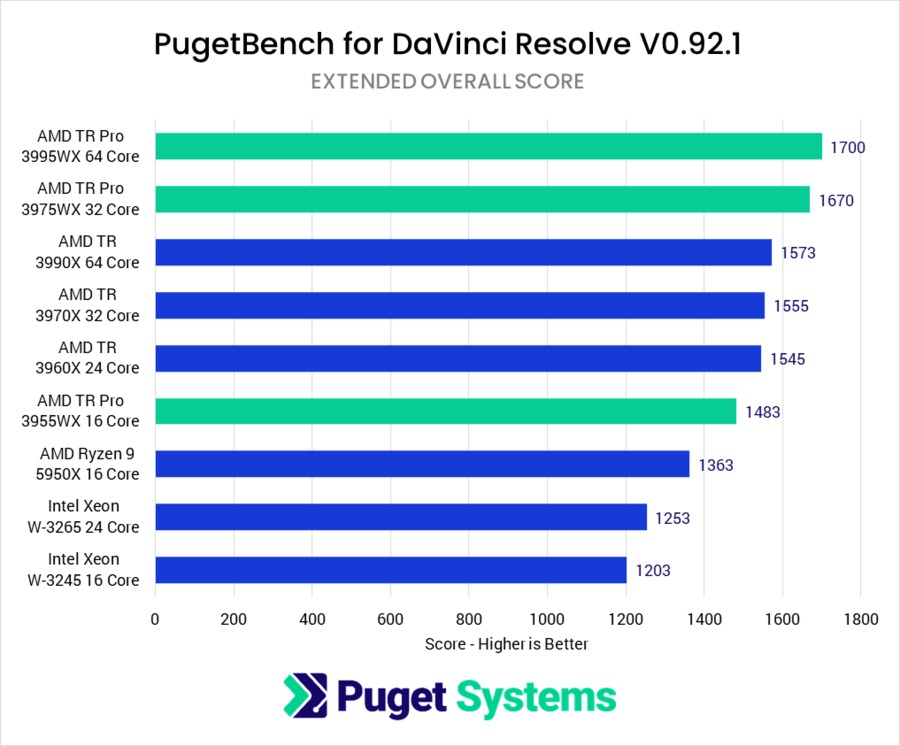 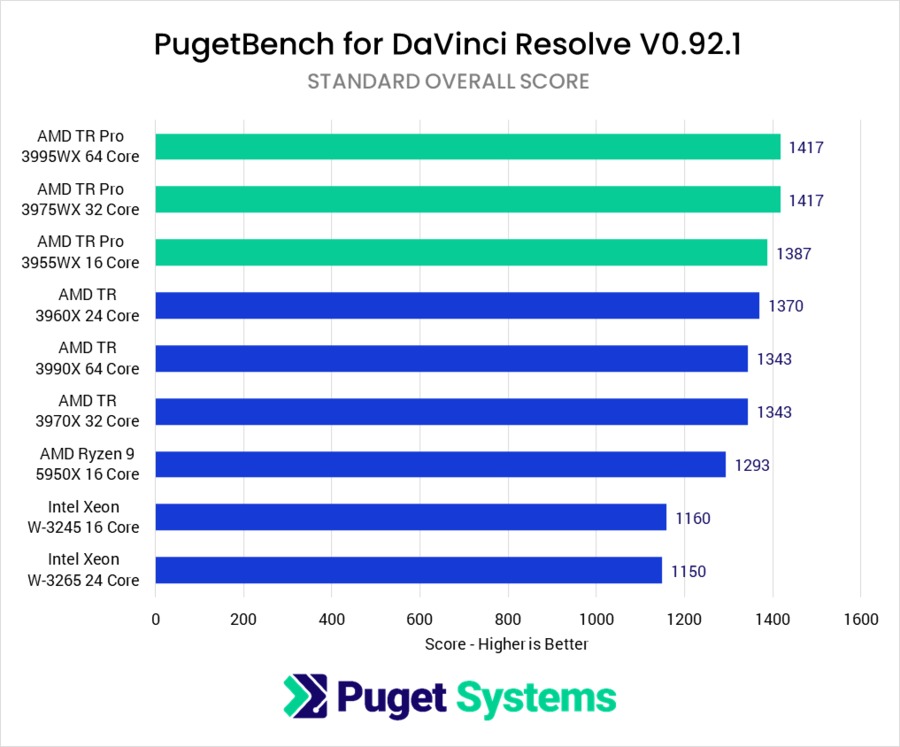 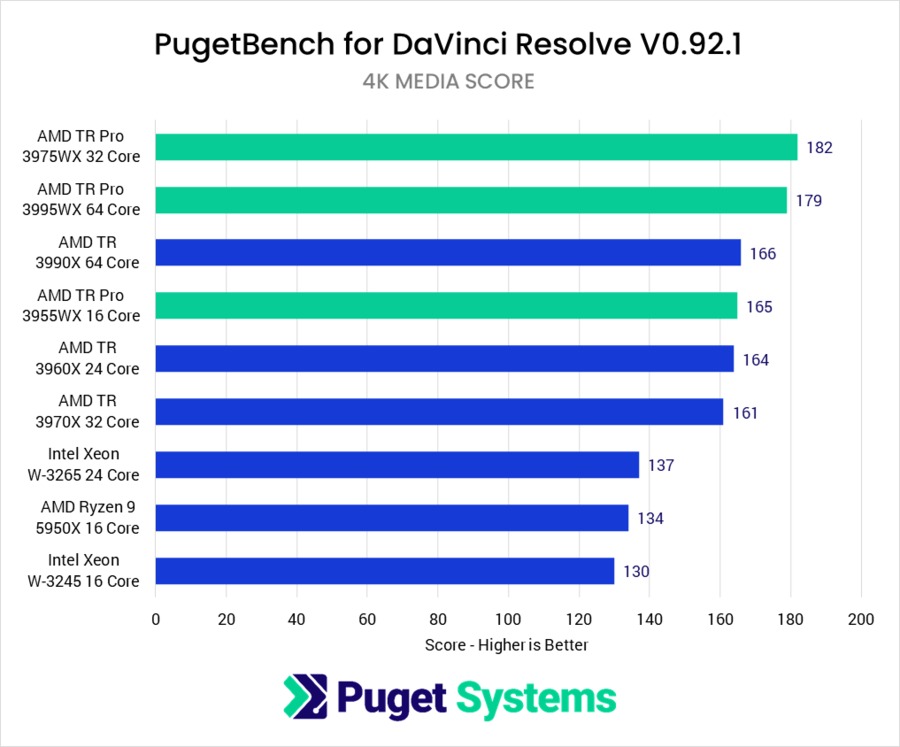 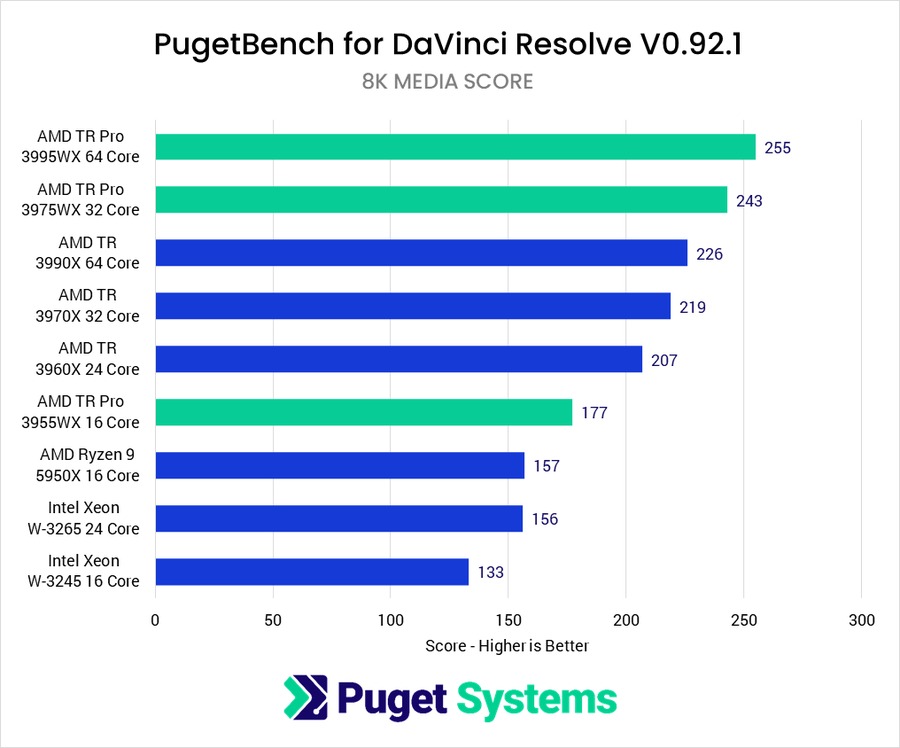 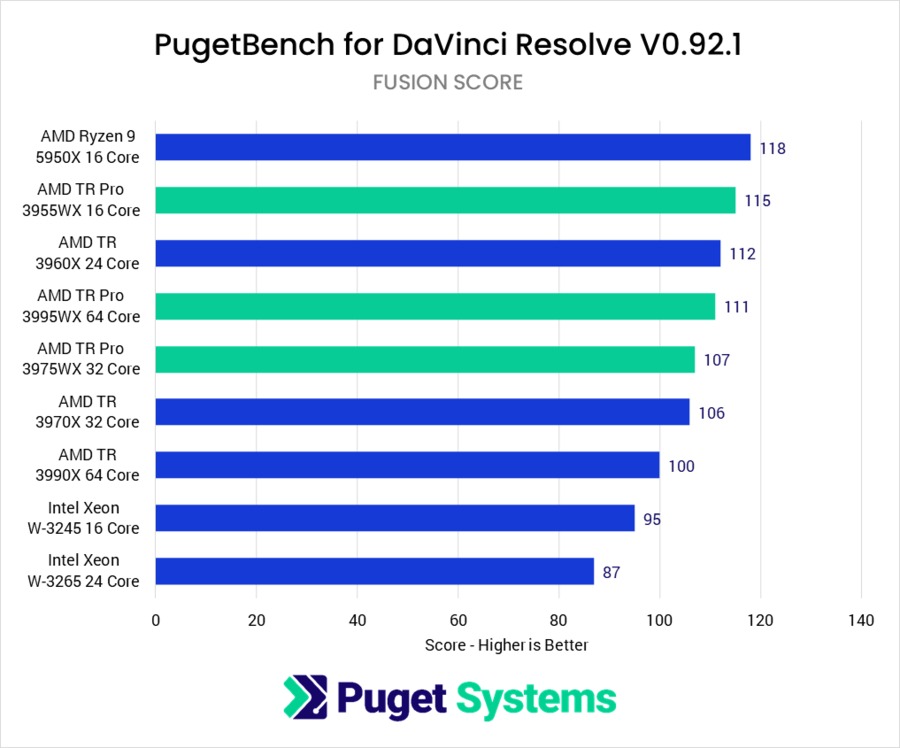 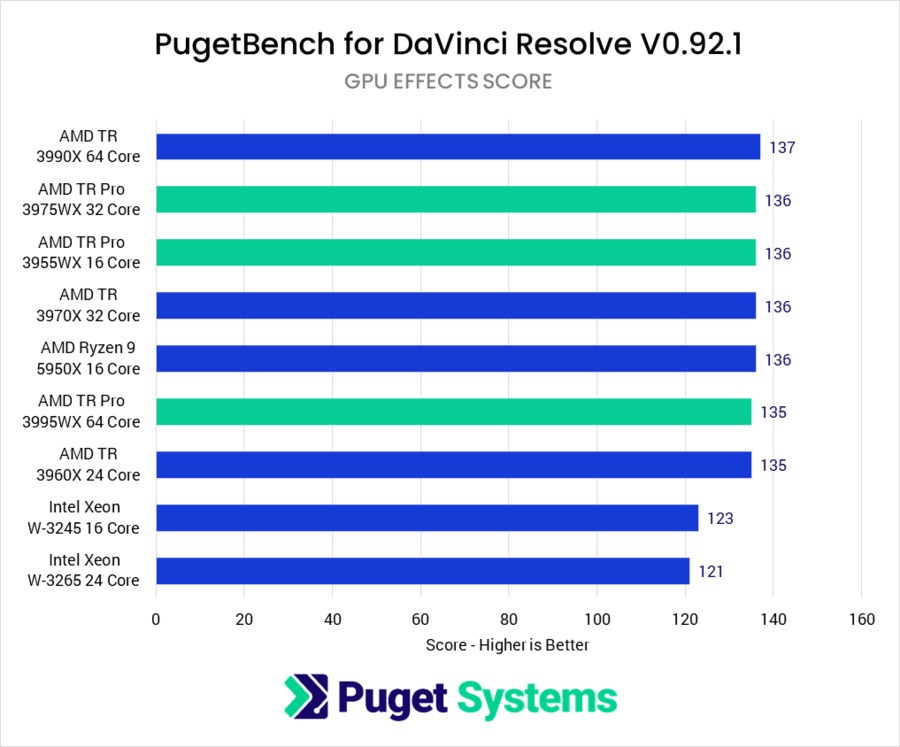 Even before starting our testing, we knew that Threadripper Pro would do very well against the Intel Xeon W-3200 processors. The big unknown, however, was how they would stack up against the Threadripper (non-Pro) processors. While Threadripper Pro does have more memory channels than Threadripper, the maximum boost clocks are a bit lower. These two factors may simply cancel each other out, or one can end up being more important depending on how the application we are testing behaves.

However, one thing we want to note is that in most of our tests, Threadripper and Threadripper Pro were actually about on par with each other. The higher overall score is largely due to a handful of tests where Threadripper Pro was greatly faster (we are talking 30-60% faster!) that pulled up the scores: 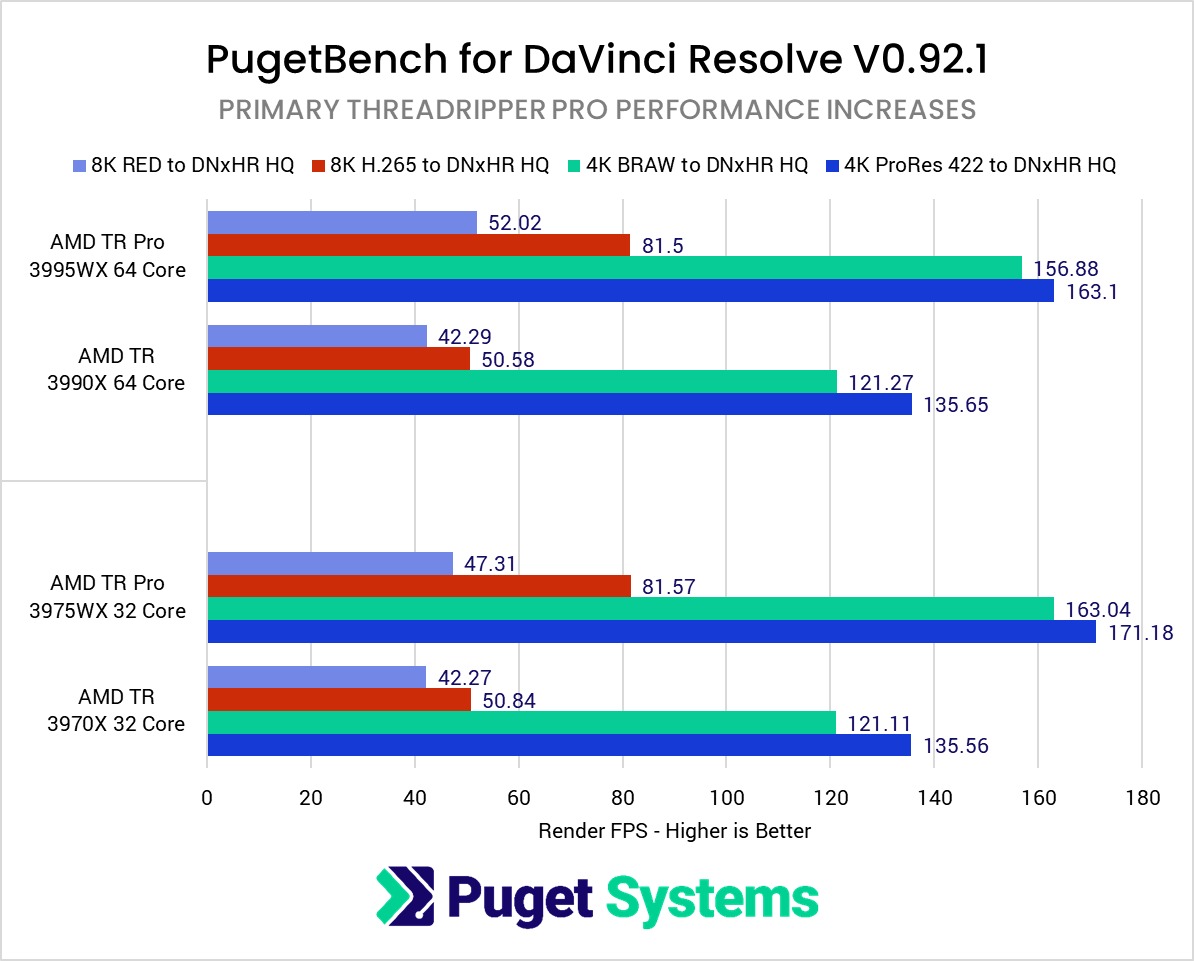 After going through the raw results in more detail, we found that there were four specific tests where Threadripper Pro greatly exceeded expectations – namely a number of the tests where we are measuring performance when rendering to DNxHR HQ. We are not completely sure why Threadripper Pro did so well on these tests, and why it only occurred on four of the eight DNxHR tests, but the results were consistent and repeatable.

On these four tests, the 3995WX and 3975WX were able to render anywhere from 12% to 61% faster than the 3990X and 3970X. It is possible that this kind of performance gain would occur in other situations if we had more GPU power in the system, but either way, this is a good sign that the extra memory channels and other "behind the scenes" improvements can make a substantial difference in DaVinci Resolve.

Keep in mind that this is only talking about performance which really isn't the primary draw of workstation products like Threadripper Pro. Higher reliability and Reg. ECC memory support is always good, and the extra memory channels can improve performance depending on the specific workload. Even more important is the 128 PCIe Gen4 lanes since it is not uncommon for DaVinci Resolve workstations to have multiple GPUs, network cards, NVMe drives, and other PCIe devices in the system.

128 lanes are actually more than any desktop workstation is going to be able to utilize even with an EATX motherboard, but it effectively means you never have to worry about how many PCIe lanes you have available when using Threadripper Pro. We only tested with a single GPU in this article, but we do have planned a round of testing to see how Threadripper Pro performs with multiple GPUs in the near future.

Keep in mind that the benchmark results in this article are strictly for DaVinci Resolve Studio and that performance will vary widely in different applications (or even versus the free edition of Resolve). If your workflow includes other software packages (we have similar articles for Premiere Pro, After Effects, Photoshop, and more), you need to consider how the system will perform in those applications as well. Be sure to check our list of Hardware Articles to keep up to date on how all of these software packages – and more – perform with the latest CPUs.