DaVinci Resolve may be known for how well it utilizes the GPU(s) in your system, but people often overlook the fact that the CPU is equally important - especially when you are doing relatively light grades. Because of this interaction between the CPU and GPU, many Resolve workstations are based around Intel or AMD's HEDT (High End Desktop) processors in order to get both high CPU performance and the ability to utilize three or more GPUs.

Today, both Intel and AMD are launching new HEDT processors that have the potential to shake things up dramatically. On Intel's side, the new Core X-10000 series processors are not significantly faster than the previous generation, but Intel has cut their prices nearly in half! For example, where the MSRP of the Core i9 9980XE was $1,979, the new Core i9 10980XE is just $979. Since these CPUs have 48 PCIe lanes, this makes it much easier to afford a platform that supports more than dual GPUs.

On AMD's side, the new Threadripper 3rd Gen CPUs are slightly more expensive than earlier models, but their raw performance is expected to be quite a bit better. In addition, they have even more PCIe lanes which should allow for quad GPU setups running at x16/x16/x8/x8. Even better, these lanes are all the newer PCIe 4.0 revision which may be a very important factor when newer and faster GPUs launch that support PCIe 4.0. 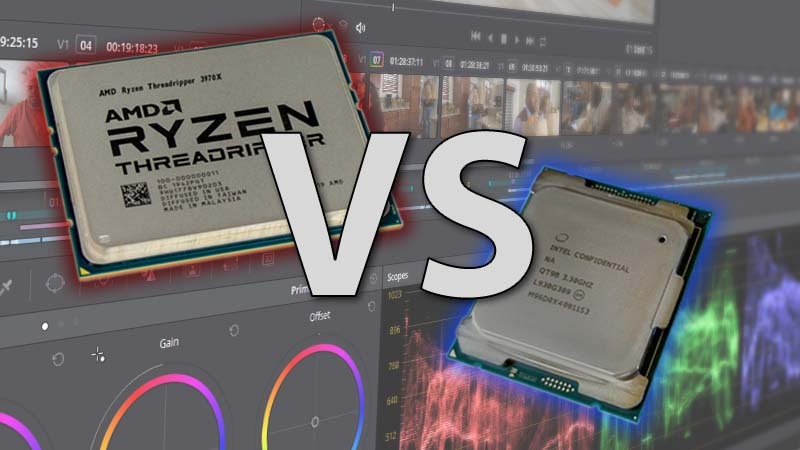 In this article, we will specifically be examining the performance of these new CPUs in DaVinci Resolve, although on our article listing page, we also have a range of similar posts examining other applications. If you would like to skip over our test setup and benchmark sections, feel free to jump right to the Conclusion.

The second thing to note is that we are using a version of our DaVinci Resolve Benchmark that is not yet released to the public. The scores from this upcoming version are actually completely interchangeable with the version you can currently download; we have just made a few usability and stability improvements. This means that you are free to download the version that is currently available to compare your system to the results in this post.

While our benchmark presents various scores based on the performance of each test, we also like to provide the individual results for you to examine if you want to. If there is a specific codec or level of grade you tend to use, examining the raw results for that task is going to be much more applicable than the scores that our benchmark calculates.

Feel free to skip to the next section for our analysis of these results if you rather get a wider view of how each CPU performs in DaVinci Resolve.

When running our DaVinci Resolve benchmark on 20 different CPUs, we end up with over 1,400 data points. This is a huge wealth of data, but that does mean that we can't possibly cover every little detail. Instead, we are going to examine things first at a broad level, then focus in on a specific test that should give you an idea of what the maximum performance gain is for each of these CPUs in DaVinci Resolve Studio.

To start off, we are going to look at the Combined Score which simply averages the results from our 4K, 8K, and Fusion test sets. Even here, there is a lot to talk about, but the most obvious thing to point out is the fact that the new AMD Threadripper 3rd Gen CPUs sit very comfortably at the top of the chart. There may not be much of a difference between the 3970X and the 3960X (only about 2%), but the 3960X is around 10% faster overall than the new Intel Core i9 10980XE.

Speaking of the new Intel X-series CPUs, the performance is actually fairly lackluster with the new models only being on average a few percentage points faster than the previous generation. They certainly are not any worse, but even the AMD Ryzen 9 3900X was able to match the Core i9 10980XE, and the Ryzen 9 3950X was actually 4% faster overall.

However, many of the more intensive tasks in DaVinci Resolve are going to be influenced more by the power of your GPU than your CPU, so we also want to take a look at one of the tests where the CPU itself should have a larger impact: basic grading of 4K media. 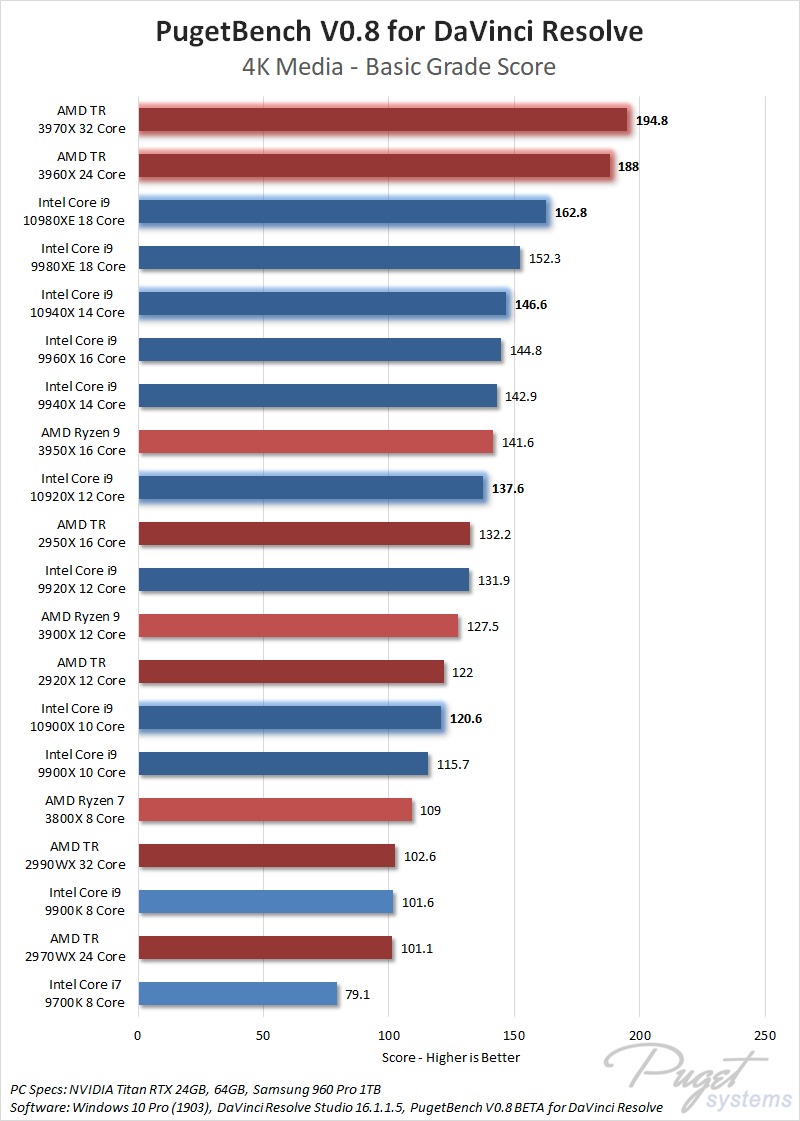 Since the performance of your CPU is more important if you are not using OpenFX or noise reduction (which are heavy on the GPU), we can see a more signficant difference between each CPU models when doing a relatively basic grade with only a handful of nodes.

On the other hand, once you get to the $500 mark - Core i9 9900K vs Ryzen 9 3900X - and below, AMD firmly takes the lead with their Ryzen CPUs handily out-performing their Intel 9th Gen counterparts.

If you are looking for the fastest DaVinci Resolve workstation, AMD's new Threadripper 3rd Gen CPUs are the clear choice. They are more expensive than the new Intel X-series CPUs, but they are up to ~15% faster and support more PCIe lanes (up to x16/x16/x8/x8) which is incredibly important for a GPU-heavy application like Resolve. In fact, these PCIe lanes are all the new 4.0 revision which, while not important with the GPUs available today, should be very beneficial in the future.

This doesn't mean that the Intel X-series CPUs don't have a place, however. The AMD Ryzen 9 3950X is overall faster (and cheaper) than even the new X-series CPUs, but the performance of the X-10000 series processors is nothing to scoff at. In addition, the fact that they support more PCIe lanes than Ryzen can make them a solid choice for users that can't quite afford an AMD Threadripper 3rd Gen CPU, but need more than dual GPUs. It is also worth noting that if you need Thunderbolt, you pretty much need to stick with Intel as there are no AMD platforms that currently have certified Thunderbolt support - and no, we don't count ASRock's Ryzen boards that are using uncertified Thunderbolt implementations.

Keep in mind that the benchmark results in this article are strictly for DaVinci Resolve and the relative performance will vary widely between different applications. If your workflow includes other software packages (we have similar articles for Photoshop, Lightroom Classic, Premiere Pro, After Effects, and many others), you need to consider how the processor will perform in all those applications. Be sure to check our list of Hardware Articles to keep up to date on how all of these software packages perform with the latest CPUs.