With the recent launch of Intel's new Ivy Bridge line of CPUs, Puget Systems has completely revamped our laptop product line to take advantage of the new improvements in technology. In addition to supporting the latest mobile CPUs from Intel, these laptops also have newer chipsets and have received significant increases in GPU power compared to previous models.

This is the first major change to our product line since the launch of Puget Labs, which gives us a great opportunity to provide much more in depth information on these new units than ever before. At Puget Systems, we understand that laptops get used for a very wide variety of applications, and that some features may be more, or less, important to one user over others. For example, one user may prize great battery life, while another wants to have the best mobile gaming laptop possible. 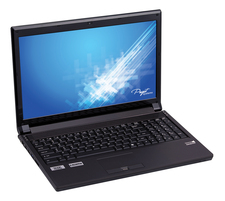 For this reason, in addition to going over the individual specifications for each of these units, we also want to provide real-world battery life estimates and thermal performance readings. High performance laptops such as these are always recommended to be used on a flat, hard surface, but we understand that sometimes you just need a laptop that you can use on the couch, on your lap, or in bed and we want to provide our customers with accurate information on how these units perform in these less ideal situations.

With all this being said, let's take a look at these new models!

We now have full videos showing you how to replace or upgrade all of the major components in each of these units. These videos can be viewed by following the "Component Replacement" links below:

On a basic component level, the Puget M550i/M750i as well as the V550i/V750i are very similar. The major difference between the 15" and 17" models are the larger screen and the larger chassis necessary to accommodate the larger screen. The V150i, however, is quite different than the other units. Instead of the 1920x1080 resolution screen of the other units, the V150i only supports a resolution of 1366x768. Due to the small physical size of the V150i, it also does not support an internal optical drive.

The chipsets used on these laptops are either the HM76 on the V-series or the HM77 on the M-series. There are a few minor features differences between these two chipsets (for example, the HM77 includes Intel Smart Response Technology, Rapid Start Technology and Small Business Advantage) but from a general usage standpoint, both chipsets can be thought of as being identical.


Externally, the available connectivity ports are very similar on all of these models. The M-series has one additional USB 3.0 port and has outputs for 7.1 audio, while the V-series only has either stereo or 5.1 audio outputs. The biggest difference between the two series lies in the available video outputs. The V-series has both a VGA and HDMI output, while the M-series has DVI, HDMI and DisplayPort outputs. With the exception of the VGA port on the V-series, all of these ports require an OS to be running in order to function.

In addition to the higher internal specifications, the M550i and M750i also feature a full size illuminated backlit keyboard. Hotkeys on the keyboard allow you to turn on anf off the backlit keyboard as well as change the brightness of the LEDs. With the control software installed and running, the illuminated keyboard is also very customizable. You can change the backlit LED color as well as choose between multiple profiles that change how the LEDs behave.

Normally we would summarize the various BIOS options available on a motherboard and point out anything worthwhile, but since laptops tend to have very limited BIOS options we are going to go ahead and show all of the actual BIOS screens. Note that these screenshots are from the V550i, which has the exact same BIOS options as the V750i. The M550i and M750i are very similar, but include a couple additional settings (we will note them on the applicable screenshots)


A few things to note is that the BIOS does not give you any options for configuring RAM timings, frequency or voltage. There is also no way to customize the fan throttling to make the unit either quieter or run cooler. This is completely normal for laptops, so this is not a problem; just something to be aware of.