The acronym RAID stands for "redundant array of independent disks", or sometimes "inexpensive disks", and really it should probably be "drives" these days since diskless solid-state drives (SSDs) are so widespread now. I guess that is what happens with an acronym that is over 30 years old, in an industry that changes rapidly and is on the cutting edge of technology.

There are many variations of RAID which are denoted by different numbers. We have an article covering that, so I'm not going to go into it in detail here, but it is worth noting that not all RAID versions actually provide redundancy... despite it being the first word in the name.

In fact, one of the most popular types of arrays in workstations is RAID 0, which is also called "striping". It takes all of the data and splits it into equal parts to be spread across each drive in the array. Not only does that do nothing to provide redundancy, it actually puts your data at greater risk because if just one drive in the array fails you lose a portion of every file, in effect destroying everything stored there.

So why do folks like it so much? Speed. By splitting things across two or more drives, you can read and write smaller amounts of data to each drive and do it in parallel (communicating with all of the drives at the same time) - which results in much faster transfer speeds.

As SSDs have gotten faster, especially with the advent of NVMe technology, the vast majority of users don't need to worry about RAID 0. However, there are still some niche applications where combining the speed of multiple, very fast SSDs is helpful - so in this article we are going to look at the current state of NVMe RAID solutions on a variety of modern platforms from Intel and AMD. 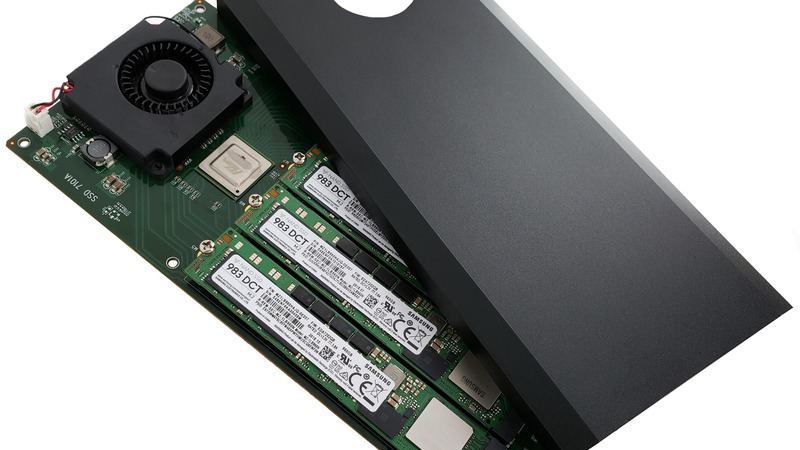 There are different ways to approach the configuration of a drive array, some purely using software while others employ hardware-level tricks either in the BIOS on a motherboard or via an add-in controller card. Those different approaches can impact both how easy it is to set up and maintain an array, as well as how fast it really ends up being. We included the following methods in our recent testing:

* Note: This is just the hardware we tried for this comparison, not necessarily products we carry or plan to offer here at Puget Systems. *

We tested these across a variety of motherboards and chipsets, in order to see how they behaved. Many chipsets have their own implementation of RAID, which is accessed differently depending on how the BIOS is set up, and there are also variations in support for features like PCI-E bifurcation - which is required for the HYPER M.2 x16 four-drive NVMe adapter to work properly.

We used Samsung 983 DCT 1TB M.2 drives for this testing, which are enterprise-grade SSDs that are certified for use with some of these RAID configurations. Our product manager, Josh, did all of the actual hardware swapping and running of benchmarks. He used ATTO's Disk Benchmark to test read and write speeds as well as IOPS (input output operations per second) on the different arrays.

The motherboards we tested on, along with which RAID implementations we tested on each one, are shown in the chart below. Unless otherwise noted, four drives in RAID 0 made up each array. Things like the specific CPU and RAM capacity in the systems don't really matter for this type of testing, though, so we are leaving those details out for the sake of keeping both this author and our readers sane.

That is a lot to take in, and we haven't gotten to any performance results yet. Please remember that we tested RAID 0 (striping) since that is the primary array type our customers request, but some of these configurations may support other RAID modes as well. We also tested all of these as secondary drives, with a separate SSD for Windows and applications. Not all of these options are bootable!

The most important takeaways from the chart above are as follows:

To start our results off, lets look at ATTO Disk Benchmark's read and write speeds. Here are the results for each platform we tested (motherboard + drive controller) across all of the RAID methods that were compatible with that platform. We opted to limit the scope of the data to results from 4KB to 4MB sizes, since the smaller results were extremely low and once it hit 4MB the sizes above that were generally the same. The results are shown in gigabytes per second, and all of the charts use the same scale (0 to 10 GB / sec).

We kept that scale and the line colors consistent across all the graphs, to make comparisons easier. You can scroll through the various graphs via the left and right buttons, or go directly to one via the thumbnails at the bottom. Their order matches the chart above.

Read speeds are up first:

And now write speeds, with the same data sizes and chart scale:

The second half of our data is the input output operations per second recorded by the ATTO Disk Benchmark. Results are broken down in the same way as the pure transfer speed tests, and line colors were kept the same as well. The units here are in K IOPS (thousands of IOPS) and in most cases we have recorded two or three significant digits of results. Due to the way Excel displays things, sometimes there is a trailing zero which can be disregarded but which I couldn't figure out a way to remove without losing precision in other places.

As before, read results are up first:

And write IOPS as well:

That is a ton of data, between both the compatibility table and performance charts, but a few trends do emerge:

It is worth remembering that all of this testing was done on Windows 10 Pro, so your mileage may vary with older versions of Windows or with other operating systems. If you have additional questions about RAID, scroll down to our FAQ section or ask in the comments.

Based on what we found in our testing, Windows 10's built-in RAID functionality is the best way to set up an array on NVMe drives today. While we focused on striping (RAID 0), with the goal of improving storage performance, Windows 10 also supports mirroring (RAID 1). That will not affect performance as much, but is an option if your concern is data redundancy instead of drive speed.

Looking for a New Workstation?

RAID stands for Redundant Array of Independent (or Inexpensive) Disks. It is a method for improving computer storage performance, and / or adding redundancy, by spreading data out over multiple drives. If want more background on what it is or the various modes it can operate in, check out our in-depth article on the subject: RAID Explained. Its an oldie, but a goodie.

How can you decide which RAID method to use?

There are two sides to this:

To pick the right hardware, you need to know what is compatible with your motherboard and the drives you want to use. Ideally, keeping the amount of different components to a minimum is best (fewer points of failure and less space taken up) but it is also important to go with reliable brands and stay within your budget. We found that a quad M.2 host card was ideal, in systems that support it properly. If your motherboard does not, then the Highpoint we tested was a little bit more widely compatible - but costs more. If you don't need a full four drives, individual adapter cards are fine too... they just take up more expansion slots in total. If your board already has some M.2 slots, however, you might need fewer M.2 adapters.

On the software side, the goal should be maximizing performance and reliability, along with ease of setup. We found that Windows 10's built-in RAID functionality was great in this regard, since it requires no additional software to be installed and it can be accessed from within the operating system. However, that means that it cannot be used for the primary (boot) drive. For most users, though, putting your OS on an array is not a good idea anyhow; simple backups are a better, more comprehensive solution.

What is the best way to configure NVMe drives in RAID on Windows 10?

Currently, Windows 10's built-in RAID functionality is the most widely-compatible and overall best-performing way to set up an array. If you have an AMD system with the X399 chipset, then their proprietary RAIDXpert is also good... but no better than Windows' RAID as long as you set the BIOS properly for each one (RAID mode for RAIDXpert, NVMe for Windows' built-in RAID).

There is some CPU overhead involved in using Windows RAID, but in our testing we found it to put a smaller load on the processor than Intel's VROC. With most modern CPUs it should have very little if any discernable impact on overall performance.

How do you set up RAID on Windows 10?

To set up two or more drives in RAID within Windows 10 Pro:

If you need a more in-depth walkthrough, this page has a good guide. It focuses on mirroring, but the setup for striping is similar.

The built-in RAID functionality we looked at in this article is only available on Windows 10 Pro, not Home. Other RAID methods (motherboard or add-on card solutions) may work on Windows 10 Home, but we recommend Pro as a better overall platform and do not offer Home on our workstations here at Puget. For simple redundancy on Windows 10 Home, check out Storage Spaces.

Is Windows RAID the same as Storage Spaces?

Storage Spaces is different and separate from Windows RAID. It is a newer multi-drive array option, focusing more on redundancy and not on performance. It supports mirroring and parity, but lacks any striping option. It is accessible from withing the Windows Control Panel. If you want to know more, just search online for "Windows 10 Storage Spaces" and you should find plenty of info.

Does Puget Systems offer RAID on workstations or servers?

RAID is something we offer at customer request, within a limited range of options based on the hardware in a given system. Our policies change over time as we test functionality on new motherboards, controller cards, drives, and operating system versions.

Currently, as of this writing, we support:

If you are interested in getting a Puget workstation or server with RAID, please contact us to determine the best option for you.