Whenever a new product is launched, the main question everyone wants answered is exactly how well they perform in the specific applications they use. In the case of video cards like the NVIDIA GeForce GTX 1080 Ti, there are plenty of reviews available online but the majority focus on gaming and only perform token (if any) testing for professional applications like Premiere Pro.

To help you decide if the GTX 1080 Ti is a good choice to use in your Premiere Pro workstation we will be comparing it to the GTX 1070, GTX 1080 and Titan X video cards in a variety of tasks: 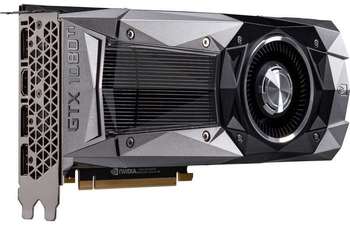 If you would like to skip right to the conclusion section to see our final thoughts on the GTX 1080 Ti, feel free to do so!

To see how the new GTX 1080 Ti performs in Premiere Pro, we will be testing with the following hardware:

Our base test platform uses some of the best hardware for Premiere Pro including the Core i7 6950X CPU and 128GB of RAM. For storage, we will be using just a single Samsung 960 Pro 1TB NVMe drive. Be aware that based on our Premiere Pro Storage Optimization testing, we typically recommend having at minimum one separate SSD for your media cache and scratch files as that greatly improves the time it takes to import media, conform audio, and generate peak files. However, since we are not testing those tasks in this article (because they are not GPU accelerated) we opted to stick with a single drive to cut down on the number of hardware variables that might affect our results.

While we will not be testing any particularly low-end video cards, we will be comparing the GTX 1080 Ti to the GTX 1070, GTX 1080, and Titan X video cards. Originally we were not going to include the GTX 1070, but since that is a very common card used in our Premiere Pro workstations we decided it was worth the little bit of extra testing time to include.

To test exporting and rendering previews we used a moderately complex timeline involving multiple clips, Lumetri Color correction, multicam footage, and some other effects like a logo overlay, gaussian blur and cross dissolves. If you want a more in-depth look at what our timelines look like, we recorded a short video explaining our test process:

Rendering previews is something that you hope to never have to do since it can interrupt your workflow, but if you do complex editing it is often unavoidable. Because of this, being able to render previews as quickly as possible can be an important part of an efficient Premiere Pro workstation. 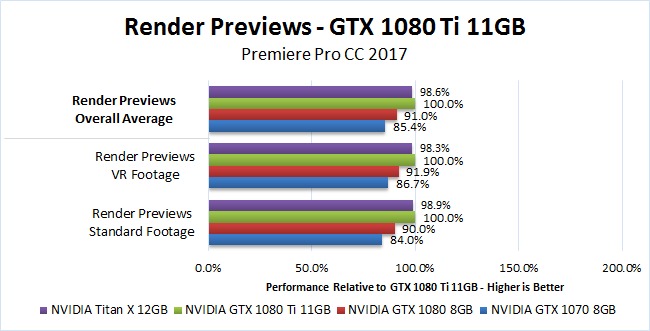 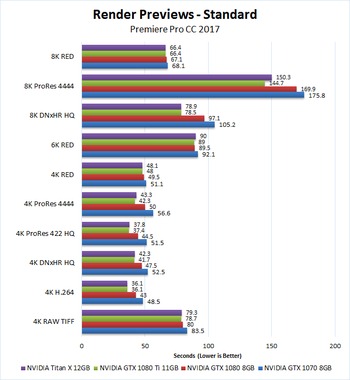 Overall, the results were fairly consistent between our standard and VR footage testing, but there was some variation between the different codecs and resolutions we tested. This means that if you happen to primarily use one of the codecs we tested, we would recommend that you look at the individual result rather than the average.

Since there is a huge variety of resolutions and codecs you might export to, it simply isn't possible for us to test every possible combination. However, what we can do is to make sure we touch on the more common combinations as well as the ones we believe will be more widely used in the future. Because of this, we tested exporting to 1080p, 4K, and 8K using H.264, H.265, and DNxHR HQ codecs. Our source footage also uses a range of codecs including H.264, RAW TIFF, ProRes 422HQ, ProRes 4444, DNxHR HQ, and RED.

In addition, since VR has been gaining steam we also wanted to include some testing covering exporting VR projects to 4K H.264 from a variety of source codecs. 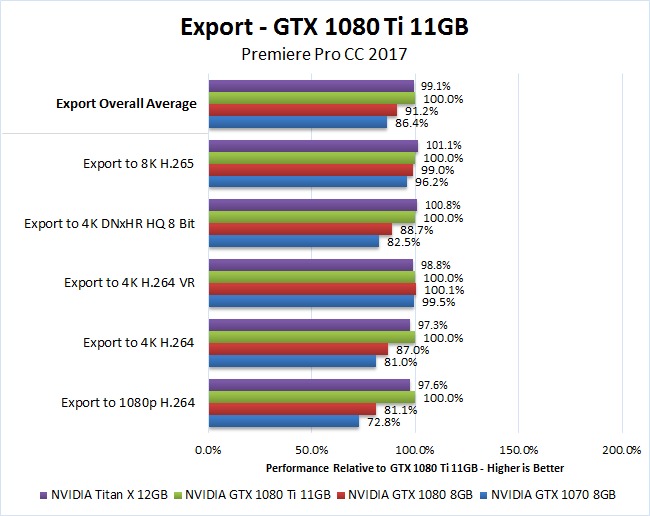 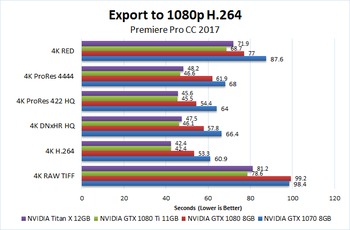 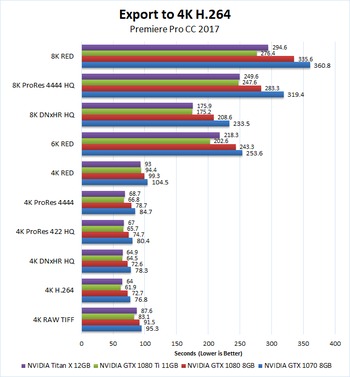 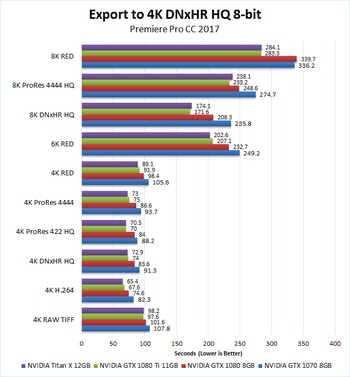 Our results when exporting are very interesting because at times (such as when exporting to 1080p) the GTX 1080 Ti is awesome -coming in at almost 20% faster than the GTX 1080. However, in other cases (like exporting to 8K H.265 or 4K H.264 VR) we didn't see much of a performance difference between any of the cards we tested. This is likely due to the fact that in those situations we are limited not by the performance of the video card but rather by something else in the system - most likely the CPU. In those cases, having a more powerful video card doesn't really help since there is a performance bottleneck elsewhere in the system.

While our testing of the GTX 1080 Ti in Premiere Pro was very extensive - covering nearly 45 benchmarks with various footage resolutions and codecs - the results are so straight-forward that our article turned out fairly short. In fact, we can sum it up very easily in a single sentence:

In fact, if you check out our Premiere Pro Recommended Systems you will notice that we have already dropped the Titan X completely from the configuration pages and replaced it with the GTX 1080 Ti. Of course, we can still offer the Titan X by request, but since the GTX 1080 Ti is both cheaper and faster than the Titan X we don't anticipate having to do so very often.