With the recent flooding in Thailand causing platter hard drive shortages (see our blog post for more information), many in the computer industry consider this to be the ideal time for SSDs sales to start to take off. While the launch date of the new Intel 520 (codenamed Cherryville) solid state drives has been planned since long before the flooding occurred, this is the prime time for Intel to make a push on SSD sales.

With solid state drives, and traditional drives to a lesser extent, there are four main factors to consider when choosing the right drive: price, size, performance, and reliability. While some other brands may boast slightly faster speeds, we have always placed a premium on reliability when deciding what products to carry - and in our experience, Intel by far has the best reliability of any brand we've used.

Traditionally, SSDs are very, very fast but also have relatively small storage capabilities and are quite pricey. The new Intel 520 drives should be a bit faster than the 510 line they are replacing as well as being roughly $30 cheaper. It's also worth noting that while the 510 series was only available in 120GB and 250GB sizes, the 520 series will be available in several capacities from 60GB all the way to 480GB.

The Intel 520 series will be the first Intel SSD drives to use a Sandforce controller (specifically the SF-2281VB1-SDC). Sandforce is very highly regarded in the SSD community, but what this will mean in terms of reliability will be unknown until the drives have been out for a while. The entire 520 line utilizes the SATA 6Gb/s interface and according to Intel has a 5 year minimum useful lifespan with up to 20GB a day written. The drives will be available in sizes of 60GB, 120GB, 180GB, 240GB and 480GB.


Hard drive speed is most commonly measured in two units: MB/s and IOPS (Input/Output Operations per Second). Intel states that the performance of the entire line is up to 550 MB/s (or 40K IOPs) read and up to 520MB/s (or up to 70K IOPs) write. With most SSD drives, the speed is heavily dependent on the size of the drive itself with larger drives greatly outperforming smaller drives, so these performance numbers will likely only pertain to the larger drives. Manufactures also tend to list idealized performance speeds that will not often occur in a real life scenario. It is not just Intel that does this, but rather a standard in the hard drive industry that many consumers may not be aware of.

For this reason, we got our hands on one of each size of drive from the new 520 series and ran them through our own set of benchmarks to find the actual real world performance numbers for these drives.

For our testing, we used the following hardware:


Each SSD drive was configured as a secondary storage drive with CrystalDiskMark used to benchmark each drive. The benchmark was run 3 times with the highest overall score chosen as our final result.

When dealing with results from five different drives, there is a lot of data that needs to be sorted through. For that reason, we will present the data in two forms: a table with all the data at once and graphs showing the data from each individual test. So first up, here is all of our data in table form:


Now, this table may not be very easy to read due to the sheer amount of data, so let's go through each test one by one: 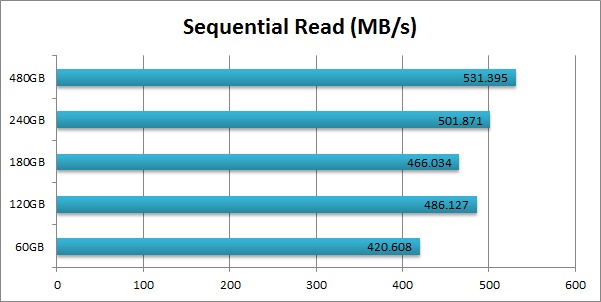 Starting with the sequential read performance, we see results close to the advertised "up to 550 MB/s" on the 480GB drive. The rest of the results fall pretty much where we expect them to be when you factor in the size/performance ratio except for the 120GB and 180GB drives. Depending on how you look at it, you could either say that the 180GB drive underperforms or that the 120GB performs better than expected. 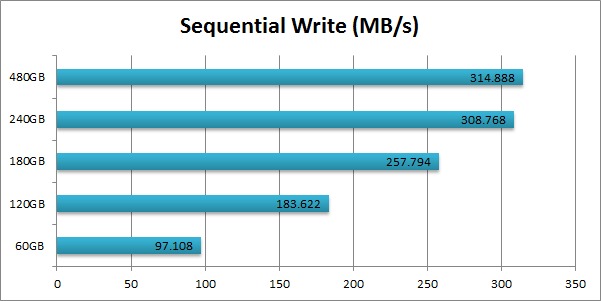 Unlike the sequential read, the sequential write performance is nowhere near the advertised "up to 530MB/s". This could be caused by many different factors include our SATA controller or our benchmark utility itself. Looking at our benchmark results, there are a few things to point out about the results. First, the 60GB drive really underperforms compared to the larger drives coming in at only 97MB/s. Second, the difference between the 240GB and 480GB drives is very small and is within our margin of error for hard drive benchmarking, so they can essentially be thought of as having the same sequential write performance. 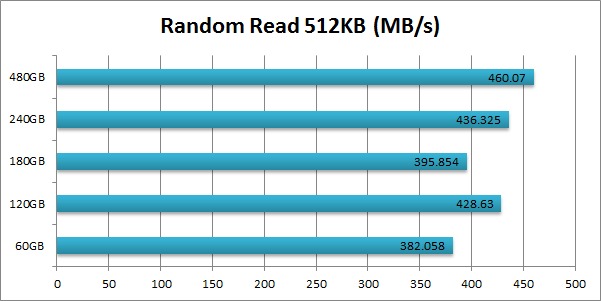 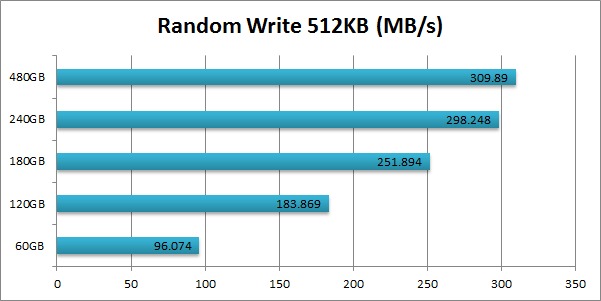 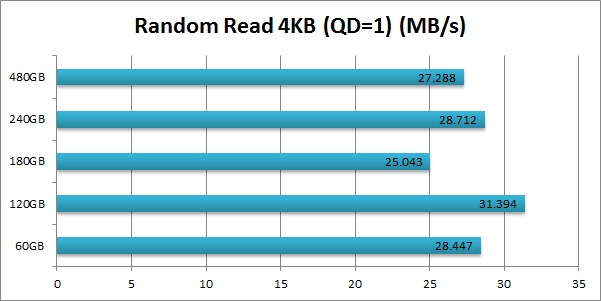 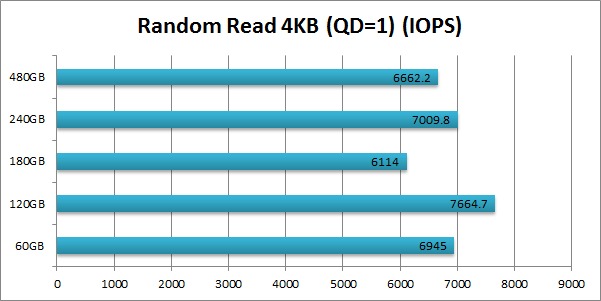 For all of the proceeding benchmarks, we will be looking at the results in both MB/s and IOPs (input/output operations per second). The results are essentially the same, just presented in different units of measurement.

Lowering the file size to 4KB and introducing a queue depth into our benchmark brings about some very interesting results. The 180GB drive continues to underperform slightly from what we expect, but the 120GB is by far the fastest out of this batch. 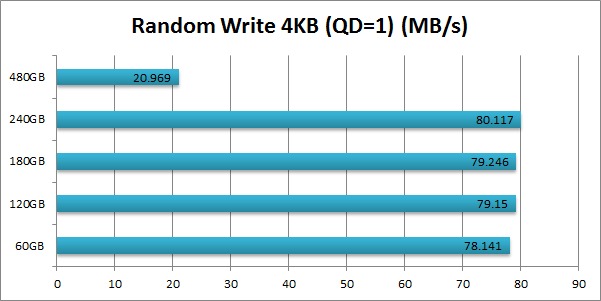 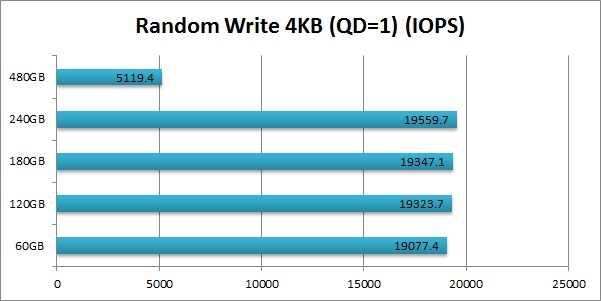 The write portion of the previous benchmark also gives us some interesting results. Pretty much all of the drives are equal in performance except for the 480GB drive. While we cannot say why the 480GB drive gets such bad results on this benchmark, we can say that we double and triple checked the results to ensure that there was not something wrong in our testing that caused the low performance. 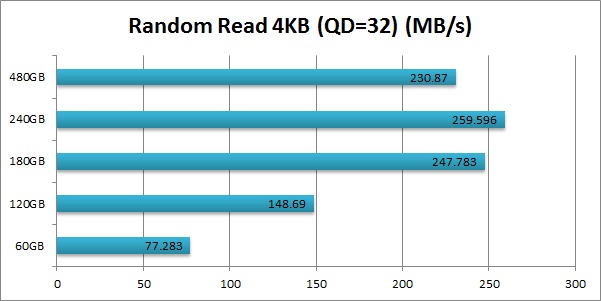 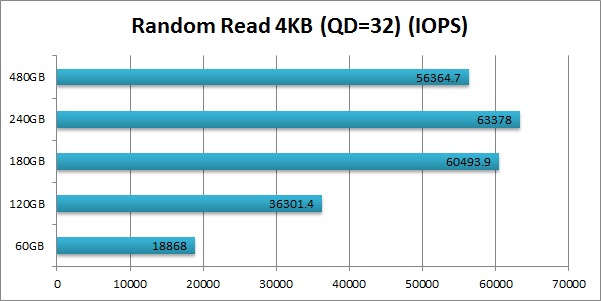 Increasing the queue depth to 32 brings our results a bit closer inline to what we expect, although the 480GB drive is still slightly underperforming relative to the other four drives. 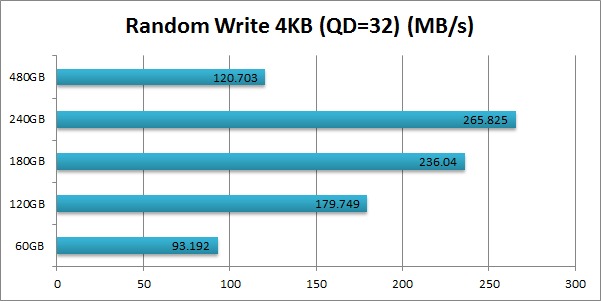 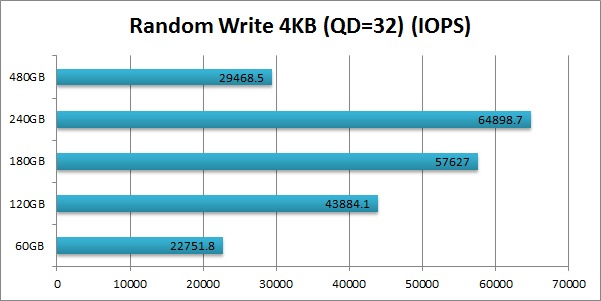 And finally, the random write test with 4KB files and a queue depth of 32 gives us about the same results that we now expect with the 480GB drive underperforming and the other drives performance in line with their storage size.

While some of the benchmark results from the 480GB drive might appear to be a major problem, you need to keep in mind that the performance of that drive was only a problem when writing large numbers for small files while using a queue depth. This may occur in a server environment, but most users looking to use this drive in a standard system will likely not see any performance issues. The 180GB drive on the other hand was a bit of a hit and miss with the read performance consistently lower than the 120GB drive.

While the size of the drive is likely be the largest factor when deciding which SSD to purchase, we have to say that the 60GB, 120GB and 240GB were the most consistent throughout our benchmark results. The 60GB drive was overall the slowest drive we tested, and it may not be enough space for some users (Windows 7 alone can take up to 40GB depending on the size of your RAM), so it is certainly worth talking to one of our sales representatives before making your purchase to ensure that the drive is right for your needs. If absolute speed is the main factor in your purchase, we recommend either the 240Gb or 480GB drive depending on what you will be using it for. Gaming, 3D modeling or photo editing should be slightly faster with the 480GB drive, although some server-class systems will likely want to stay with the 240GB drive due to the low 4KB read/write scores we saw with the 480GB drive.