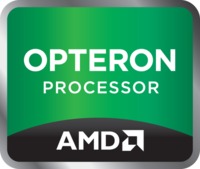 AMD has just launched their new Opteron 6200 series of processors (codenamed Interlagos) based on the recent Bulldozer architecture. Featuring an increase in cache size, up to 16 cores per CPU, a new 32nm manufacturing process and Turbo Core support - Interlagos should have many performance advantages over its predecessor. These CPU's continue to use the same G34 socket so this launch is only a CPU refresh, not a full platform refresh. To start this article off, lets take a look at what products are available at launch.

At launch, there will be ten different Intelagos processors available. The specifications for the ten CPU's are below:


Overall, the stock frequencies are a bit higher than the previous 6100 series, and the addition of Turbo Core should give a nice boost to the performance of these processors. Note however that the 4-core 6204 CPU does not support Turbo Core at all. Total L2/L3 cache and the maximum number of cores have also increased - but we will cover that more in the next section.

Below is a quick breakdown of the features of the 6200 series of processor versus the previous 6100 series:


As you can see, the 6200 series has increases nearly across the board, with only the HyperTansport Technology and the socket not changing. All of the increases will have a positive impact performance, including the smaller manufacturing process. Although the process technology does not directly affect performance, it is what allows more cores to be fit onto the same physical space. A smaller manufacturing process also results in lower temperatures, which in turn gives the processor more thermal headroom.

This thermal headroom can be taken advantage of with AMD's Turbo Core Technology which allows the processor to automatically overclock individual cores as long as it can stay below a thermal and power threshold. This is the first time that AMD has included this technology onto their Opteron series of processors, and should provide a nice boost to performance when the system is under a heavy load.

The technicalities behind this technology are very complex, but what it comes down to is if an application is causing a heavy load, the processor can overclock the cores that are in use. Depending on the number of cores being used (more cores means less overclock per core) and the thermal/power headroom, this overclock can be nearly as high as 1Ghz, which can give a very noticeable performance boost. 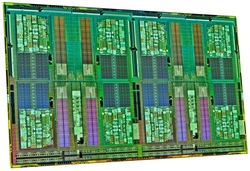 After reviewing the specifications for these new processors, it is clear that the new 6200 series has many excellent improvements over the previous 6100 series. Even though the names of both series is very similar, the 6200 series is based on an all new architecture (Bulldozer) and offers numerous performance advantages.

Overall, we see no reason to continue offering the previous 6100 series of processors, and will be completely overhauling our line to include only the new 6200 series. The only reservation we have is that most of these processors have a thermal output of 115W, which is much higher than the 6100's average of 80W. These CPU's will require a bit more cooling, so the system will end up being slightly louder as the fans will need to run at a higher RPM.

The sheer number of different processors available is slightly overwhelming, so if you are in the market for a server and want some advice on which product is right for you, feel free to email any questions to our Puget Systems team at info@pugetsystems.com