While Intel’s per-core performance improvements do have noticeable impacts when compared to the 10th Gen, they still lag behind the Ryzen CPUs with the same core count or price. Only one Intel CPU managed to outperform an equal Ryzen CPU, but only in one specific test. Otherwise, AMD outperformed Intel across the board, often at a lower price point.

Unreal Engine is an application that will leverage as many CPU cores as you throw at it. As such, Intel only offers up to 8 cores, while Ryzen also has 12 and 16 core options that significantly outperform anything Intel has. The Z590 platform also has improvements over the Z490, such as PCIe Gen4, but again, those improvements are putting them on par with what AMD has been offering for a while.

The majority of CPU-bound tasks in Unreal Engine, such as compiling shaders, or building lighting, benefit greatly from having a lot of CPU cores available. While most of our customers lean towards the higher-end AMD Ryzen or Threadripper, there are still plenty of Unreal users that may not be working with that many shaders (for example, a filmmaker using Unreal for previsualization) and want a less expensive setup but still know they are getting the most out of their budget. 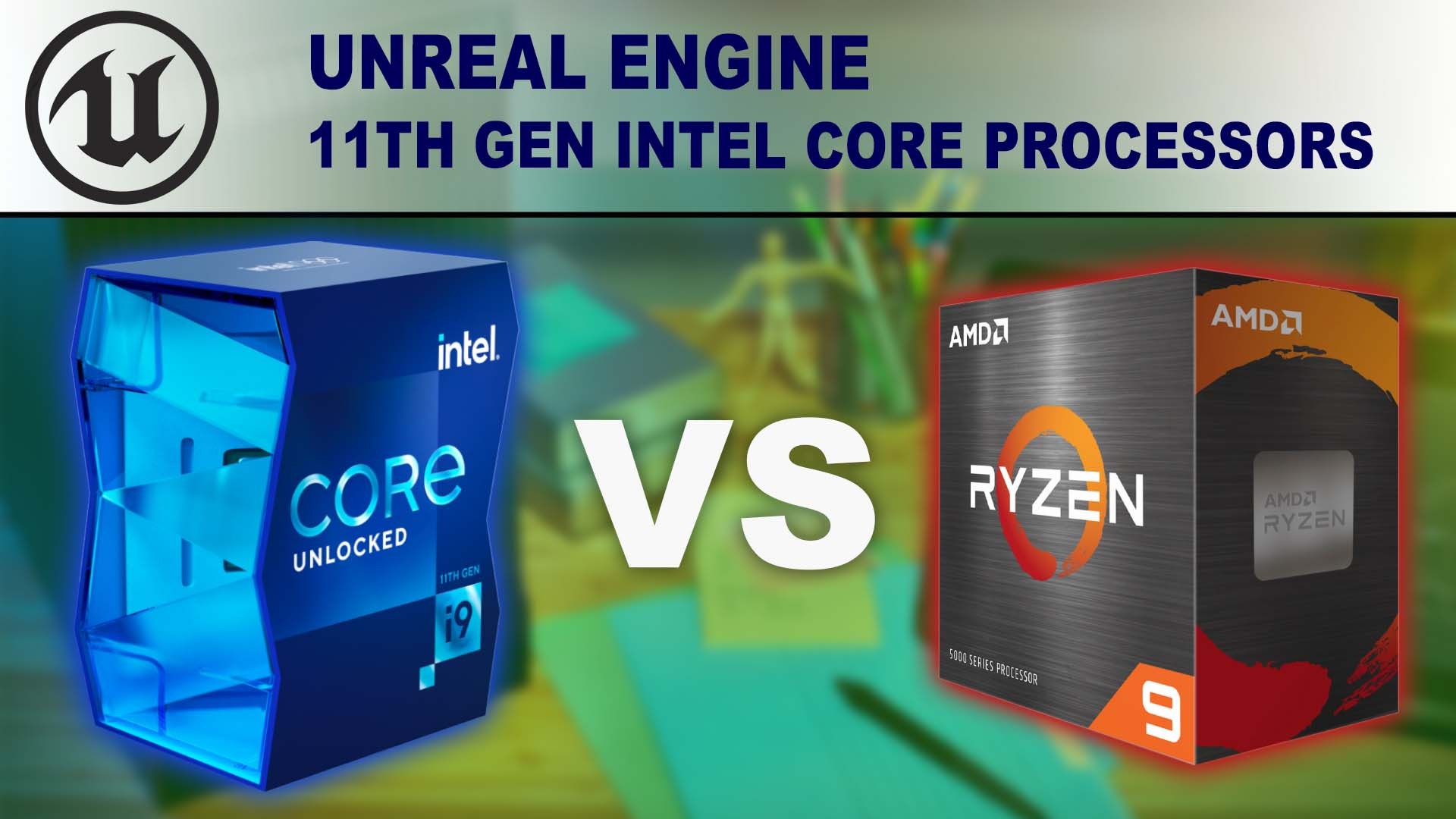 For this article, we’ll be investigating the CPU performance of these new 11th Gen CPUs versus the previous generation as well as AMD’s Ryzen line. We’ve left out the AMD Treadripper CPUs as they are in a league of their own.

Also, while not covered in this testing, the new motherboard chipset, Z590, also offers some nice features, such as PCIe Gen4. This puts Intel on par with what AMD’s Ryzen line has been offering. We will have a specific Z490 vs Z590 article up later once we have some time with the new motherboards.

Second, the power limit settings that the motherboard and CPU are using to determine what frequency to run the CPU at under load is extremely muddy with the 11th Gen CPUs. There are the Intel "stock" settings, but also what are essentially overclocked settings that allow the CPU to maintain higher turbo limits for longer periods of time in exchange for dramatically increased CPU power draw and temperatures. The idea is that these power limits allow systems that have sufficient cooling to run the CPU at faster speeds, but we still have a lot of work to do to determine exactly what power limits we feel are safe for our workstations. For now, we opted to stick with the default on the Gigabyte Z490 board we are using, which is to run with the higher power limits. This will give Intel a bit of a boost in terms of performance, however, which is worth keeping in mind when examining the results.

This test isn’t specific to Unreal Engine but is common enough amongst game developers and machine learning development to include it in this round of testing. For this, we used the “Release” branch (version 4.25) from GitHub and compiled it in Visual Studio 2019. 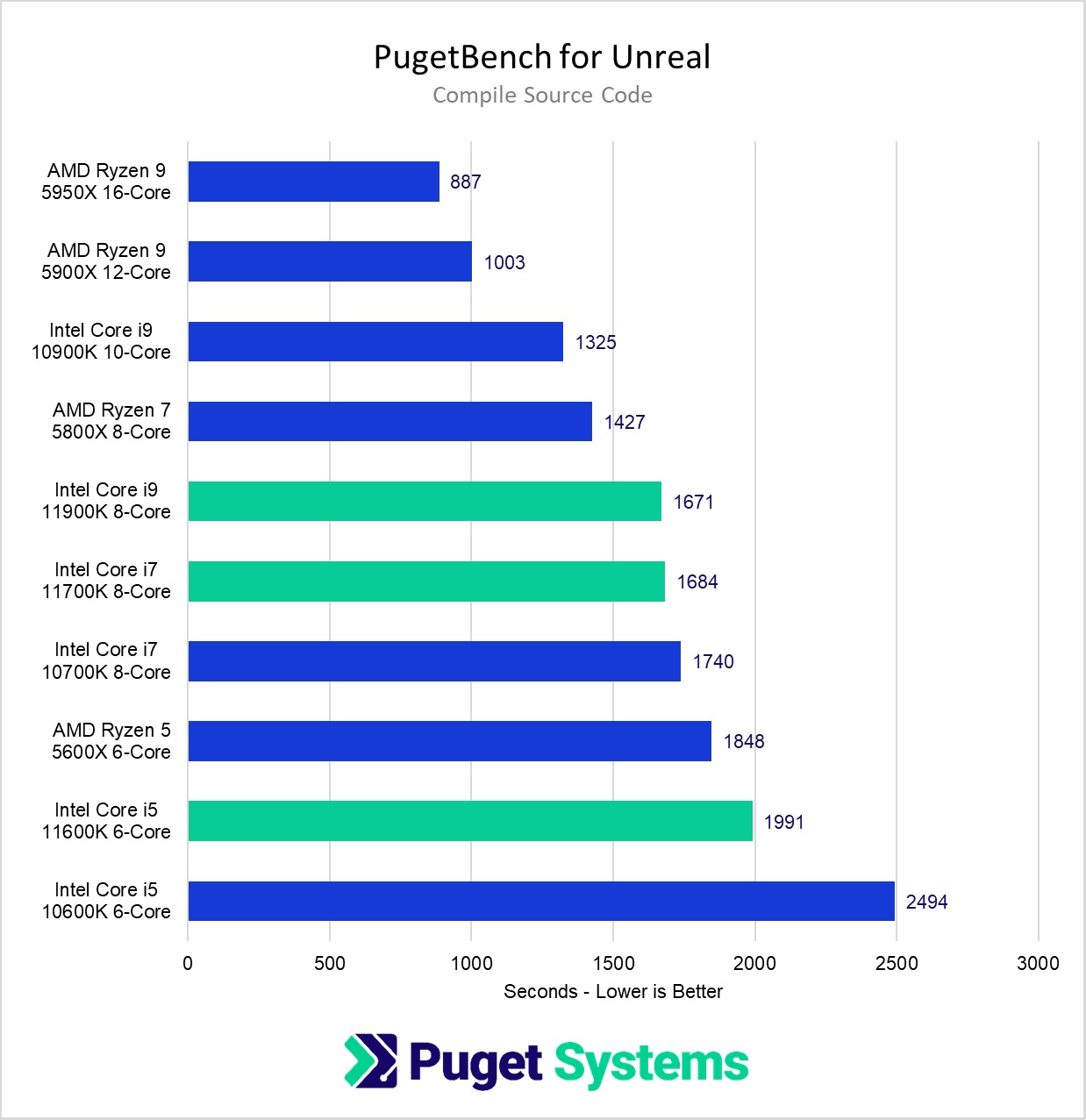 While more and more Unreal users are turning to Unreal for its real-time lighting features, traditional rasterized rendering still has a lot of use. Anyone that has used Unreal for a while can attest to how much time is spent waiting for lighting to be rebuilt. For this test, we used “Medium” lighting quality in the “Virtual Studio” project from Epic. Also, note that GPU Lightmass is now available, but for this test, we are focusing on the legacy CPU baking. 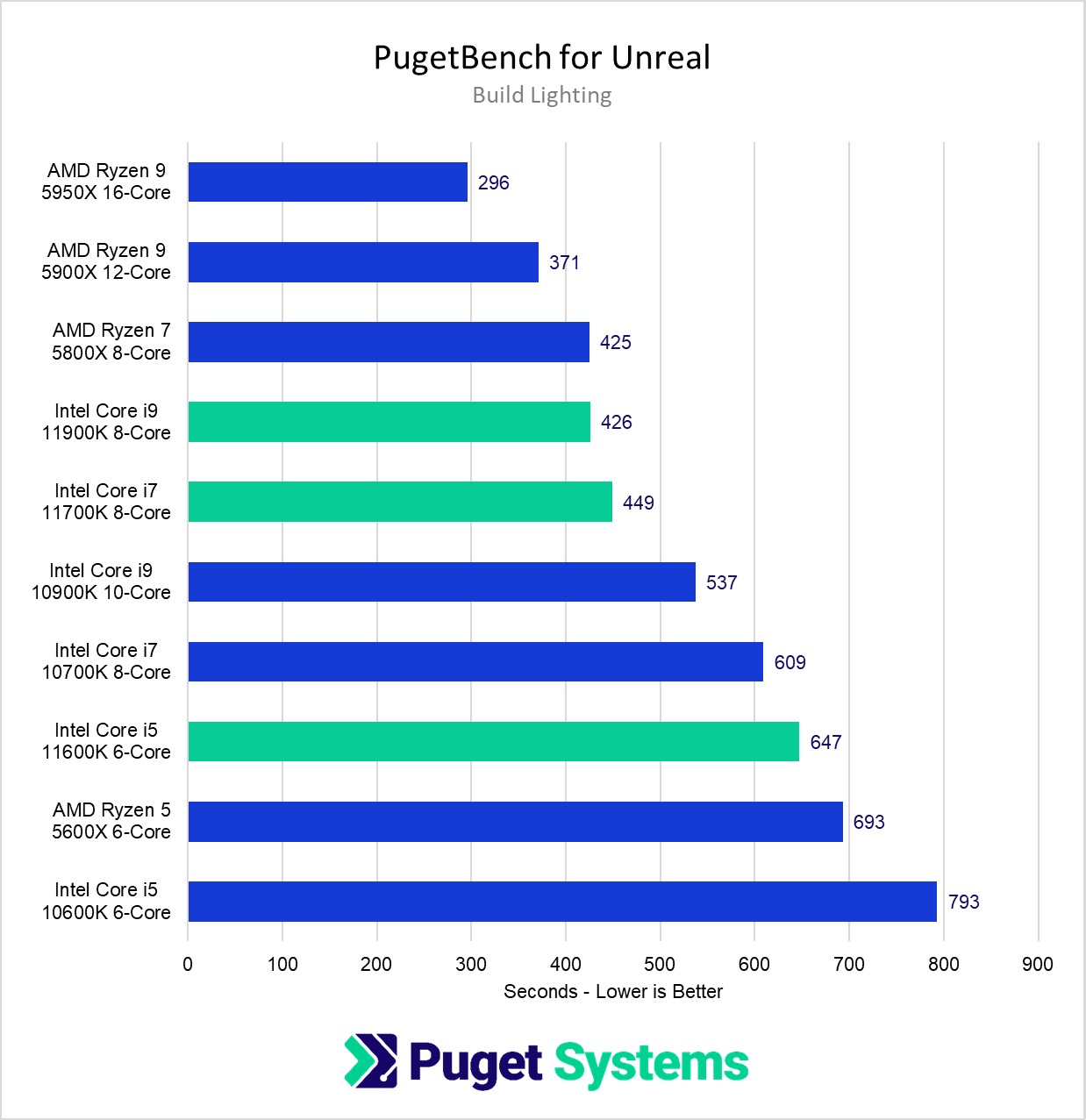 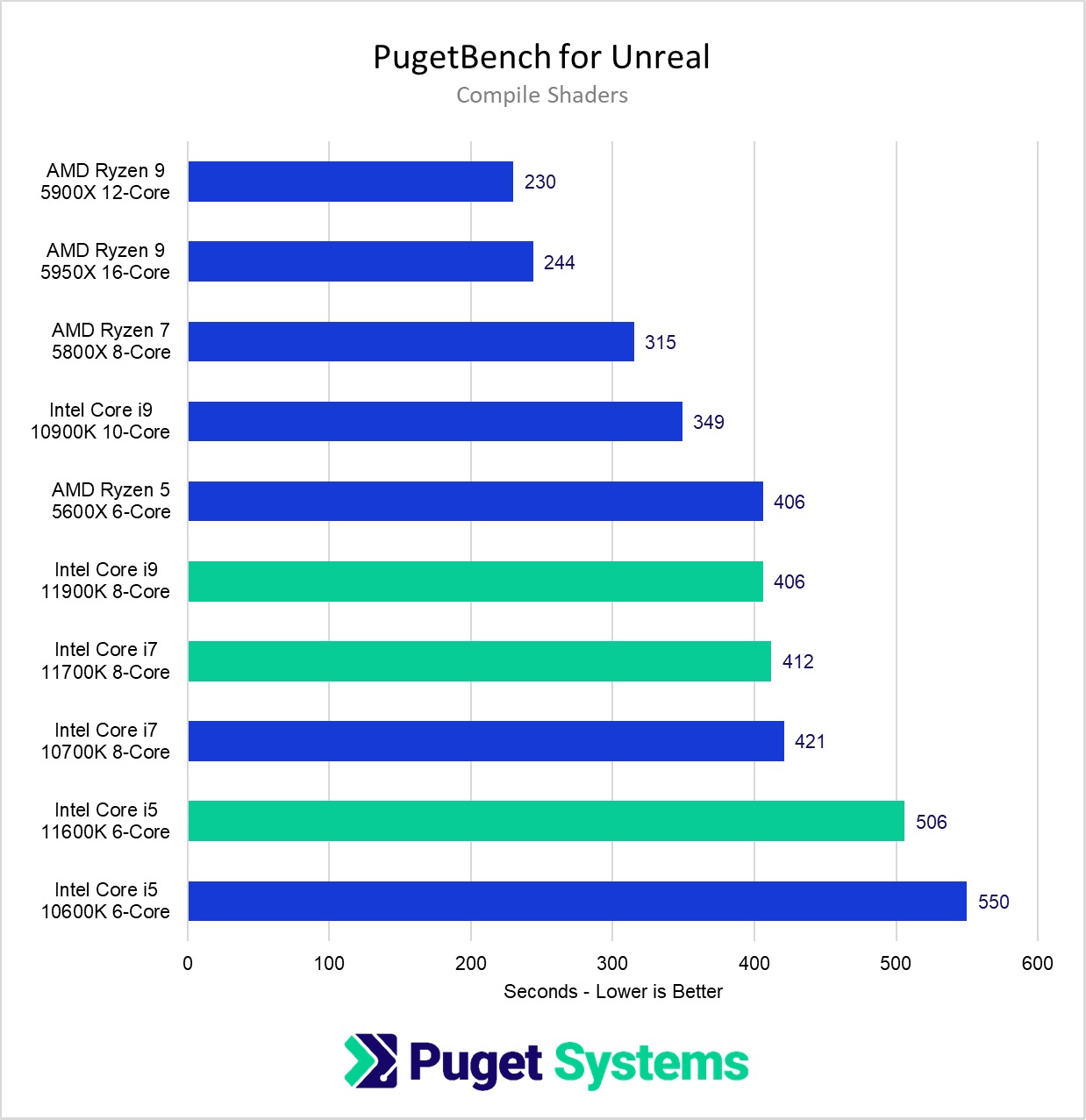 This is a pretty rough showing for Intel. Their new top-of-the-line CPU is 14% slower than the previous 10900k and only manages to tie the 6-core Ryzen 5600X. The 11700k is only 2% faster than the 10700k. The 11600k has a modest 8% improvement over the last generation. The fact that none of the 11th Gen Intel processors were able to outperform any of the AMD CPUs is pretty rough.

The relationship between CPUs and Frames Per Second is complicated. Exactly how much of an influence the CPU has on FPS depends on a lot of factors. For example, it is the CPU’s job to shuttle data from the hard drive to the video card, it's also controlling AI, calculating hit detection and projectiles, player input, etc. etc. For some use cases, such as Virtual Production or ArchViz, these really aren’t an issue. Also, as screens keep growing in pixel count, with 4k becoming more and more common, the burden of work keeps getting pushed more and more onto the GPU. 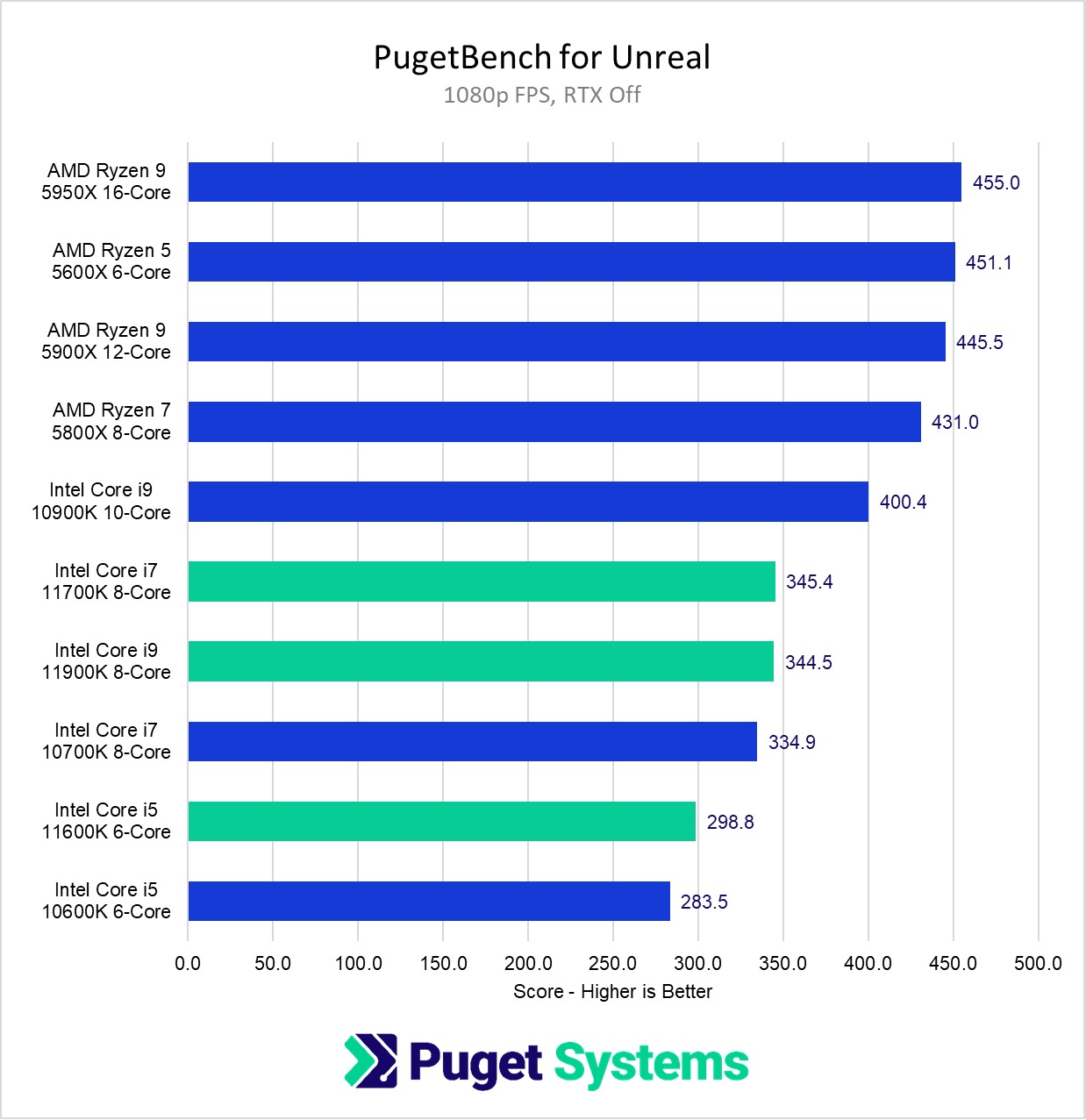 The Intel CPUs show no significant improvements over the previous generation, and all still fall behind AMD’s platform. The 11700k is about 20% behind the Ryzen 5800X with the same number of cores. There is potential for improvements from Intel, but at the time of review, they have a long way to go.

But that’s only part of the story. Looking at the rest of the chats, simply enabling ray tracing brings the results within 6% of each other. Now let's look at what happens when we up the resolution to 4k and enable ray-tracing effects. As you can see, the graph flattens out to less than a 4% difference from the lowest performer to the top. All the results are within a couple of frames, essentially within the margin of error of each other. Once you get a higher resolution, with more effects on the screen, the GPU takes on most of the workload and the CPU doesn’t have much influence. If you are powering a large LED volume for virtual production, you’ll be much more concerned about the GPU. 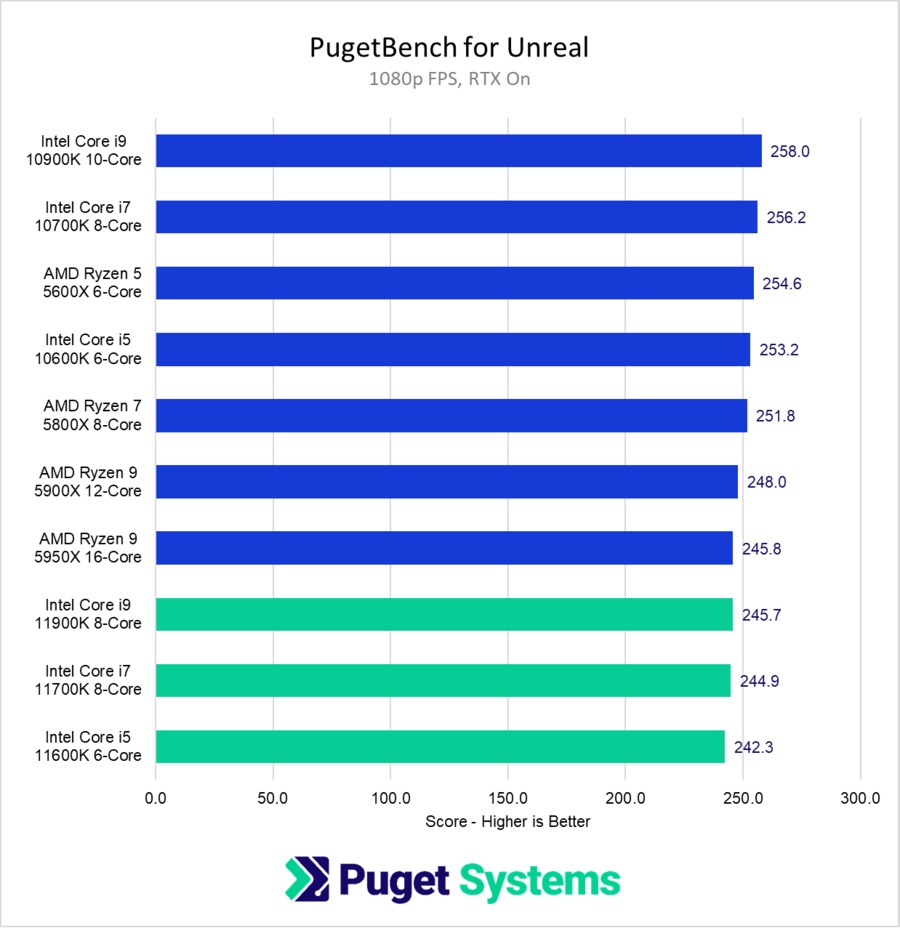 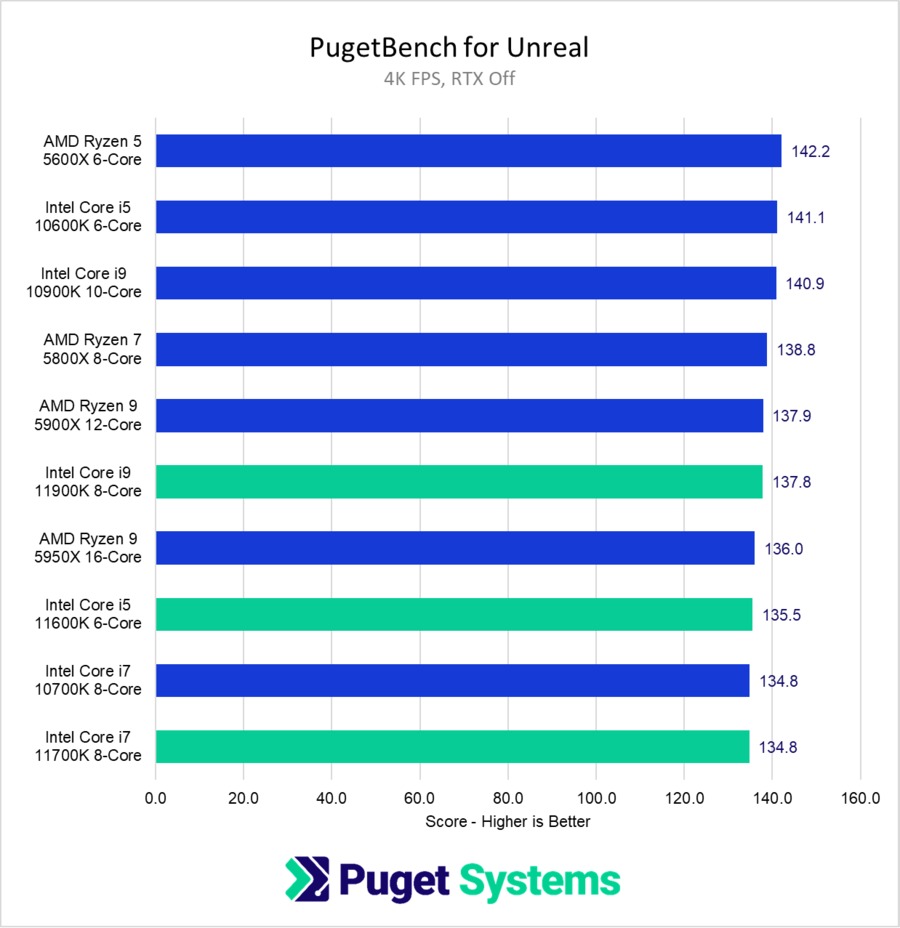 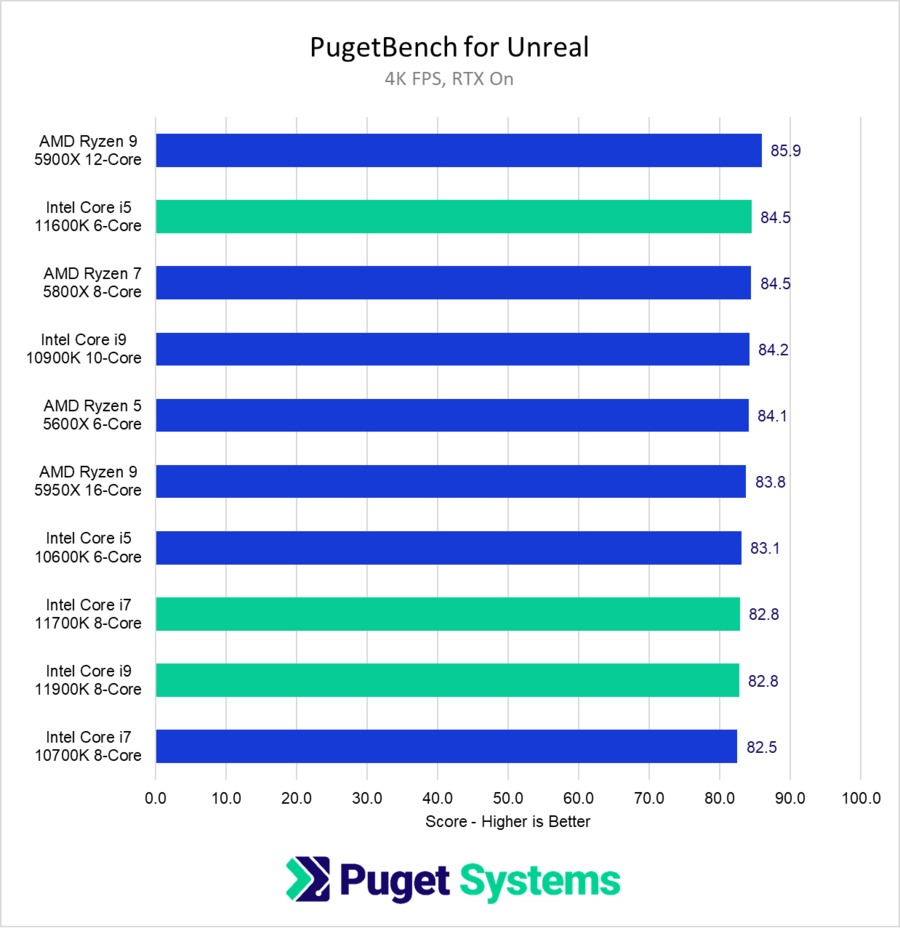 Given all this, I’ve not included FPS in the overall CPU score. I do not know of a use case, outside of competitive gaming, that would benefit from these kinds of frame rates at such a low resolution. If that is a metric you use professionally, please let me know and I’ll look into adding it in future versions. I did want to include this section to show that at higher resolutions, and with more complex visuals, the CPU makes little difference. If you are concerned about maintaining a target frame rate at a given resolution, the CPU won't be holding you back.

Development within Unreal Engine wants more cores above all else. The per-core performance increase has helped Intel’s new CPUs over the previous generation. Intel’s 11900k averaged only 5% slower than the 10900k, despite losing two cores. However, some tests were considerably slower, while others were faster, so you’re experience may differ. The 11700k averaged 13% faster than the 10700k and the 11600k came in 18% faster than the 10600k.

In general, this was a respectable generational improvement. However, on a core for core comparison, these new CPUs are still lagging behind AMD’s Ryzen CPUs. 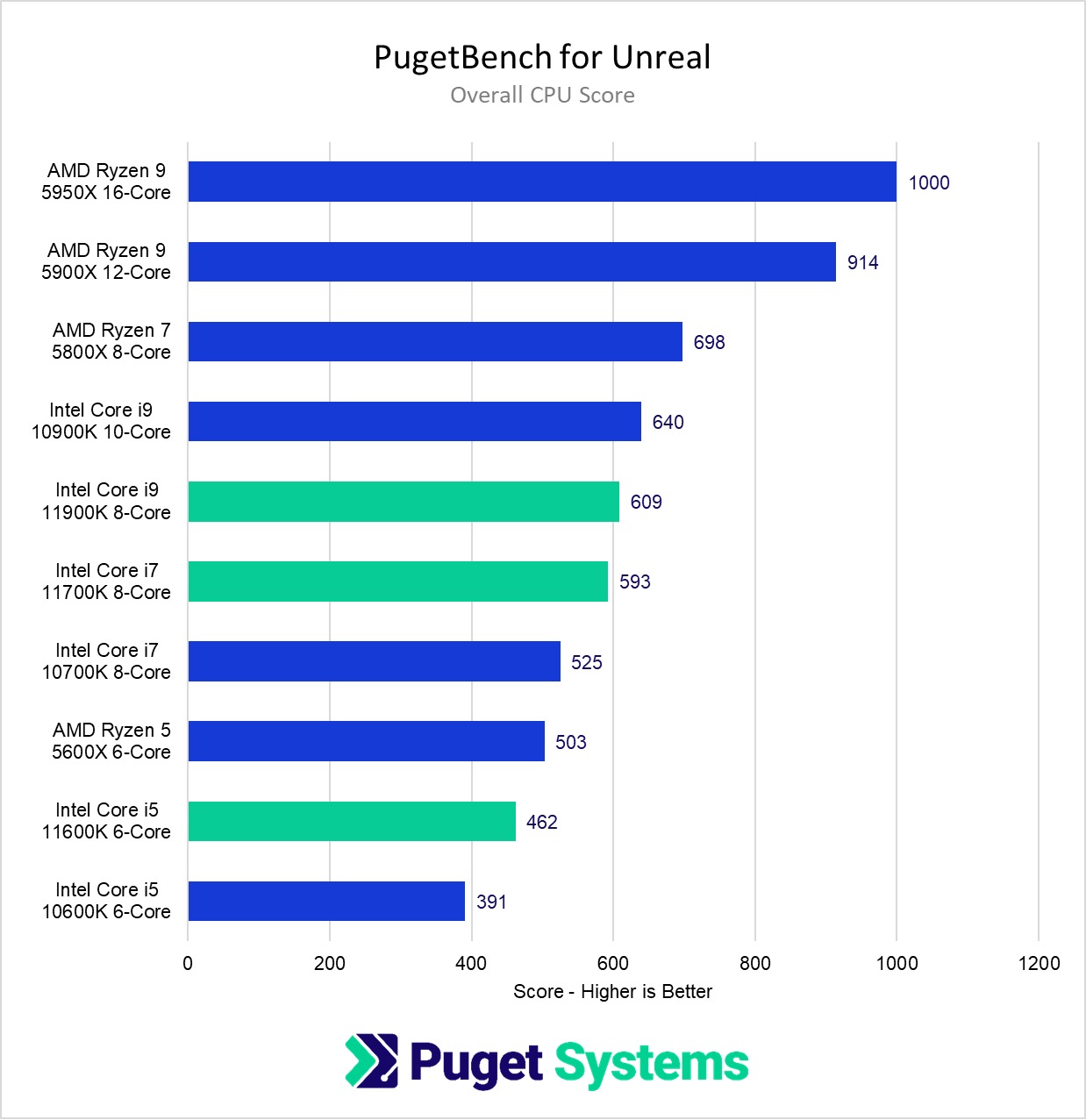 Intel’s per-core performance improvements do have noticeable impacts when compared to the 10th Gen, however, they still lag behind the Ryzen CPUs with the same core count or price. Only one Intel CPU managed to outperform an equal Ryzen CPU, but only in one specific test. Otherwise, AMD outperformed Intel across the board, often at a lower price point.

Unreal Engine is an application that will leverage as many CPU cores as you throw at it. As such, Intel only offers up to 8 cores, while Ryzen also has 12 and 16 core options that significantly outperform anything Intel has. The Z590 platform also has improvements over the Z490, such as PCIe Gen4, but again, those improvements are putting them on par with what AMD has been offering for a while.

Keep in mind that the benchmark results in this article are strictly for Unreal Engine and that performance will vary widely in different applications. If your workflow includes other software packages (we have similar articles for V-Ray, After Effects, DaVinci Resolve, and more), you need to consider how the system will perform in those applications as well. Be sure to check our list of Hardware Articles to keep up to date on how all of these software packages – and more – perform with the latest CPUs.