Over the last six months, there has been a blur of CPUs released from both Intel and AMD. Starting in March, we saw the launch of the 8 core Ryzens from AMD which was followed a few months later with the first batch of Intel's Skylake-X CPUs. After that, AMD launched Threadripper which was the first 12 and 16 core consumer CPU. More recently, Intel launched their Core i9 7920X 12 core in August and is finally completing their Skylake-X product line today with three more CPUs: the Core i9 7940X 14 core, the Core i9 7960X 16 core, and the Core i9 7980XE 18 core.

The trend we are seeing with all these CPUs is one thing: more cores! Unfortunately, more is not always better and that is doubly true for After Effects. Ever since After Effects CC 2015, high core count CPUs have not actually been a great choice for most users. They certainly are terrific if you utilize the "Cinema 4D" 3D Renderer (we have CineBench results for these CPUs available here if you are interested), but as Adobe has added more and more GPU acceleration, lower core CPUs with a high frequency actually out-perform higher core count CPUs by a significant margin. These lower core count CPUs are not always the best choice due to the fact that they often only support up to 64GB of RAM, but in terms of raw After Effects performance they are king.

Even though it is unlikely that the 14, 16, and 18 core CPUs from Intel will be particularly good for After Effects, we decided to put them through our testing anyway. There will be some users that are attracted to them for their high 3D rendering performance, so we thought it would be useful to see just how well they perform in more typical After Effects scenarios.

Our test platforms for the Skylake-X and Threadripper CPUs are listed below, but we did want to point out that the RAM configuration changed a little bit depending on the CPU. For the majority of the CPUs we used DDR4-2666 RAM but since the Core i7 7800X only natively supports DDR4-2400 we tested with that RAM instead.

As we noted in the last section, in most situation After Effects performs best with a lower core count, high frequency CPU so these new 14, 16, and 18 core CPUs (or any of the above CPUs for that matter) are unlikely to be the absolute best in terms of raw performance. The higher RAM capacity of these two platforms is a major consideration, but to see how they compare against what is currently the fastest CPU for After Effects we also decided to include the Intel Core i7 7700K in our testing.

Before getting into our testing, we also want to point out that while our test platforms are using a single hard drive, that is not actually what we would typically recommend to our customers. A two (or more) drive configuration – with the cache files on a secondary drive – can make a big impact when scrubbing through complex timelines. However, since we will not be testing anything that would benefit from multiple drives in this article, we opted to use a single drive to cut down on the number of variables. 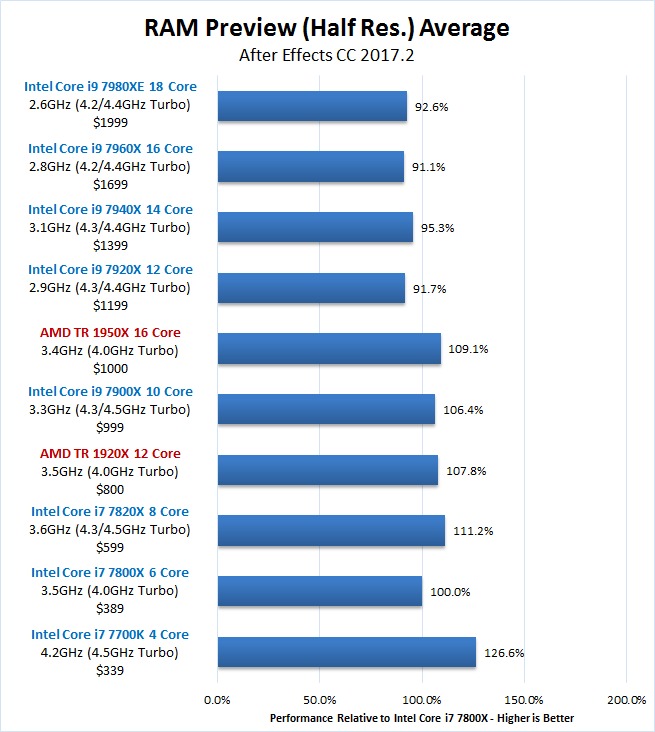 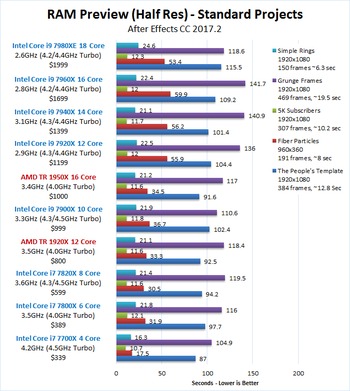 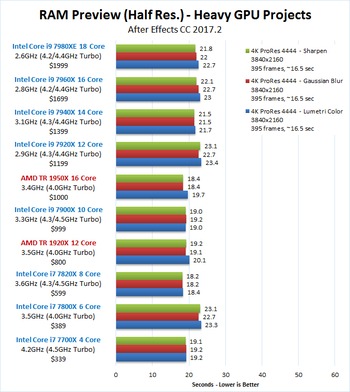 Since we are comparing 10 different CPUs across 8 different projects, it would take us a long time to go through the results one by one. Because of this, we decided to compile all the results into an overall average for each CPU compared to the Intel Core i7 7800X. As the lowest cost CPU in both the Skylake-X and Threadripper lines, it should make it a great point to compare the other CPUs against. If you wish to examine the raw results yourself, you can do so by clicking on the "Show Raw Results" link under the chart.

Unfortunately, the new 14, 16, and 18 core CPUs hit the exact performance bottlenecks we expected. Since After Effects cannot effectively utilize a high number of CPU cores, all three of the new CPUs performed poorly enough that even the lowly Core i7 7800X – which is up to 5x cheaper – was a decent amount faster. Especially compared to the Intel Core i7 7700K – which is currently the faster CPU for After Effects – these new CPUs are pretty lackluster and likely not a great choice from a performance perspective. 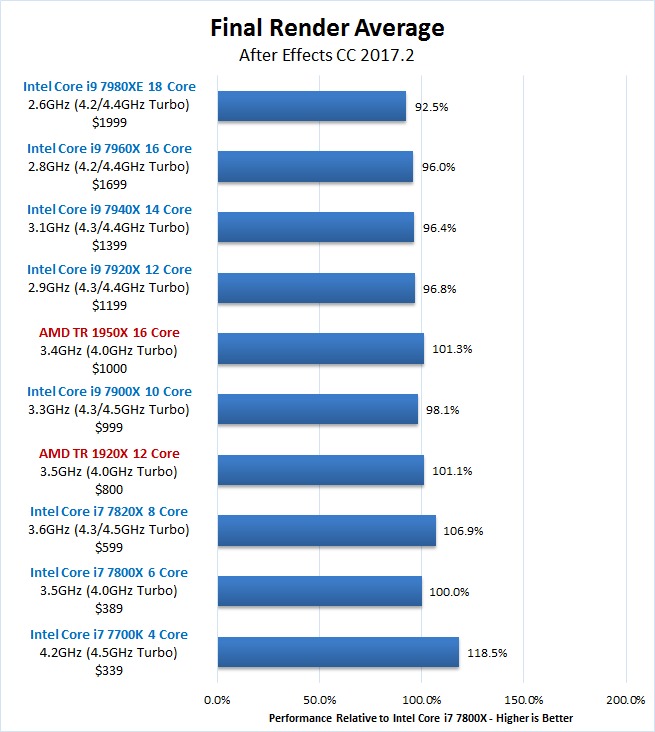 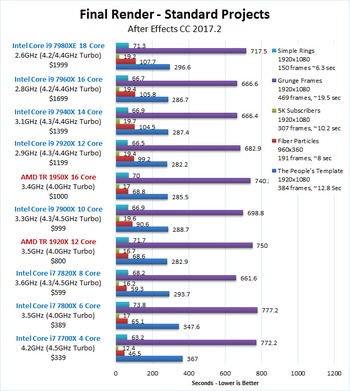 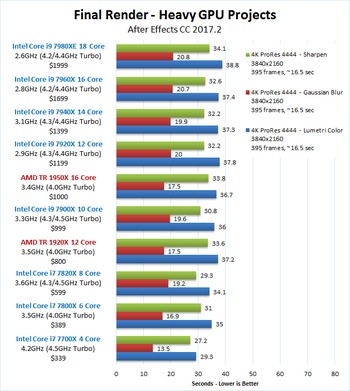 Just like in the previous section, since we are comparing 10 different CPUs across a range of projects, we decided to compile all the results into an overall average for each CPU compared to the Intel Core i7 7800X. If you have the time and will, feel free to examine the raw results yourself by clicking on the "Show Raw Results" link below the chart.

For this test, the new 14, 16, and 18 core CPUs still performed pretty poorly but they were not quite as far behind the Core i7 7700K or Core i7 7820X as they were in the previous section. One thing that is very interesting to see is the very clear drop in performance as you go up in core count on the Intel CPUs. From the Core i7 7820X 8 core on up, every time you add a pair of cores the performance drops by a measurable amount.

There is no reason to try to sugar coat things here, for normal After Effects projects these new CPUs from Intel are not very good. To be fair, After Effects is about the worst case scenario for these CPUs as the software is very poor at utilizing high core counts, but it is interesting to see just how much slower these expensive CPUs actually are: 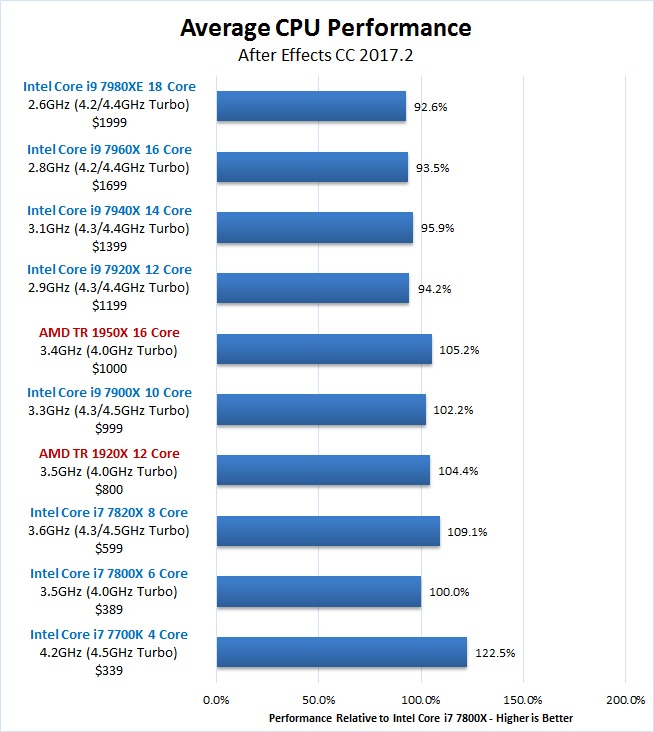 Can an argument be made for using any of these CPUs in After Effects? Really the only time it would make sense is if you use the integrated "Cinema 4D" 3D renderer or some other CPU-based rendering engine. However, if you only occasionally use it or are about a 50/50 split between needing 3D rendering performance and general AE performance, then the AMD Threadripper 1950X is probably actually a better choice since you don't have to give up as much general AE performance. But if 3D rendering is your primary bottleneck and you have a big enough budget, our testing in Cinebench has shown that the Core i9 7960X and Core i9 7980XE CPUs should be faster for 3D rendering than the AMD Threadripper CPUs.

For most After Effects users, however, these CPUs will be a poor choice. In very specific scenarios they might be good, but for 99% of AE users we would recommend sticking with either the Intel Core i7 7700K for those that need pure speed in AE or the Intel Core i7 7820X for users that need a high amount of system RAM.