Skip to content
Always look at the date when you read an article. Some of the content in this article is most likely out of date, as it was written on March 18, 2019. For newer information, see our more recent articles.

While the NVIDIA Quadro cards are often positioned as being the type of GPU you would want to use in a workstation, a significant number of video editors and colorists use either NVIDIA's GeForce or AMD's Radeon line of video cards since they give terrific performance for their price. Especially in the higher-end production fields, however, there is often a solid reason to use one of the NVIDIA Quadro GPUs instead. In most cases, there are typically three main reasons why you would want to use a Quadro card in an application like DaVinci Resolve:

One thing you will notice is that pure performance is not one of the reasons we listed. There are some applications where Quadro cards do give better performance than GeForce (primarily in the CAD/engineering software), but we are not aware of any video editing application where this is the case. If raw performance in Resolve is what you need, we recommend checking out one of our recent DaVinci Resolve GPU articles where we looked at the performance of the NVIDIA GeForce and AMD Radeon series cards. 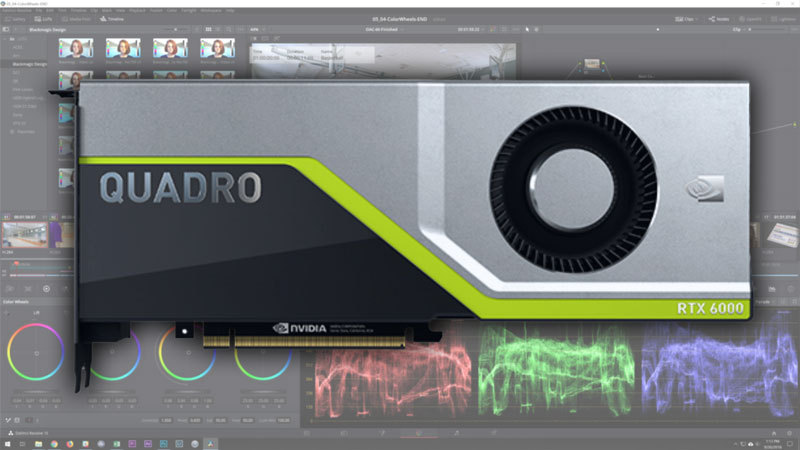 Before we get into our testing, we did want to look at the most relevant specifications for the Quadro cards we will be testing in this article. Normally we wouldn't do this since real-world performance is more important than specs, but we wanted to point out that the Quadro RTX 6000 and RTX 8000 have the same number of CUDA cores and the same theoretical FP32 (single precision) performance. This is because these two cards are actually identical except for the fact that the RTX 8000 has twice the VRAM. Because of this, we don't expect to see any higher raw performance with the RTX 8000 even though it is a more expensive card.

Like we mentioned, specs don't always reflect real-world performance so the only way to see exactly how these cards perform is to put them through our DaVinci Resolve benchmark process. If you would like to skip over our test setup and benchmark result sections, feel free to jump right to the Conclusion section.

We kept our project timelines at Ultra HD (3840×2160) across all the tests, but changed the playback framerate to match the FPS of the media. For all of the difficult RAW footage we tested (CinemaDNG & RED), we not only tested with the RAW decode quality set to "Full Res" but we also tested at "Half Res" ("Half Res Good" for the RED footage). Full resolution decoding should show the largest performance delta between the different cards, but we also want to see what kind of FPS increase you might see by running at a lower decode resolution. 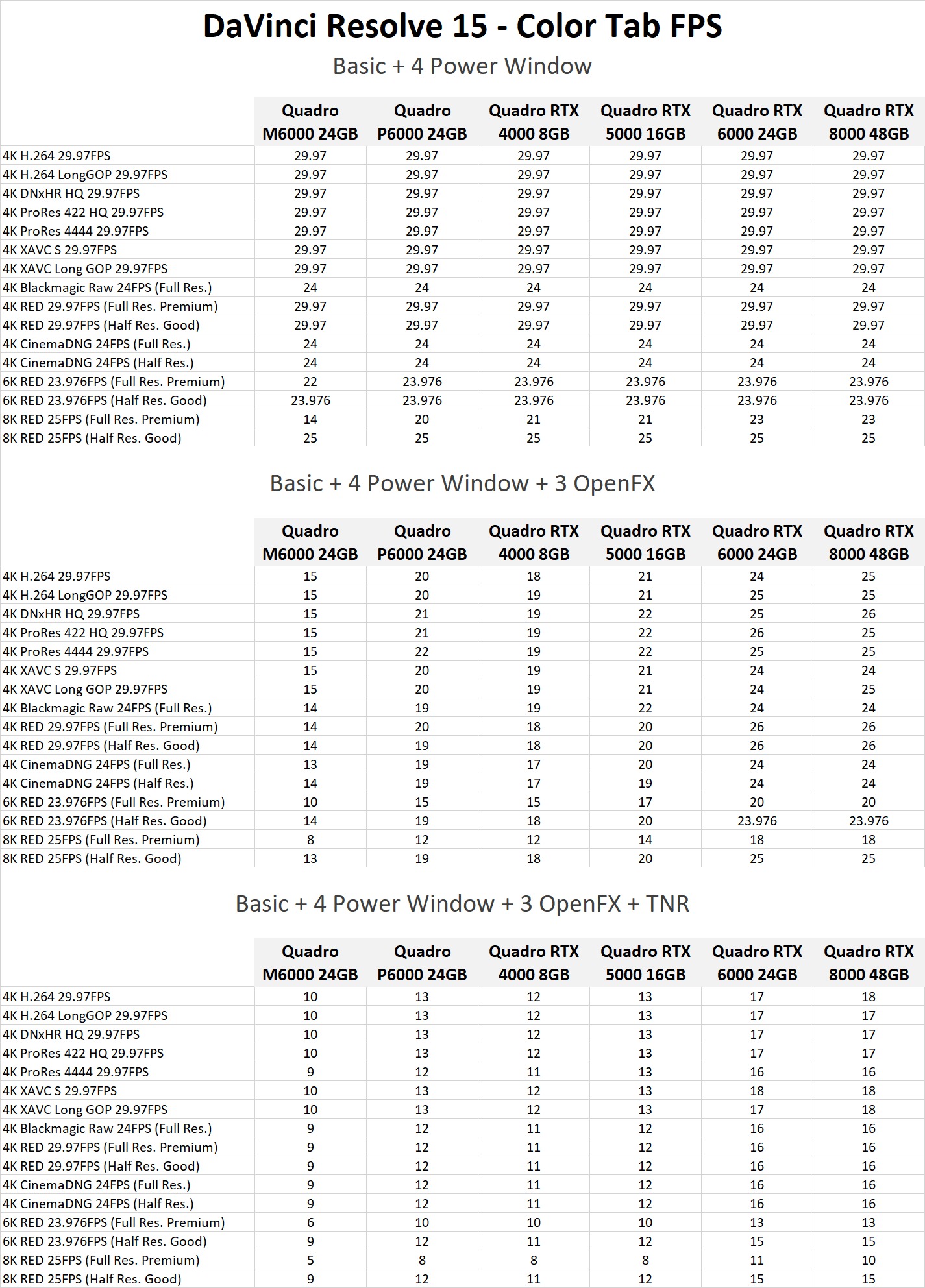 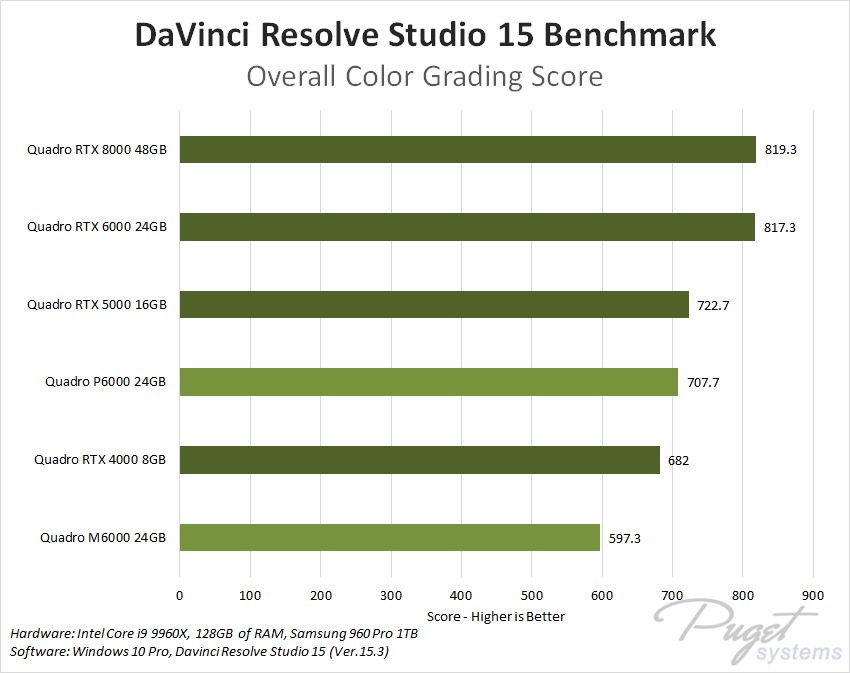 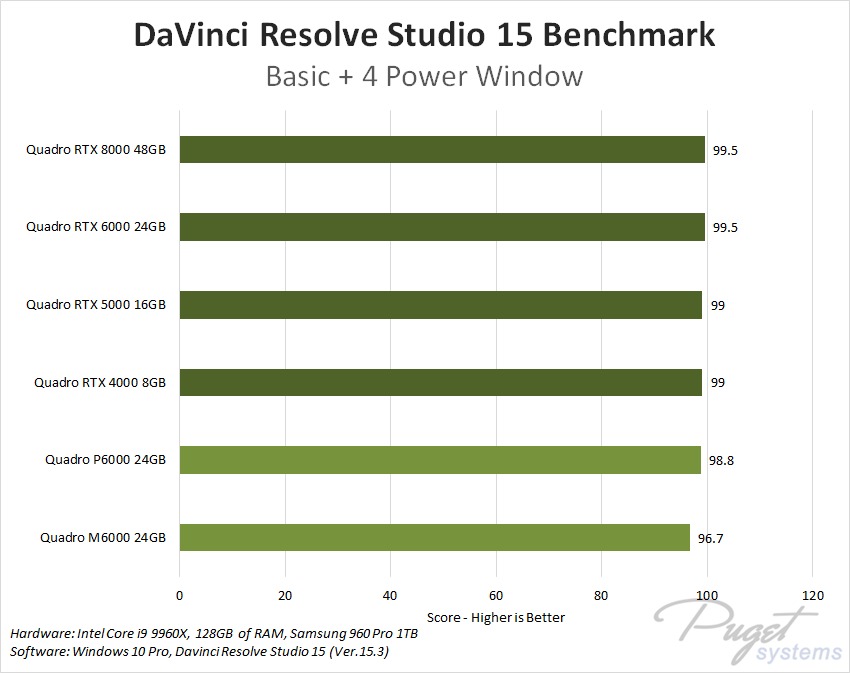 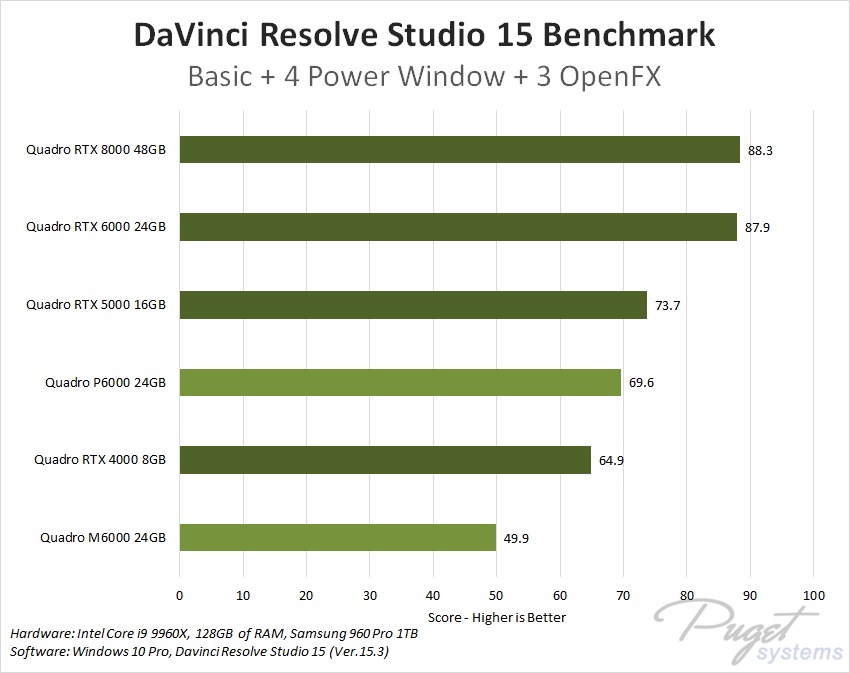 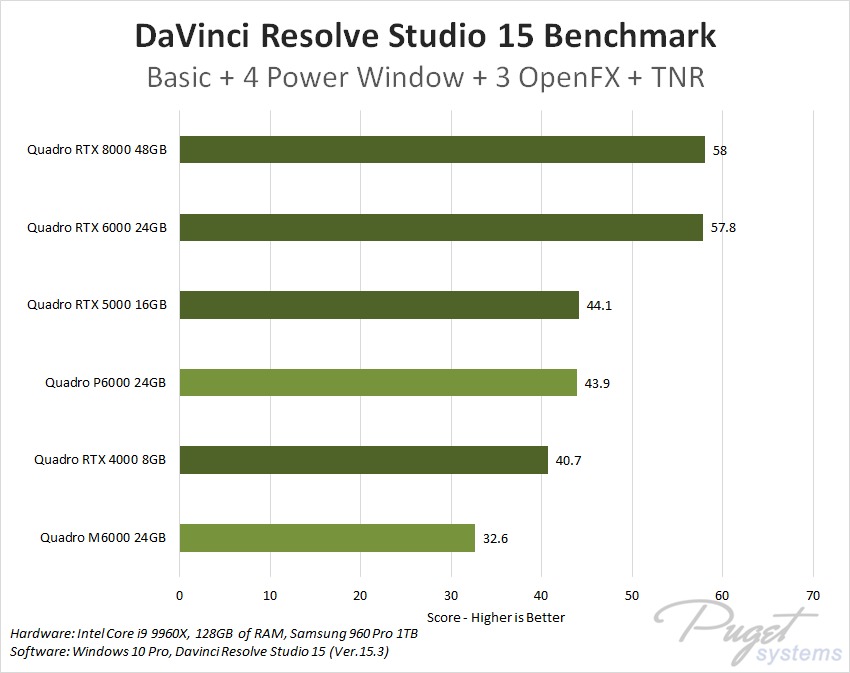 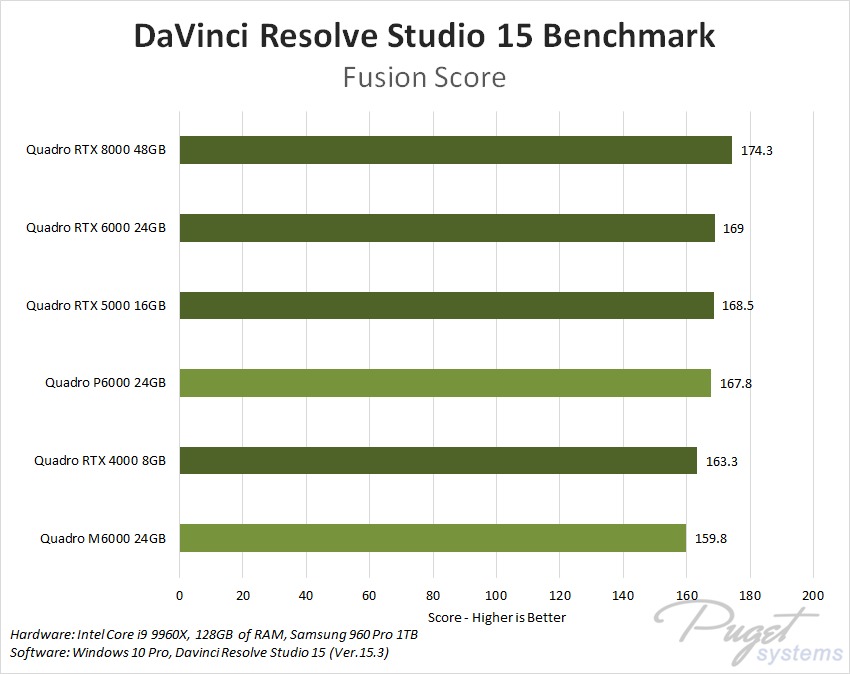 Our results are divided into several categories based on the level of grade as well as an "Overall Color Grading Score" that is a combination of each grading score and a dedicated result for Fusion (which we will ignore since it doesn't use the GPU much). For most users, the Overall Color Grading Score should be a pretty accurate breakdown of how you would expect each GPU to fare in DaVinci Resolve. However, if you tend to do very heavy grades with things like noise reduction, you may want to scroll to the fourth chart which has the results for a grade with a combination of Power Windows, OpenFX, and TNR.

Starting at the top, the Quadro RTX 6000 and RTX 8000 performed exactly the same which is to be expected since the only difference is the VRAM amount. Having enough VRAM is incredibly important, but just like normal system RAM, having an overabundance of it won't affect performance. Since our benchmark only needs about 6-8GB of VRAM, having a huge amount of video memory simply isn't a factor. Just for reference, the ~820 score the RTX 6000 and RTX 8000 achieved in our benchmark puts these cards right in-between a GeForce RTX 2080 and RTX 2080 Ti.

Moving down the chart, you may be surprised to see that the previous generation P6000 is a bit slower than the RTX 5000 even though the GPU specs say that the P6000 should be faster (12 TFLOPS vs 11.2 TFLOPS). This comes down to what we mentioned earlier about how part specifications is not a reliable way to measure real-world performance. Specs can be useful when comparing models within a single product line, but especially when comparing different generations of card, performance specs are almost meaningless.

This is further demonstrated by the Quadro M6000 results. It should only be slightly slower than the RTX 4000 in terms of raw TFLOPS, but in DaVinci Resolve it is actually about 12% slower. The higher VRAM may definitely be useful for many users, but you would have to find a M6000 for less than $900 (less than 1/5 the MSRP) in order for it to be a better buy than a Quadro RTX 4000 in terms of performance.

Which Quadro RTX GPU should you use for DaVinci Resolve?

Like any piece of hardware, what Quadro GPU you should use is going to depend on a number of factors including your budget, the amount of performance you need, and various other factors like how much VRAM your projects require. Because of this, we decided to go through each model individually and explain when and why you would want to use that specific card:

With a MSRP of $900, this is currently the lowest cost card in the Quadro RTX lineup. While the performance is not anything terribly exciting (it is only slightly faster than a GeForce RTX 2060), it has the robustness and reliability that you can expect from a Quadro series GPU. If you are doing basic grades and simply need a highly reliable GPU (or one that can output a 10-bit video signal), this is a great choice.

While roughly on par with the GeForce RTX 2070 8GB in terms of pure performance in Resolve, the Quadro RTX 5000 16GB has twice the VRAM, plus the higher reliability that comes with Quadro cards. The RTX 5000 is a solid choice if you are doing moderate grades or a decent amount of noise reduction while also needing the most reliable GPU possible.

For those that work with 8K media and do a lot of noise reduction, the Quadro RTX 6000 24GB is one of the few cards available with both the performance and VRAM capacity you likely require. The Titan RTX 24GB is a bit faster at a lower price point, but due to the design of the Titan RTX's cooler, you can only use one or maybe two of those cards in a system. With the Quadro RTX 6000, however, you can have up to four cards in a suitable workstation, or even up to 8 cards in an 8-GPU rackmount.

Very few DaVinci Resolve users are going to need the Quadro RTX 8000 48GB since the only benefit of this card over the RTX 6000 24GB is the larger VRAM capacity. In most cases, if you are a user that will benefit from the 48GB of VRAM, you likely already know that you need it. If you aren't sure if you need 48GB of VRAM or not, you likely don't.

To be completely transparent, most of the workstations we sell for DaVinci Resolve use the NVIDIA GeForce line of GPUs. A large part of this is due to the fact that Resolve is becoming much more accessible to the masses, which is where pure price-to-performance is typically a primary concern. If you want to simply get the best performance for your money, a GeForce (or AMD Radeon) GPU is simply going to be the best option. If you are in production environment where maximum reliability is key or where you need a lot of VRAM for 8K or heavy noise reduction, however, there is no replacement for workstation-class cards like those in the NVIDIA Quadro line.

It is also worth pointing out that while Quadro cards do not prioritize raw performance as heavily as GeForce does, the new Quadro RTX cards are significantly faster than previous generations. Compared to the Quadro P6000, the new RTX 6000 is about 15% faster while having a MSRP that is $1,000 cheaper. Or, if you go back another generation to the Quadro M6000, even the $900 Quadro RTX 4000 is able to beat it in terms of pure performance.

Overall, these cards are not going to be the right choice for all DaVinci Resolve users simply due to their cost. But if the higher reliability or VRAM capacity is something you need, these new Quadro RTX cards are excellent.