Written on March 12, 2019 by Matt Bach
Share:
Always look at the date when you read a hardware article. Some of the content in this article is most likely out of date, as it was written on March 12, 2019. For newer information, see DaVinci Resolve GPU Roundup: NVIDIA SUPER vs AMD RX 5700 XT
Table of Contents

DaVinci Resolve is one of the few applications in the video editing world that really pushes the envelope in terms of GPU acceleration. Not only will a higher-end GPU almost always give you better performance, but Resolve can take advantage of multiple GPUs at the same time. In fact, many professional Resolve workstations will have three, four, or even more GPUs all working together to provide the user with the smoothest color grading workflow possible.

For quite a while now, NVIDIA GPUs have been our go-to recommendation for DaVinci Resolve. AMD's Radeon video cards were fine for their price, but for the level of performance most of our customers desired, AMD simply couldn't keep up. However, AMD's new Radeon VII 16GB has a number of features that could shake things up.

Right away, we knew that this was a card that was going to be very interesting for DaVinci Resolve due to its 16GB of VRAM. Many of our customers and readers are starting to work with 8K media or are using Resolve for heavy noise reduction where having a high amount of VRAM is incredibly important. 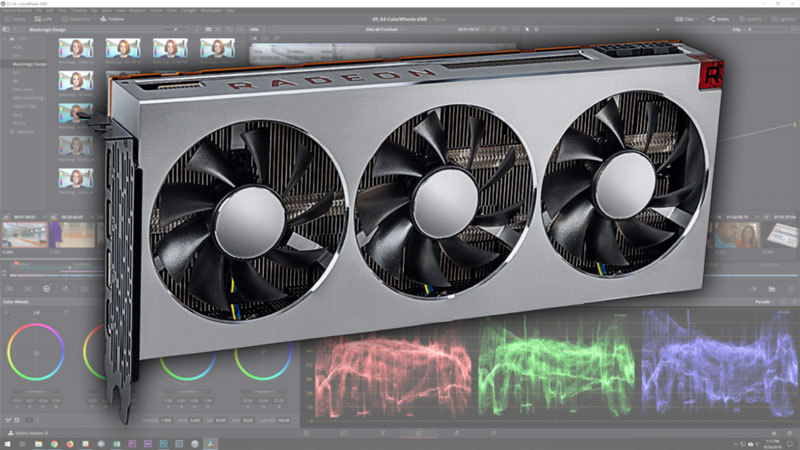 While the 16GB of VRAM alone makes this an interesting option for DaVinci Resolve, raw performance is a major concern as well. To see how the Radeon VII fares, we are going to take a look at how it stacks up against the AMD RX Vega 64 as well as the entire NVIDIA GeForce RTX lineup - plus the Titan RTX - in DaVinci Resolve Studio 15.3. We also have (or will soon have) a number of articles available looking at the performance of the Radeon VII in a range of other applications that you can view by filtering our recent articles to just those about Video Cards.

We kept our project timelines at Ultra HD (3840x2160) across all the tests, but changed the playback framerate to match the FPS of the media. For all of the difficult RAW footage we tested (CinemaDNG & RED), we not only tested with the RAW decode quality set to "Full Res" but we also tested at "Half Res" ("Half Res Good" for the RED footage). Full resolution decoding should show the largest performance delta between the different cards, but we also want to see what kind of FPS increase you might see by running at a lower decode resolution.

One thing we want to note is that we had quite a bit of GPU driver issues during our benchmarking process. First, we discovered that the NVIDIA GeForce 418.x and 419.x are currently giving about 10-20% lower performance in Resolve. We have a full write up on this issue in our Support Guide: DaVinci Resolve 15 - Performance loss with NVIDIA 418 & 419 driver. Due to this, we used the NVIDIA driver version 417.71 for our testing.

AMD also had some driver issues that caused image corruption of Blackmagic RAW footage. Even after trying every GPU driver AMD has available for the Radeon VII (ranging from 19.2.1 to 19.3.1) and going back to Resolve 15.0, we were unable to resolve the issue. The benchmark results are in line with what we would expect, however, so to keep this from holding up this article we decided to go ahead with the latest AMD driver. Just be aware that the results with BRAW may not be 100% accurate. 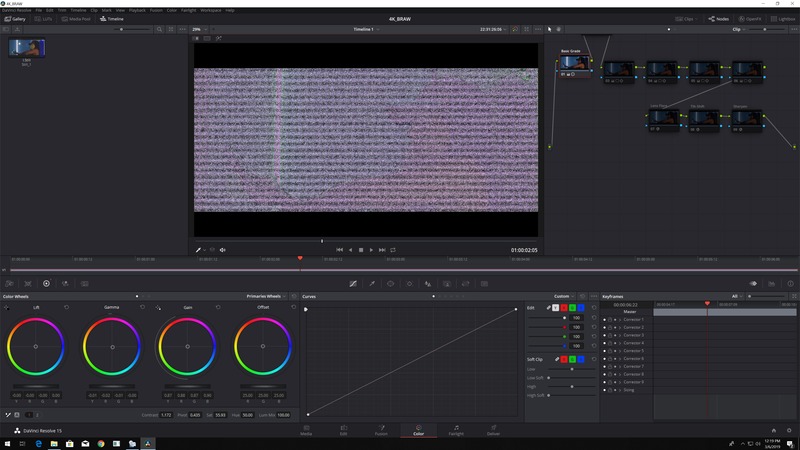 The issue with BRAW footage has been fixed in newer AMD GPU drivers. If you are encountering the issue, make sure you are using the latest drivers available from AMD. 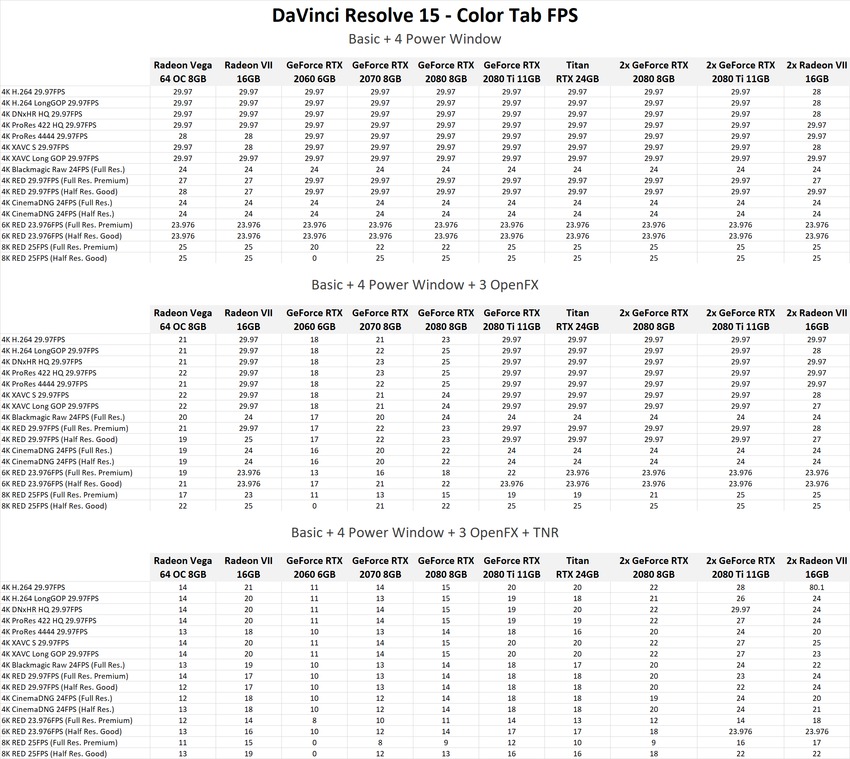 Our results are divided into several categories based on the level of grade, an "Overall Color Grading Score" that is a combination of each grading score, and a dedicated result for Fusion. For most users, the Overall Color Grading Score should be a pretty accurate breakdown of how you would expect each GPU to fare in DaVinci Resolve. However, if you tend to do very heavy grades with things like noise reduction, you may want to scroll to the fourth chart which has the results for a grade with a combination of Power Windows, OpenFX, and TNR.

While the Radeon VII isn't ideally suited for multi-GPU configurations due to its cooler design (we've talked about this before in regards to the similarly designed RTX card), with proper chassis airflow you should be able to use two of these cards in a full-sized chassis. What is interesting is that in a dual GPU setup, the Radeon VII doesn't scale quite as nicely as the RTX cards. Two Radeon VII are definitely much faster than one, but where the NVIDIA cards saw about a 35-40% performance bump on our hardest grading tests with TNR, the Radeon VII only saw about a 22% improvement.

Don't get us wrong, the Radeon VII 16GB is still very good in a dual GPU configuration since it is a hair faster (and has twice the VRAM) than a pair of slightly more expensive RTX 2080 8GB cards. But even if you were somehow able to get three or four Radeon VII cards in a system without them overheating, our guess is that NVIDIA would end up taking over in terms of raw price-to-performance once you got up to a triple GPU setup.

Is the AMD Radeon VII 16GB good for DaVinci Resolve?

However, nothing is perfect and there are two issues with the Radeon VII that you may want to consider: 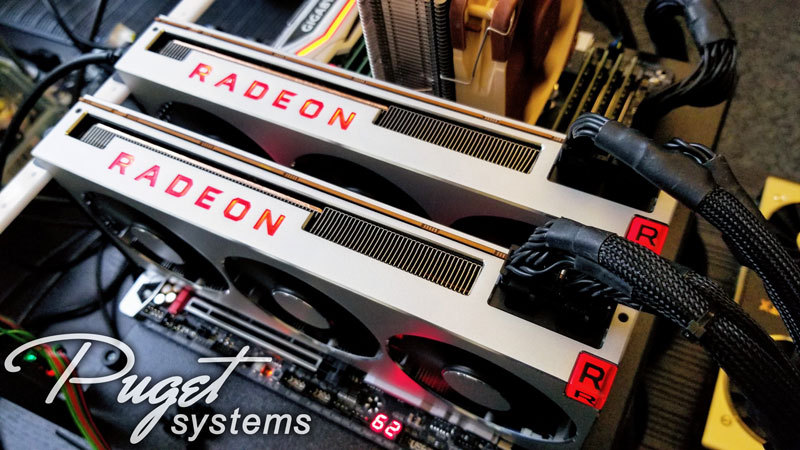 While the Radeon VII is great for Resolve, we do want to point out that if you have a very healthy budget, you can still get better performance from NVIDIA. Two (or three, or four) RTX 2080 Ti will give you more performance in Resolve than a pair of Radeon VII, and if you really need the VRAM you can go up to the Titan RTX or the Quadro RTX 6000/8000. That will dramatically increase the cost of your system, but if you absolutely need the best performance possible, NVIDIA is still king.

Of course, very few workflows involve just one piece of software. Because of this, we highly recommend checking out our recent Video Card articles where we look at - or will be looking at - the performance of the Radeon VII in Premiere Pro, Photoshop, DaVinci Resolve, as well as a number of other applications.