Skip to content
Always look at the date when you read an article. Some of the content in this article is most likely out of date, as it was written on July 7, 2019. For newer information, see our more recent articles.

We are beginning to publish more in-depth articles looking at the performance of the new AMD Ryzen CPUs in a number of applications. We will update this page as the posts go live, or you can subscribe to our newsfeed to keep up to date with our latest articles.

For quite a while, AMD has had a tough time competing with Intel in video editing applications like Premiere Pro and After Effects. Their first generation Threadripper CPUs allowed them to beat Intel in highly-parallel applications where high core counts mattered, but they have always struggled with per-core performance. Unfortunately, most editing applications are not terribly effective at using more than a handful of cores, which has put Intel solidly in the lead for those looking for a mid/high-end workstation.

While this has been bad for AMD in the past, this is actually what makes AMD's new 3rd generation Ryzen processors very exciting – not necessarily the increase in core count (although getting 16 cores is going to be very interesting), but rather the increase in performance for each individual core. It is so exciting, in fact, that even though we only have testing done for the low-end Ryzen 5 3600, we wanted to go ahead and publish these initial results to get an idea of how the new Ryzen CPUs might stack up against the previous generation Ryzen CPUs as well as Intel's 9th gen CPUs. 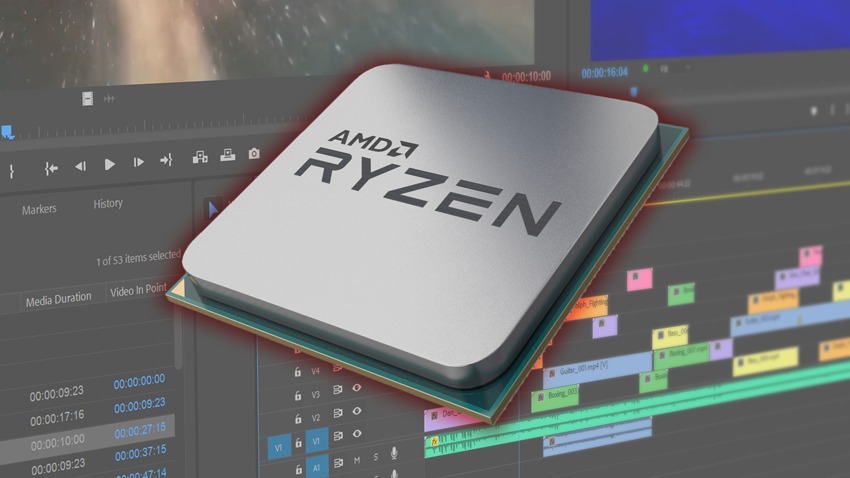 Keep in mind that we have a whole range of testing planned for the new Ryzen CPUs including more details on how they perform in Premiere Pro, After Effects, Photoshop, DaVinci Resolve, and many other applications. We are also planning on doing a dedicated set of testing to examine how RAM speed affects performance.

Until we have the higher-end Ryzen CPUs tested, however, we have to make due with a little bit of a teaser. If you would like to skip over our test setup and benchmark sections, feel free to jump right to the Conclusion. 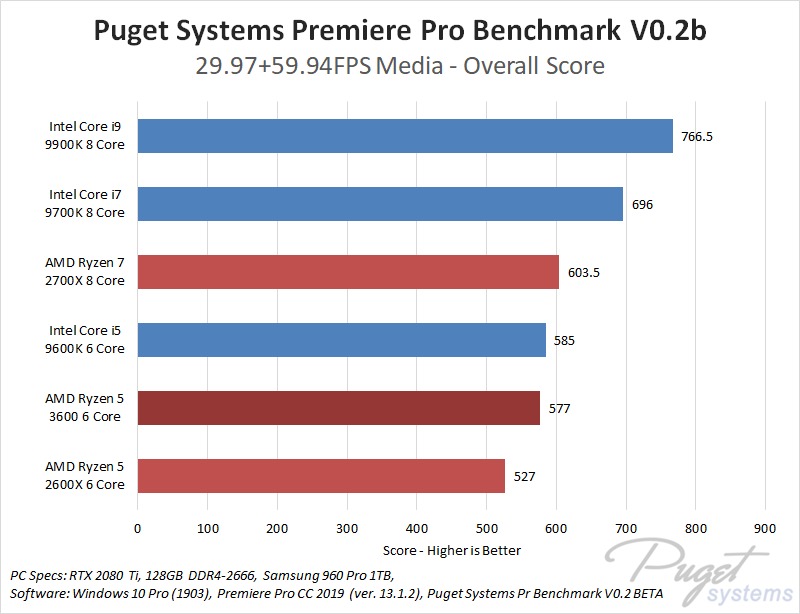 Compared to Intel, it performed roughly on par with the Core i5 9600K while costing about $60 less. There has been rumors of Intel dropping prices to make sure they favorably compete with AMD, but currently the AMD Ryzen 5 3600 has a MSRP of about $200 while the Intel Core i5 9600K has a MSRP of just over $260. 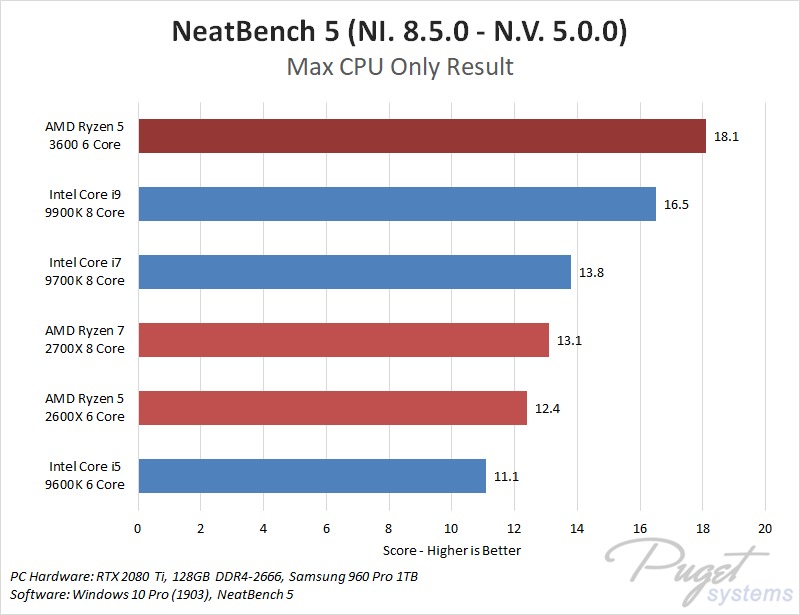 Neat Video is a noise reduction plugin that is currently one of the more popular options available. Plug-ins in general are something we plan on taking a look at more in the future, and Neat Video is a great place to start since they have an excellent stand-alone benchmark called NeatBench. Neat Video can use either the CPU, the GPU, or combine both together, but since using the GPU often overshadows the CPU, we decided to just look at the "Max CPU Only" result.

If there is any test to get you excited about the new Ryzen CPUs, this is it. Not only does the low-end Ryzen 5 3600 handily beat all of the previous generation Ryzen CPUs, it even beat the Intel Core i9 9900K (which is more than twice the price!) by a solid 10%. Frankly, this performance is so good that we are a bit worried there is something wrong with the benchmark itself. We are planning on digging in to this more when we have the full line of Ryzen CPUs available to test, but initial impressions are that the new Ryzen series is excellent for anyone using Neat Video. 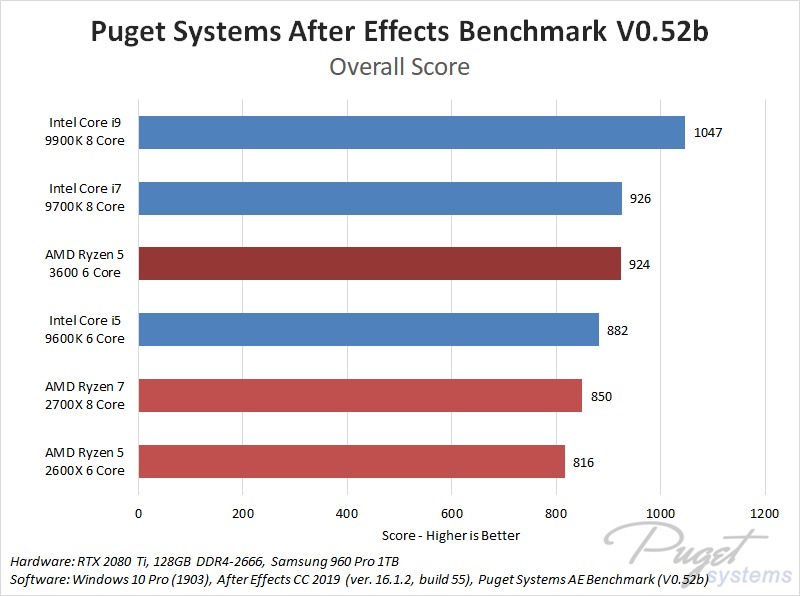 Unlike Premiere Pro and Neat Video, After Effects is not terribly great at using even moderate numbers of CPU cores in most instances. This actually is a good thing for the new AMD Ryzen CPUs since one of the supposed improvements was vastly improved performance in lightly threaded workloads.

Compared to Intel, the Ryzen 5 3600 performed about on par with the roughly twice as expensive Intel Core i7 9700K. Sure, it can't keep up with the Intel Core i9 9900K, but that is what the higher-end models should (hopefully) be able to tackle. 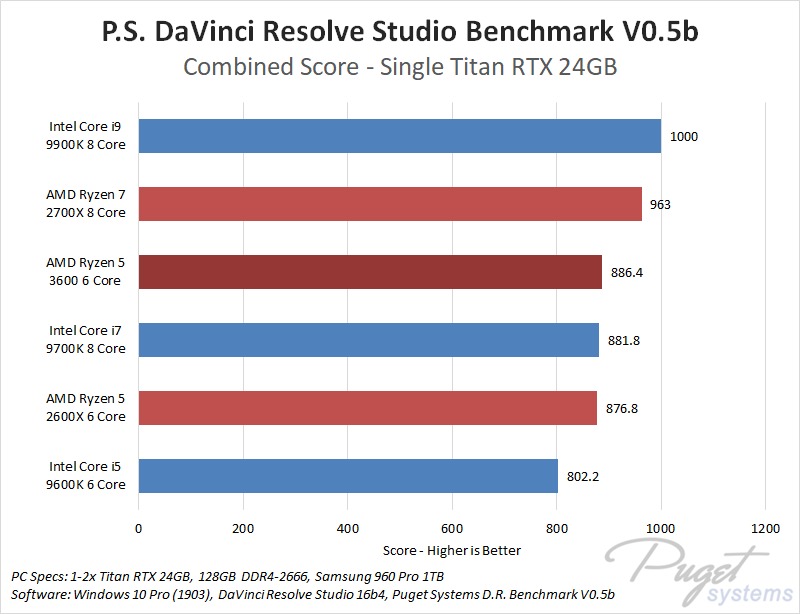 DaVinci Resolve is a very GPU-focused application, but there is still plenty of need for a powerful CPU.

Here, we saw only a marginal gain with the Ryzen 5 3600 over the previous generation Ryzen 5 2600X, but that is still not too bad considering the relative pricing of those two models. It also fares very well compared to the Intel CPUs, coming in at very slightly faster than the Intel Core i7 9700K. 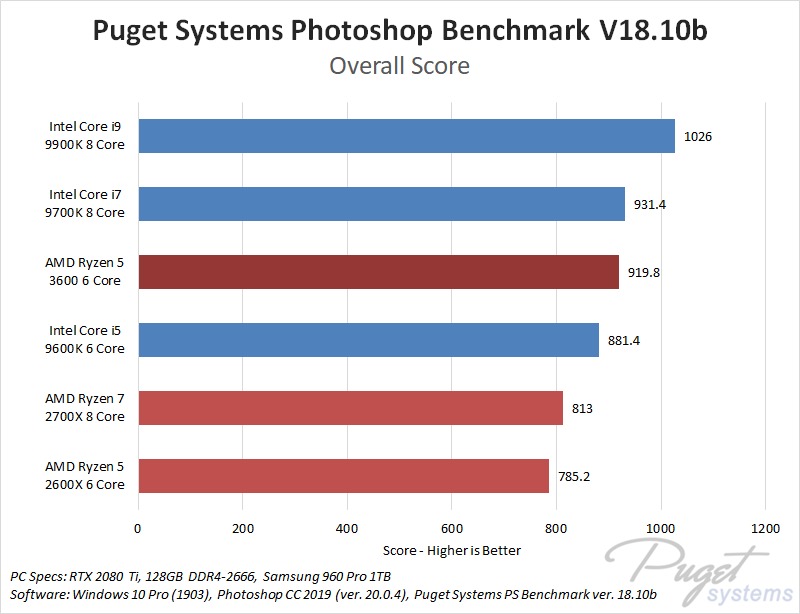 Photoshop may not be a true video editing application (unless you are one of those people that uses it's rarely used video timeline features), but it is very commonly used alongside Premiere Pro, After Effects, and similar apps so we decided to throw it into the mix.

How well does the Ryzen 5 3600 handle video editing?

Overall, the new Ryzen 5 3600 does a terrific job in all the video editing applications we tested. It may not be able to keep up with the higher-end Intel 9th gen CPUs like the i9 9900K, but it is solidly better than the Core i5 9600K, and in many cases trades blows with the more expensive Core i7 9700K. Considering the fact that a $200 AMD CPU is actively competing with a $400 Intel CPU, that is extremely impressive!

Keep in mind that this is a just a first look with the lowest-end SKU from the new AMD Ryzen series of CPUs. We still have the higher-end models to test, as well as an analysis on exactly how much RAM speed affects performance. This testing was all done with DDR4-2666 which is currently our go-to choice since it has a great balance between performance and reliability, but AMD CPUs do typically benefit from faster memory more than Intel CPUs.

Be sure to keep an eye out for upcoming articles looking at the higher-end Ryzen 3rd generation CPUs. If you haven't already done so, we highly recommend subscribing to our news feed or following @PugetSystems on Twitter.