Skip to content
Always look at the date when you read an article. Some of the content in this article is most likely out of date, as it was written on February 8, 2019. For newer information, see our more recent articles. 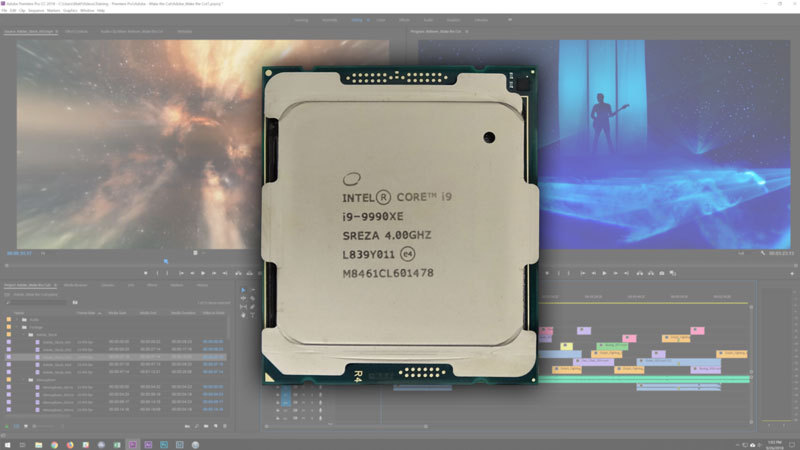 While specs alone are not a perfect representation of performance (especially across different product families), there are a few interesting things to point out about this CPU before getting into our Premiere Pro testing. First, it has a max Turbo Boost frequency of 5.1 GHz which means that it should perform much better than any other Intel X-series CPU in lightly threaded applications. At the same time, even if you are using all the cores, the Turbo Boost frequency only drops to 5.0 GHz which theoretically puts it at about the same performance as the Intel Core i9 9980XE in highly parallel applications.

On paper, this makes the i9 9990XE a bit of a golden CPU that should match or beat any other Intel consumer or enthusiast processor regardless of the application. In order to achieve this level of performance, however, this CPU draws about 50% more power than any other X-series CPU. While this obviously means that you need a beefy CPU cooling setup, you also need to have a motherboard and power supply that can provide said power.

In this article, we are going to take a look at how the Intel Core i9 9990XE performs in Premiere Pro compared to the other Intel X-series CPUs as well as the Intel Core i9 9900K which is currently the king of single-threaded performance. We also have a number of other articles available looking at the performance of the i9 9990XE in a range of other applications that you can view by filtering our recent articles to just show the ones about Processors.

Listed below are the systems we will be using in our Premiere Pro CC 2019 testing: 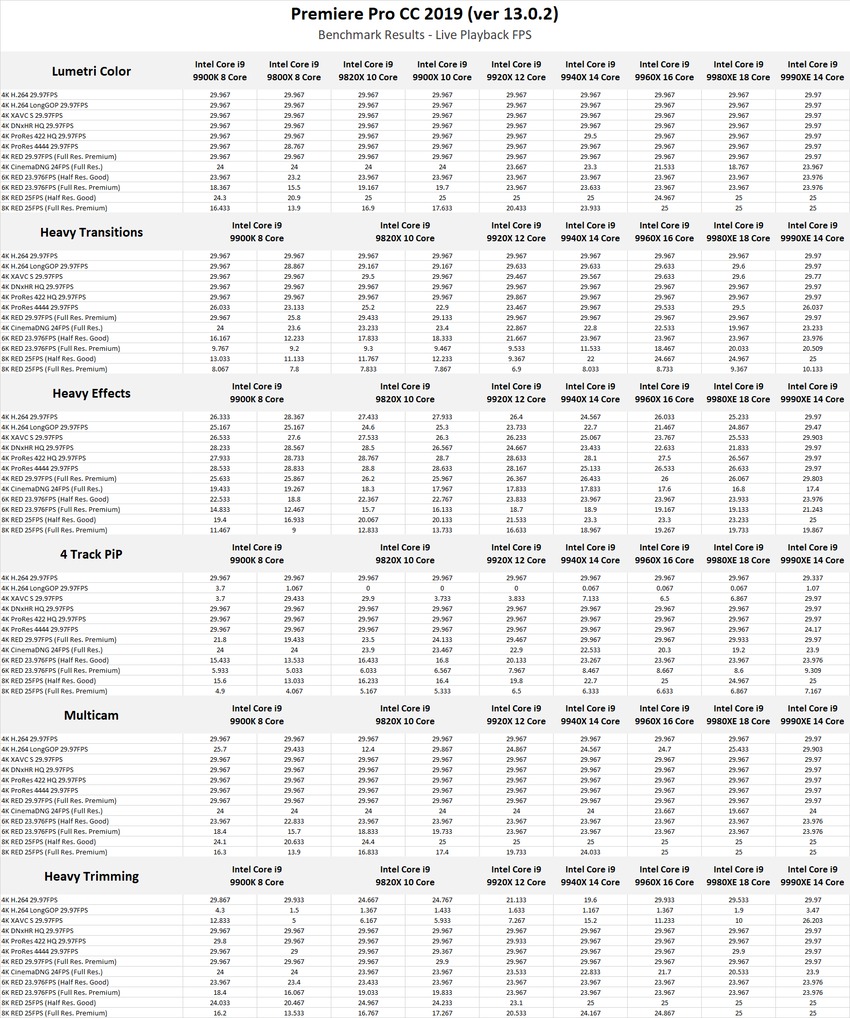 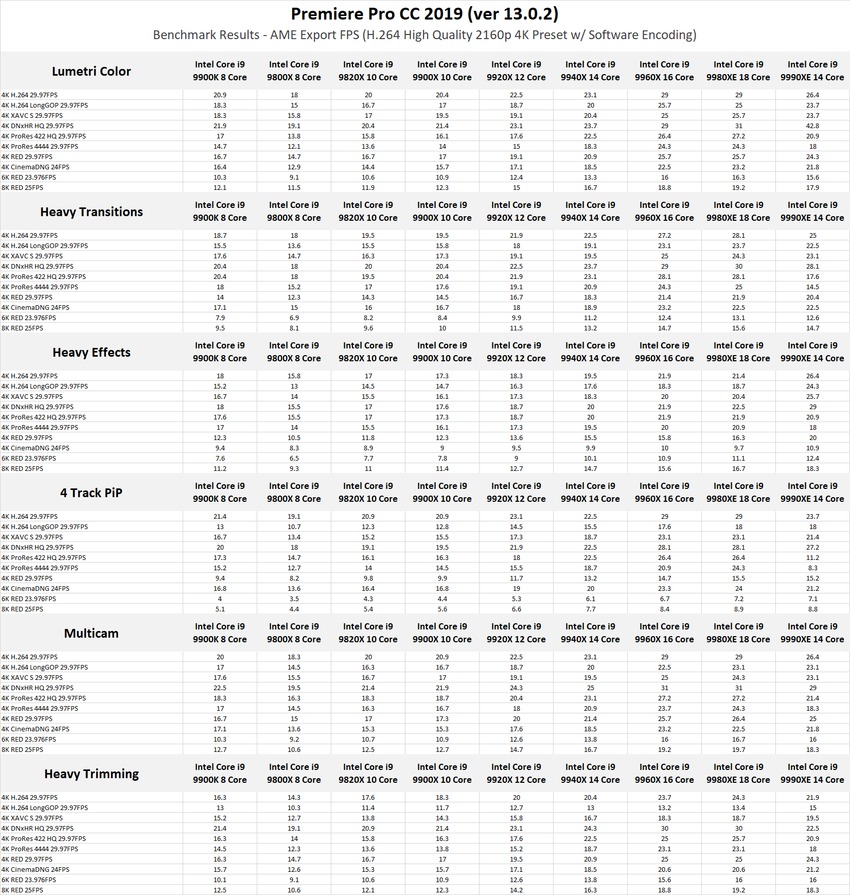 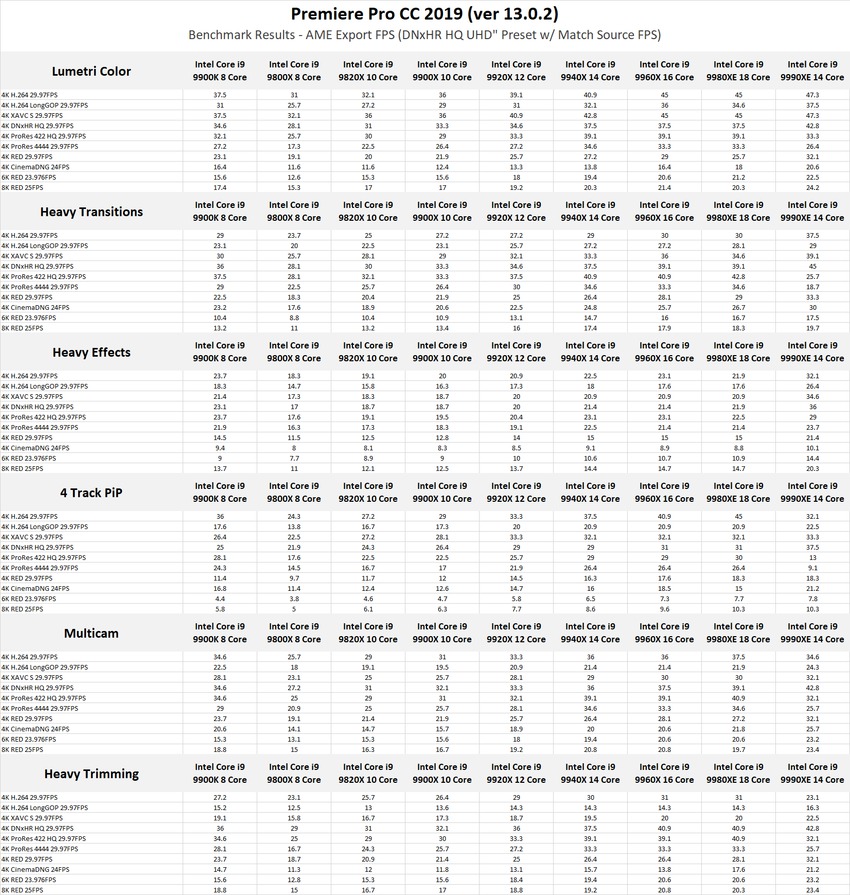 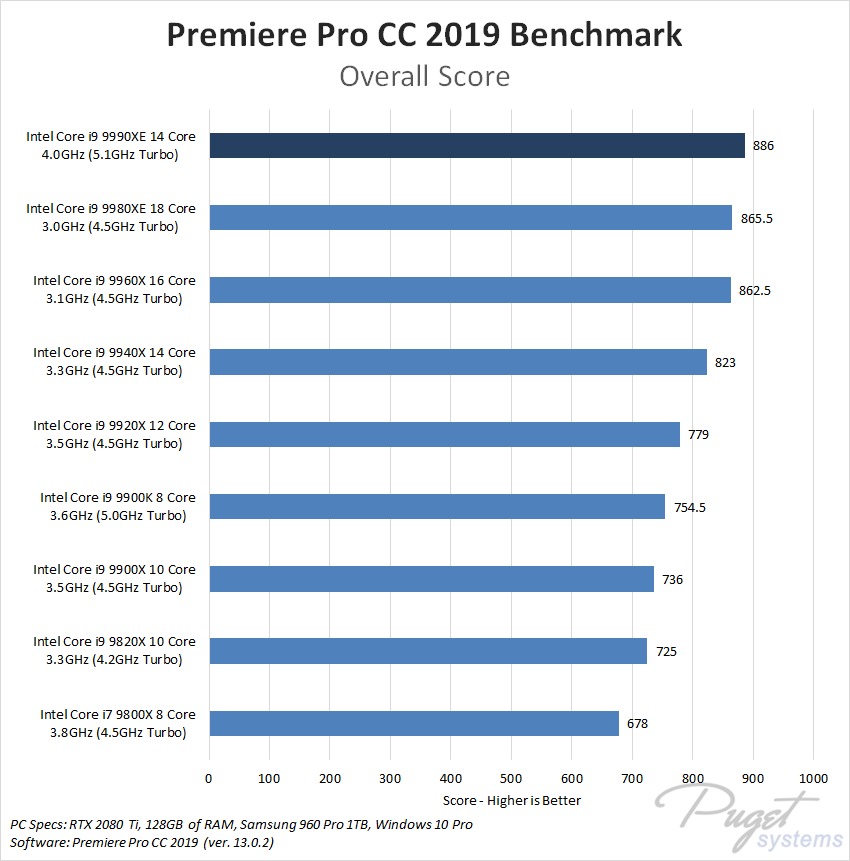 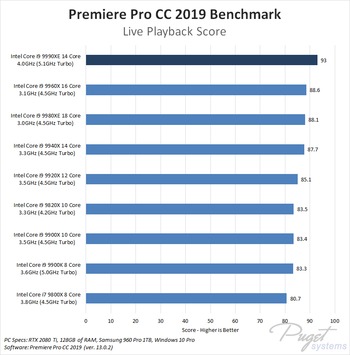 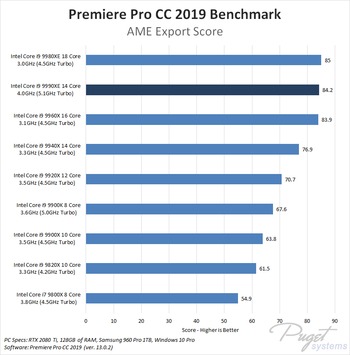 Our Premiere Pro benchmark looks at performance for both live playback and exporting using a wide range of codecs and timelines. This works out to just shy of 200 data points for each CPU, all of which combine into a single "Overall Score" that represents the overall performance of the system in Premiere Pro.

If we sort by the overall score, the Intel Core i9 9990XE is technically at the top of the chart, out-performing every other CPU we tested. It is only about 2% faster than the i9 9980XE, however, so it certainly isn’t going to revolutionize anyone’s workflow. Interestingly, this increase in performance is almost entirely from the slightly higher live playback performance where the i9 9990XE was about 5% faster than the i9 9960X and i9 9980XE. When exporting with Adobe Media Encoder (which is essentially the same as exporting directly through Premiere Pro), it simply performed on par with the i9 9980XE and i9 9960X.

In terms of performance, the Intel Core i9 9990XE is currently one of the fastest processors available for Premiere Pro CC 2019. However, it is only a few percent faster than a more standard CPU like the Core i9 9980XE or i9 9960X, which is going to be very hard to notice in the real world.

Since the performance gain is so small, it is likely going to be hard to justify using the Core i9 9990XE for Premiere Pro. The much higher power draw (which means a more robust and often louder cooling system), difficulty in sourcing, and lack of a warranty from Intel are all pretty major drawbacks for a small 2% performance increase. If you simply want to have the best of the best CPU for Premiere Pro, however, this definitely fits the bill. In addition, it is also terrific in other applications like Adobe After Effects, which can make it a solid processor for mixed workflows. 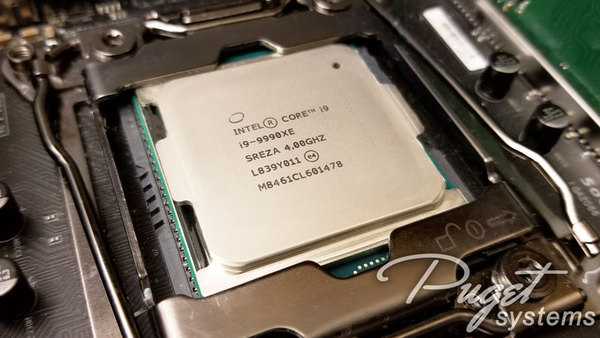 While we only tested Premiere Pro in this article, we highly recommend checking out our recent processor articles where we look at (or will be looking at) the performance of the i9 9990XE in After Effects, Lightroom Classic, and Photoshop as well as a number of other applications.