Skip to content
Always look at the date when you read an article. Some of the content in this article is most likely out of date, as it was written on May 19, 2009. For newer information, see our more recent articles.

With the large number of Intel Core i7 computers that Puget Systems sells, we have been on the look out for a good air-cooled CPU heatsink. We already offer the Core i7 stock heatsink as well as the Asetek LCLC closed-loop liquid-cooling system, but we wanted to find a heatsink to fit between the two extremes.

Modern high-end CPU coolers have been moving in one of two directions. They either incorporate closed-loop liquid cooling, or they try to maximize the surface area of the cooling fins. The Cooler Master V8 takes the latter to the extreme. There are four separate fin arrays (two on each side of the fan) connected to the base heatsink using two to four heatpipes. The Cooler Master V8 also features a wide range of supported motherboards (Intel LGA1366/LGA775, AMD 940/AM2/AM2+). Due to its massive size, we would expect the Cooler Master V8 to be able to cool any CPU currently on the market. Lets take a closer look to see if our first impressions are accurate.

The box containing the V8 is pretty standard. It has the usual promotional picture and specs table. After opening the box, the heatsink itself is enclosed in molded plastic to protect it during shipping. Also included is a bag with the mounting accessories and the manual. The packaging is simple and does it’s job well.

Taking the heatsink out of the packaging, we get our first feel of just how heavy this cooler is. Cooler Master’s specs sheet lists the cooler at 865g (almost 2 pounds)! The finish on the bottom of the heatsink is smooth with no manufacturing marks. Its not a mirror, but it has been polished to provide a good shine.

The included fan is a 4-pin PWM fan with an attached potentiometer. The potentiometer screws into an included PCI bracket for easy access once the heatsink is installed in your system. The fan itself is held in place with two standard fan screws at the bottom and is attached to the plastic cap using a clamp-style mount. The plastic cap is designed to hold the fan in place as well as to keep the air flowing in the right direction. The cap itself is held in place with four hex-head screws. Cooler Master includes an allen wrench so as long as you have a standard screwdriver, you will have all the tools needed to replace the fan.

The Cooler Master V8 has a very secure mounting system. Considering the size and weight of the cooler, this is a necessity. However, mounting the heatsink has to be done when the motherboard is from the case.

The first step is to attach the mount arms to the main heatsink using four screws. After that, four double-threaded screws fit through the arms. These screws are what actually go through the motherboard and are reverse-threaded so that when the nuts are tightened the screws doesn’t loosen. A few rubber washers round out the mounting above the motherboard.

Under the motherboard is a standard backplate designed to spread out the pressure from the screws across a larger area. Once the screws pass through the backplate, four nuts are used to secure the heatsink to the motherboard. Cooler Master includes an tool that allows you to use a standard screwdriver to tighten the nuts.

While this mounting is very secure, the lack of springs or other tension devices means that it is possible to exert uneven pressure on the CPU. The mount arms work a bit like springs, but it is still possible to over-tighten the nuts and possibly crack the CPU die. The weight of the heatsink also makes it fairly difficult to install alone. You really want a helping hand when installing this heatsink. However, once its mounted, it is not going to move a millimeter.

Once the heatsink is mounted, its time to install the motherboard into the case (we used an Antec P182). The size of the cooler makes plugging in cables a little difficult in the CPU area. With our test motherboard (Asus P6T Deluxe), the only problem cable was the 8-pin ATX power cable.

With the cooler installed, the size of it really becomes apparent. When the case’s side panel is installed, there is literally only one or two millimeters of clearance between the cooler and the side panel. This tight tolerance has an added benefit in that it limits the heatsink’s ability to move during transport. So while the weight of the cooler makes it a concern during shipping, the size should actually lower the likelihood of damage.

To test this cooler, we used a combination of our most popular components. Temperatures were recorded using Speedfan and verified with CoreTemp. The hottest core on the CPU is our recorded CPU temperature.

We run more than just a CPU load test since other components in a system (GPU, HDD, etc) can greatly affect the temperature inside the case, which changes how well a cooler performs. We have always felt that this gives a more realistic measurement of how well a cooler will perform in the hands of the typical end-user.

For case cooling, we are using 4 Antec Tricool fans. We first run the tests with the fans set to low, then run the tests again with the fans set to high. This gives us an indication of how well the cooler does in a low airflow environment compared to a high airflow environment. We also tested the heatsink with the included fan(s) as well as a Nexus D12SL-12 PWM fan. This gives us a better basis to compare just the heatsinks and to remove the included fans from the equation. All testing is done with Asus’ Qfan enabled, which raises/lowers the fan speed depending on CPU temperature. Once the CPU gets to 65 degrees, the fan will be running at full speed. 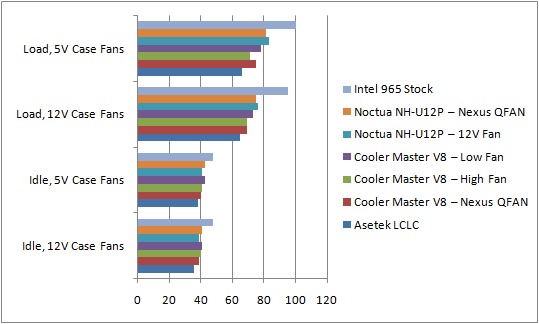 As you can see by the chart and graph, the Cooler Master V8 does very well compared to the other heatsinks. While it is not able to perform as well as the closed-loop liquid-cooled Asetek LCLC, it does out perform the other traditional air-coolers, and it does so with very quiet operation.

From this data, it is also clear that when using the included fan, your case does not need to have a huge amount of airflow. The difference between the case fans set to low and high is a matter of only a few degrees. Unless overclocking is involved, there shouldn’t be any need to have your case sound like a jet engine. When using the Nexus fan however, the increased airflow did lower the CPU temperature by 6 degrees.

Overall, this is one of the best aircooled heatsink we’ve seen. The only downsides we can find is the weight of the heatsink and the fact that the motherboard needs to be taken out of the case any time you need to remove the heatsink.

Performance: 9/10
While not able to match liquid cooling, it out-performs any aircoolers we’ve tested.

Mounting: 9/10
This cooler isn’t going anywhere. Its more likely for the motherboard to snap then to have this cooler come off in transportation

Acoustics: 8/10
The included fan is nearly dead silent at idle, and barely audible under load.