The new 12900KS only offers a few percent faster performance than the 12900K for roughly 20% more cost. The main consideration is what is your primary concern? If it is shader compile times, then the base 12900K offers the same performance. If it is code compile or light baking, then AMD’s Ryzen 9 5950X is faster.

Since then, the wider availability of DDR5 memory and improvements in thread scheduling has allowed them to expand their performance lead over AMD in a number of workflows. And today, Intel is launching yet another model to their 12th Intel Core lineup: the Intel Core i9 12900KS. 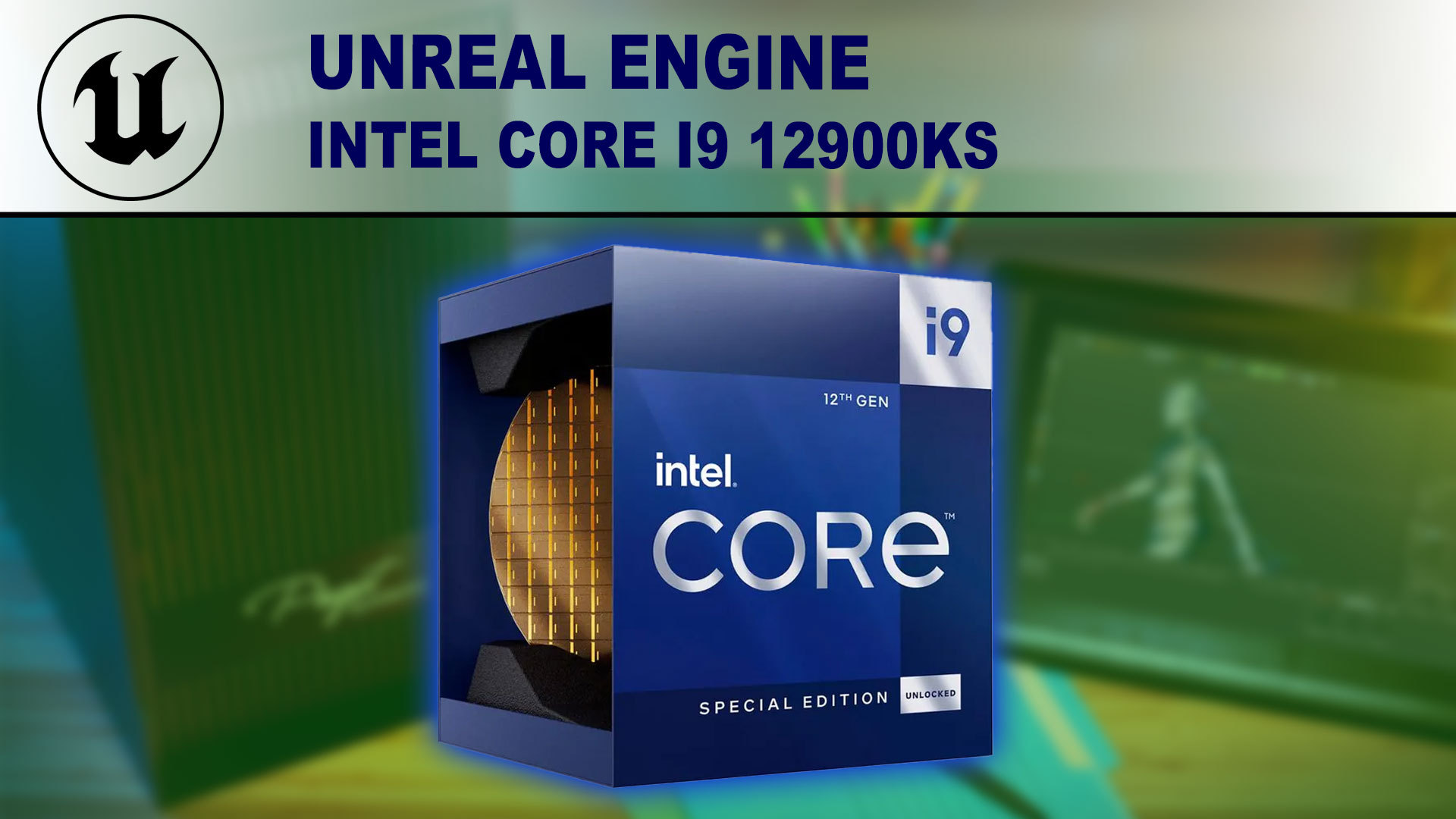 In this article, we will be examining the performance of the new Intel Core i9 12900KS compared to the 12900K, as well as the AMD Ryzen 5900X and 5950X. If you are interested in how these processors compare in other applications, you can check out the summary of all our testing results – and links to more detailed analysis – in our Intel Core i9 12900KS Review Roundup article.

As for the test platforms, we want to point out that due to the wider availability of DDR5 RAM, all our testing is now using DDR5 on any platform that supports it (currently just Intel Z690). We try to stay within spec for memory speed whenever possible, which is why we are using 2x32GB of DDR5-4800 RAM on the Intel platform. While the move to DDR4 to DDR5 can improve performance by a decent margin, the speed of the RAM speed doesn't make a big difference in most content creation applications. If you want to read more about the impact of DDR5 RAM speed, we recommend checking out our Impact of DDR5 Speed on Content Creation Performance article. 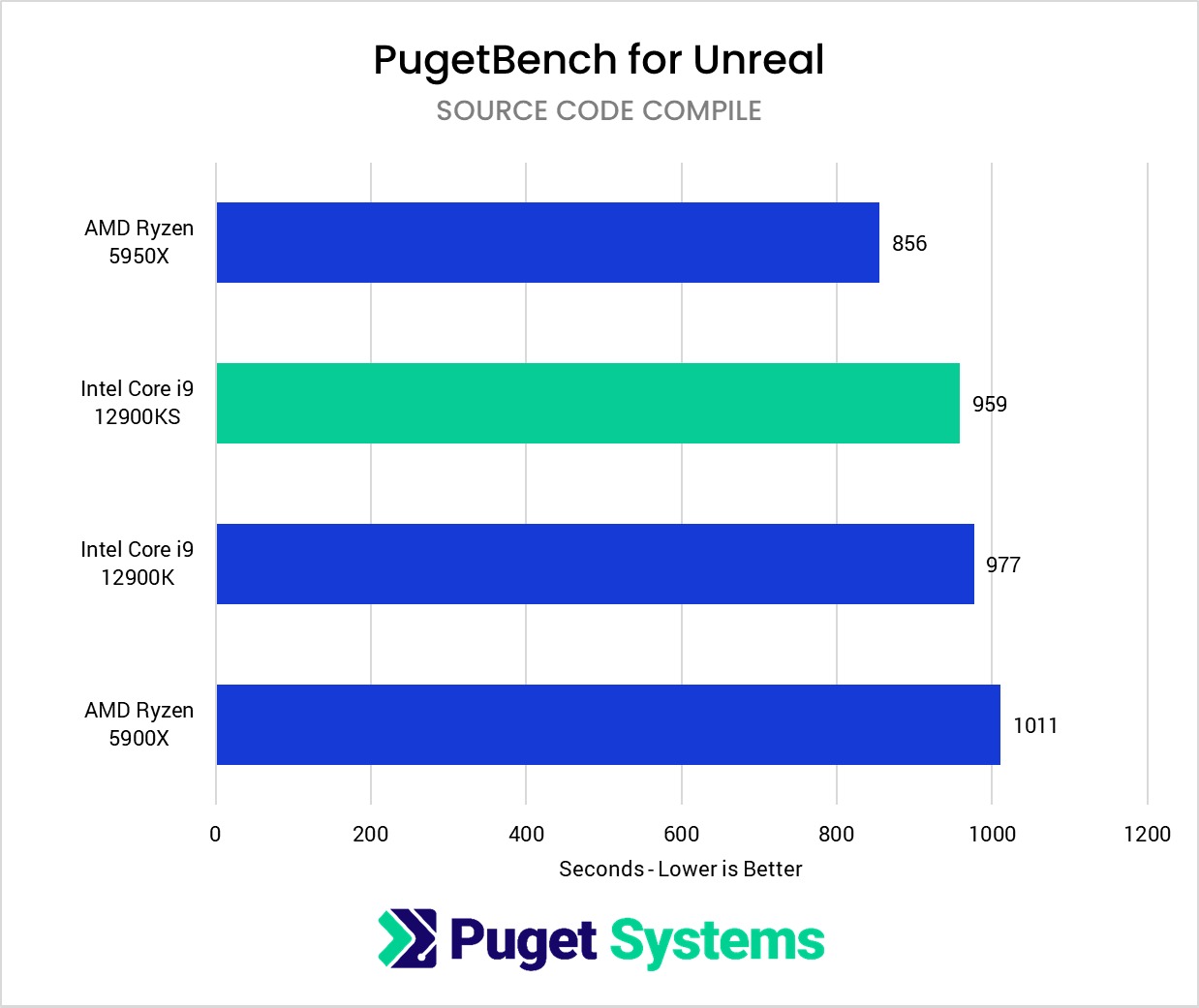 The new Intel 12900KS was only able to compile the engine 2% faster than the 12900K. Not the best return on investment. Compiling the engine source code in Visual Studio 2019 still favors the AMD Ryzen 9 5950X. 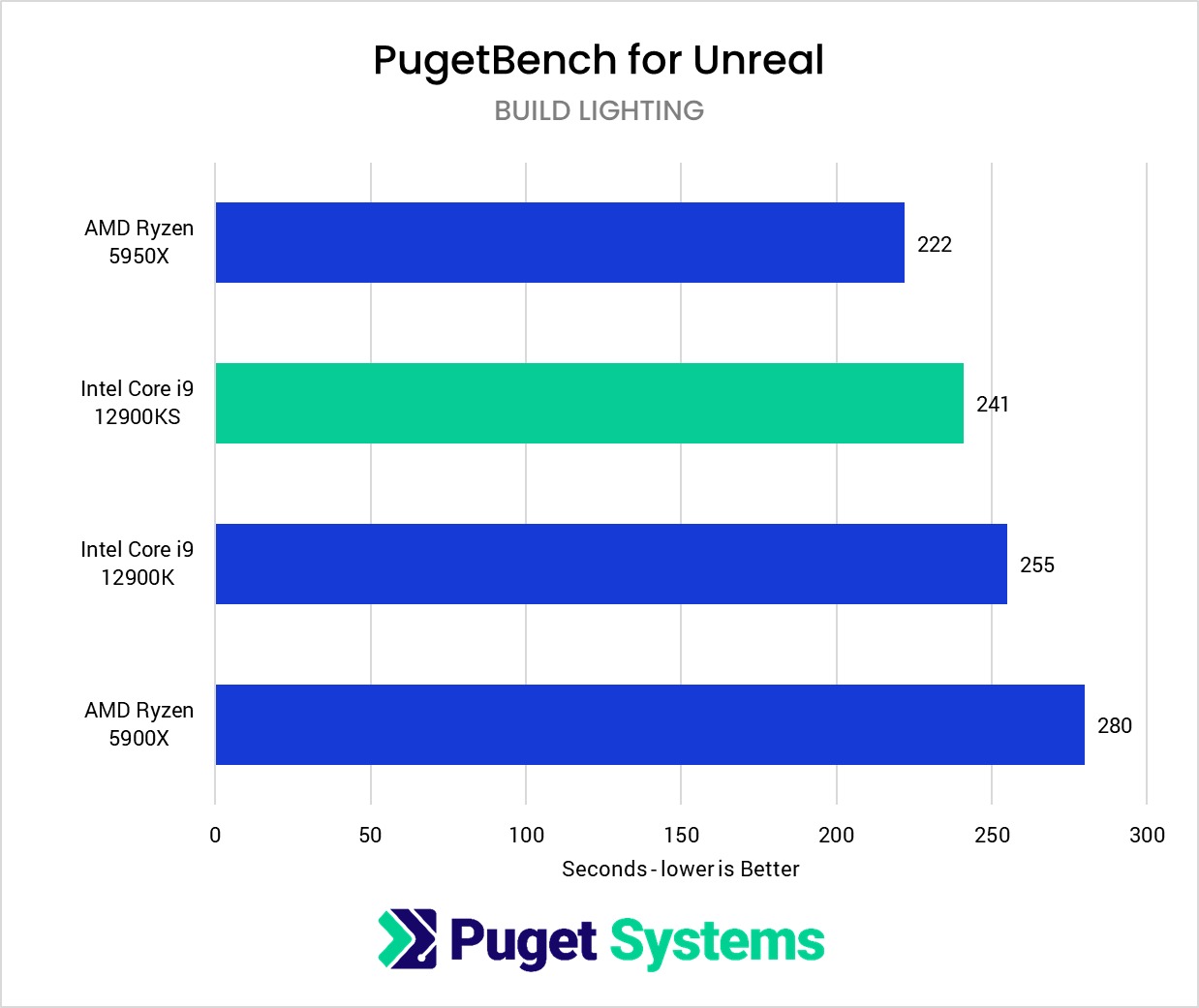 Light baking is still a very integral part of game development and ArchVis. While GPU lightmass has greatly improved and looks to be the future of this process (not to mention the real-time improvements of UE5’s Lumen) CPU based light baking is still part of many users’ workflows. The 12900KS does show a roughly 5% gain over the 12900K but still lags behind the 5950X by about 8%. 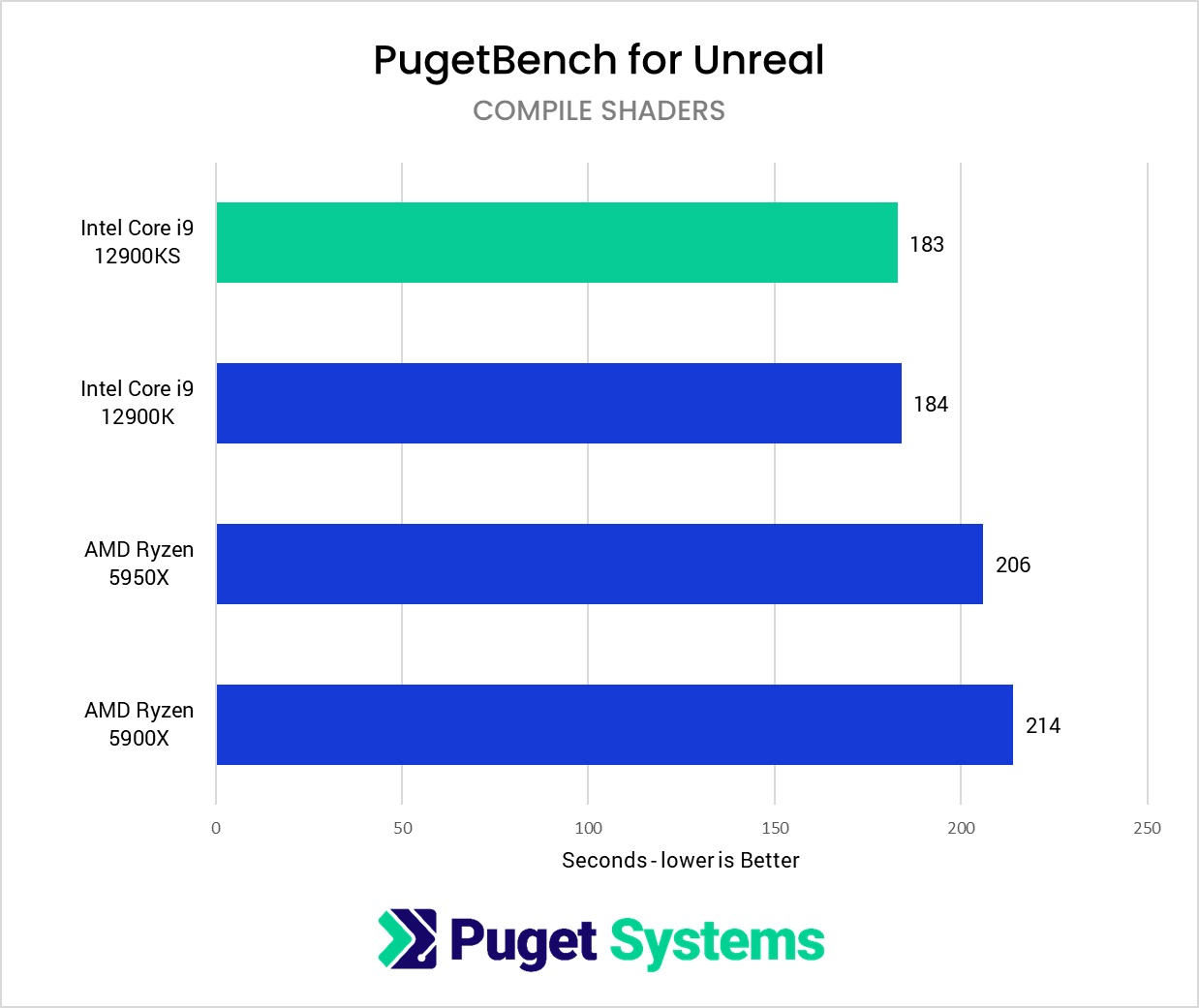 Compiling shaders is something that everyone working with Unreal has to contend with. Some only have to wait for a few shaders to compile ever once in a while, others see thousand on a regular basis. Because this is a lot of small tasks that can happen in any order, it lends itself to high core count CPUs. As we saw in our review for the 12900K, this is a test that does favor Intel, likely due to the newer and faster DDR5 RAM it is using.

Unfortunately, the 12900KS failed to make any noticeable improvement over the 12900K, but it does still lead AMD’s best offering by roughly 12%. 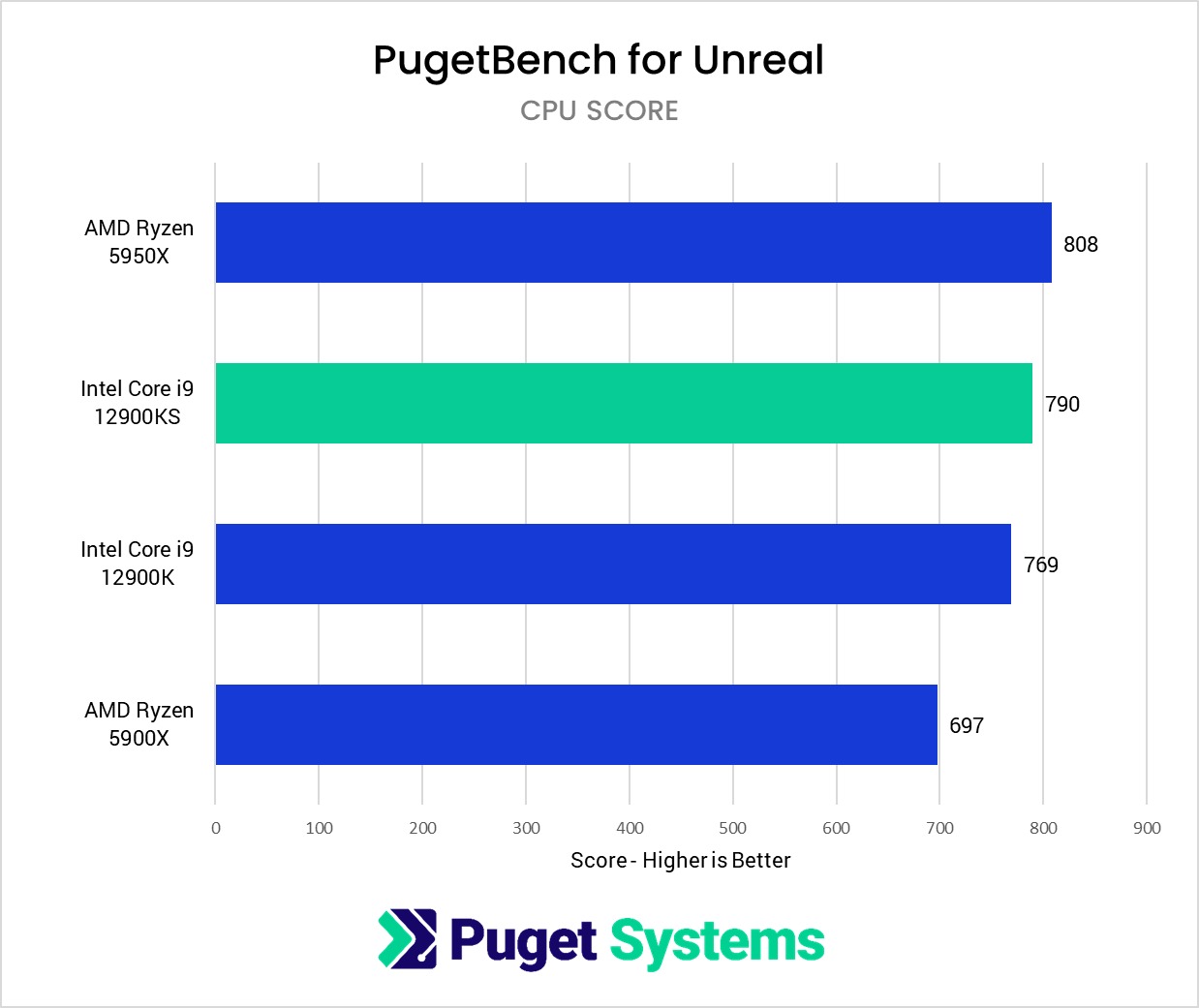 Averaging the three tests, the Intel Core i9 12900KS give around 2.5% better performance than the existing 12900K. The exact difference a user will notice depends on where they spend most of their time. The biggest difference is seen in Building Lighting. However, if you’ve migrated to GPU Lightmass, there isn’t much to be gained for the extra $150.

Is the Intel Core i9 12900KS Processor Good for Unreal Engine?

As we noted in the previous review of Intel’s 12th generation CPUs, they have made significant gains in performance in professional applications such as Unreal Engine. Many of the cumbersome tasks in Unreal engine prefer high core counts and tend to fair better on Threadripper systems. However many users don't want that high cost or need the higher single-core performance for their 3d modeling applications, or motion capture software. For these users, Intel’s 12th generation CPUs are attractive. However, the new 12900KS only offers a few percent faster performance for roughly 20% more cost. The main consideration is what is your primary concern? If it is shader compile times, then the base 12900K offers the same performance. If it is code compile or light baking, then AMD’s Ryzen 9 5950X is faster.

Going into our testing, we were a bit worried about the higher base power draw of the 12900KS, but throughout our testing, we didn't notice any issues. Our standard 120mm Noctua heatsink was still more than enough to keep this CPU cool, and there was no noticeable increase in fan noise.

Keep in mind that the benchmark results in this article are strictly for V-Ray and that performance will vary widely in different applications. If your workflow includes other software packages (we have similar articles for a number of other applications that can be found in our Intel Core i9 12900KS Review Roundup article), you need to consider how the system will perform in those applications as well. Be sure to check our list of Hardware Articles to keep up to date on how all of these software packages – and more – perform with the latest CPUs.