The NVIDIA RTX3080Ti is out and will hopefully be available to ease the difficulty that people are having finding high-end GPUs for their work (or play). I think the intention for the 3080Ti is to provide a GPU with performance near the RTX3090 but with the 12GB memory size being more appropriate for gaming use.

For computing tasks like Machine Learning and some Scientific computing the RTX3080Ti is an alternative to the RTX3090 when the 12GB of GDDR6X is sufficient. (Compared to the 24GB available of the RTX3090). 12GB is in line with former NVIDIA GPUs that were "work horses" for ML/AI like the wonderful 2080Ti.

There is definitely a use case for the RTX3080Ti for computing. It may be reasonable to use 3 of them in a system with the blower designed cards. 4 GPUs would likely require power limiting They do run a hotter than a RTX3080 though, and use what seems to be the same cooler as the 3080(on the FE cards)

Given the "relatively small" price difference and advantages of the RTX3090's larger memory size. I would probably recommend "leave the RTX3080Tis for the gamers!" ... but, these days you may have to go with whatever is available! It may come do to needing the extra memory of the RTX3090 or not. The "OOM" (out of memory) error when you are working on a problem can be very discouraging.

In this post I present a few HPC and ML benchmarks with the 3080Ti mostly comparing against the 3090. This is not a comprehensive evaluation of the 3080Ti but should give you and idea of performance for numerical computing tasks. Note I have comparisons in the charts using the NVIDIA A100 PCIe, 40GB, high-end compute-GPU. The A100 is in a whole different class over the RTX series! It's the most impressive computing device I've every used! (but, very expensive and passively cooled)

Keep in mind these are "Benchmarks"! I made an effort to find (large) problem sizes and good parameters that would showcase the hardware. Measured GPU performance is particularly sensitive to problems size (larger is generally better).

For details on how the Enroot container runtime was used please see these posts,

The charts and discussion below should give you a sense of the numerical computing performance of the RTX3080Ti. 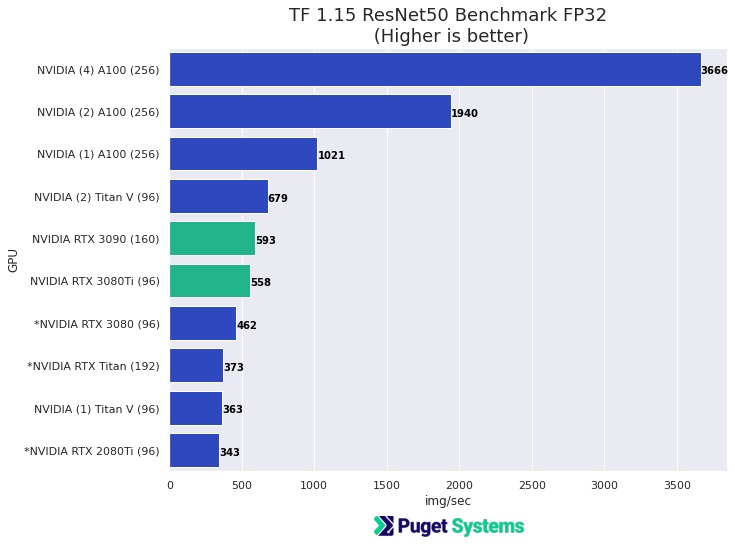 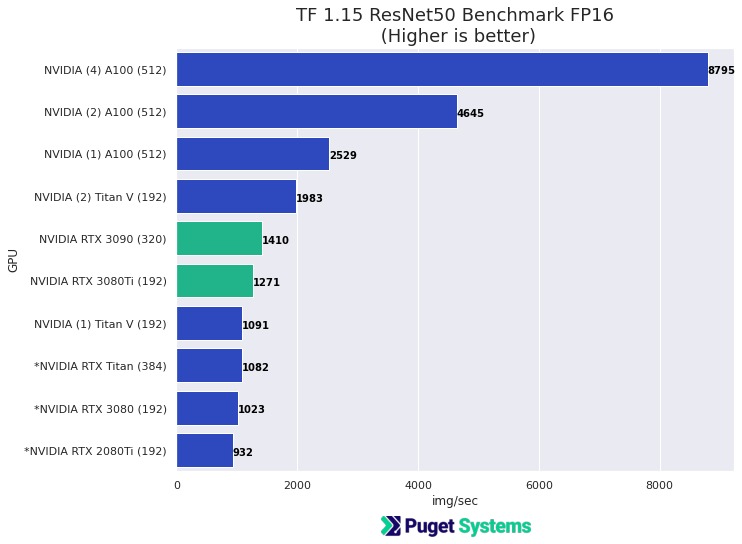 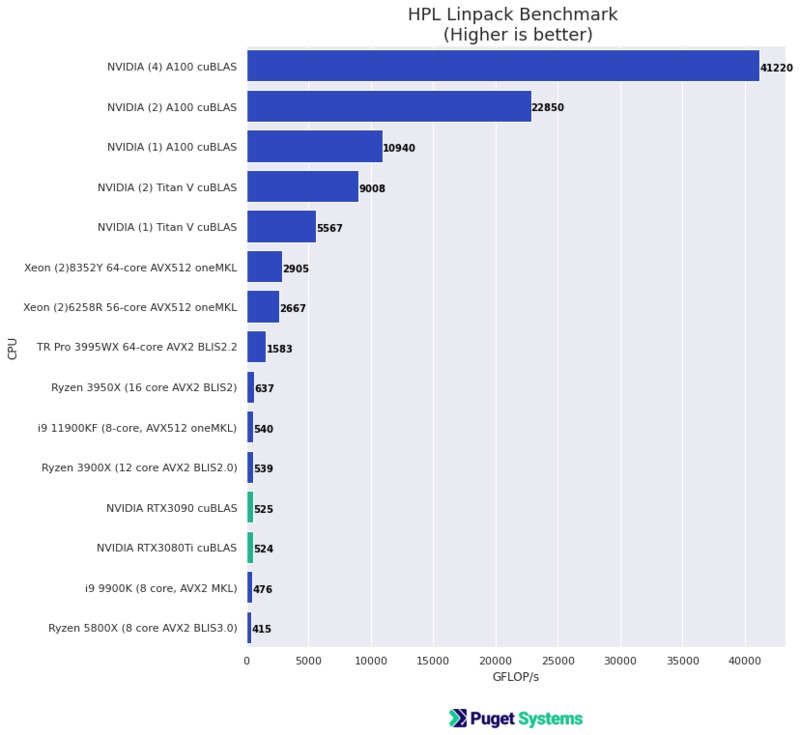 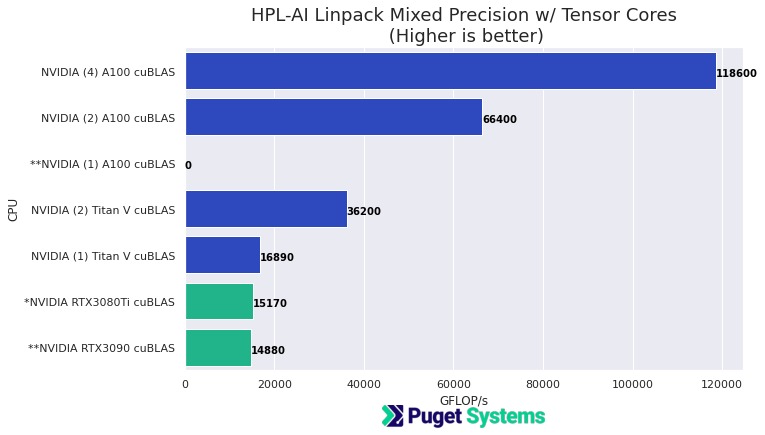 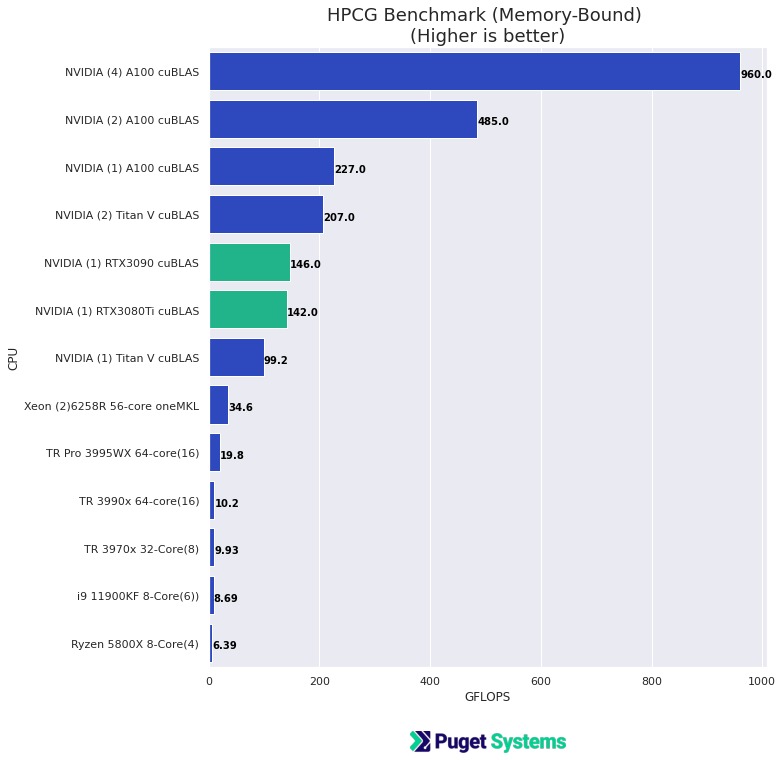 The main takeaways are:

A couple of other things to consider about the RTX 3080Ti,

I think the RTX 3080Ti is a very good GPU and would do well in a ML/Ai or Molecular Dynamics Workstation. However, **my recommendation is to spend the extra money on the 3090 and have twice the memory** and "maybe" a better designed card. I think the 3090 is more likely to hold up better under heavy compute usage but I can't substantiate that! The extra memory alone on the 3090 is reason enough to recommend it for compute. When you need the memory it is a "showstopper" or, at least a big nuisance, when you don't have it. In any case availability is unknown at this point. Hopefully cards will be available and the RTX 3080Ti will relieve some of the pressure for the high-end card availability.