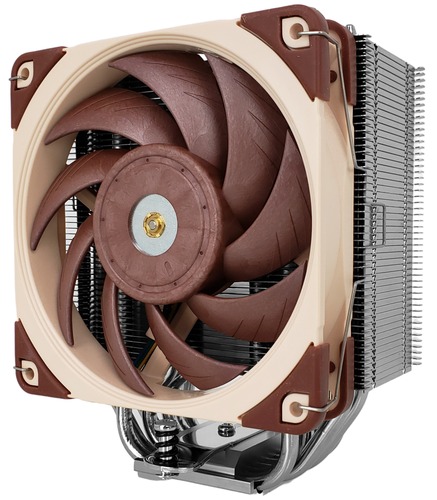 The Noctua NH-U12A is a high-end, tower heatsink and fan cooling system. It is thicker and has more heatpipes than the less expensive NH-U12S, providing better heat dissipation for high-end processors. The included fans are also more powerful than previous Noctua models, while still maintaining very low-noise operation even at maximum load. In fact, the fans are so good that we have found a single fan does just as good of a job at cooling as two in a push-pull configuration, and since the second fan can block access to RAM slots on some motherboards we have opted to source it directly from the manufacturer with a single fan installed instead of two. We are passing the cost savings that provides along to you, our customers.

William George (Product Development) Says:
Noctua fans and heatsinks are of the highest quality, and extremely quiet. This particular model has a beefy heatsink and uses the latest Noctua fans, which push even more air than past designs without increasing the noise level. This variant works with current Intel Core and Core X processors as well as AMD Ryzen models (and some older chips as well).
Model: Noctua NH-U12A

Manufacturer
Specifications
Configure a custom computer with the Noctua NH-U12A.