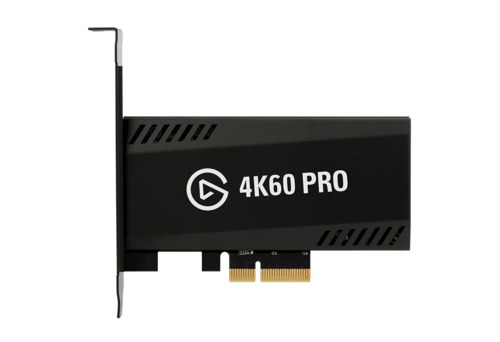 The Elgato 4K60 Pro is a HDMI capture card. It works by sitting between the video source and the monitor or TV to which it is displaying - so it has HDMI input and output ports for those two connections. It can both record and pass through video at up to 4K and 60fps (sometimes shortened to 2160p60). Elgato includes their own software, but this card also works well with popular applications like Open Broadcaster Software (OBS) and XSplit.

William George (Product Development) Says:
This card can both capture and pass through a HDMI signal with up to 4K resolution, but recording at high resolutions and high frame rates needs a powerful video card as well. Systems without a dedicated, high-end NVIDIA graphics card will be limited in this regard. With a Core i9 10900K, for example, I found that 4K at 30fps was doable but trying to push 60fps resulted in a lot of dropped frames. 1080P should be doable at 60fps, though, at least with a decent processor.
Model: Elgato 4K60 Pro MK.2