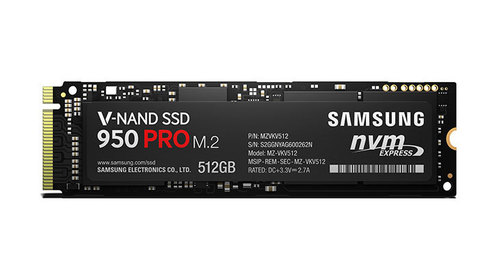 Samsung's 950 Pro line of solid-state drives is their first retail M.2 form factor SSD. It that runs at a full PCI-Express 3.0 x4 speed, which provides lots bandwidth and results in performance that is multiple times what a SATA III based SSD can provide. This 256GB model has sequential read speeds that peak at 2.2GB/s with write speeds around 900MB/s.

Please note that some M.2 slots on motherboards only run at PCI-E x2 speed, rather than the x4 this SSD is capable of. In such cases, performance will be limited by the speed of the slot. This drive also gets very hot during extended read / write operations (typically around 40-60 seconds), and if it gets too hot it will throttle down to prevent overheating. That will reduce performance by as much as 60% in such situations, but even then performance is well above what SATA-based SSDs offer.