If you stick around long enough, you'll recognize that many technologies come and go without a lot of fanfare. That has certainly been the case when it comes to online news consumption.

When I started to become interested in computers, ISPs like CompuServe and AOL dominated the scene. Both had groups one could join to learn more about thousands of different topics. Usenet groups were still prevalent, but had a higher learning curve. A few years later, the big search engines decided to get into the game. Both Yahoo and Google had groups that were easy to find, join and enjoy.

And more recently, social media platforms like Twitter, Facebook and Instagram make it easy to find topics and groups built around a community that's really not that different from what one could find on Usenet. When I asked my daughter this week why she keeps an active Twitter account, she explained how it provides a steady stream of links to news and entertainment articles.

Which brings me to...

There's a joke among the tech crowd that RSS is either on the way out or already dead. It's one of those technologies that works behind the scenes, but is often misunderstood. Some of that criticism is fair because it's a technology that was developed, fought for and ultimately defined by a number of large companies and developers who didn't always see eye to eye. So what is RSS?

RSS stand for Really Simple Syndication. It is a way to distribute content to a wide number of people. It's also a way for people to know when their favorite websites or blogs have been updated with new content.

When Google decided to retire Google Reader, many thought that would be the end of RSS. I wish Google had kept Reader around because it was a solid product that was more approachable than many RSS readers at the time. It wasn't perfect, and some people complained how it handled feeds, but it brought RSS to millions of people who may not have used it otherwise. In the age of social media, RSS has still maintained an important role of content distribution and sharing. As I've personally stepped back from social media, I've relied on RSS more than ever to deliver content to my desk or phone throughout the day. 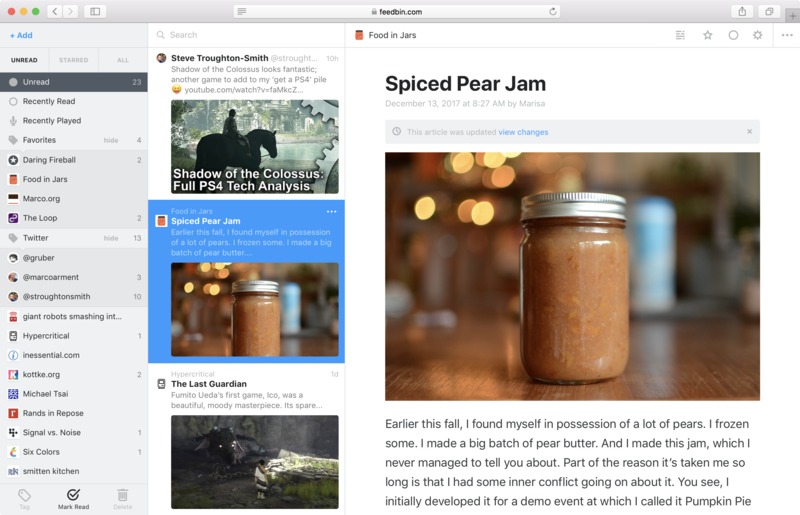 I usually start and end my day in my RSS feeds. It's my main news resource for a number of topics that include sports, science and writing. I also follow a number of excellent bloggers who comment on technology that interests me and helps me do my job better.

Some of you have probably used RSS for years. You already have the tools that fit your style. And if they are working well for you, I recommend sticking with them. This section is geared towards those getting started with RSS or who haven't quite found the right tool. There are many desktop and mobile tools that making organizing your news feeds a lot easier. These are two products I happily pay for and can recommend to just about anyone:

Feedbin - When Google retired Reader, a number of services stepped up to fill the void, and Feedbin is the gold standard of them all. No, it's not free, but it's well worth the $5 a month. I love its intuitive design, stability, and ability to sync with a number of mobile apps. Free services like Feedly exist, but you'll have to puts up with ads within the application or even the feeds. Feedbin is my main hub when it comes organizing my feeds, and web-based design is gorgeous for those times I want to read on my Windows PC or MacBook Pro.

Reeder - If I could only have one app on my iPhone it would be Reeder. It's simply my favorite iOS app of all time because it was designed by someone who gives a damn. It's elegant and simple to use, and the advanced features are easy to access. But mostly, it works exactly how I expect it to work. Reeder syncs my feeds with Feedbin, so I can pickup where I left off whether I'm on my PC, Mac or iPhone. I'd rather go without a phone than go without Reeder. I love it that much.

If you're new to RSS, it's easy to feel overwhelmed. I recommend you start slow with a few of your favorite blogs or websites and go from there. Here are a few sites I've followed and enjoyed for many years:

Scripting News - One of the authors of RSS is Dave Winer, and he's written a blog since 1994. He's the person who introduced me to RSS in 1999, and I've followed his blog ever since. He writes about technology, politics, and life. If I could only follow one blog, it would be Dave's.

Gates Notes - Of course, Bill Gates has a blog, and he updates it frequently. You already know a lot about him, but did you know he's an avid reader and releases a list of his "must read" books throughout the year? Here's his list of 5 books to read this summer, and another list of his favorite books of 2018. When he's not recommending books, Gates writes about the planet, fascinating people in his social circle, and educational issues.

Seth Godin - I don't know if I'm going to come away happy or angry with this approach to marketing, but I'm never bored. Seth has updated his blog for 11 straight years with his unique approach to marketing. That's just mind-boggling, but it also means I can always find something to read when I visit. His posts are short and sweet and often unpack a marketing subject down to its most raw form. I feel more informed about the world when I read his blog. One example: Too Big To Care.

Lefsetz Letter - This blog is authored by Bob Lefsetz, who spent most of his career in the music industry. I'm not going out on a limb here to state that he's an acquired taste. Bob writes about music, but he also finds connections to politics, sports, journalism and technology. His writing can feel like a stream of conscience; you will either love or hate it.

Puget Systems - I had to include it! Puget Systems provides individual feeds for our blog content, technology articles and our HPC blog, written by Dr. Kinghorn. Or you can subscribe to them all in one feed.

So those are few of my favorites. What are some of yours?