Earlier this year I wrote about AMD's comeback, as their processors were being included in more than half of the workstations we sold. It has been a few months now, marked by a lot of hardware shortages in this industry, so I wanted to revisit the situation and look at some additional metrics regarding CPU sales here at Puget Systems.

When I wrote the previous blog post on this topic, our last full month of data was February of 2021 – where we saw AMD take 59% of our system sales and Intel got 41%. Fast forward a few months and those numbers are still very similar: in June of 2021, AMD had 60% of our sales and left Intel with 40%. July is looking like it might skew a little further toward AMD, but we're also not done with the month yet so it could vary further in coming days. 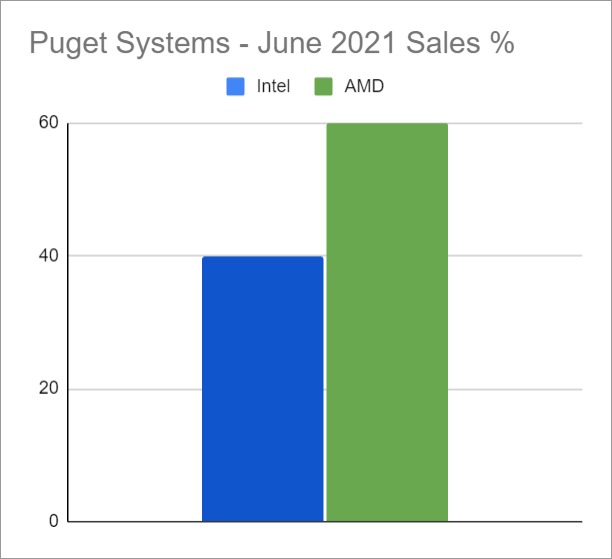 Looking beyond just pure sales numbers, another interesting metric is representation in the solutions we recommend to customers visiting our website. We perform a lot of application testing, which we use to determine what sort of configurations will be best for the workflows we focus on, and that is visible on our website as our Recommended Systems.

These systems change over time, both as new hardware comes out and takes over the best performance from older designs and also as we add (or sometimes remove) software from the list of workflows we target. I surveyed our current crop of solutions, and as of publishing time we recommend AMD on 32 of them and Intel on 22. 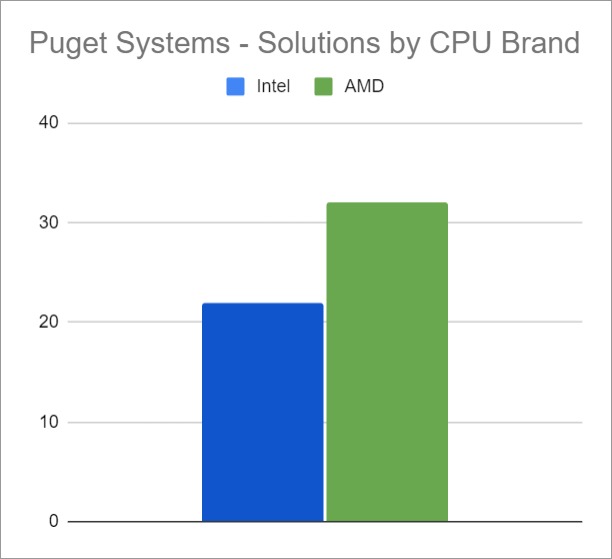 The ratio there almost exactly matches the 60:40 split we are seeing these days in actual sales, which is fascinating since some of these systems are far more popular than others. We also offer multiple configurations for several applications, sometimes providing both Intel and AMD options (if both manufacturers have top performing CPUs).

What Does the Future Hold?

AMD has done a fantastic job of competing with Intel on both performance and price in the last few years, which I hope to see continue for a long time. Intel has been fighting back, and their latest desktop chips give comparable or sometimes even slightly better per-core performance, but they still lag behind with regard to the number of cores available on both desktop and workstation-class processors.

If I had to guess – and I've gone and put myself in that position with the title of this conclusion – I think AMD's Ryzen will continue to dominate our consumer-class CPU sales until at least the next major Intel launch. Rumor has it that Intel's next offering in this range is going to bring DDR5 and even better performance, so that might be enough to take a chunk of sales back… at least until AMD can counter. On the workstation side of things, AMD's Threadripper and Threadripper PRO processors don't seem to have as close of competition from Intel for the foreseeable future. There are certainly some specific workflows, especially on the scientific computing side of things, where Intel's advanced instruction sets like AVX512 give them an advantage – but for content creation applications AMD has a strong enough lead that I don't expect anything to change dramatically in terms of market share during at least the last half of this year. I do expect AMD to bring the Zen 3 architecture from their Ryzen 5000 series processors up to the Threadripper line at some point, though, which should only serve to solidify their lead in that segment.