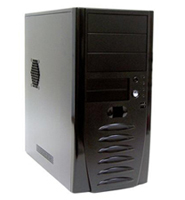 The computer case is pretty straightforward in concept. It's the chassis that everything else is assembled inside and offers a few minor conveniences. For example, many computer cases these days have easily accessible USB ports on the front of the computer, and sometimes even a headphone jack so that you can access these while sitting at your computer rather than having to climb behind it.

There is a greater selection of PC cases than any other component, and there's a wide variety of aesthetics, features, and prices. If you're having a system built for you by a system builder, odds are they've narrowed down your selection to a very few choices. This allows them to design effective shipping solutions, guarantee compatibility, and probably has aesthetics associated with company image.

Cases are an often neglected piece of hardware when it comes to carefully selecting your system components. Too often people choose form-over-function, giving them some flashy case that does a very inadequate job of keeping the system cool and quiet.

Even if you're not building your own computer from scratch, there's a lot to keep in mind about computer cases. They're the foundation of your cooling system, and a very large contributor to your system noise. Some are flimsy and plastic, others are steel and heavy. Inside, many are cramped with little space to expand, while others are large enough to fit 10 or more hard drives!

Cases are cooled by fans, and the placement, size and speed of these fans are critical to keeping your system cool and stable. So when considering computer cases, make your decision based on more than just the aesthetics! If you're ordering from a system builder, don't hesitate to ask them about your case.

As a general rule of thumb, look for two or three large fans, rather than a computer with 6 or more smaller fans. Larger fans are able to move far more air than small fans, while spinning at a lower speed. These larger fans keep the system cool, typically with less noise than smaller fans.

For more details on the relationship between your case and cooling, see the Cooling Systems page.

When shopping, I recommend that you decide how much of a premium you're willing to pay for a quality case, and if quiet operation is important to you. I spent over $200 on my last computer case, and have sold systems with far more expensive cases than that.

If your budget is tight, there are many inexpensive cases (>$50) that will do the trick. They won't feature the bells and whistles that many of the nicer cases do, and will likely be made from steel or plastic instead of aluminum - often regarded as the ideal material for a computer case. Check reviews of the system, see if there have been any reports of rattling or buzzing coming from poor construction. For higher end cases, there are nearly limitless options and permutations on various cases, truly giving you a huge selection.

If you're having your system built by a vendor, see if they offer choices on their cases. A lot of system builders use the case as a good place to cut corners and inflate their margins. Ask if they offer a high-quality aluminum case, and see if the case has 90mm or 120mm fans instead of 80mm fans.

Regardless, keep in mind that your case is a lot more than aesthetics. It's directly contributes to the noise, cooling, and longevity of your hardware.

I'm very picky about my computer cases. I'm a quiet computer enthusiast, so I demand very specific cooling systems from my case. I prefer the look and cooling efficiency of a metal case to a plastic one. I'm a big fan of Lian-Li cases, as well as Silverstone and Soldam (although the latter isn't currently available for sale in the US).

In the end, it's really hard to make judgments about a computer case without getting to see it in person. If you're buying on the internet, find a vendor and sales representative with whom you're comfortable, and see what they think about various computer cases.