On October 8th, AMD announced the new Ryzen 5000 Series processors with a range of advancements including a 19% improvement in IPC (instructions per clock) and unified 8-core complex among others. While the announcement was focused primarily on gaming performance, they did also promote performance improvements of 5% in Premiere Pro, 12% in V-Ray, 27% in SolidWorks, and 9% in GCC compile times.

To verify these performance claims and to see how they do in a range of other real-world scenarios, we have reviews looking at a number of applications across video and photo editing, game development, photogrammetry, and more. While this post includes a summary for each entry, we highly recommend reading the full article for programs you are interested in as we go into much greater detail in the individual reviews.

If you want to see the full specs for the new AMD Ryzen 5000-series processors, we recommend checking out AMD's page for these new CPUs. But at a glance, here are what we consider to be the most important specs:

Something to keep in mind is that specs are only the tip of the iceberg in terms of actual performance. While the core counts and even max boost frequency haven't changed much, the 19% IPC improvement AMD is advertising may automatically make each of the new CPUs up to 19% faster than the previous generation. With the changes to the cache structure and other behind-the-scenes upgrades, the difference with the new CPUs should be much more dramatic than the basic specs show.

Summary: In the past, there were arguments for using either an AMD or Intel processor for Photoshop, but with the new Ryzen 5000-series CPUs, AMD takes such a large lead that it will be very difficult to justify using Intel over AMD. Because Photoshop doesn't scale well with more cores, the higher-end Ryzen 9 5900X and 5950X might not be the best value for Photoshop since they are no faster than the Ryzen 7 5800X, but all three of these CPUs beat the Intel Core i9 10900K by a solid 10%. For those on a tighter budget, Ryzen 5 5600X outperforms the similarly-priced Intel Core i5 10600K by an even larger 22%. 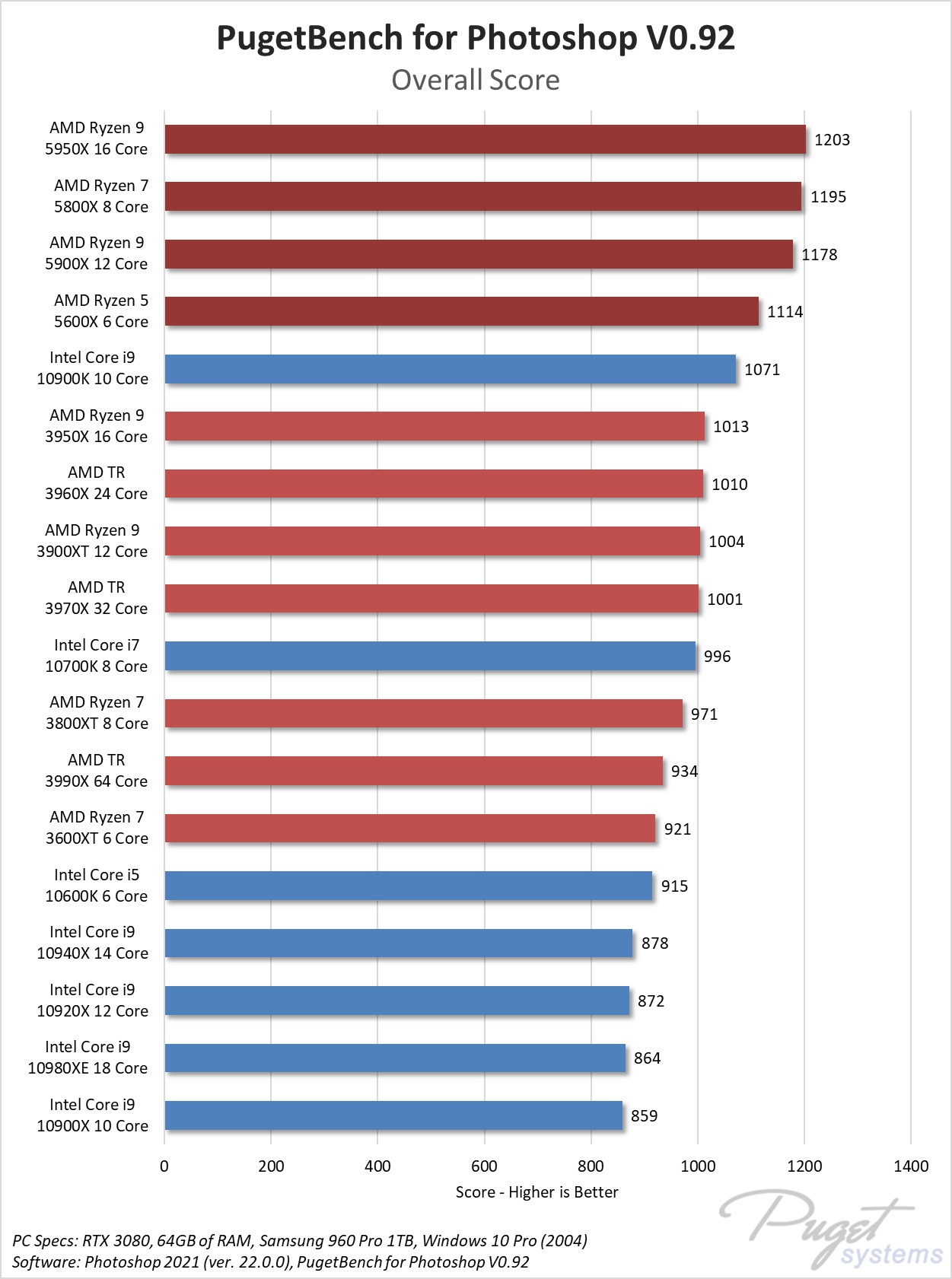 Summary: In the past, there were arguments for using an Intel processor for Lightroom Classic if you wanted to optimize for active tasks like scrolling through images, but with the new Ryzen 5000-series CPUs, AMD takes a solid lead no matter the task. We saw some odd performance issues with the Ryzen 9 5950X, but the Ryzen 7 5800X and Ryzen 9 5900X beat the Intel Core i9 10900K by a solid 14% and 21% respectively, while the Ryzen 5 5600X outperforms the similarly-priced Intel Core i5 10600K by a bit smaller 11%. 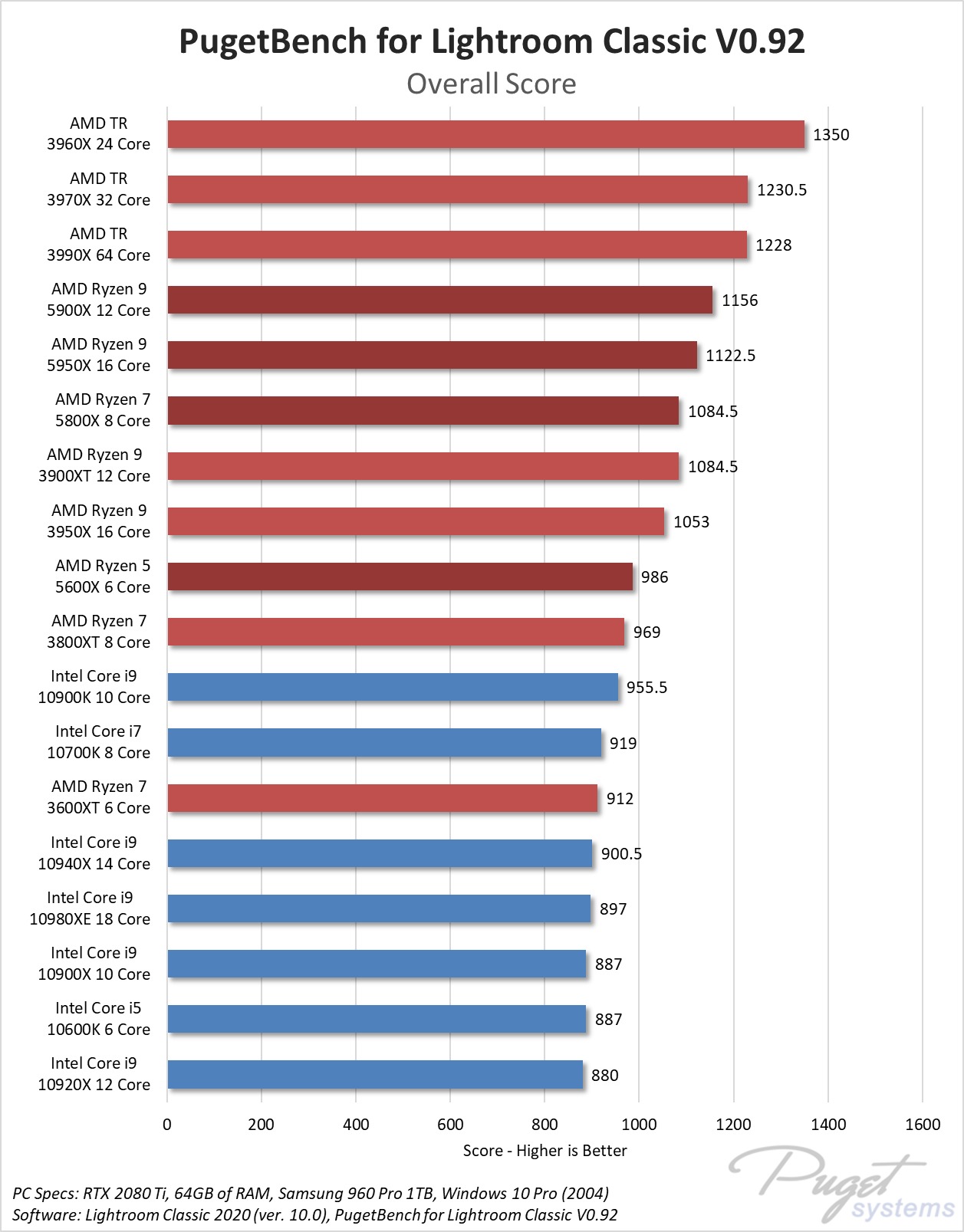 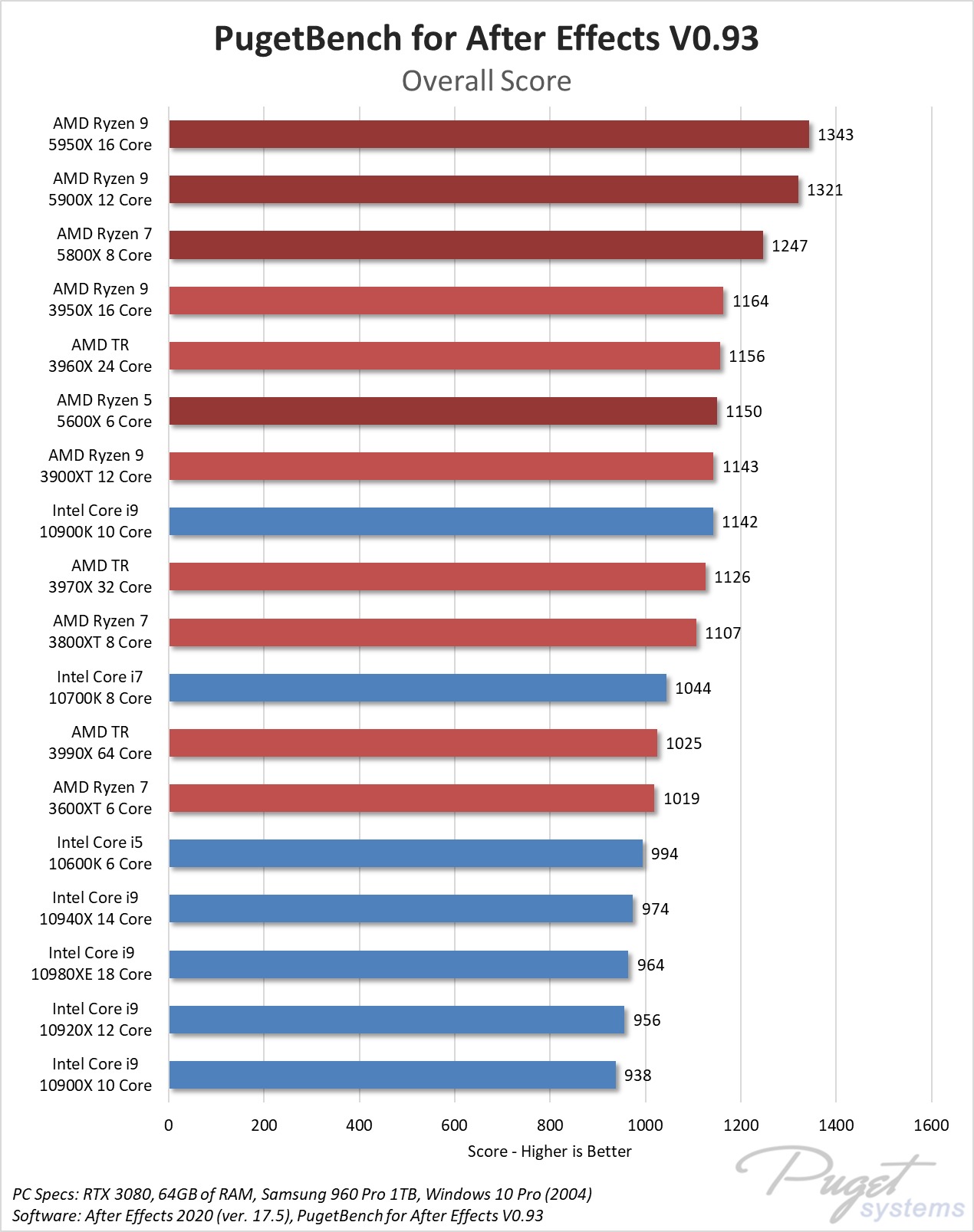 Summary: With Premiere Pro now supporting GPU-accelerated encoding/decoding of H.264/HEVC media, Intel is no longer an auto-pick for Premiere Pro, allowing AMD to show what they are capable of on a level playing field. At many points of the stack, the AMD Ryzen 5000-series CPUs do extremely well, solidly beating similarly-priced Intel CPUs by 12-20%. 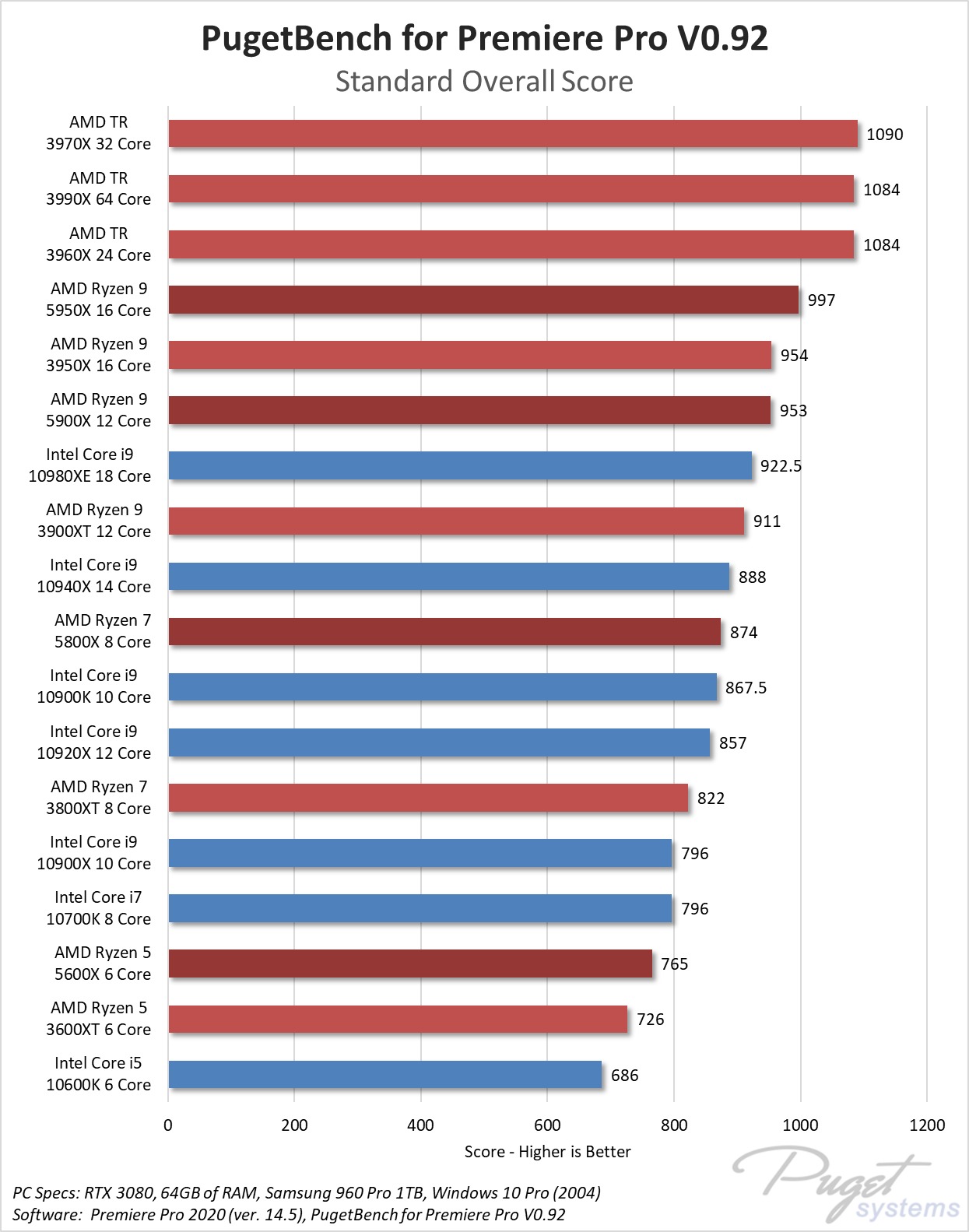 Summary: AMD has been a strong choice for DaVinci Resolve Studio ever since the launch of the 3rd generation Ryzen and Threadripper CPUs due to their higher core counts and inclusion of PCI-E gen 4. Interestingly, the new AMD Ryzen 5000-series processors are not much faster than the previous generation. But, it is enough for AMD to extend their lead over Intel. 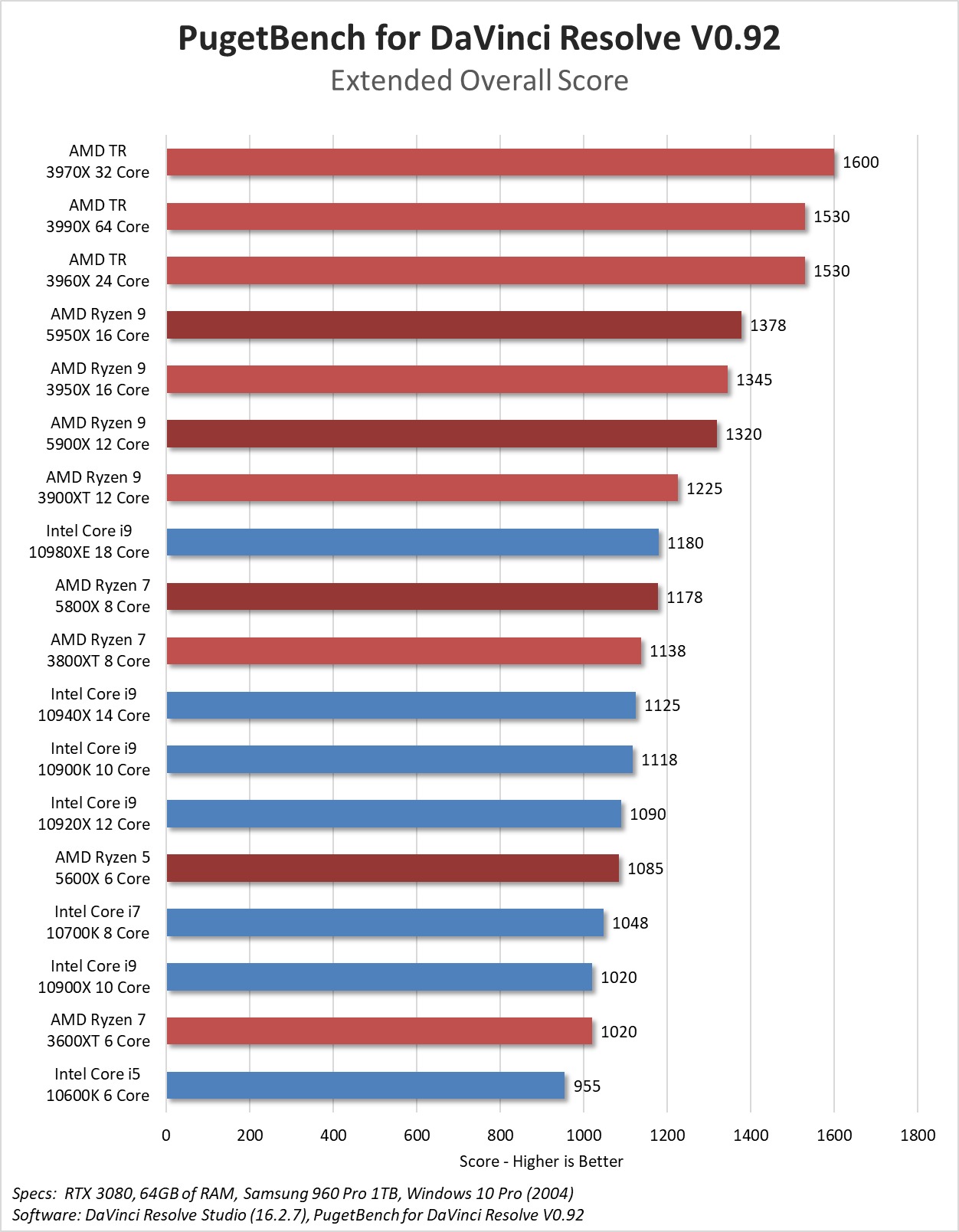 Summary: AMD's previous-gen Ryzen CPUs already provided a compelling option for Unreal Engine. The newly release Ryzen 5000 series CPUs have made it difficult to recommend anything else. They offer a 10-20% improvement over the previous generations and outperform any Intel CPU at similar price points or core counts.

AMD's Threadripper is still the top choice in Unreal Engine, taking the top three spots in every test. However, if you are looking for a lower-priced system or something in a smaller form factor, AMD's new Ryzen 5000 series is the way to go. 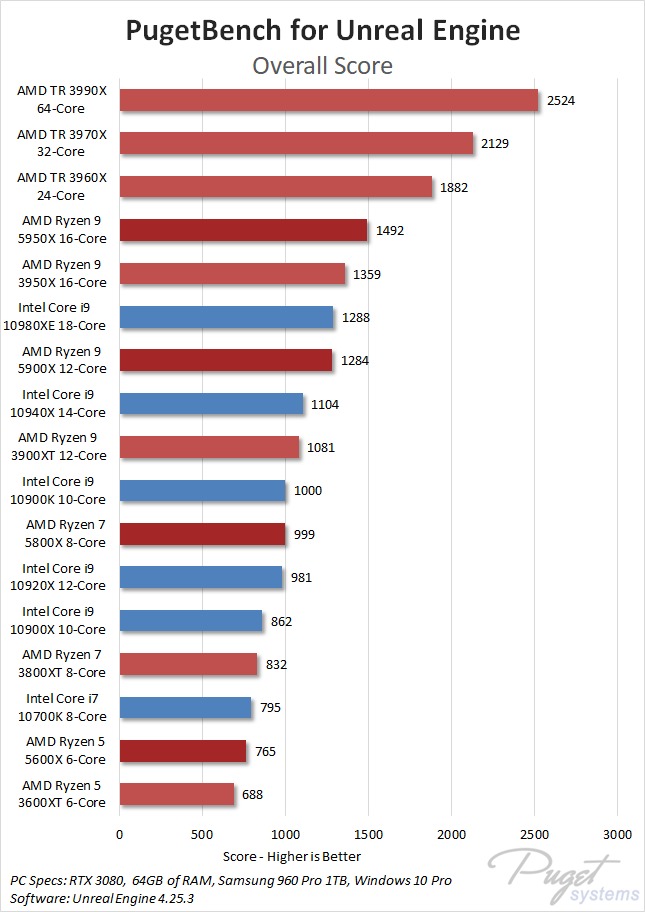 Summary: The fantastic single-threaded performance of these new Ryzen processors will make them excellent for working with modeling, animation, and physics in Cinema 4D – while also offering solid rendering speeds for their price point. 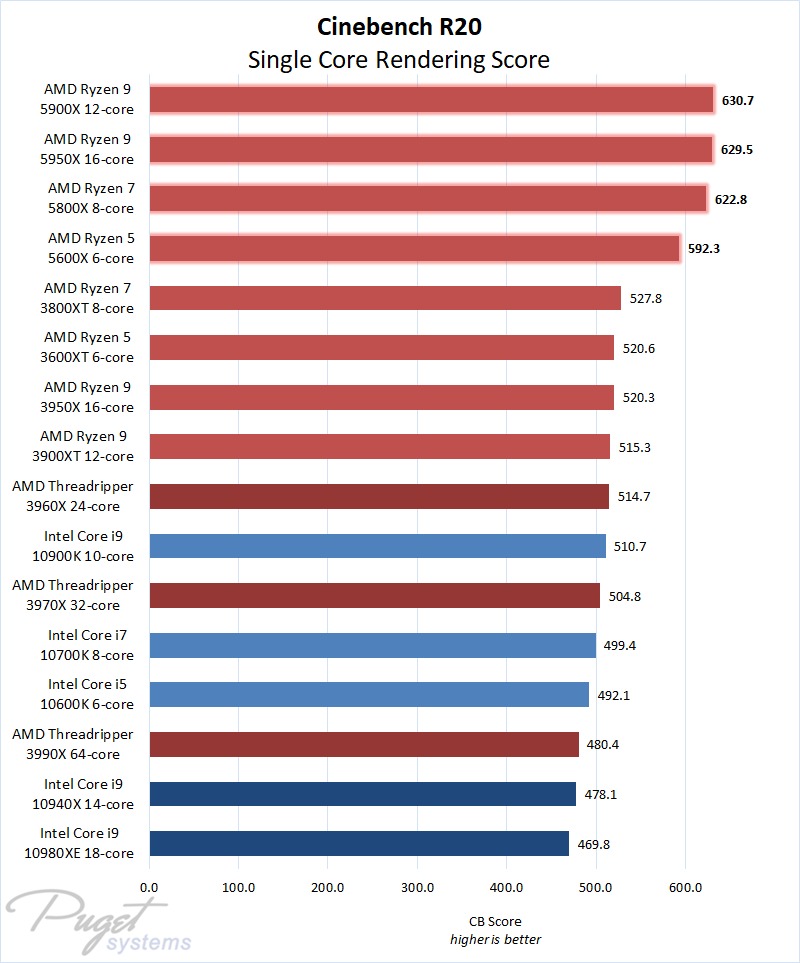 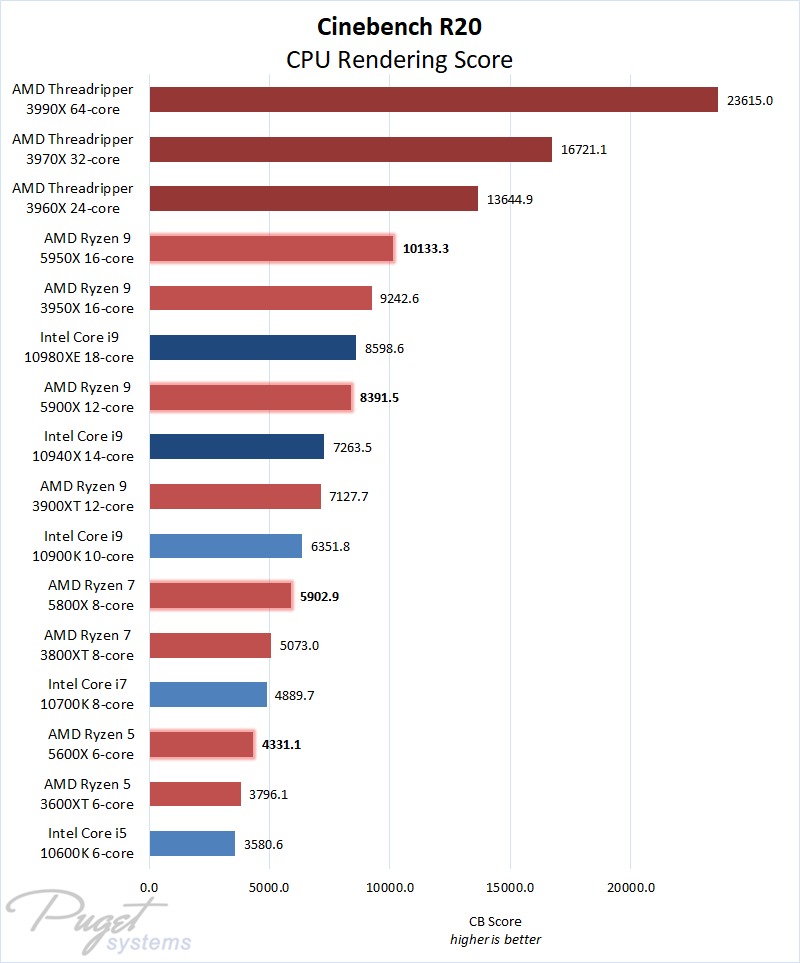 Summary: For the price, these new Ryzen processors offer great rendering performance – while also providing the best single-threaded speeds for modeling, animation, and other related tasks. Each model in the 5000 Series family is 10-20% faster in V-Ray Next than the corresponding model from the 3000 Series.

However, AMD's Threadripper processors are still the kings of single-socket rendering. It is also worth considering whether a GPU rendering engine or a hybrid that uses both the CPU and GPUs, could fit in your workflow. Those can scale much higher in performance within a single workstation. 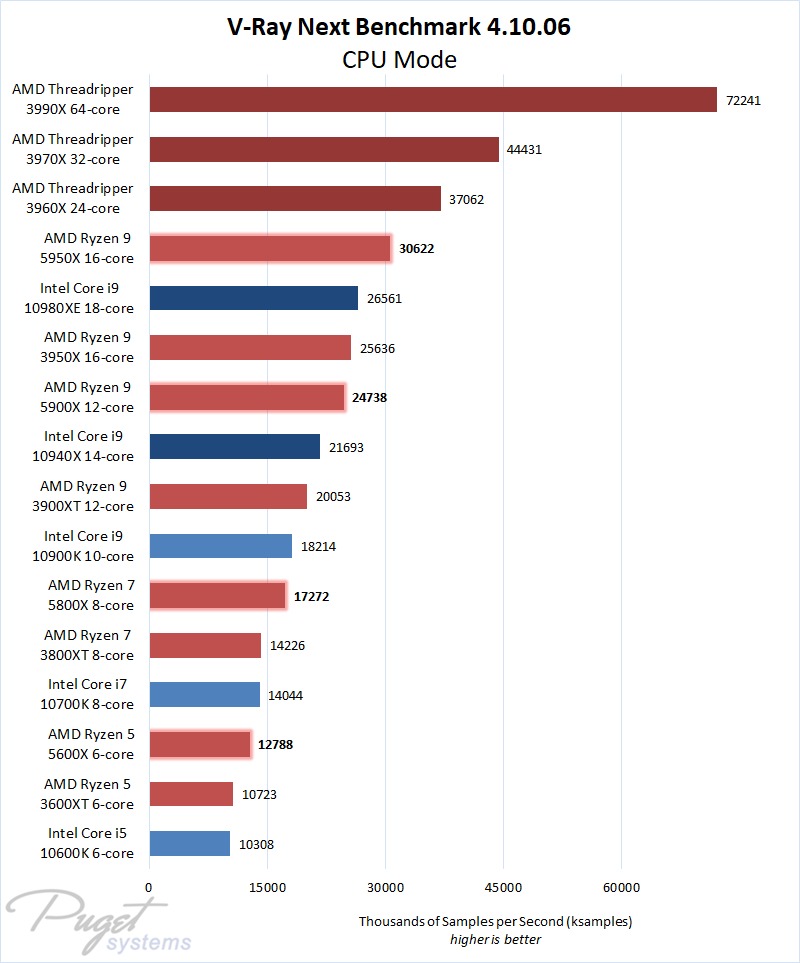 Summary: AMD's Ryzen 9 5950X is the fastest CPU we have tested yet in RealityCapture, and the 5900X and 5800X are both close behind. These processors offer fantastic per-core processing speeds, along with an ideal number of cores for this application.

The only limitation I can see to this platform is the maximum of 128GB with regards to memory support. That is not likely to be an issue in RealityCapture, but if it is a problem for anyone then I would advise moving to AMD's Threadripper processors as the next closest option in terms of performance. 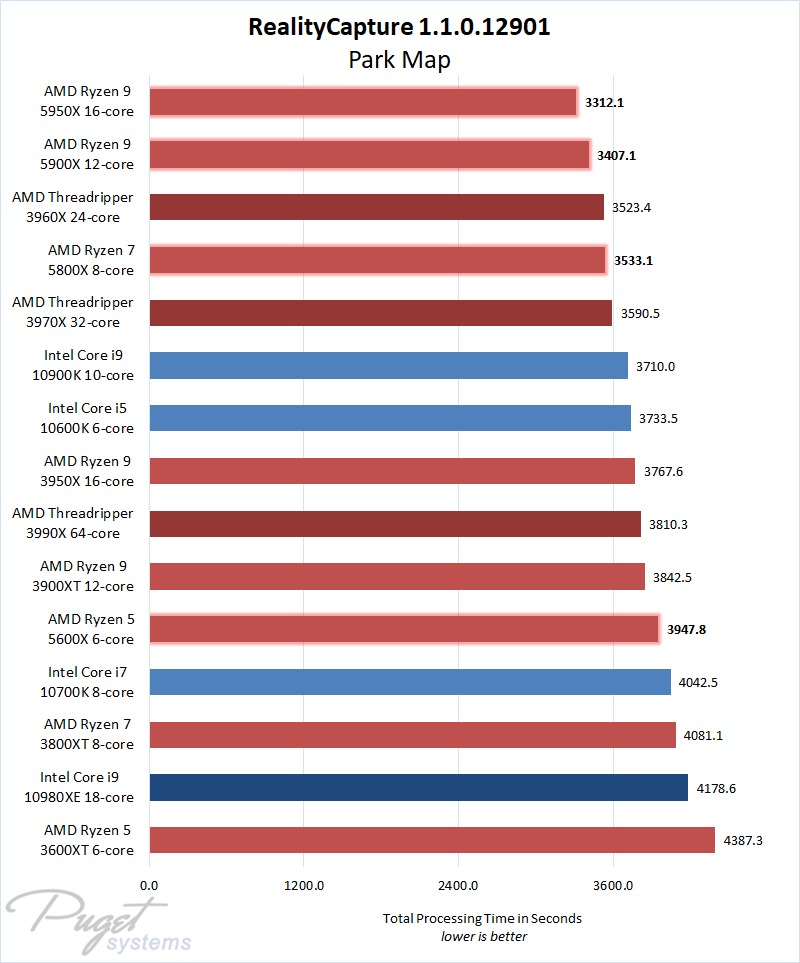 Summary: AMD's Ryzen 7 5800X is now our top-performing processor for working with maps in Metashape. The Ryzen 9 5950X and 5900X are slightly faster for dealing with complex models, rather than maps, and the only competing CPU we have tested that is in the same ballpark as these is Intel's Core i9 10900K.

Any of those four processors would be an excellent choice for photogrammetry in Metashape, but they do all share a single weakness: 128GB of maximum memory capacity. When working with extremely large image sets there could be times that additional RAM is needed, but a trade-off on pure performance would be required to get there. 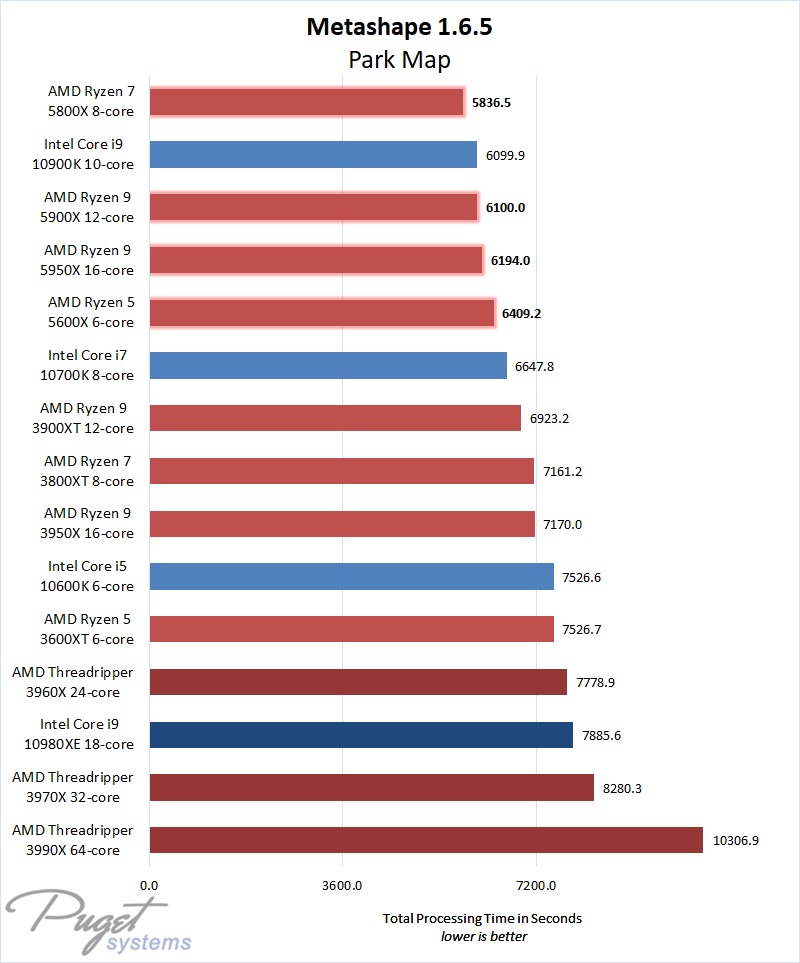 Summary: AMD's Ryzen 9 5950X is undeniably the fastest CPU for Pix4D – and the 5900X is a strong contender as well. Even the lower Ryzen 7 and 5 models offer better performance for the price than their older models or Intel's Core series equivalents. Most of these new CPUs are ~15% faster than the previous generation in Pix4D, while the Ryzen 5 5600X is "only" 10% faster than the 3600XT.

The only reason to go for a different model would be to access higher amounts of RAM (more than the 128GB limit of the Ryzen 5000 Series) for working with larger image sets, in which case AMD's Threadripper processors are not much slower and support up to 256GB. 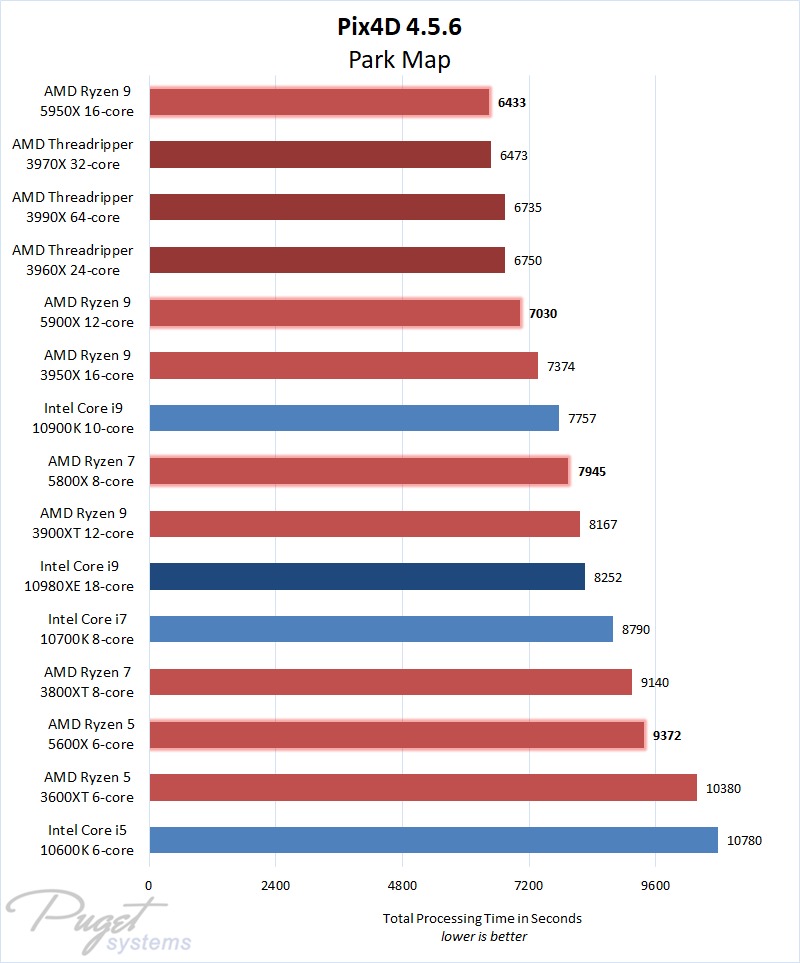 How well does the AMD Ryzen 5000 Series perform overall?

Across the board, AMD's new Ryzen 5000 series CPUs do extremely well – in most cases easily out-pacing similarly priced processors from Intel. The exact amount depends on the specific application, but the Ryzen 9 5900X and 5950X in particular do very well, beating the Intel X-series CPUs by as much as 40%!

In content creation applications like the Adobe suite, DaVinci Resolve, and Unreal Engine, the lower-end Ryzen 5 5600X and Ryzen 7 5800X beat the similarly-priced Intel Core i5 10600K and Core i9 10900K by around 10%. However, this performance is overshadowed by the Ryzen 8 5900X and 5950X which were both nearly 40% (or more) faster than the Intel Core i9 10900X and 10940X. To be fair to Intel, many of the applications in this category (especially lightly threaded ones like Photoshop and After Effects) are actually faster with the Intel Core i9 10900K than the more expensive Intel X-series processors. So, if you were to compare AMD and Intel-based not just on the price of the CPU, but also limiting it to the best performing CPU within that budget, AMD's lead would actually cap out at closer to 20%.

Further up the stack, however, the AMD Ryzen 9 5900X and 5950X take a commanding lead over Intel, performing up to 40% faster than a similarly-priced CPU from Intel. It is worth noting that if you are looking for the best rendering performance, the AMD Threadripper CPUs are even faster than the new Ryzen 5000 series and well worth the cost if they are within your budget.

In photogrammetry applications, the AMD Ryzen 5000 series is terrific, with either the Ryzen 7 5800X or Ryzen 9 5950X being the fastest CPU we tested depending on how well threaded the particular photogrammetry application is. The performance gains over Intel are not quite as pronounced as they are in the other categories we tested, but AMD maintains a strong 27% lead over Intel with the Ryzen 9 5950X. For the other processor models, the gain over Intel is less than 10%, but the Ryzen 5 5600X and 5900X still maintain enough of a performance advantage to make them a clear choice over the Intel CPUs that are currently available.

Overall, these new AMD Ryzen 5000 series processors are a great improvement over the previous generation, and in most cases place AMD in a solid lead over Intel. The Ryzen 7 5800X is the only model that faltered in some applications, and in some cases was actually a hair slower than the similarly-priced Intel Core i9 10900K.

The Ryzen 9 5900X and 5950X, however, are particularly good versus the Intel X-series CPUs that are in the same budget range. Performance gains of nearly 40% are not uncommon, although that is somewhat artificially inflated since the lower priced Intel Core 10th Gen CPUs can actually be faster than the X-series in many applications.

If you are looking for a workstation with one of these new Ryzen CPUs, we anticipate moving a significant number of our systems to the AMD Ryzen 5000 series in the coming weeks. Be sure to visit our solutions page to view our recommended workstations for various software packages, our custom configuration page, or contact one of our technology consultants for help configuring a workstation that meets the specific needs of your unique workflow.