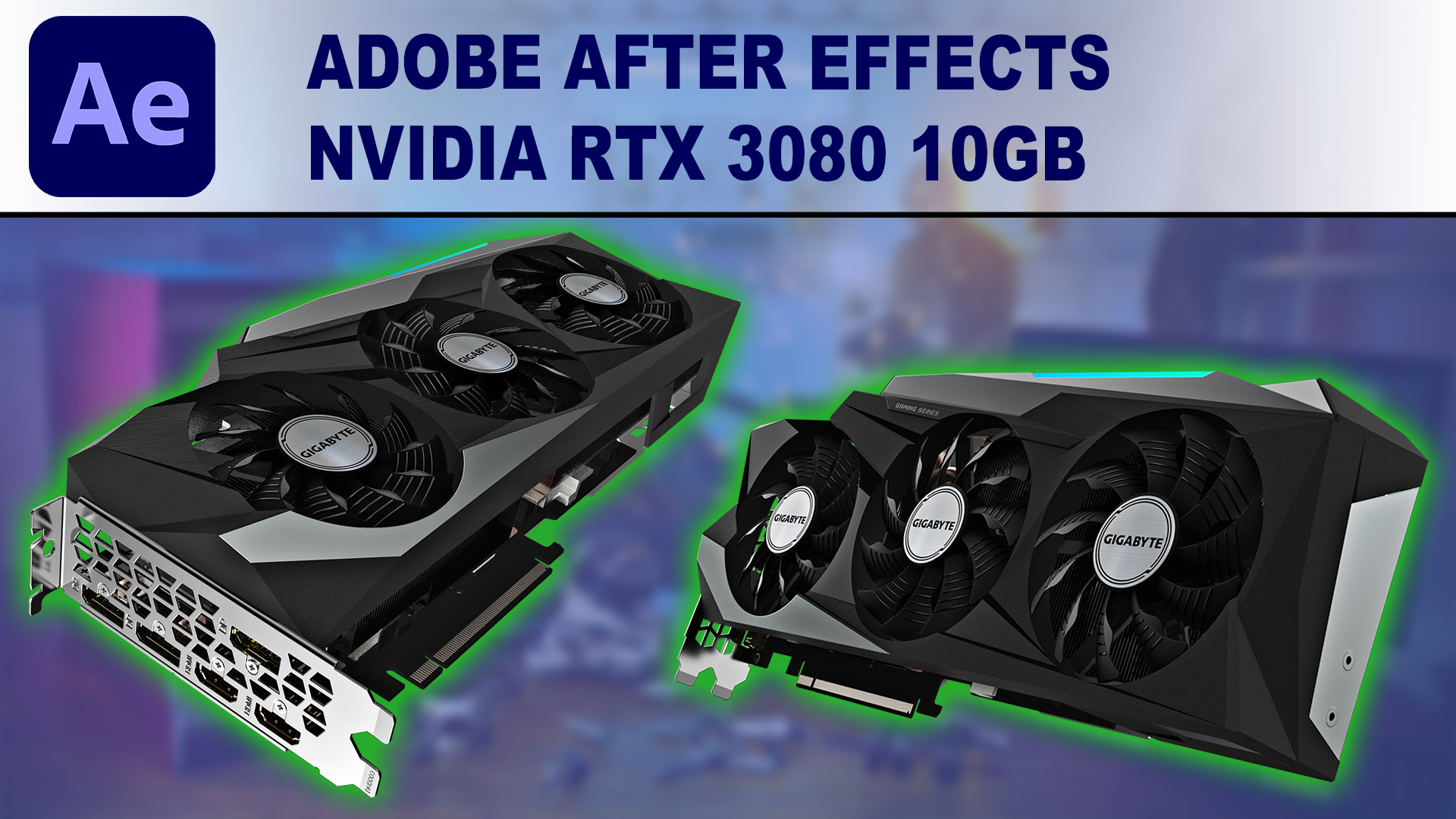 To test each GPU, we will be using the fastest platform currently available for After Effects – most notably the AMD Threadripper 3960X. Since After Effects utilizes the CPU so heavily, this should minimize the impact of the processor and allow each GPU to perform at their fullest potential. 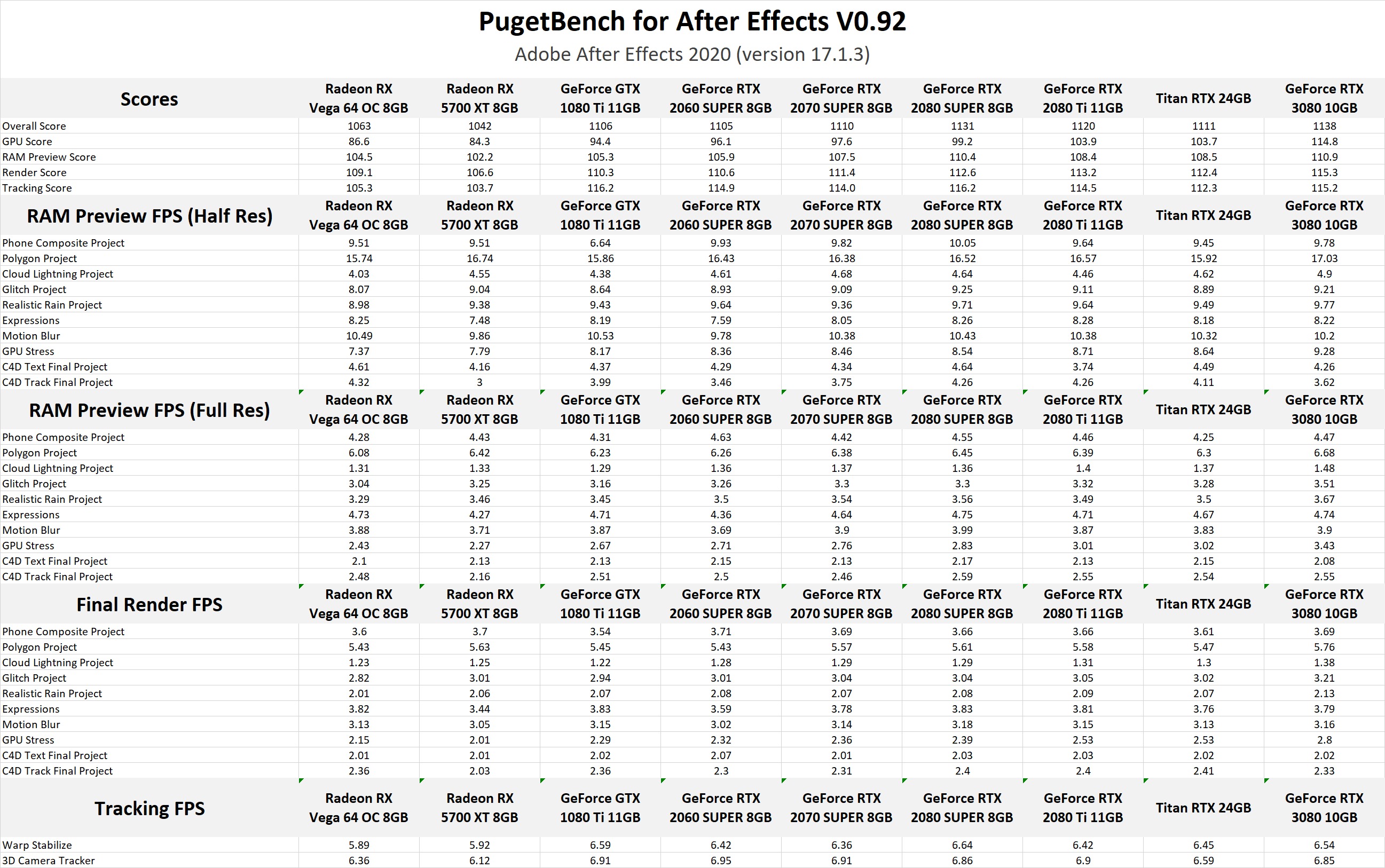 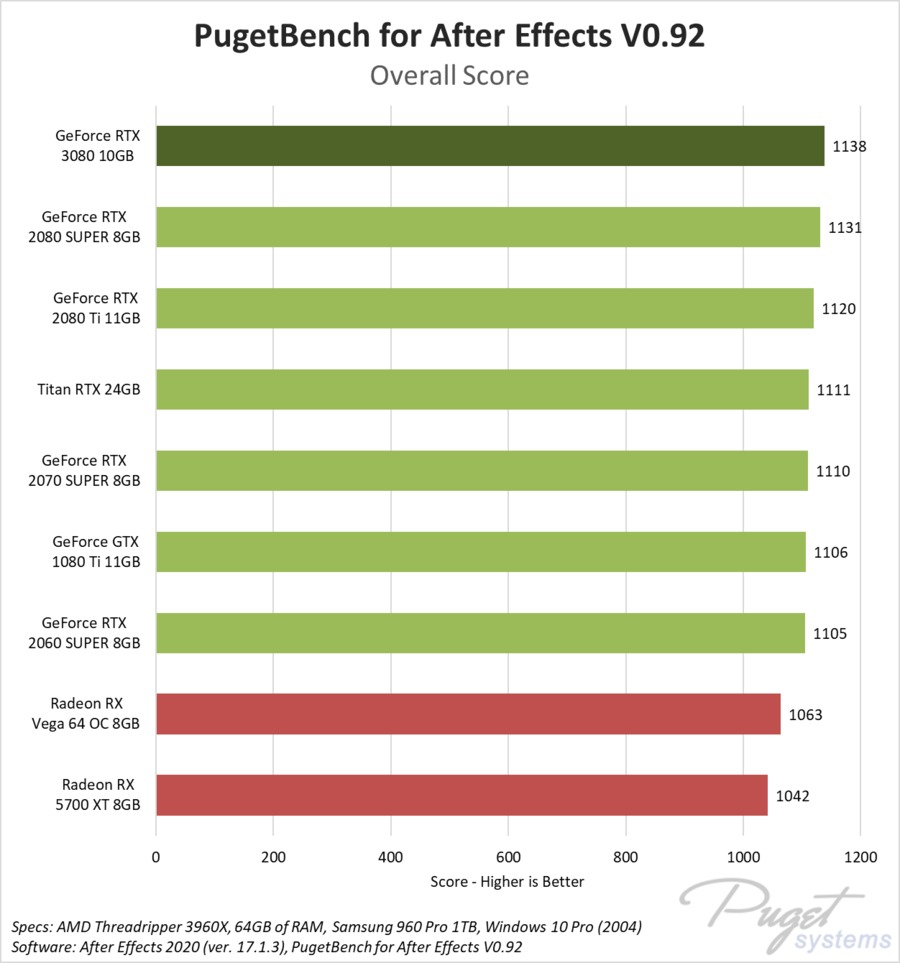 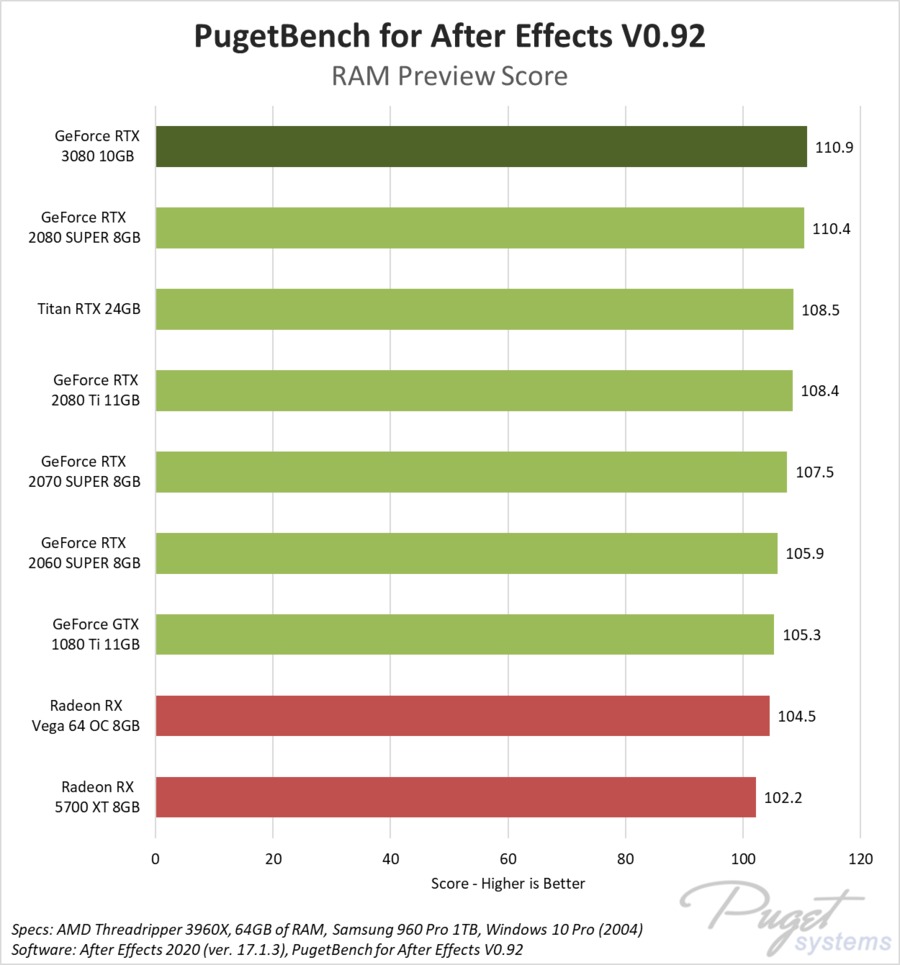 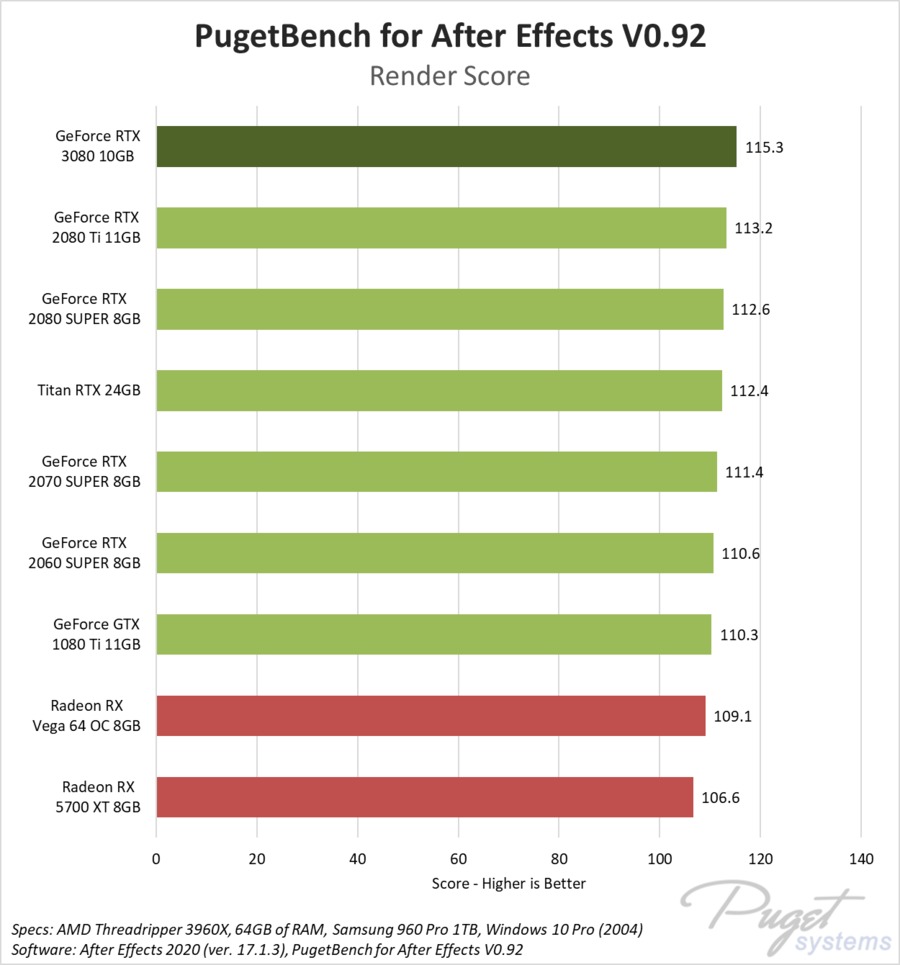 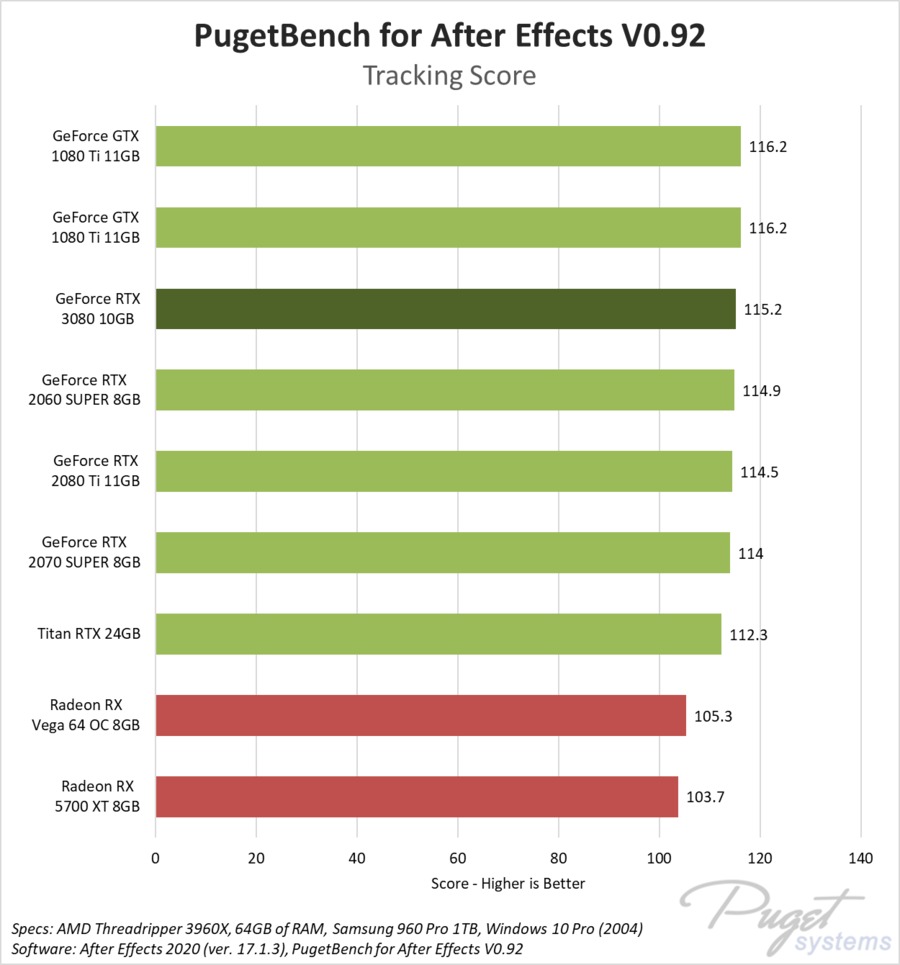 Looking at the overall performance, the new GeForce RTX 3080 does technically top our charts, but the difference between it and the other NVIDIA cards is so slight that it won't be noticeable in most situations. In fact, the difference between the RTX 3080 and the modest RTX 2060 SUPER is only 3%, which is within the margin of error for this type of real-world testing.

Even if we dive into the RAM Preview and Rendering results (ignoring Tracking as that purely uses the CPU), there isn't much of a difference between each NVIDIA GPU. There is definitely an advantage to using NVIDIA over AMD, but beyond that, there doesn't appear to be a significant benefit to using a higher-end GPU.

However, if we examine our "GPU Stress" project by itself (which pushes the GPU as much as is realistic in After Effects), we can get a look at the maximum possible performance gain you may encounter with the RTX 3080. 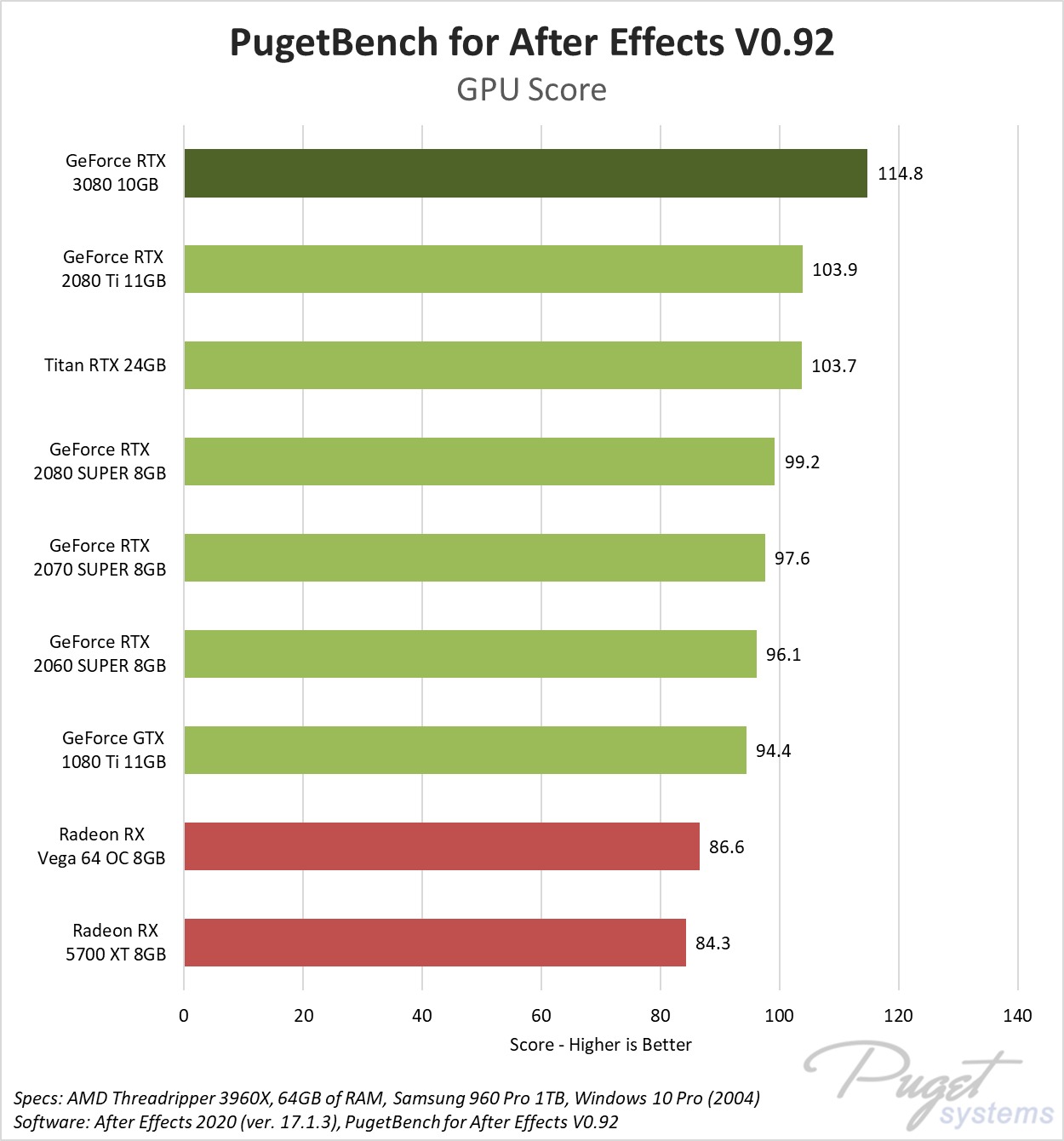 How well does the NVIDIA GeForce RTX 3080 perform in After Effects?

If you already have an RTX video card, the RTX 3080 may not be worth a straight upgrade given how CPU bound After Effects is. But for a new workstation (or those that are still using an NVIDIA GTX 10 series or older GPU), it's very reasonable MSRP of $699 makes it an attractive option.

However, another factor you may want to keep in mind is how the RTX 3080 performs in rendering engines (we currently have articles up for OctaneRender, V-Ray, and RedShift). Even if you do not use these rendering engines today, After Effects has been indicating a trend towards using them more heavily in the future (especially since RedShift was acquired by Maxon), so it is likely that you will be using one of them in the near future if you do any 3D work. You may not get excited about the performance gains we saw in After Effects, but the performance of the new RTX 30 series cards in these rendering engines is absolutely fantastic.

As always, keep in mind that these results are strictly for After Effects. If you have performance concerns for other applications in your workflow, we highly recommend checking out our Hardware Articles (you can filter by "Video Card") for the latest information on how a range of applications perform with the new RTX 3080 GPU, as well as with different CPUs and other hardware.