The last few months have been hectic in terms of new hardware. First, AMD launched their Ryzen 7000 Series of processors along with the new AM5 chipset in late September. Then, in early October, Intel launched their Arc A750 and A770 discrete GPUs, followed quickly by NVIDIA starting their rolling launch of the GeForce RTX 40 Series GPUs on October 12th, starting with the GeForce RTX 4090 24GB.

And now, Intel is launching their new 13th Gen Intel Core processors – code-named “Raptor Lake”. Unlike AMD’s Ryzen 7000 Series, the Intel 13th Gen processors should be able to be dropped into any motherboard that supports the previous 12th Gen CPUs, and maintain support for both DDR4 and DDR5 memory. We did get a bump in terms of what RAM speed is officially supported, but from a platform view, the 13th Gen is pretty much a drop-in upgrade from 12th Gen. 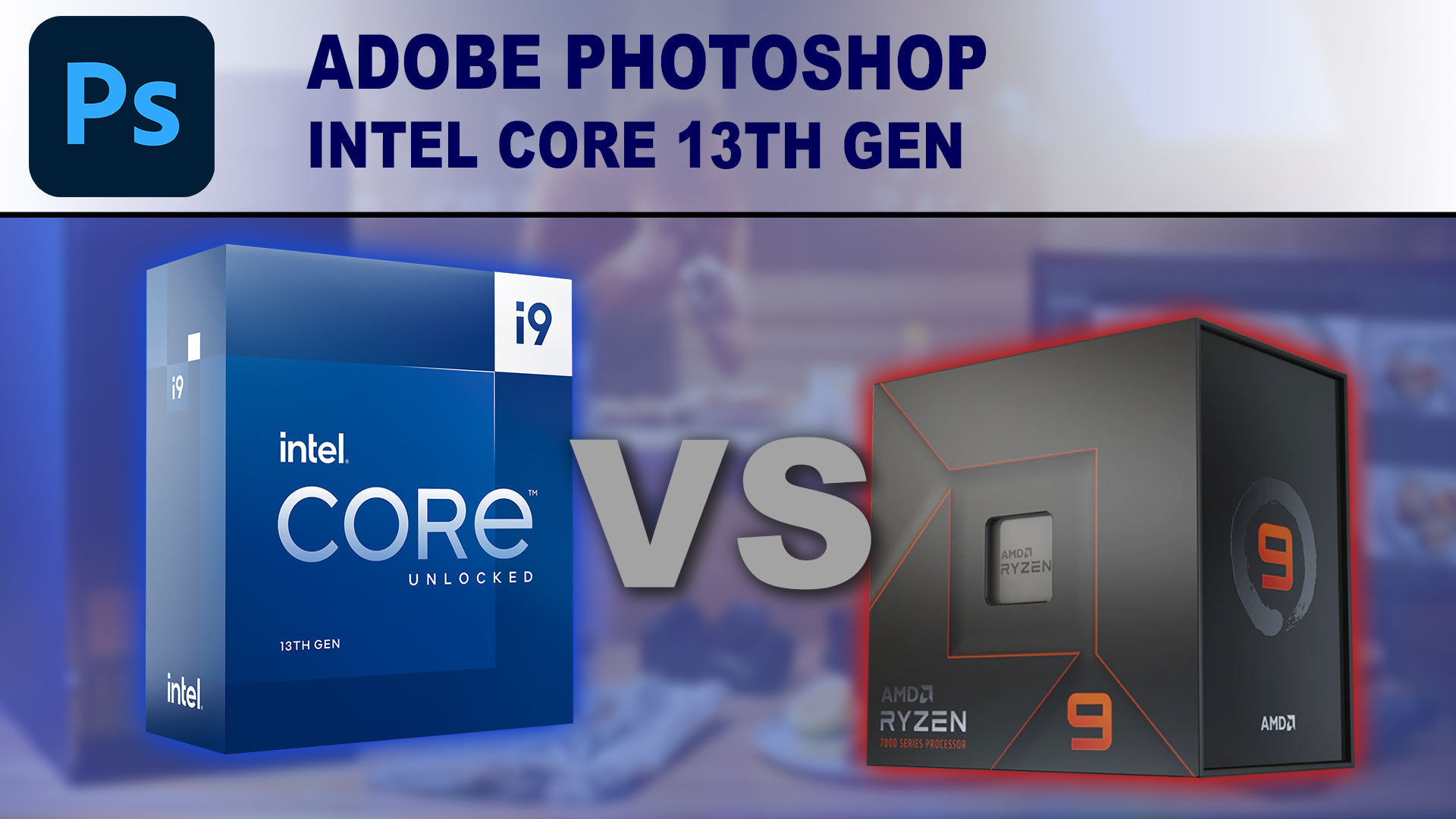 In this article, we will be using our PugetBench for Photoshop 0.93.3 benchmark paired with Photoshop 23.5 to examine the performance of the new Intel Core 13th Gen CPUs. As a comparison, we will be including the previous generation 12th Gen processors, as well as their primary competition – the AMD Ryzen 7000 Series. In addition, while we won’t be calling out the results specifically in this article, the raw results table in the next section also includes the AMD Ryzen 5000 Series since Ryzen 7000 was only recently released.

If you want to read more about the new Intel Core 13th Gen, and what sets them apart from the previous generation, we recommend checking out our main Intel Core 13th Gen Processors Content Creation Review article. That post includes more detailed information on the CPU specifications, testing results for a range of other applications including Lightroom Classic, Premiere Pro, After Effects, and Unreal Engine; as well as all the test setup details for both the hardware and software used in our testing. To start off our analysis, we wanted to look at how the new 13th Gen Intel Core CPUs compared to AMD’s Ryzen 7000 series. The MSRP pricing for Intel and AMD don’t exactly match, but in most cases, the comparisons we are making in the chart above are looking at CPUs that have an MSRP within $40 of each other. The exception to this is the Core i9 13900K vs Ryzen 7950X since Intel doesn’t currently have a CPU that is on par with the Ryzen 7950X in terms of MSRP ($699). We didn’t want to leave the 7950X out, so we decided to include the 13900K twice. First versus the 7900X (a price/performance comparison), and second versus the 7950X (a best-of-each-generation comparison)

If you are interested in the exact MSRP for each of these CPUs, we have a full breakdown in our main 13th Gen Intel Core Processors Content Creation Review article.

Photoshop is a fairly lightly threaded application, which means that you don’t typically get a big performance increase as you get into higher and higher core counts. For the AMD Ryzen 7000 CPUs we tested, we saw results ranging just from 1416 to 1732, or a difference of 22%. Intel was even less, with only a 10% difference between the Core i5 13600K and the Core i9 13900K.

Intel is overall faster for Photoshop, but the difference is only 7-11%. In the previous section, we saw that the new 13th Gen Intel Core CPUs are across the board slightly faster than the AMD Ryzen 7000 Series processors in Photoshop. This is great as far as the typical “Intel vs AMD” comparison goes, but we also wanted to look at how much faster the 13th Gen processors are compared to the previous 12th Gen CPUs.

Overall, this really highlights how much faster the 13th Gen processors are for lightly threaded tasks. This is an area that Intel has historically done well, and they are only pushing it even further with these new CPUs.

How well do the Intel Core 13th Gen CPUs perform in Photoshop?

Overall, we are looking at about 10% higher performance with the new 13th Gen Intel Core processors versus their AMD Ryzen 7000 equivalents. This isn’t a massive difference, however, so choosing between AMD and Intel is likely going to come down to how each performs in any other applications you use.

For this, we highly recommend checking out our Intel Core 13th Gen Processors Content Creation Review article which includes results and links to in-depth testing for a range of other applications including Premiere Pro, After Effects, Lightroom Classic, DaVinci Resolve, and Unreal Engine.