Skip to content
Always look at the date when you read an article. Some of the content in this article is most likely out of date, as it was written on January 27, 2021. For newer information, see our more recent articles.

In recent years, Adobe has been adding more and more GPU acceleration to Premiere Pro – including GPU-based hardware decoding and encoding for H.264 and HEVC media – which has made the video card an increasingly important part of a Premiere Pro workstation. The 48GB of VRAM on the RTX A6000 is certainly overkill for even the most intense Premiere Pro workflows, but the raw performance of this card may be beneficial to those who need the best performance, combined with the highest possible reliability. 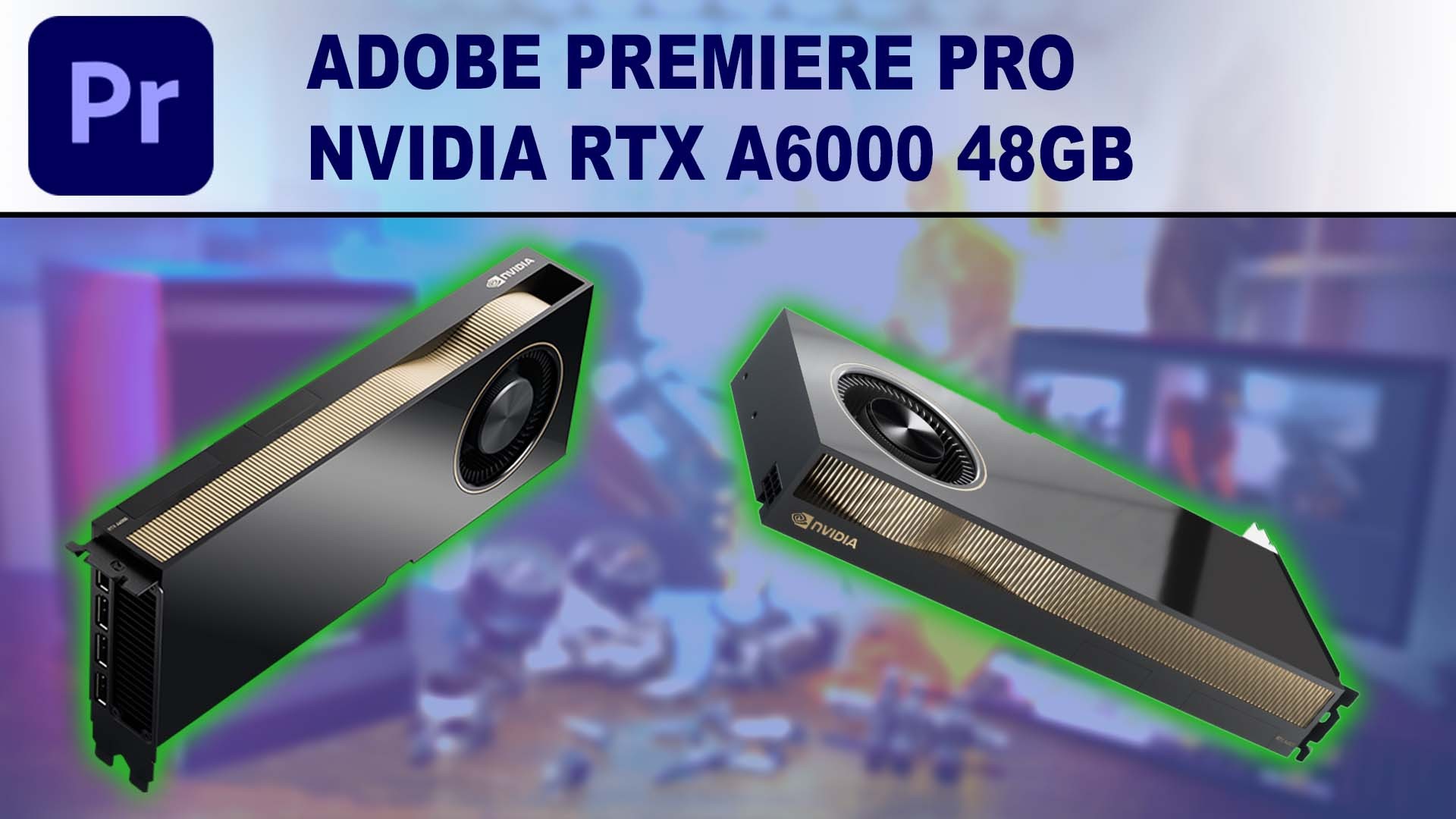 To test each GPU, we will be using the fastest platform currently available for Premiere Pro – most notably the AMD Threadripper 3970X. Since Premiere Pro utilizes the CPU so heavily, this should minimize the impact of the processor and allow each GPU to perform at its fullest potential.

To see how the RTX A6000 performs, we will be comparing it to most of the mid to high-end NVIDIA Quadro GPUs from the previous generation as well as the Quadro P6000 from two generations ago. One thing to note is that we are not going to test the Quadro RTX 8000 since, in terms of performance, it is actually identical to the Quadro RTX 6000. The RTX 8000 does have more VRAM than the RTX 6000 (48GB vs 24GB), but since our Premiere Pro benchmark doesn't need more than 8GB of VRAM, that would not affect the results for our benchmark.

In addition, we are only including two Radeon Pro GPUs: the Radeon Pro WX 9100 and Radeon Pro VII which are currently the top-end workstation GPUs from AMD. NVIDIA tends to hold a commanding lead in applications like Premiere Pro, but including these two cards will let us see if there are any surprises since the last time we tested workstation cards in Premiere Pro.

For the testing itself, we will be using the recently released 0.95 version of our PugetBench for Premiere Pro benchmark. This tests a number of different codecs and includes a dedicated "GPU Stress" test that is meant to put as much load on the GPU as possible while still staying within the realm of what someone might actually do in the real world. If you wish to run our benchmark yourself, you can download the benchmark and compare your results to thousands of user-submitted results in our PugetBench database.

One thing to note is that due to significant changes to what is tested in our benchmark, the scores in this article cannot be directly compared to those found in any of our previous Premiere Pro articles. 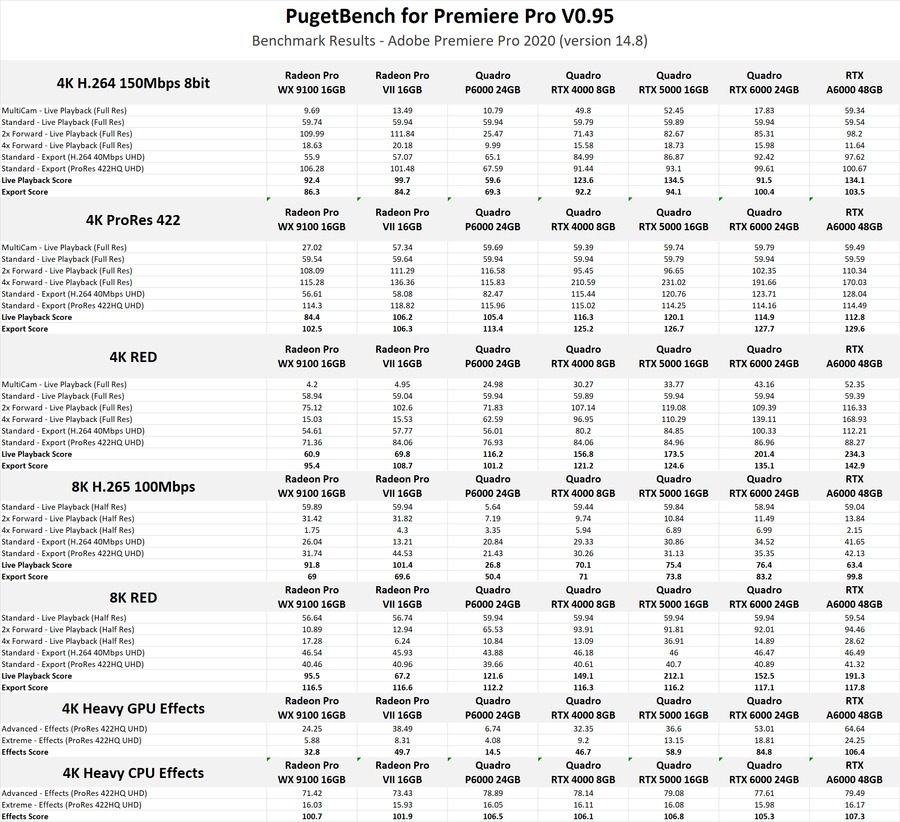 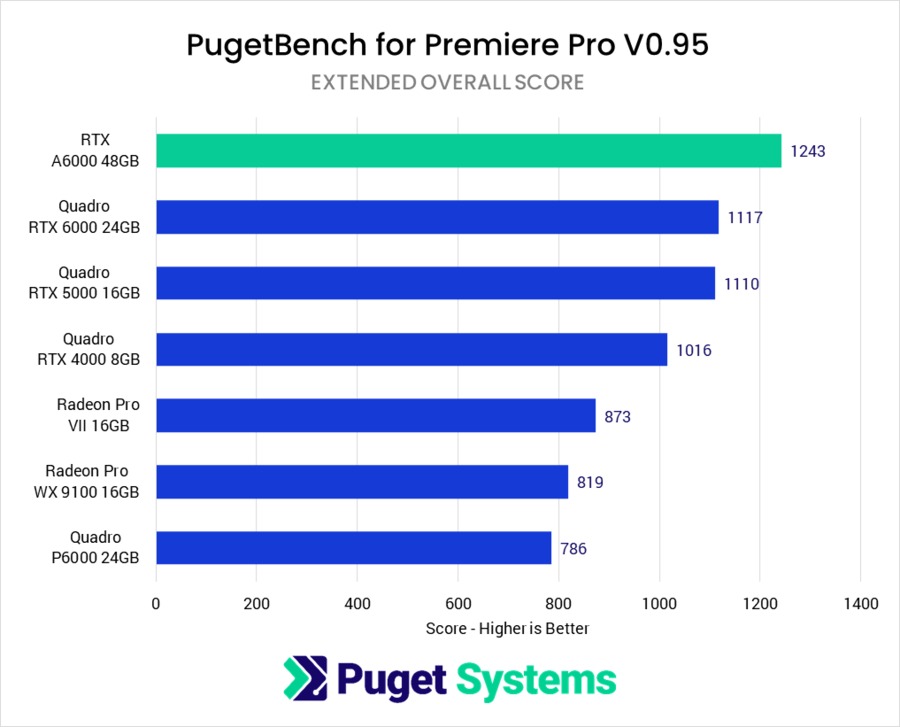 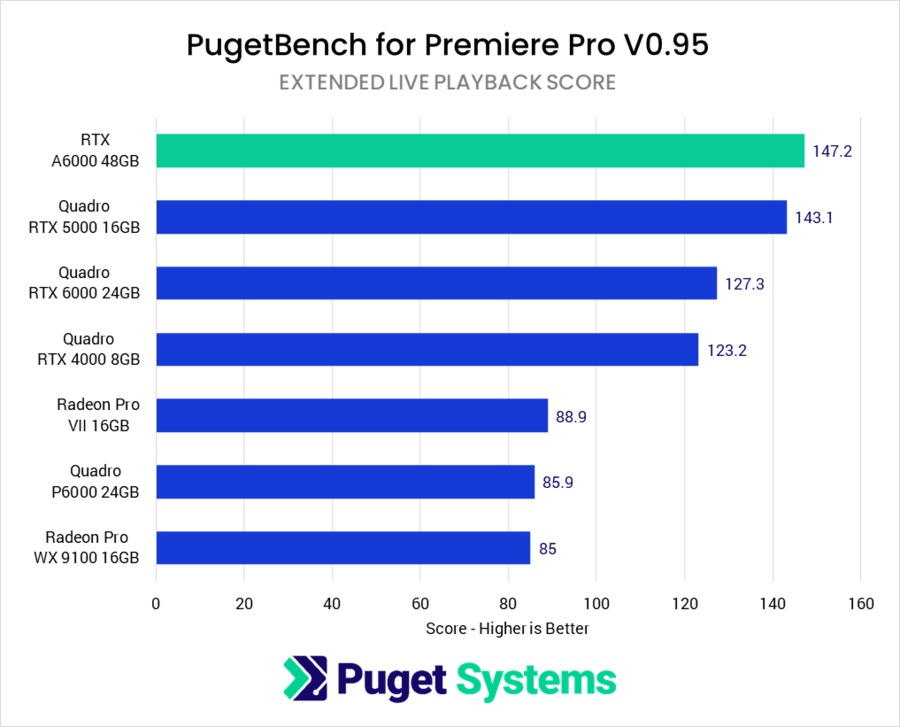 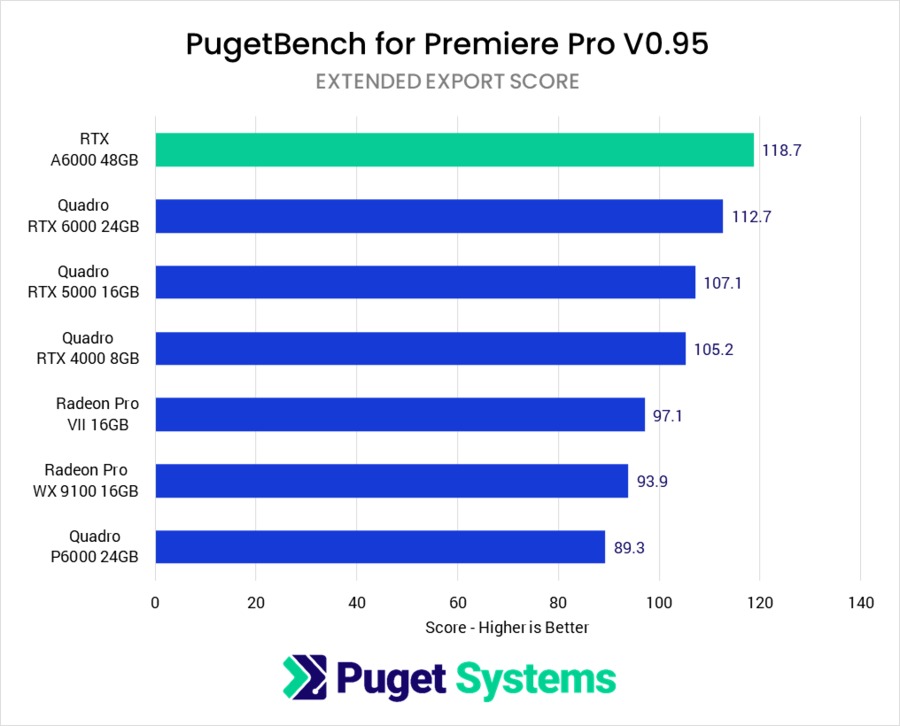 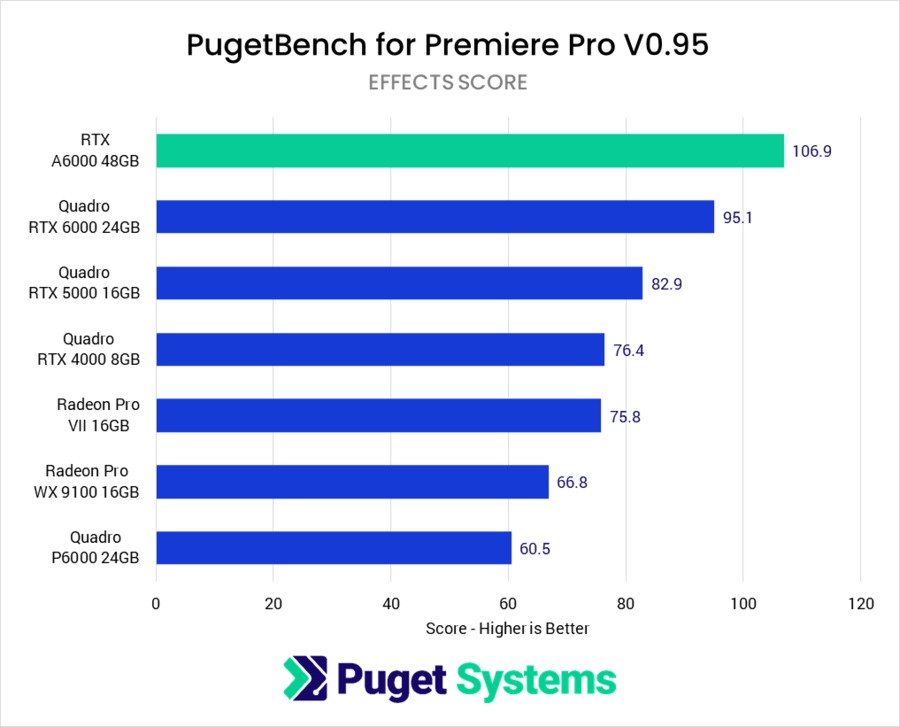 Looking at the Overall Score, the NVIDIA RTX A6000 tops the chart, coming in at 11% faster than the RTX 6000 from the previous generation and a massive 58% faster than the P6000 from two generations ago. Considering that we are looking at the Overall Score which includes a number of tests that are not directly affected by the GPU, that is a very respectable increase in performance.

One interesting thing we wanted to specifically point out is the result for the H.264 multicam test which you can find in the raw results. Here, the RTX A6000 did extremely well and was able to play four streams of high bitrate H.264 media without dropping more than a few frames. That may not seem that unusual since it isn't that much better than the Quadro RTX 4000 and 5000, but note that the Quadro RTX 6000 was only able to hit ~18FPS for that same test which around a third of what the other Quadro cards achieved.

This is not a problem with the test and is actually true to what you would see in the real world for this kind of project. The issue with the RTX 6000, in particular, is that it – and the RTX 8000 – only has a single NVDEC (NVIDIA decoder). You can view NVIDIA's encode/decode support matrix to see for yourself, but the lower-end Quadro GPUs like the RTX 4000 and 5000 have two NVDEC which make them more suitable when decoding multiple streams of H.264 and HEVC media. Luckily, it appears that the RTX A6000 also supports multiple NVDEC, fixing the odd situation where lower-end Quadro cards could be significantly better in situations like this.

While looking at the Overall Score is great to get a sense of general performance, keep in mind that the scores shown in the charts above include quite a few tests that are heavily CPU limited. Playing or exporting ProRes footage does not utilize the GPU, and neither does our dedicated CPU Effects test. This is still a fairly good indication of what the average Premiere Pro user may experience overall, but we can dive into specific situations where a more powerful GPU should net you more significant performance gains. 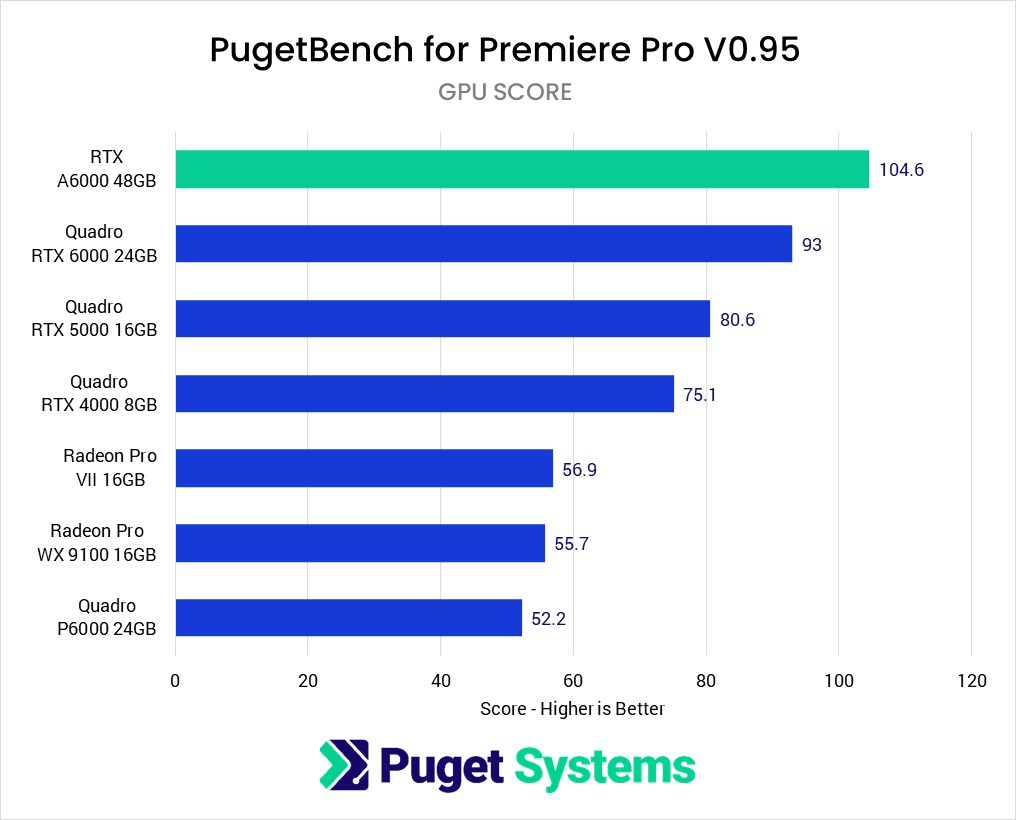 For this test, the RTX A6000 again tops the chart, but this time by a larger margin. It ended up scoring about 13% faster than the RTX 6000 or just over 2x higher than the Quadro P6000 from two generations ago. That performance gain over the RTX 6000 (which is the same performance as the RTX 8000 48GB) isn't huge, but if you have an older card and need 48GB of VRAM, the A6000 can give you a very significant boost to performance.

We again want to point out that workstation cards like the RTX A6000 are not solely about performance, but for those that want to know how it performs relative to the NVIDIA GeForce line, you can compare it to the results in our PugetBench database. In terms of just straight-up performance, the GPU score of ~105 for the RTX A6000 48GB puts it about in line with a GeForce RTX 3080 10GB (only with four times the VRAM, higher reliability, and all the other workstation-only features).

How well does the NVIDIA RTX A6000 48GB perform in Premiere Pro?

The 48GB of VRAM is likely significantly more than most users will need for Premiere Pro, but in terms of performance, the A6000 does extremely well – especially for a workstation GPU where performance is typically secondary to reliability. The great performance also makes us very curious to see how future, more modestly priced, workstation cards (presumably an A5000 and A4000) will perform. But if you are looking for a highly reliable workstation GPU with tons of VRAM and the best performance, the RTX A6000 48GB is certainly it.

As always, keep in mind that these results are strictly for Premiere Pro. If you have performance concerns for other applications in your workflow, we highly recommend checking out our Hardware Articles (you can filter by "Video Card") for the latest information on how a range of applications perform with the new GPUs from AMD and NVIDIA, as well as with different CPUs and other hardware.