Written on December 11, 2020 by William George
Share:
Table of Contents

In fact, dual RTX 3070s outperformed a single RTX 3090 that costs substantially more. A pair of RTX 3080 or 3090 cards are even faster, but with only a small increase in performance they may not be worth the extra money for most users.

Agisoft Metashape has had an interesting history with multi-GPU performance. Back when it was called Photoscan, benchmarks we ran showed that two and even three video cards could bring substantial processing speed increases. Our last round of testing, however, showed very little benefit to having a second GPU. With a newer version of Metashape out now, and with enough of the latest NVIDIA GeForce RTX 30 Series video cards available to test dual card configurations, we are taking a look at this topic once again. 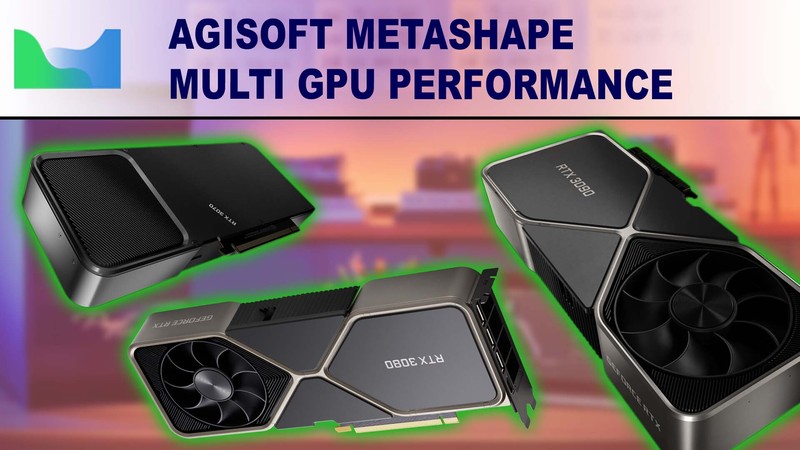 We used AMD's Ryzen 9 5950X because we have found it to be one of the fastest processors for Metashape (along with the other Ryzen 5000 Series chips). However, that does mean that we are practically limited to two GPUs. Some boards for this processor might be able to cram more cards in, but given the PCI-Express layout supported by this family of CPUs it wouldn't really be ideal to go beyond two... and stepping up to a bigger platform like Threadripper in order to support more video cards would make running multiple instances of Metashape a better approach to maximizing performance.

Here are charts showing the performance of single GeForce RTX 30 Series cards (in blue) versus pairs of the same cards (green):

For a detailed look at how adding a second GPU impacted performance in different processing steps, here is a full table of the results: 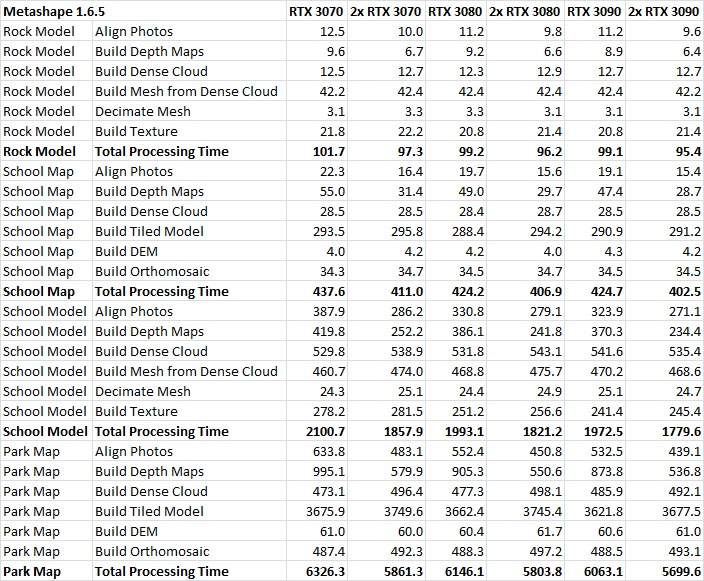 In this version of Metashape, on this particular CPU platform, and with GeForce RTX 30 Series video cards it looks like adding a second GPU provides a measurable boost to overall processing speed. That info alone may be enough for some folks, but digging deeper into the results table shows where the performance increase is coming from: the Align Photos and Build Depth Maps steps. Those are both substantially faster with dual video cards compared to just one, with Align Photos taking ~20% less time and Depth Maps taking 30-40% less. Those are significant numbers!

However, on the flip side, the presence of a second video card appears to slightly slow down some of the later processing steps. The reduction in speed there is smaller, though, and isn't enough to counteract the big gains in those first two areas. Overall, the performance with two video cards ends up being 5-10% faster than a single card... with larger projects, and especially larger models (rather than maps) seeing the most benefit.

What is even more interesting, though, is the comparison between two of the more affordable cards and a single costlier model. The most clear example of this is a pair of GeForce RTX 3070s (MSRP $499 each = $998 for two) versus a single RTX 3090 (MSRP $1499). The pair of less expensive cards was faster in all four of our image sets, and costs ~$500 less! Further, the increase in performance going from that pair of 3070s to a pair of 3090s never exceeded 5%... so while dual 3090s is the fastest configuration we have yet tested, the minor increase in speed will likely not be worth the price for most users.

As always, please keep in mind that these results are strictly for photogrammetry in Agisoft Metashape. If you have performance concerns for other applications in your workflow, we highly recommend checking out our Hardware Articles (you can filter by software or other categories) for the latest information on how a wide range of programs perform with various GPUs, CPUs, and other hardware.

The conclusions of this article are clearly a joke.

Because there *is* a performance improvement, and it offers a better value (price:performance ratio improvement) than simply getting a higher-end single video card.

Lets say you were looking at buying a $4000 workstation with a single RTX 3070 in it - and simply by adding another 3070 you could improve performance ~10%. Sure, you'd have to spend maybe 15% more money to get that boost... but that isn't a bad investment by any means, especially if the time you'd save from that additional speed would pay for itself over the course of a few months :)

And the alternative, if you wanted faster performance, would be a 3080 or 3090 - but both of those would give you less of an improvement for the amount of money you'd spend. Or, if you just want the absolutely fastest (and don't care about the cost) then dual 3090s will be faster... just not cost effective for most users. Which is exactly what I wrote :)

I suppose terms like "good" are relative, and can mean different things to different people. To help clarify, in case someone jumps right to the end without reading through the article, I adjusted the language in the conclusion to specify that "the GeForce RTX 3070, 3080, and 3090 all showed a 5-10% boost from running as a pair versus a single GPU..." - hopefully that helps folks quantify the benefit, and decide for themselves if it is worthwhile to them :)

Hi william,
I have a question:
I would like to know how to configure my pc to sync a pair of rtx GPU 3070s, if SLI is not available and get such results. my motherboard supports 2 GPUs but I can't get both of them to work at the same time.

There isn't any SLI or similar functionality available for RTX 3070s, but if you are working in Metashape then all you should need to do is enable both GPUs within Metashape's preferences. This is from an older version, but the way to get into the preferences is basically the same still: https://www.pugetsystems.co...