Metashape, formerly known as PhotoScan, is a photogrammetry program that takes a set of images and combines them to create a 3D model or map. Processing of those images into point clouds and 3D meshes/textures is time-consuming, heavily using a computer's CPU and GPU. We have updated our benchmark tools, following the recent rebranding of this software, and recently published a CPU comparison article. Next up, we are taking a look at how different AMD and NVIDIA video cards perform in this application.

Here is a list of the hardware we tested Metashape on. We selected the Intel Core i9 9900K for the processor in this system since it topped the results in our recent CPU roundup. The other specs were kept the same across all test runs, to ensure a fair comparison.

We have improved our benchmarking for Metashape compared to previous articles. Now we have four image sets that we own the rights to, covering both smaller and larger size Model and Map projects. The smaller image sets are included in our public Metashape benchmark, which you can download and run if you want to compare your system's performance to what we measured in our testing.

We also split our "model" testing into two branches: one using the building of a dense point cloud to creating the model / mesh, and the other skipping that step and using just the depth maps for mesh creation. These methods utilize the hardware in a computer differently, and we wanted to reflect both approaches in our benchmark. This is also why we ran Metashape 1.5.1 instead of the newer 1.5.2: it was reported to us by a reader than 1.5.2 has some odd behavior with depth maps, and we didn't want that to affect these results.

Each image set was processed 2-3 times on each video card, and the fastest overall result was used for the comparisons below.

Here are charts for each of the six test projects, showing the total time (in seconds) they took to process on each GPU. The video cards are listed in the same order on all charts, regardless of performance, to make it easy to see how they stack up. AMD models are shown in red, with NVIDIA in green, and the fastest result on each project is highlighted (bold) to ensure it stands out from the crowd.

For those who want to dig further into the differences in how each GPU performed, here is a table showing the times for each step within Metashape on each of the image sets: 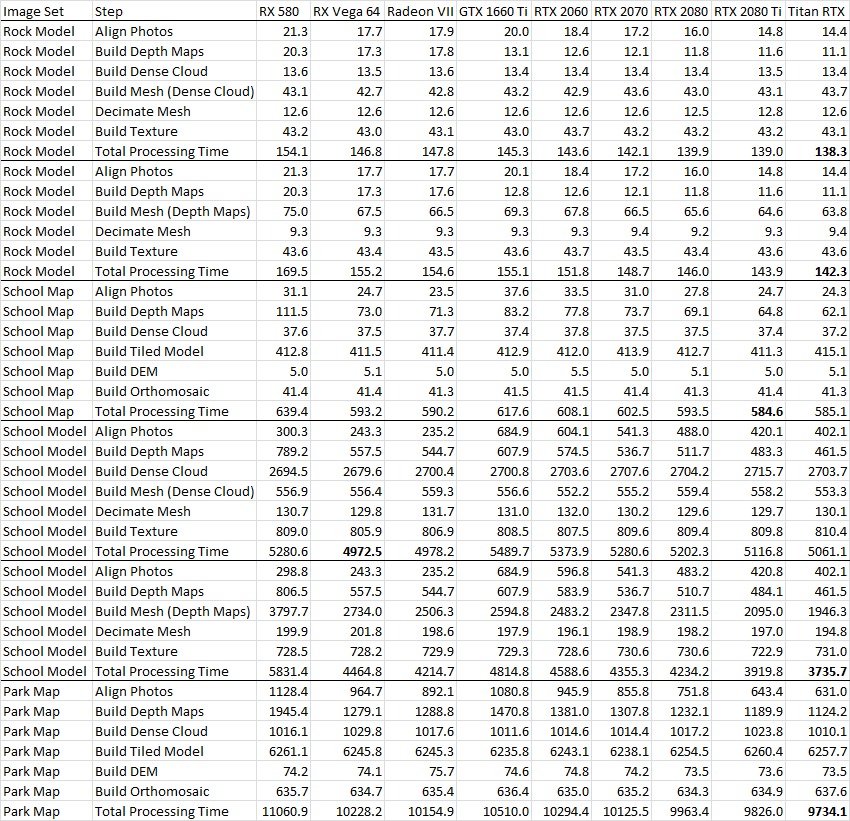 What about using two GPUs instead of one? We did a brief test on that by adding a second RTX 2080 Ti to our test system: 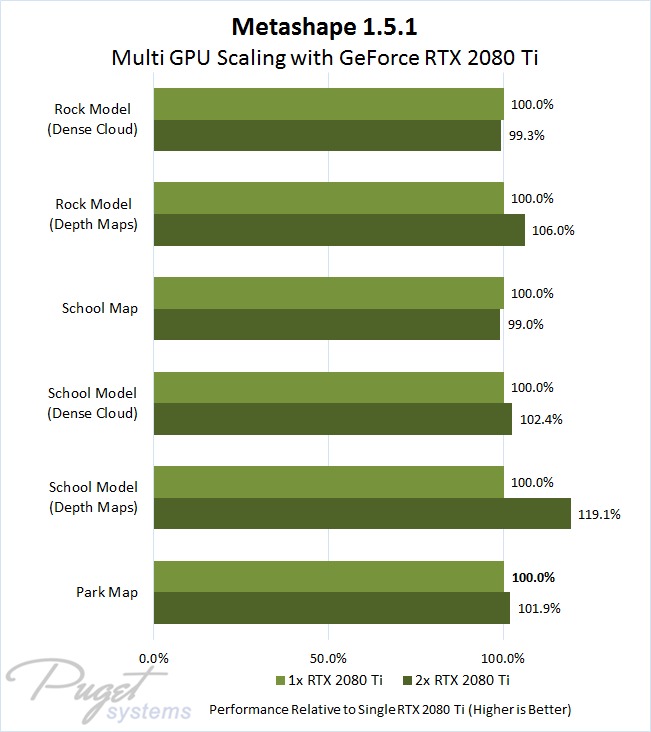 Across most of our testing, there is a clear but small increase in performance as you move to higher-end video cards - both on the AMD and NVIDIA sides of the spectrum. However, it isn't a massive difference. With one exception (the School Model when using Depth Maps to build the mesh) the difference between NVIDIA's top-end Titan RTX and mid-range GTX 1660 Ti was only around 10%, and those cards retail for $2500 versus only ~$300! Unless you need every ounce of speed you can get, the highest-end video cards are overkill.

In some situations, a strong alternative to those individual top-end cards is a pair of less expensive models. Specifically, if you are working with models (rather than maps) and plan to calculate meshes using depth maps then you should see a nice boost (~5-20%) from going with two GPUs. The impact on other types of projects appears to be negligible, though, so it isn't the best option for everyone.

While they did turn in reasonable performance in a couple of tests, there is some additional information worth mentioning about AMD's Radeon GPUs in our Metashape testing. Every test run with NVIDIA cards went perfectly, but we ran into at least one crash with each of the three Radeon cards we tested. Specifically, all three crashed in one of the Park Map runs - during the Build Depth Maps step. Thankfully we looped the test three times, so we had two successful runs for each card from which to gather data for this article, but the fact that we encountered such crashes at all - and especially that they happened on all three of the AMD Radeon cards - is a red flag.

The Radeon RX Vega 64 also had one other problem, where during a test run (I cannot remember on which project) it kept processing for over 13 hours. I eventually had to terminate the test manually, and I did notice an OpenCL error when skimming through the Metashape log afterward. That sort of error only happened the one time, but it delayed getting this article published by a full day.

Encountering such delays in a real work environment would be bad, so we cannot recommend AMD cards for Metashape at this time.

For the most part, simply selecting the NVIDIA GeForce card which best matches your budget is the way to go for Metashape.

If you know that your work will heavily involve calculating meshes based on depth maths, then consider dual GPUs as a way to boost performance - but keep in mind that not all projects will see a big benefit from going that way. And for now, avoid AMD Radeon cards. 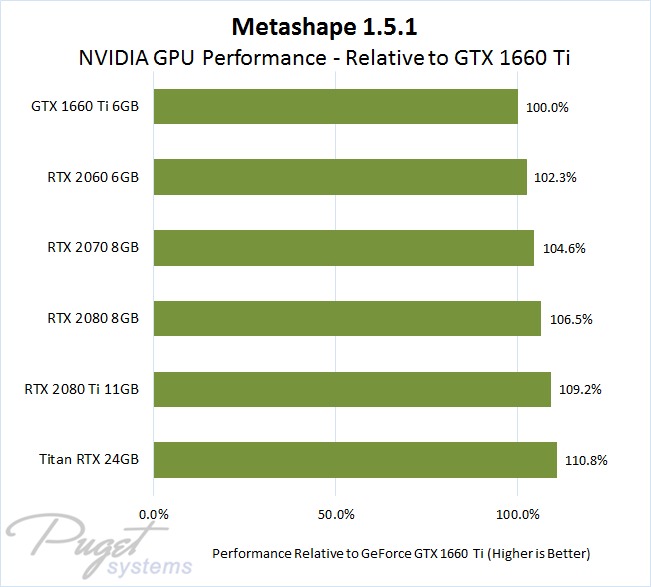 In case you missed it, you can check out our recent CPU performance article. We also make our smaller image sets publicly available to test via our Metashape benchmark, so that you can compare your own system's performance to what we have measured in our articles.