Skip to content
Always look at the date when you read an article. Some of the content in this article is most likely out of date, as it was written on July 25, 2018. For newer information, see our more recent articles.

PhotoScan makes use of the video card in a computer to assist with the computation of certain steps. The primary GPU accelerated steps are aligning photos and building a dense point cloud (a 3D representation of physical points that are seen from multiple angles in different photos). Because the video card plays a big role in these calculations, the model of video card (or GPU) used can have an impact on the amount of time those steps take. In this article, we are taking a look at AMD's Radeon line of video cards – including the Vega 56 & 64 – to see how they compare to NVIDIA's GeForce 1000-series.

Even though these processing steps in PhotoScan are GPU accelerated, the CPU still plays a role in performance as well. To ensure that the different GPUs are the focus of this particular test we selected a processor and platform that is among the fastest available for this application: the Intel Core i9 7900X, a 10-core processor which combines quite a few cores with a reasonably high clock speed (thanks to turbo boost). Both that CPU and the various GPUs we tested were attached to a Gigabyte X299 Designare EX motherboard.

All tests were conducted with "High" quality settings. The only results we are interested in for this comparison are the Align Photos and Build Dense Point Cloud times. Those steps use the GPU, while the other processing steps (like Build Mesh and Build Texture) are entirely CPU driven. We did go ahead and test those as well, just to make sure, and the results across both AMD and NVIDIA cards were within a 2% spread – safely within the margin of error.

It is worth pointing out that two of the AMD cards we are testing, the Vega 56 and Vega 64 models, are overclocked variants manufactured by Gigabyte. Normally we try to avoid cards that are factory overclocked since it makes for a bit of an unfair comparison to stock-speed models, but in this case, we couldn't find the reference-style cards we prefer to use. As such, the performance of those two AMD GPUs in our results will probably be a little higher than you would get with non-OC parts. Moreover, the cooling necessary for that overclocking means these cards have dual fans and take up three PCI-E slots (rather than the usual two) – so they would not work well in multi-GPU configurations, and as such we are looking only at single-card performance in this article. 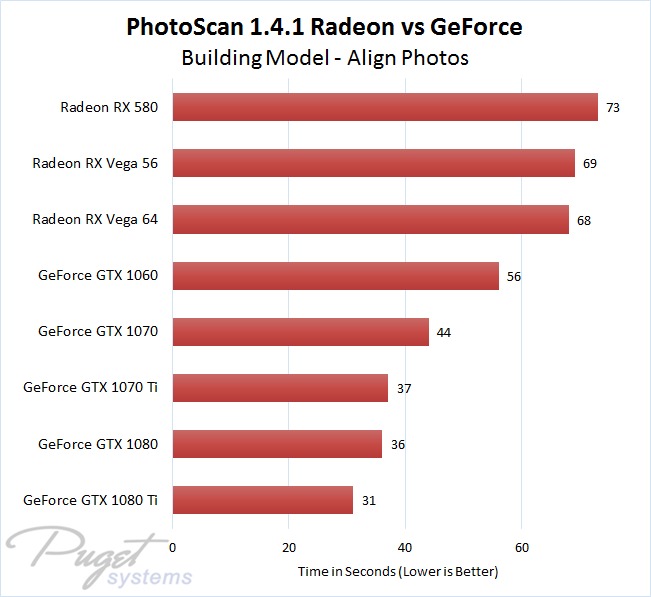 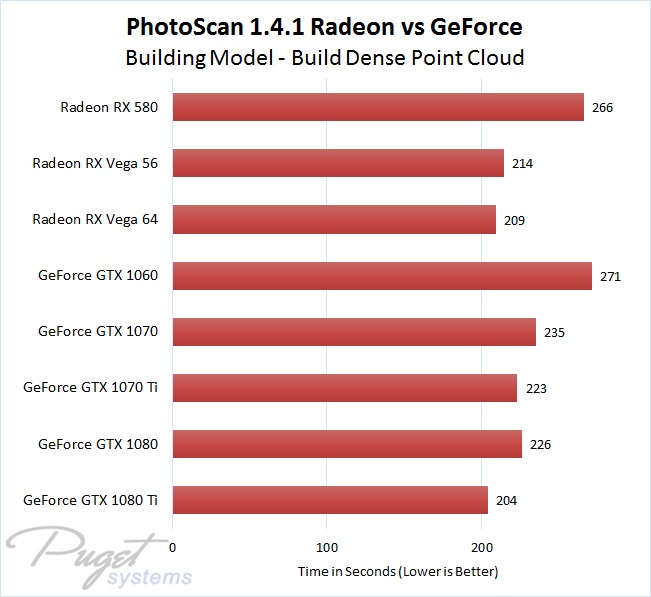 Moving on to the Monument Model image set, here are results for the Align Photos step: 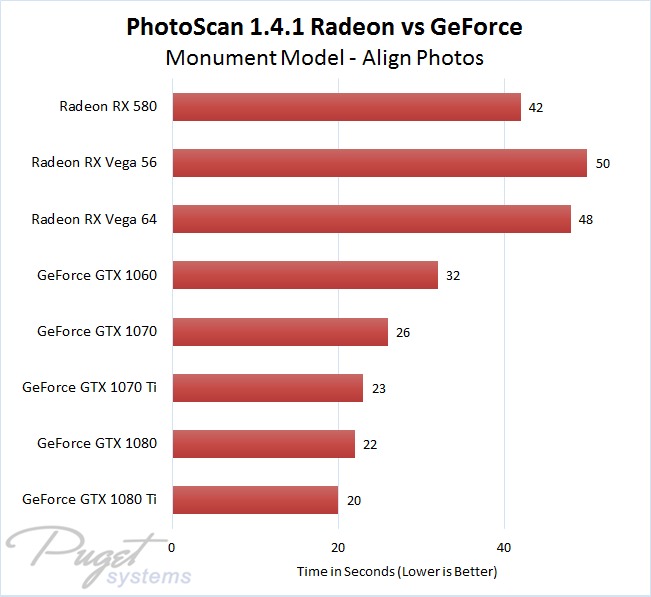 And lastly, here are results for the Build Dense Cloud step with the Monument Model image set:

In the graphs above it is clear that the AMD Radeon cards are slower in the Align Photos step, but make up for much of that time with good performance during Build Dense Point Cloud. It is hard to see with the data spread across four graphs, though, so here is a total of all four (both parts of the workflow, on both image sets): 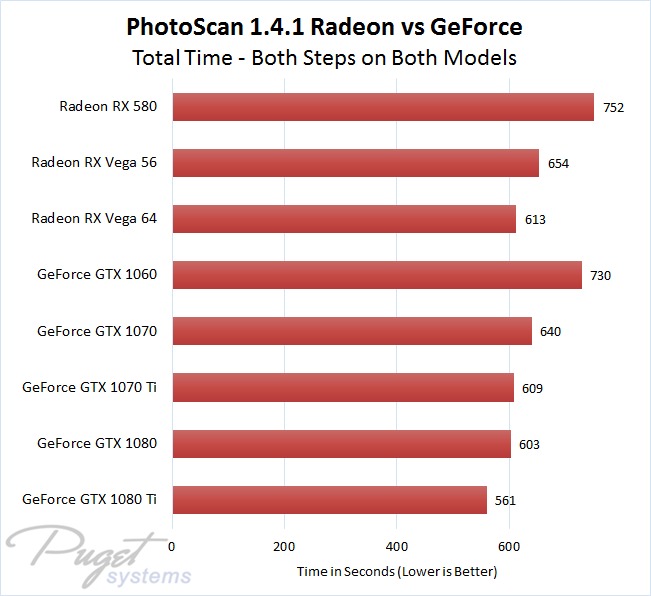 Now we can see clear performance bands that these cards fit into:

The GTX 1080 Ti is well in the lead, with no tested Radeon cards approaching it – then again, it costs more than any of the other models in this roundup. Speaking of prices, GPUs fluctuate quite a bit these days… but it is still worth looking at how much performance will cost. Here are the lowest prices from Newegg.com for each of these GPU models, across different brands and variants, as of 7/24/18:

*All prices rounded up to the nearest dollar, with used and refurbished cards excluded

The price-to-performance ratio winner looks to be the GeForce GTX 1070 Ti, with faster overall speeds than any of the AMD cards we tested while having a lower price tag than either of the Vega models. Keep in mind that those Vega cards we used were also overclocked by their manufacturer (Gigabyte) – so if anything, stock-speed Radeon cards (if available) might be slower yet.

One thing to keep in mind with the results shown above is that we did our tests at "High" quality. There is an option above that for building the dense cloud, "Ultra High", which will take substantially longer. Given the Radeon cards' strong showing in that portion of the test, it is possible they would pull ahead of some of the GeForce models. The GTX 1080 Ti, though, is still the fastest from among the cards we tested – and if you are spending hours per image set on Ultra High quality, it is probably well worth spending extra for that GPU.

AMD's Radeon cards performed fairly well in PhotoScan, but the price:performance champion for this application looks to be the GeForce GTX 1070 Ti. If you want the fastest overall performance, spending a little more for the GTX 1080 Ti will net you about an 8% increase in performance. Multiple GPUs in a single system are also an option, so check out our article on that topic if interested.