Skip to content
Always look at the date when you read an article. Some of the content in this article is most likely out of date, as it was written on May 28, 2019. For newer information, see our more recent articles.

Metashape, formerly known as PhotoScan, is a photogrammetry program that takes a set of images and combines them to create a 3D model or map. Processing of those images into point clouds and 3D meshes/textures is time-consuming, heavily using a computer's CPU and GPU. We have updated our benchmark tools, following the recent rebranding of this software, so in our first article focusing on the new Metashape we will take a look at how Intel's Core i7 and i9 processors stack up against AMD's Threadripper chips.

Here is a list of the hardware we tested Metashape on. The video card and RAM capacity were kept the same across all platforms, to avoid either of those throwing off the comparison. All results included here are from after the recent Windows 10 security patch addressing MDS vulnerabilities in some Intel processors, but we did see a small increase in Core i7 9700K and i9 9900K performance when we moved to the newer Z390 motherboard – which helped offset some of the performance those chips lost because of the update.

We have improved our benchmarking for Metashape compared to previous articles. Now we have four image sets that we own the rights to, covering both smaller and larger size Model and Map projects. The smaller image sets are included in our public Metashape benchmark, which you can download and run if you want to compare your system's performance to what we measured in our testing.

We also split our "model" testing into two branches: one using the creation of a dense point cloud to create the model / mesh, and the other skipping that step and using just the depth maps for mesh creation. These methods utilize the hardware in a computer differently, and we wanted to reflect both approaches in our benchmark. This is also why we ran Metashape 1.5.1 instead of the newer 1.5.2: it was reported to us by a reader than 1.5.2 has some odd behavior with depth maps, and we didn't want that to affect these results. 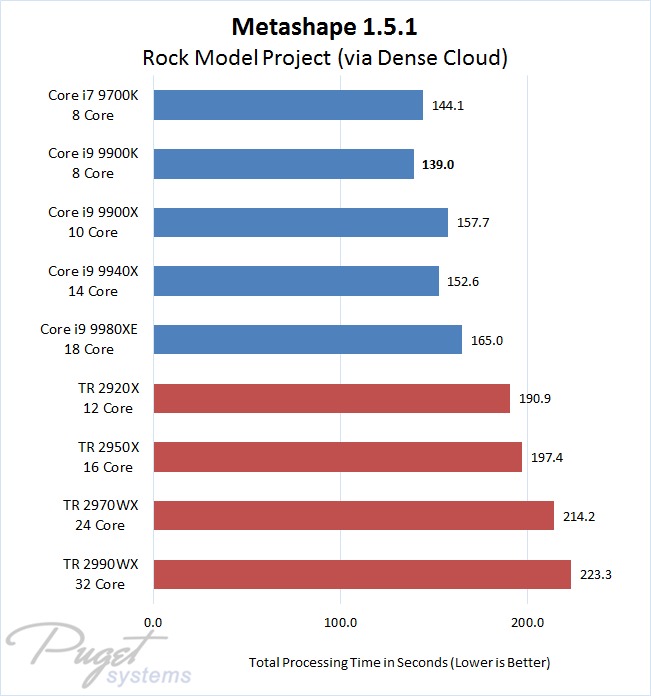 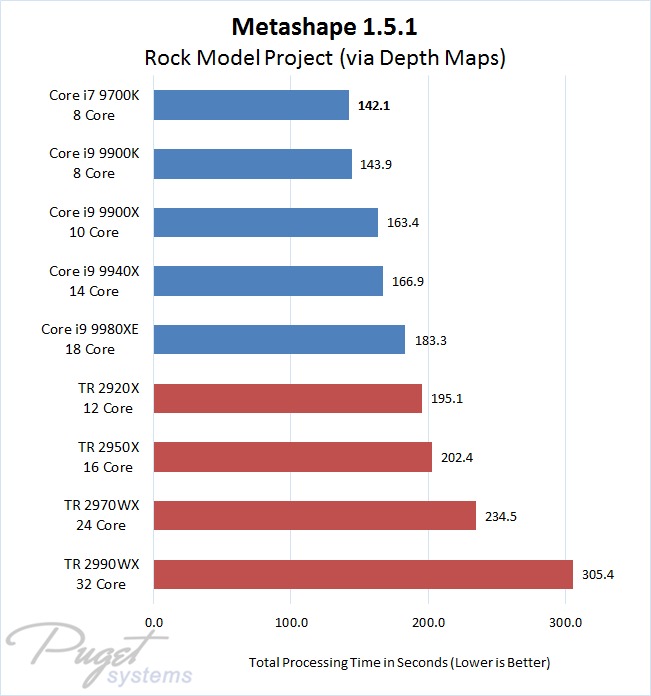 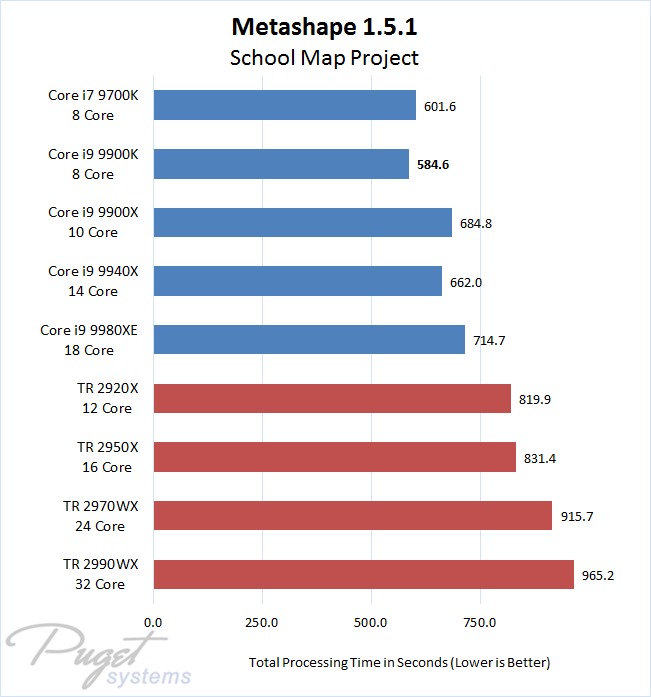 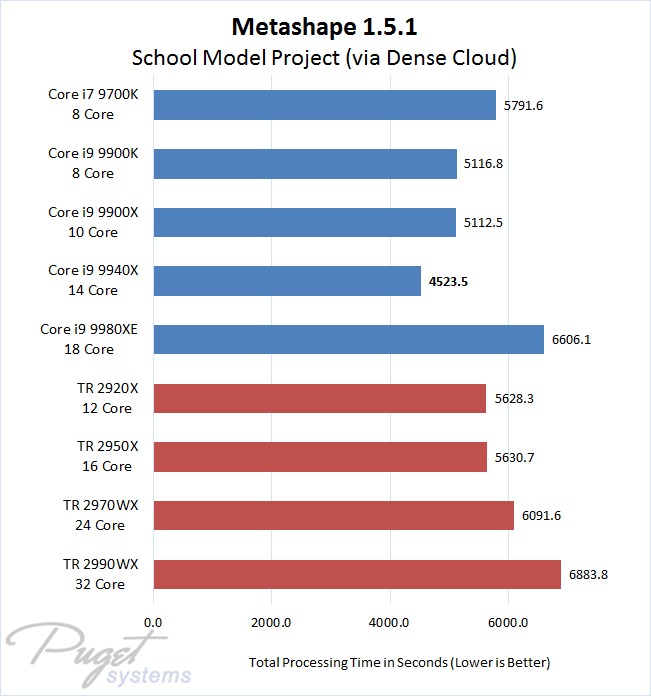 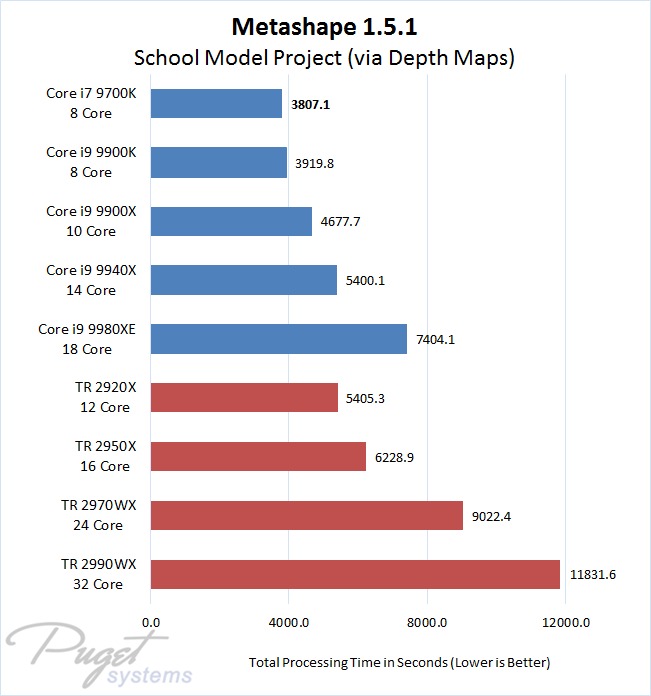 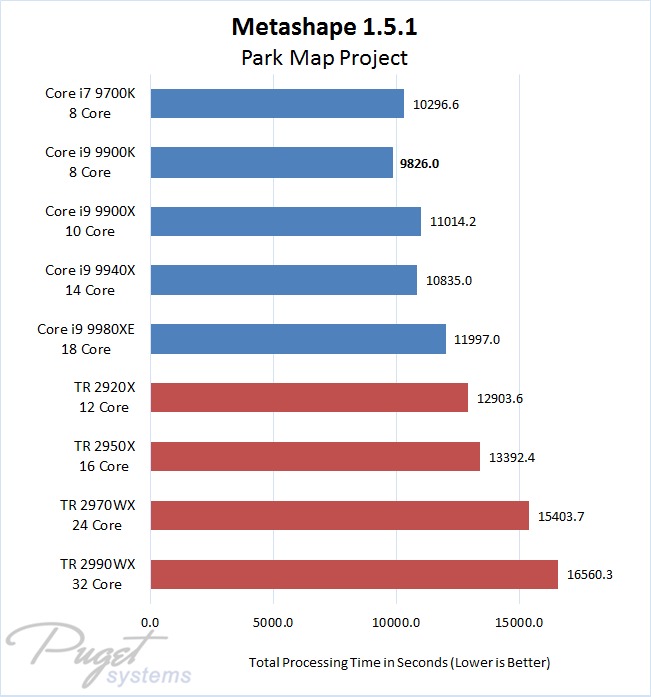 For those who want to dig further into the differences in how each CPU performs, here is a table showing the times for each step within Metashape on each of the image sets: 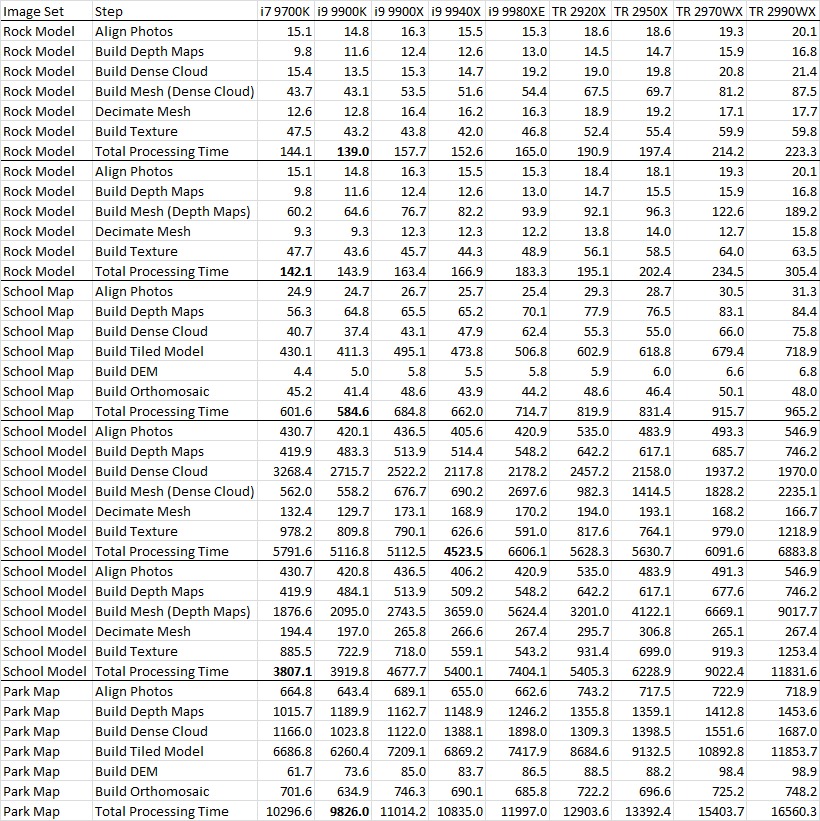 Across most of our testing, Intel's Core i7 9700K and i9 9900K traded off coming in first and second in performance. This seems to indicate that, in general, clock speed matters more for Metashape than core count – and that Hyperthreading, the biggest feature difference between these two processors, doesn't play much of a role either.

However, there is one odd outlier – the larger of the two models (not maps) when using the Dense Cloud method of mesh creation. There was some very strange behavior in that part of the benchmark:

I can't explain the 9980XE's slowness at building the mesh, but even if that hadn't happened I think the 9940X would still have been the fastest in this situation. It has a good combination of clock speed and core count, so with the core count suddenly benefiting performance in the most time-consuming step it came out on top by a wide margin. Remember, though, that this was a lone outlier among our results.

For most projects in Metashape 1.5.1, either Intel's Core i7 9700K or i9 9900K will give you the best performance – at least when using a single video card (we'll be testing multiple GPU configurations in the near future to see if that changes anything). The one possible exception is processing larger models using a dense point cloud, rather than just depth maps, where a processor with more cores while still maintaining very high clock speeds can take the lead. Such processor can often support higher amounts of memory as well, which may be a factor if you work with particularly large projects or use very high quality settings.

Stay tuned for more coverage of Metashape, including video card performance comparisons and a look at multi-GPU scaling.