When the performance of AMD's Threadripper processors is brought up, the discussion can often turn toward some of the oddities of this CPU's architecture and how it interacts with thread scheduling in Windows 10. That is something which AMD has attempted to improve with their Ryzen Master software, and which has been partially addressed by Microsoft as well (via Windows updates). Some folks in the wider AMD enthusiast community have tried to tackle this issue too.

While testing various photogrammetry programs recently this topic came up again in the comments on our articles, and it was suggested that Windows 10's 1903 update might improve Threadripper performance. CorePrio was also brought up as a potential boost for this processor family. Since we already had a testbed system set up, I decided to take a look at how the latest major version of Windows 10 impacted performance of the top-end Threadripper 2990WX, as well as whether CorePrio provided any improvement.

Here is a list of the hardware we tested RealityCapture on. The CPU, RAM capacity, and video card were kept the same across all test runs, to avoid any of those throwing off the comparison. The only thing that changed was the version of Windows 10 – from 1809 to 1903 – and the addition / enabling of the CorePrio application (only tested on 1903).

When CorePrio was not present, AMD's Ryzen Master software was installed and was set to enable Dynamic Local Mode (DLM).

For testing photogrammetry applications, we have four image sets that we own the rights to – covering both smaller and larger size model and map projects. The exact photos from each set that are used in each application vary slightly, but if you want to check them out the smaller image sets are included in our public benchmarks which you can download and run if you want to compare your system's performance to what we have measured in various articles.

Each image set was processed 2-3 times per software configuration, and the fastest overall result was used for the comparisons below.

Here is a chart showing the Threadripper 2990WX's performance in the latest version of Pix4D: 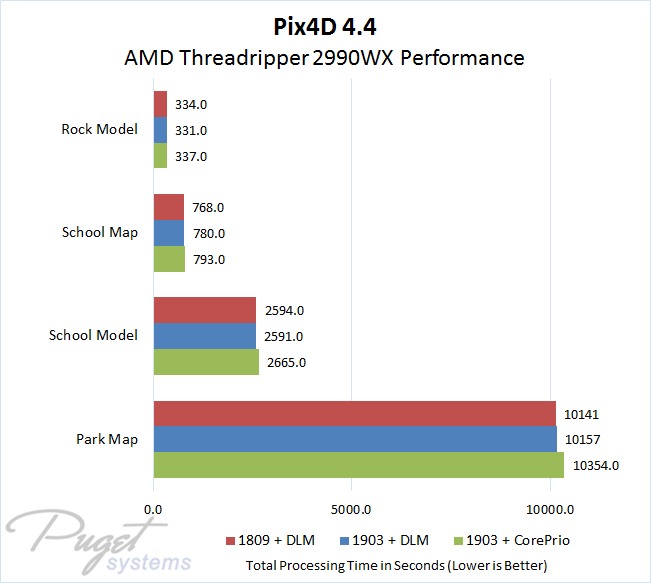 There is very little difference across all three tested software configurations. If anything, it looks like CorePrio slightly slows things down – but the numbers are probably within the margin of error.

And here is the 2990WX's performance in RealityCapture: 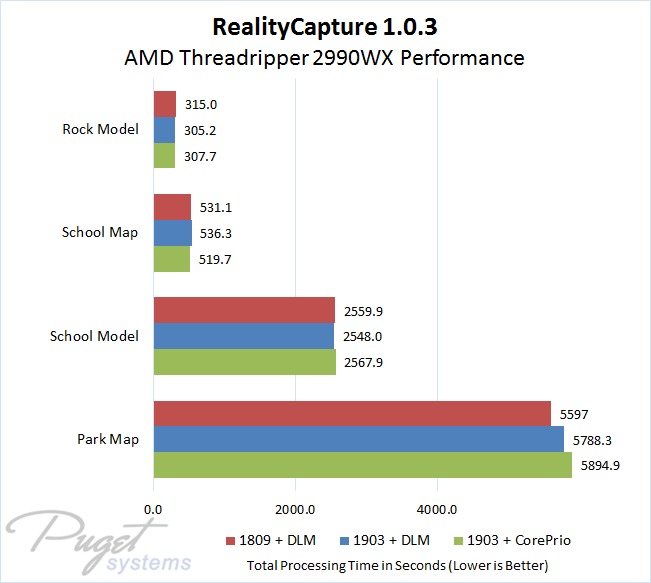 RealityCapture shows a little bit wider difference between these software setups, but not in a consistent direction. It is also worth mentioning that, of the three photogrammetry programs we tested, this one has by far the most variance from one run to the next.

And lastly, a graph of 2990WX performance in Metashape: 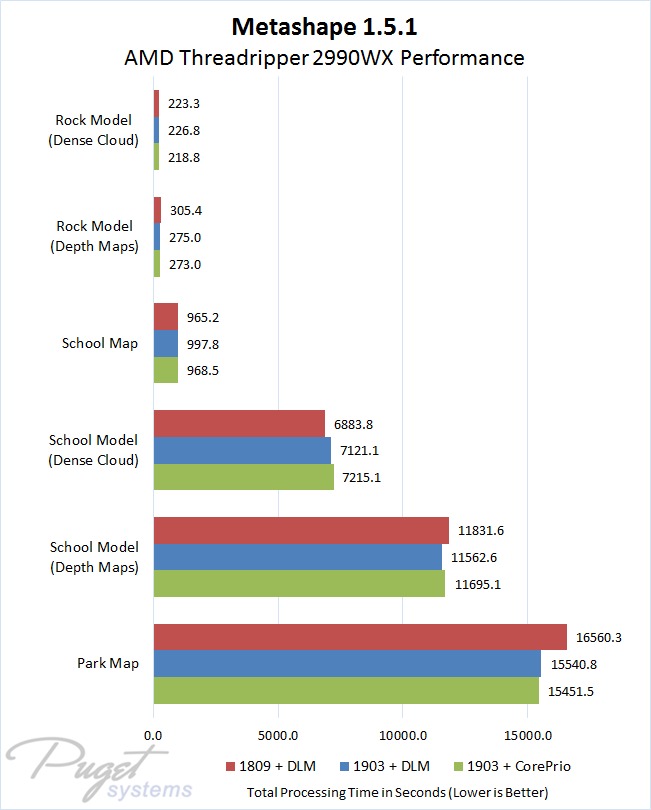 Here we do finally see some tangible gains in speed with 1903. Of the six tests here (there are two for each of the Model image sets, because Metashape offers different methods of generating 3D meshes) two are so close as to be almost identical, one shows a small slowdown, one shows a slight improvement, and two show substantial improvement. That is still a very mixed bag, but in particular with larger map projects it looks like making sure you are on Windows 1903 is a good idea. CorePrio didn't make as big of a difference, though: its results were slightly above or below the plain 1903 results, and probably within the margin of error of our testing.

Unfortunately, it doesn't look like improvements Microsoft made in Windows 10 version 1903, or those from the folks behind CorePrio, really make much difference in this type of application. It is generally a good idea to move to the latest version of Windows once it is stable – and when you have plenty of time for the update and to deal with any knock-on effects it might have – but I wouldn't rush to it in the hope of gaining performance in photogrammetry. If you use Metashape you might see some gains with large projects, but that is about it. And there is definitely no need to install the third-party CorePrio software for these workloads.

Even the gains that we saw in Metashape are not enough to make AMD's Threadripper 2990WX (or any other models in that family) a good choice for that application, though. Intel's Core i9 9900K is far faster in both Metashape and RealityCapture. The 2990WX does okay in Pix4D, but even there Intel offers a model that gives better overall performance consistency for a little bit higher price.