RealityCapture 1.0.3: Intel Core i7 & Core i9 vs AMD Threadripper Performance

Written on May 28, 2019 by William George
Share:
Always look at the date when you read a hardware article. Some of the content in this article is most likely out of date, as it was written on May 28, 2019. For newer information, see our more recent articles.
Table of Contents

RealityCapture, like other photogrammetry applications, is built to take a batch of photographs and turn them into digital, 3D models. The many steps involved in that process can take a lot of time, and utilize both the CPU and GPU at different points. We recently put together a benchmark tool for RealityCapture, and in our first article focusing on this software we are going to take a look at how Intel's Core i7 and i9 processors stack up against AMD's Threadripper chips.

Here is a list of the hardware we tested RealityCapture on. The video card and RAM capacity were kept the same across all platforms, to avoid either of those throwing off the comparison. All results included here are from after the recent Windows 10 security patch addressing MDS vulnerabilities in some Intel processors, but we did see a small increase in Core i7 9700K and i9 9900K performance when we moved to the newer Z390 motherboard - which helped offset some of the performance those chips lost because of the update.

For those who want to dig further into the differences in how each CPU performs, here is a table showing the times for each step within RealityCapture on each of the image sets: 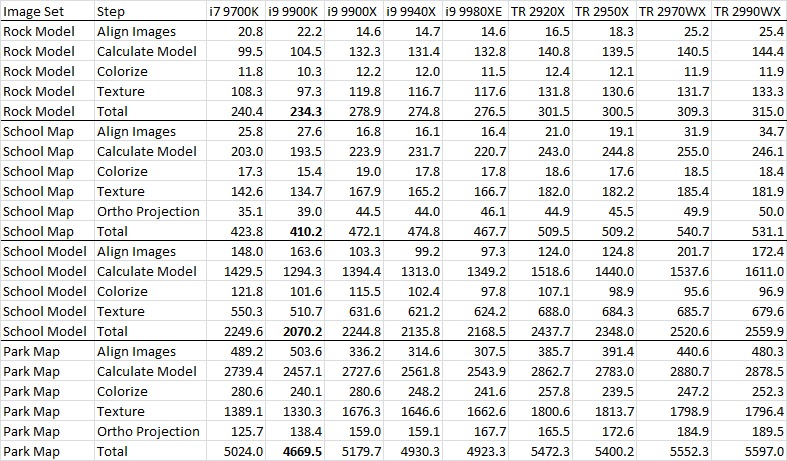 Interestingly, and unlike other photogrammetry software we have tested, Reality Capture always ran the fastest on a single processor: Intel's Core i9 9900K. Its sibling, the i7 9700K, was close in most cases - just a hair behind on the smaller projects, with the gap widening a bit on the larger ones. Presumably that is due to its slightly lower clock speed, and perhaps its lack of Hyperthreading also contributes to the increased difference with bigger image sets.

All of the higher core count processors did poorly, though, with Intel's Core X and AMD's Threadripper segmented based on processor family more than anything else. Overall, it looks like top clock speed is what matters for RealityCapture rather than the number of cores.

With incredibly steady performance results across all of our benchmark tests, it is easy to make a single processor recommendation: Intel's Core i9 9900K is the chip to get for RealityCapture, hands-down. It was the fastest at processing all four of our datasets.

If you are on a budget and need to save some money, especially if you work mostly with small image sets, the i7 9700K isn't far behind.

Stay tuned in the coming weeks as we take a look at GPU performance, and whether multiple video cards help in RealityCapture. Additionally, once we have all of that data, we will be adding recommended systems for RealityCapture to our website.

It's funny that this site has morphed into perhaps the most complete review site for video, photo and 3d rendering tests to be found anywhere. Obviously the goal was to increase brand awareness of the systems your company sells but whoever came up with the idea of putting together a review site dedicated to the above within the company's sales site was a genius.

If I may offer a suggestion for a test, AMD's APU's, like the 2400g and the upcoming replacements, as well as Intel's Coffee Lake and newer cpu's, have reasonably competent integrated graphics chips, how about a test showing how these processors perform when working with GPU powered video filters, for people that may be amateurs or hobbyists and can't spend thousands on a top of the line system with gobs of ram and a $800 video card.

Some may find it interesting and it may help you guys market a low end, entry level video editing system for the casual user.

Thank you for the kind words!

The video side of things is more Matt's domain, but I think he has done a little bit of work with Intel's onboard graphics in regards to video encoding. I'm sure he will see your comment here as well :)

For a lot of the stuff I work on, though, NVIDIA cards are a requirement. Both Pix4D and RealityCapture require them, though I am going to be testing Metashape on a couple of AMD graphics cards soon... and pretty much all the GPU-accelerated rendering engines (Octane, Redshift, etc) are NVIDIA-only as well. So I have a lot less opportunity to test on-chip graphics in any meaningful way :(

Good detailed comparison, there's not a lot of formal benchmark content going around for these types of applications despite how many users (with generally high end hardware) use them! If you're looking for feedback on expanding this, would be interesting to see the Zen2 AM4 CPUs tested when they're released, plus single and dual Xeon benchmarks relative to these results too?

I do plan to test the upcoming Ryzen 3rd gen processors, if we get samples of some of the higher end models. On the Xeon side, the single-chip Xeon W series should perform very closely to the Core X processors in this article - they are based on the same tech, and have very similar core count and clock speeds. Dual Xeons would just mean even more cores, but lower per-core clock speeds... and given that higher core counts didn't help with either the Core X or Threadripper lines, I don't think we'd see anything meaningful in that testing. Unless the developers of this software make big changes, the main focus of my testing going forward will be on CPU releases that improve clock speed or instructions per clock, since core count doesn't seem to be a big factor in this application.

Excellent review, eager to see how Ryzen 3000 will perform.