Skip to content
Always look at the date when you read an article. Some of the content in this article is most likely out of date, as it was written on October 19, 2018. For newer information, see Cinema 4D: Intel Core i7 9700K & i9 9900K Performance

Intel just released their 9th Gen Core Series processors, which have both higher clock speed and more cores than the previous mainstream generation. Since Cinema 4D benefits from both clock speed and core count, in different ways, we are going to compare these new CPUs against other mainstream and high-performance desktop processors from both Intel and AMD.

To create a comprehensive comparison, we included Intel's higher-end Core X series as well as AMD's Threadripper models – along with the previous-generation Core i7 8700K, which these new chips are replacing, and AMD's direct competitor to them: the second-gen Ryzen. If you would like more details about the full hardware configurations we tested, click here to expand the following section.

Cinebench provides three scores when running in advanced mode: CPU (it isn't specified, but this is the multi-core result), CPU (Single Core), and OpenGL. The last of those is somewhat impacted by the CPU, but is more about the video card – so we aren't including it here. We'll start off instead with the overall, multi-threaded CPU scores. This shows how each CPU compares when rendering a still frame with the built-in C4D renderer. AMD's processors are shown in red, with Intel's in blue – and the new models bolded, to stand out: 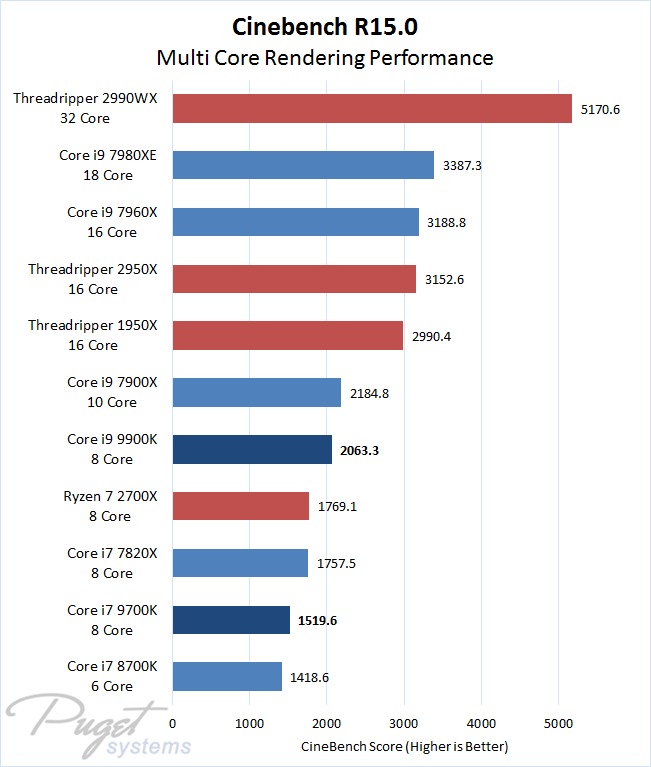 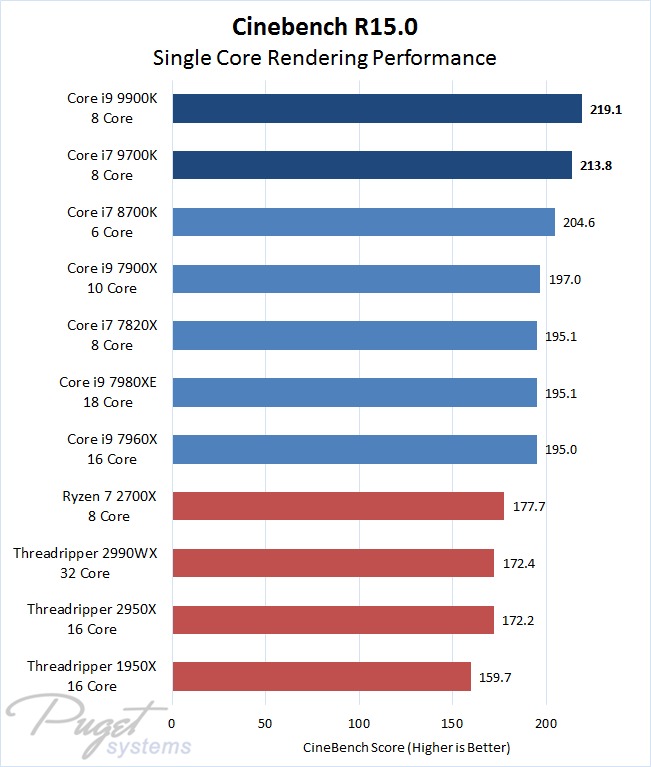 The first graph above, showing multi-core rendering performance, gives a good overview of how the new Core i7 and i9 processor stack up for heavily threaded applications. The i7 9700K outpaces the older i7 8700K thanks to two additional cores and a little higher clock speed, even though it does not have Hyperthreading. The i9 9900K scores almost 50% higher, though, since it has the additional cores and clock speed while maintaining Hyperthreading as well. None of those CPUs compete for the top multi-core performance slot, though. For multi-threaded, CPU-based rendering AMD's Threadripper 2990WX is still the way to go.

Single-core performance is a different story, and in that workload, these 9th Gen Intel processors really shine. They are 4-7% faster than their 8th Gen counterpart, and far faster than Intel and AMD's higher core count models. This is an indication of general performance within Cinema 4D for modeling, animation, and physics simulations – which will all be faster in this generation.

How important these performance metrics are will depend on each user's workload. To figure out which processor and platform are the best for you, consider how much time you spend modeling, animation, setting up simulations, and rendering.

That depends on how you use Cinema 4D. If all you do is modeling and animation, then the Core i7 9700K offers a great value. If you do some rendering as well, the Core i9 9900K is going to be almost 50% faster. If you spend most of your time rendering, though, go for AMD's Threadripper 2990WX. 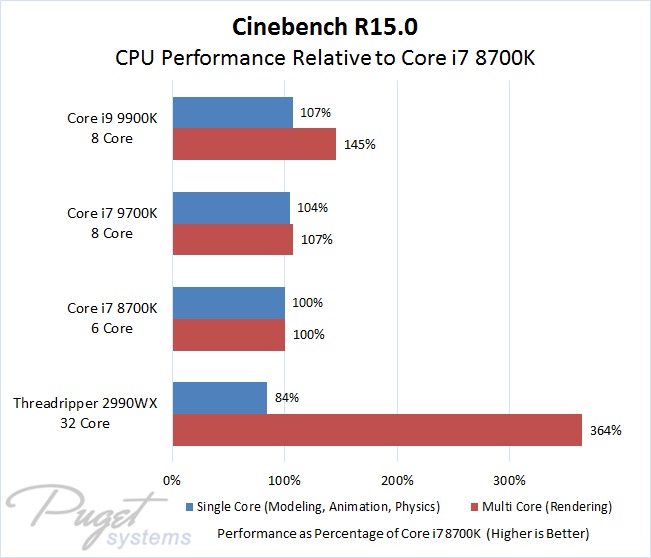