Skip to content
Always look at the date when you read an article. Some of the content in this article is most likely out of date, as it was written on October 19, 2018. For newer information, see V-Ray CPU Rendering: Intel Core i7 9700K & i9 9900K Performance

For this article, we used it to measure CPU-based rendering performance on the new 9th Gen Intel Core Series mainstream processors: the Core i9 9900K and Core i7 9700K. These chips are not built for rendering, but they do feature more cores than previous models in this segment – along with very high clock speeds. Their high clocks make them ideal for applications like 3D modeling, animation, and motion graphics… so seeing how well they can handle rendering tasks may be helpful for many users in those fields.

Since these mainstream Intel processors are not going to be in the running for the best V-Ray performance, we limited the comparison to other single-socket CPUs. We have included both Intel's higher-end Core X series as well as AMD's Threadripper models, which currently hold the title for the best single-CPU scores in V-Ray (and indeed, in CPU based rendering as a whole). We've also got the previous-generation Core i7 8700K, which these new chips are replacing, and AMD's direct competitor to them: the second-gen Ryzen.

Here are the render times, in seconds, for the various processors we tested in V-Ray Benchmark 1.0.8 – with AMD models in red and Intel in blue. The new Core i9 9900K and i7 9700K chips are shown in a darker blue, to make it easier to spot them in the lineup: 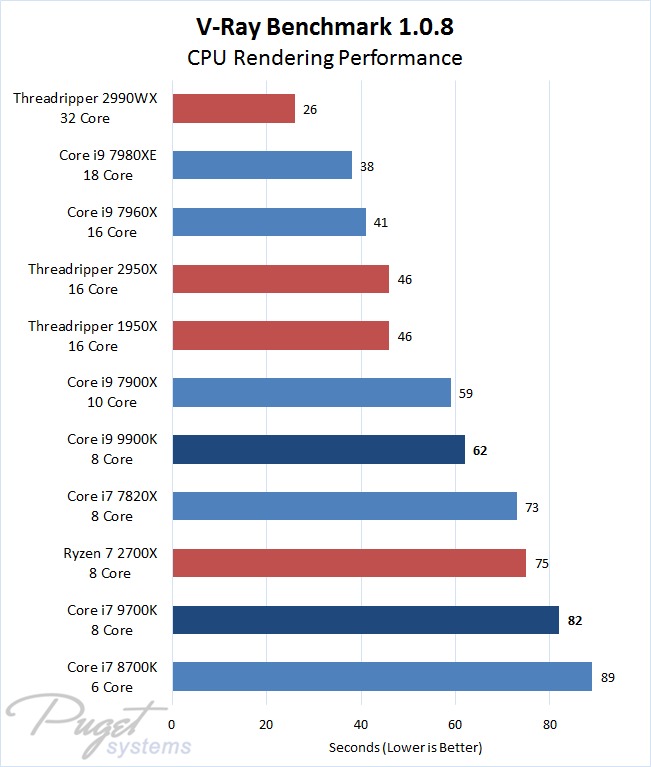 As expected, these new 9th Gen Intel Core Processors are not going to win any awards for V-Ray rendering performance. However, they are a solid improvement over the previous-generation Core i7 8700K – and the i9 9900K nearly catches the 10-core i9 7900X despite not having as many cores. The clock speed these chips have really helps, and while it may not be the most important factor for rendering it does let them excel in areas like 3D modeling, animation, and motion graphics. If you split your time between that sort of workload and rendering, you'll have to decide which is more important to you.

What is the Best CPU for V-Ray Rendering?

AMD's Threadripper 2990WX currently offers the best single-socket performance in V-Ray's CPU benchmark. Not only is the 2990WX the fastest single-processor solution, but it is less expensive than many slower options from Intel. It also supports lots of PCI-Express lanes, if you want to stack multiple video cards to use V-Ray's GPU rendering engine as well.