Skip to content
Always look at the date when you read an article. Some of the content in this article is most likely out of date, as it was written on October 19, 2018. For newer information, see our more recent articles.

PhotoScan is a photogrammetry program: an application that takes a set of images and combines them to create a 3D model or map. This article follows in the footsteps of a series we did earlier in 2018, looking at how different aspects of computer hardware affect PhotoScan performance. For more info, check out the introduction to that series.

PhotoScan makes use of the video card in a computer to assist with the computation of certain steps. The primary GPU accelerated steps are aligning photos and building a dense point cloud (a 3D representation of physical points that are seen from multiple angles in different photos). Because the video card plays a big role in these calculations, the model of video card (or GPU) used can have an impact on the amount of time those steps take. In this article, we are taking a look at NVIDIA's new GeForce RTX 2080 and 2080 Ti cards to see how they compare to each other and to previous GeForce models.

Even though these processing steps in PhotoScan are GPU accelerated, the CPU still plays a role in performance as well. We just published an article looking at the new 9th Gen Intel Core processors, which were by far the fastest chips available for this application. As such, we performed this GPU comparison using the Core i9 9900K: a very high clock speed, 8-core processor. It should give the best chance to see what differences there are, if any, between the new GeForce RTX video cards and the older GTX and Titan models.

All tests were conducted with "High" quality settings. If you would like more details about the full hardware configuration we tested on, and the image sets we used within PhotoScan, simply click here to expand the following section.

Here are results for the Building image set. The graph shows overall processing times, with the new GeForce RTX series cards bolded to stand out better. The raw data for each step is included in a chart below the main graph. 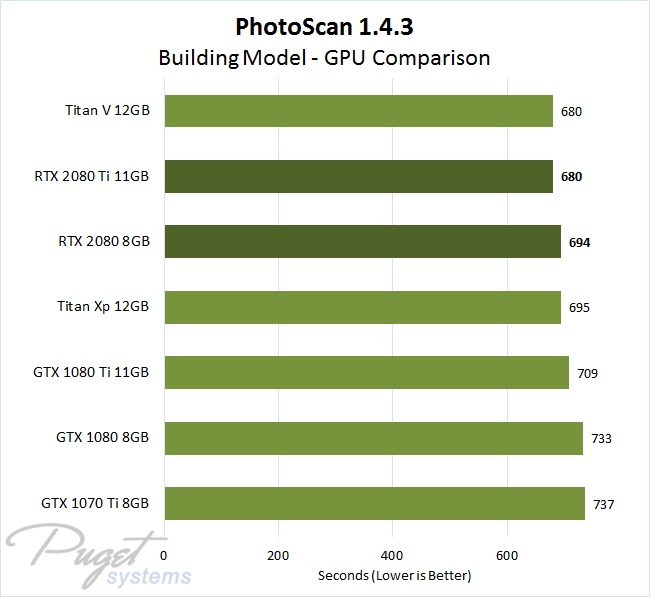 And here are results for the Monument image set, formatted in the same way and with a similar data chart at the bottom: 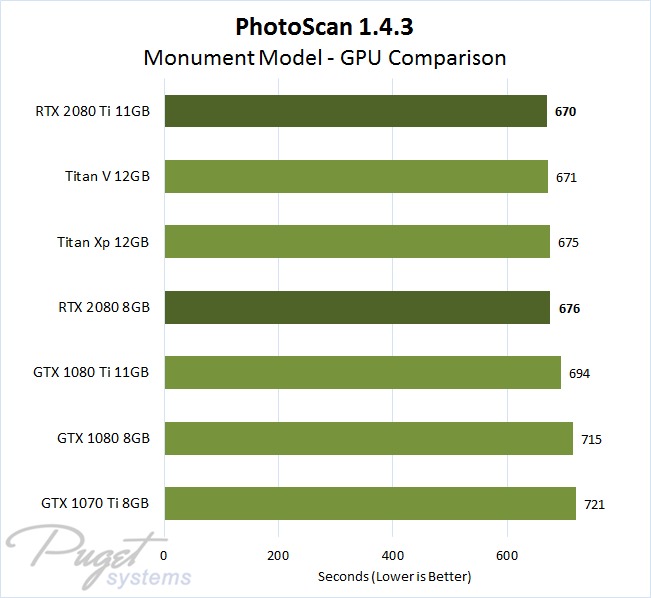 As shown above, there is definitely a correlation between using a higher-end video card and how long PhotoScan processing takes. However, the difference is pretty minimal: there is less than a 10% spread between the fastest and slowest cards in our tests.

No matter which of these cards you use, there is a major improvement in performance compared to the CPU alone. We didn't include that as a data point in this article, but we have looked at it before and found that even a high core count CPU, by itself, takes several times longer to build the dense point cloud than an affordable mid-range video card.

One other thing to keep in mind with the results shown above is that we did our tests at "High" quality. There is an option above that for building the dense cloud, "Ultra High", which will take substantially longer. Many users might also work with larger image sets, which also take more processing time. Because of that, the performance difference between video cards will vary somewhat based on your exact workload – but in general, faster video cards will have a measurable impact on the speed of aligning photos and building the point cloud.

Yes, the new RTX 2080 and 2080 Ti performed quite well in PhotoScan. They aren't massively faster than the previous generation, but they do cut processing time by about 5% compared to the GTX 1080 and 1080 Ti. In fact, they perform on par with the much more expensive Titan Xp and Titan V cards.