The sweetest thing about their position is that they have a lot of help. With the market share so large, Intel receives large support from all of the major computer manufacturers. Gateway, Dell, Compaq...they all are heavy on the Intel market. This is not surprising! When 80% of their customers come looking for an Intel-based computer, it is in their best interest to comply! Not only that, but it is in their interest to help push Intel sales. So now we have every main manufacturer putting out advertising for Intel. "Intel Pentium4 inside" is a slogan that has caught on with the consumers.

When we look at the computers from the major manufacturers, we see one striking trend. The processor is the best part of the whole system. Not only that, but the processor is sometimes the only part of the system of any value! In that single characteristic, we can draw a very important insight -- the large manufacturers do not care about quality systems or optimal arrangements. They care about making sales. They know that to the average consumer, "Intel Pentium4 inside" is the only slogan they know. When they are looking for a computer, the only requirement is that it has a Pentium4 processor. That is why the rest of the system can be poor quality -- the processor is the only thing making the sale. So why aren't they using AMD processors? The same reason. Why attempt to change the minds of your customers when you can make a quicker sale by giving them exactly what they want!? And there lies the perpetual nature of Intel's marketing. By retaining a large market share, manufacturers are happy to go along for the ride and get a piece of that market!

Under the conditions outlined so far, it seems nearly impossible for any secondary manufacturer to make any gain in the market. It is very impressive that AMD is doing just that. They aren't doing it with clever marketing techniques or manufacturer contracts. Their strength is simple -- build faster processors, and sell them cheaper. It is working. Over the last few years, AMD has made amazing gains, and is placed very well in the market. The graph below is certainly out of date, but it clearly shows the growth of AMD. 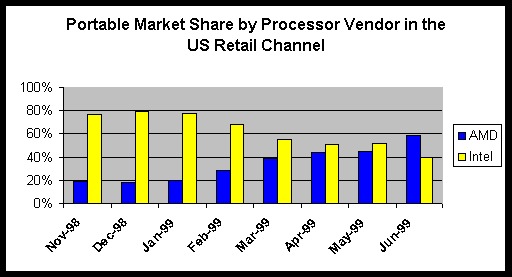 In fact, these strengths of the AMD processor line have been recognized for years by the technologically inclined few. As more and more people become convinced that AMD may be a better value than Intel, we are seeing a crucial change in the ongoing battle. Since the large computer manufacturers can do nothing but follow public opinion, you are now seeing Dell and Gateway with a full line of AMD systems. This is quite a blow to Intel. What will they do now that their delicate market position is being shaken? We are already starting to see the answer, as their newest marketing efforts are focused on high end audio and video editing. I believe this to be a very good move for Intel, because it puts them into a market that they should have been in all along!

Pentium4 has two major advantages over AMD: they are more stable and they are capable of a much higher utilization of system memory. Stability is definitely a quality that they should be pushing, but have simply chosen not too. Their memory bandwidth is what they are focusing on now. This capability is why Pentium4 systems are most often paired with RDRAM. RDRAM is capable of enormous bandwidth, allowing large amounts of data to be quickly transferred from the CPU to the system memory. This configuration allows CPU and ram intensive tasks to run very quickly, which means that a Pentium4 system is a great choice for high-end video editing.

The Strengths of AMD

Not everyone does high end video editing, and of those who do, not everyone has the extra $1500 to spend on a Pentium4 system. AMD is there as their alternative. As I have always said, AMD's main strength is in their great prices. It has been said that AMD's prices are so low that it arouses suspicion regarding their quality. How can something so cheap be just as good? This is an amusing problem, though a real one. TomsHardware.com has been running comparison tests between the two processor lines for as long as they have been around, and the latest round of tests revealed some interesting results. The Athlon XP 1800+ processor simply blew away a Pentium4 2GHz processor in video editing! So, once again, Pentium4's position is being rocked, and it will be interesting to see what happens as time goes on.

For years, AMD has been suffering from a direct comparison of CPU clock cycle speeds. For example, when you have a 1.4Ghz Pentium4 processor and a 1.4Ghz AMD processor, it is natural to assume that they are essentially the same speed. This is bad for AMD, because at the same clock speed, an AMD processor is actually faster. This is due to the architecture of their design -- during each clock cycle, and AMD processor performs more operations. An AMD processor, then, is always faster than it sounds to the average consumer. This introduces a great deal of confusion to most people. How can anyone know which processor is faster without pouring over the benchmarks and testing data? AMD has been slow to address this problem, but they have now taken the first steps.

AMD finds its solution in a new 'performance based' rating system. This is a shaky concept, but was a good move by AMD. What it means is that they will no longer label their processors according to their clock speed, but will create names that appeal to public perception to attempt to accurately describe the processor speed. For example, the Athlon XP series has a processor that runs at 1.5GHz, and they have named the processor the 1800+. You can see what they're doing. They know that their 1.5GHz processor is the equivalent to a 1.8GHz Pentium4, so they have given it that label (although it is interesting to note that the 1800+ AMD blew away the Pentium4 2.0GHz processor in video editing, which simply means that AMD is being careful to be very conservative in their labeling). This new system has the potential to throw the whole CPU scene into confusion, but at this time, it is the only way that AMD can get the speed recognition that it deserves.