In order to debunk this myth, we examined a number of supposed SATA 3Gb/s cables and compared them to a SATA 6Gb/s cable in our SATA cables: Is there a difference? article. In that article, we found no significant physical or performance difference between any of the cables we tested. Due to how long ago that testing was performed, however, we have recently had some readers that have questioned the relevancy of that article. SATA drives are faster now than they were when SATA 6Gb/s was new and advances in SATA controller technology might change our results.

In order to determine if there is still no difference between SATA cables, we decided to revisit this topic. Luckily, relevant hardware and cables are readily available for us as a custom computer company, so this type of testing is very quick and easy for us to do. We will be using the latest Intel Z77 chipset, the fastest mainstream Intel SSD available, and cables that are currently being bundled with both Asus motherboards and Intel SSDs.

Some of the cables we used in our original SATA cable article are no longer being manufactured, so we decided to update our test cables to reflect those that you would find included with modern hardware. Many of these cables are not actually labeled as either SATA 3Gb/s or SATA 6Gb/s, but by researching the model number of the cable itself we were able to find the rated SATA revision for these cables.

Since our original SATA cable article, a few things have changed in regards to the physical cables. First, most of the cables we are testing have four ground wires (the bare wires) rather than three that was the norm in our last article. Second, one of the cables (The black Intel cable) actually has a slightly smaller gauge of wire. By our measurements, this wire (not counting the shielding) is .25mm in diameter (30 gauge), while the other cables are .4mm in diameter (26 gauge). We will find out if this has any impact on performance when we run our performance testing later in this article.

To compare the performance of each cable, we configured our test SSD as a secondary storage drive and ran CrystalDiskMark with each cable. We will be testing using both compressible (All 0x00) and incompressible (Random) data. We recently benchmarked the performance difference between these two types of data in our SSDs: Advertised vs. Actual Performance article, and the difference is large enough that we feel it necessary to use both types of data in our testing.

Our test system consists of the following hardware: 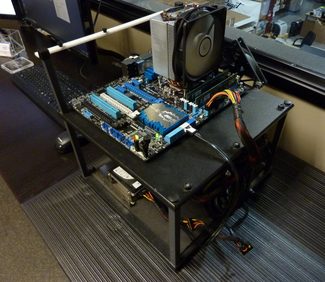 The Intel 520 480GB is one of the fastest mainstream drives currently available, with an advertised Sequential Read speed of 550 MB/s and a Sequential Write speed of 520 MB/s. This is much higher than the actual throughput of SATA 3Gb/s (roughly 300MB/s), so it should be very clear if the drive is being limited to SATA 3Gb/s speeds. Between each test we will perform a secure erase on the hard drive to ensure that the drive is operating at peak efficiency. 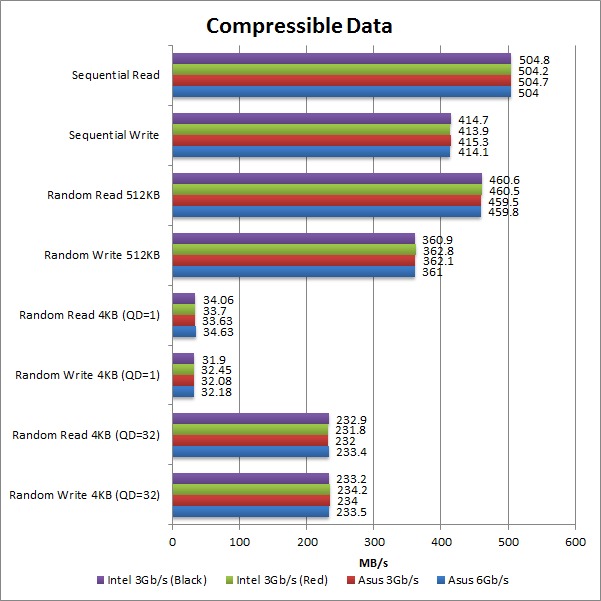 Starting with compressible data, we see virtually no performance difference with any of the cables. There are small variations, but all are well within the margin of error for a hard drive benchmark. 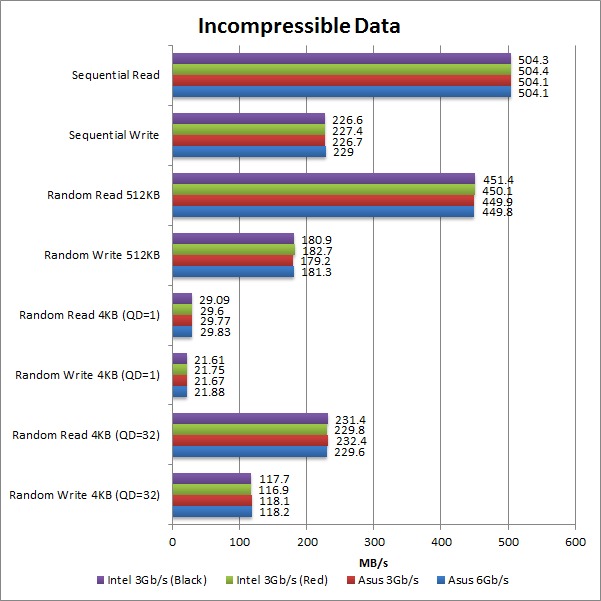 For incompressible data, we again see no performance difference outside of normal testing variations. Even the black Intel cable with a thinner gauge of wire shows no performance drop at any point in our testing.

Our results confirm that despite the faster hardware available today, there is still no performance difference between SATA 3Gb/s and SATA 6Gb/s cables. The SATA 3Gb/s revision only supports transfer speeds around 300MB/s, yet we saw transfer speeds up to 500 MB/s with each cable that we tested. This clearly shows that the SATA revision designator on cables is mostly just marketing and has no bearing on the actual performance the cable can provide.

This is not to say that all cables are created equally, but rather that you cannot base the quality of the cable from the SATA revision it is supposed to be compatible with. A wire is a wire, and as long as the gauge of the wire is adequate, the end connections are good, and the right metal is used, there is no performance difference between one cable and another. The place where some users get into trouble is when they are using a particularly cheap cable that has either bad connections or uses sub-par materials. Even in those instances, however, you would see problems with the drives dropping or not being detected long before you see any sort of decrease in performance. 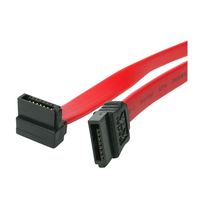