The Future of Computing

I should just begin by saying that this article is different from the others. While our other articles can be quite useful to aid you in the design or purchase of your next computer system, this article is simply a fun look at things to come.

As a physics major in my fifth year at the University of Washington, I am often interested by the applications of the principles I am studying. My focus, modern physics, is quite exciting to me as I am often studying theories and experiments performed only months earlier. In a Quantum Mechanics class, I was given the opportunity to give a short lecture on the application of quantum mechanics to the area of computing, and this article will be focused on that exciting subject. The topic of my lecture and of this article is Quantum-Dot Cellular Automata -- a medium that may support super-small computers in as little as the next ten years!

We must begin by describing a quantum dot, which is a small grouping of conducting atoms -- very small. Approximately 4 billion quantum dots will fit on the head of a pin. A Quantum-Dot Cellular Automata (QCA) cell consists of four quantum dots, in a square arrangement, as pictured below. Each QCA cell contains two additional electrons, which assume opposite diagonals due to an electric repulsion. Thus, a QCA cell has two states, which we can call state -1 and +1. The electrons can "flip" from state to state through a quantum phenomenon called tunneling. Incidentally, it is the properties of quantum tunneling that give each state its stability. So, what we have here is a very, very small switch. This switch is the equivalent of today's 1 (voltage high) and 0 (voltage low) in computer hardware.

The most straightforward use of a QCA cell is in the transmission of information. If you put two cells side by side, the electric interaction of the electrons will cause cells next to each other to assume the same state. Therefore, if you have a long line of cells, and if you define the state of one cell, the entire line will quickly assume the same state.

This is called a QCA Wire. Since 4 billion quantum dots can fit on the head of a pin, this means that you can have literally thousands of wires in something as thin as a strand of hair. Amazing! On top of that, the data transmission is very reliable. In today's wiring, great care must be taken to prevent signal degradation. With QCA, quantum tunneling effects tend to stabilize the system. Remember, those electrons want to stay as far apart as possible, and even a slight nudge will send them all the way to the corners. Therefore, a QCA system is, by nature, not vulnerable to signal degradation.

Of course, a QCA wire is just the beginning. By being creative in the joining of multiple wires in different orientations, we are able to create functioning logic gates. Logic gates are the building blocks of computer hardware. Let's take an example. A majority gate, also known as an AND gate, looks at two inputs, and only outputs a 1 if both inputs are 1. Under the QCA model, we have a similar function. A QCA majority gate will look at three inputs, and return a +1 if at least two inputs are +1. This gate is pictured below.

With similar arrangements, we are able to construct all the same logic devices that are used in today's computer hardware. We are able to create inverters, AND gates, OR gates, XOR gates, and even gates that are programmable in function! For more information on these functions, Notre Dame has a great resource, which you can access by clicking here.

The main problem with this entire concept is thermal effects. With such a small system, thermal energy can be enough to send an electron out of its position, throwing the entire system off. It is in this problem, however, that we realize even greater potential. Since the two electrons in a QCA cell will repel with an even greater force when closer together, we can increase the stability of the system by making it even smaller! Unfortunately, we simply do not have the fabrication techniques to do that today. With the smallest QCA arrays today, we are capable of obtaining stable operation at no higher than 7 degrees Kelvin -- a temperature that is not only fatal to humans, but very expensive to maintain. 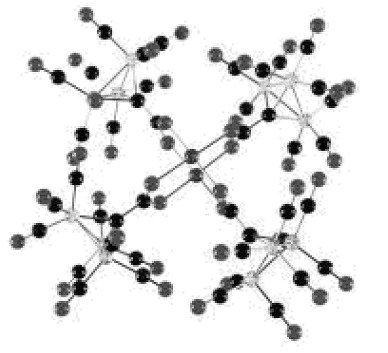 If the QCA cell size could be made as small a few Angstroms (on the order of the size of a molecule), the repulsion energy of the electrons would be comparable to atomic energy levels - several electron volts. This is not feasible with the semiconductor implementations that we have been thinking about, but may ultimately be attainable in molecular electronics. For example, if we can engineer a single molecule to be in the shape of a QCA cell, as pictured to the left, then the thermal effects would be dismissible. In fact, with a QCA cell of that size, the maximum operating temperature increases to 700K -- a temperature that is hot enough to melt humans. In other words, thermal effects would no longer be a problem!

Clearly, we have a ways to go. We will likely see the first quantum computers in cryogenic environments, but as we are able to produce smaller and smaller arrays, we should be up to room temperature and beyond in no time. The end result will be a quantum computer that is much faster than today's computers, and too small to see without a magnifying glass! Just how fast will they be? Systems operating at room temperature will attain speeds 10 to 100 times faster than current systems, will be denser by a factor of 5 to 100, and will have a lower power consumption by a factor of more than 50. Logic devices will operate at over 5.0GHz, and a QCA wire transmission rate is expected to achieve 15 terabits per second!