Whether the new 11th Gen Intel Core processors are a good investment for DaVinci Resolve depends on a number of factors including your budget and how important Fusion performance is in your workflow.

Overall, we would rank the Core i5 11600K as a better option over AMD if you are on a tight budget due to its higher Fusion performance, while the Core i7 11700K is roughly equal to the similarly priced options from AMD from a value standpoint. The Core i9 11900K, however, you likely won't want to consider since, depending on the workload, it performs either the same as the Core i7 11700K, or is beaten by AMD's offerings.

Earlier this month, Intel announced their new 11th Gen Intel Core desktop processors (code-named "Rocket Lake"). These new processors are marketed as having substantially better per-core performance compared to their previous 10th Gen Core models, but the top-end model (the Core i9 11900K) has two fewer cores than the previous generation which may hamper performance in some applications.

This loss of total cores on the highest-end SKU is likely to be especially problematic in applications like DaVinci Resolve that can take advantage of a decent number of CPU cores. However, Intel is boasting up to a 19% IPC (Instructions Per Clock) performance improvement over the previous generation which should considerably improve performance with the i5 and i7 models and might be just enough to offset the loss of two cores on the Core i9 11900K. Whether this will let Intel take a lead over AMD in terms of performance, however, will have to wait until after we have run our benchmarks. 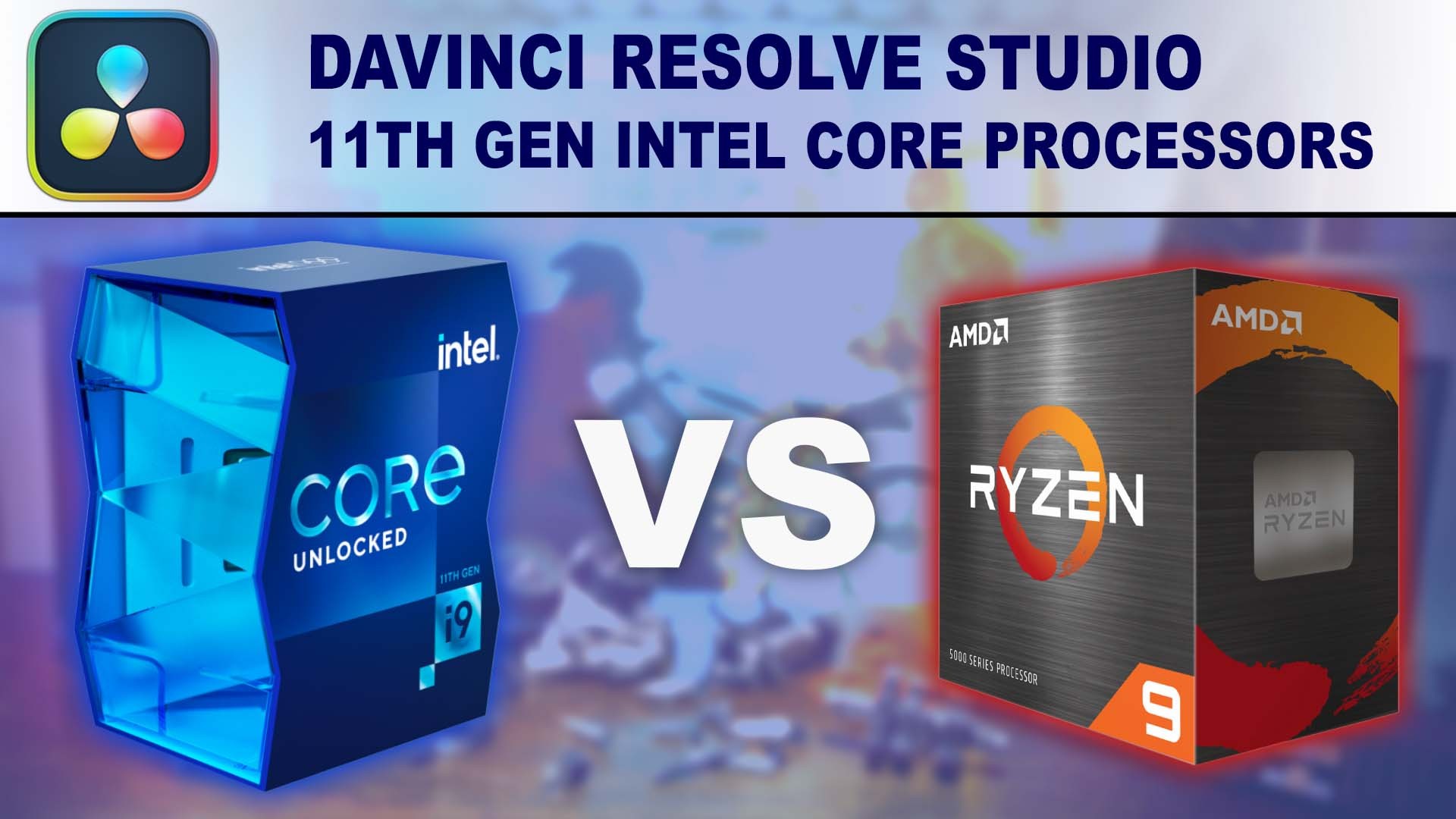 In this article, we will be examining the performance of the new Intel Core i9 11900K, i7 11700K, and i5 11600K in DaVinci Resolve Studio compared to a range of CPUs including the Intel 10th Gen and AMD Ryzen 5000 Series processors. If you are interested in how these processors compare in other applications, we also have other articles for Premiere Pro, After Effects, Photoshop, Lightroom Classic, and several other applications available on our article listing page.

Second, the power limit settings that the motherboard and CPU are using to determine what frequency to run the CPU at under load is extremely muddy with the 11th Gen CPUs. There are the Intel "stock" settings, but also what are essentially overclocked settings that allow the CPU to maintain higher turbo limits for longer periods of time in exchange for dramatically increased CPU power draw and temperatures. The idea is that these power limits allow systems that have sufficient cooling to run the CPU at faster speeds, but we still have a lot of work to do to determine exactly what power limits we feel are safe for our workstations. For now, we opted to stick with the default on the Gigabyte Z490 board we are using, which is to run with the higher power limits. This will give Intel a bit of a boost in terms of performance, however, which is worth keeping in mind when examining the results.

Feel free to skip to the next sections for our analysis of these results to get a wider view of how each configuration performs in DaVinci Resolve Studio. 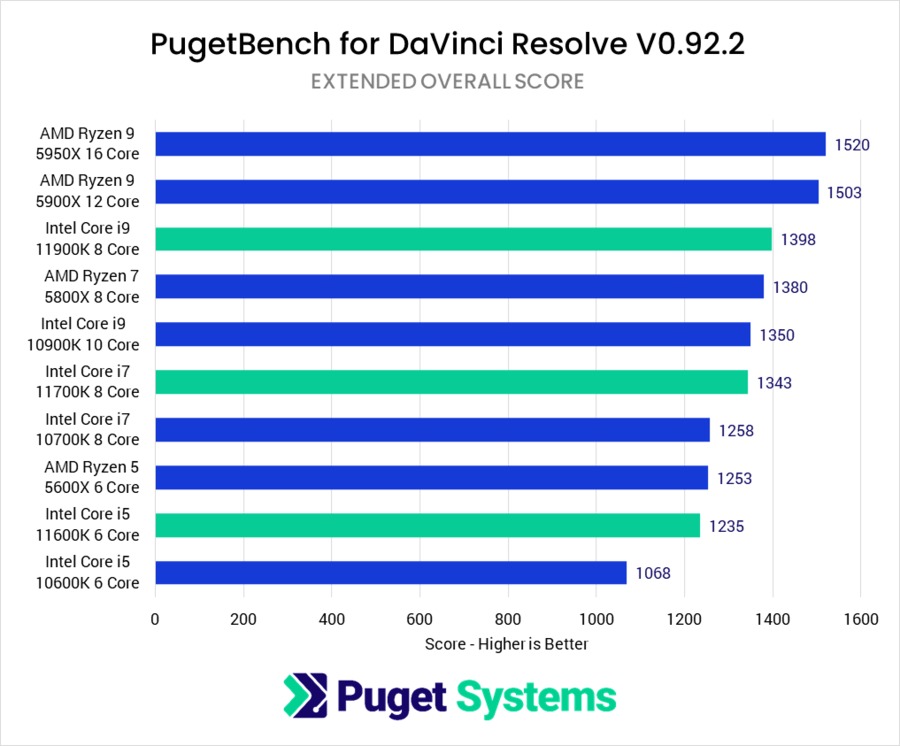 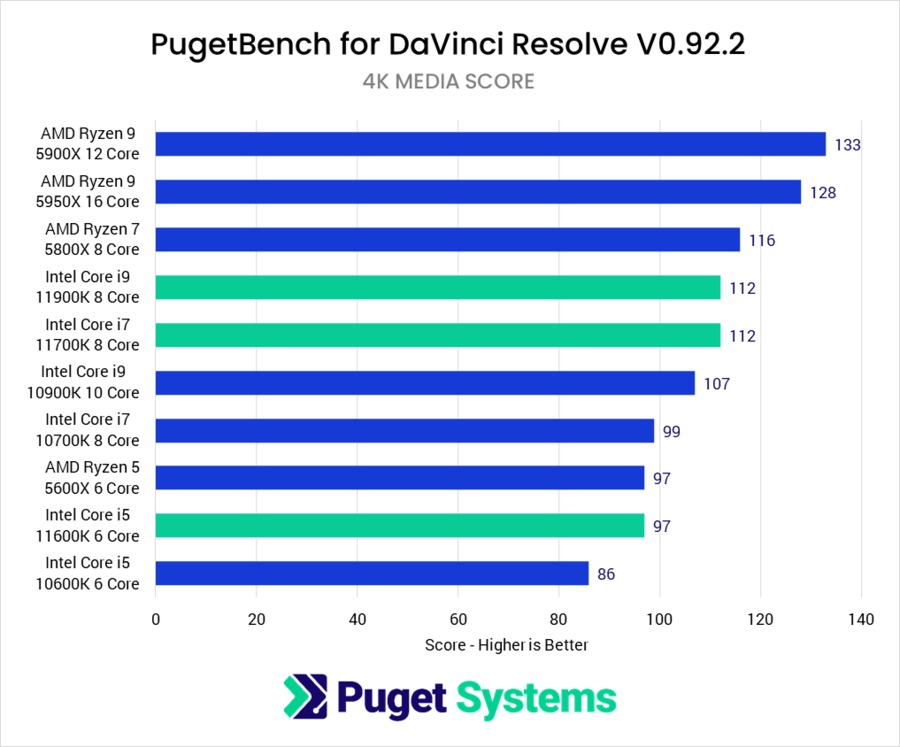 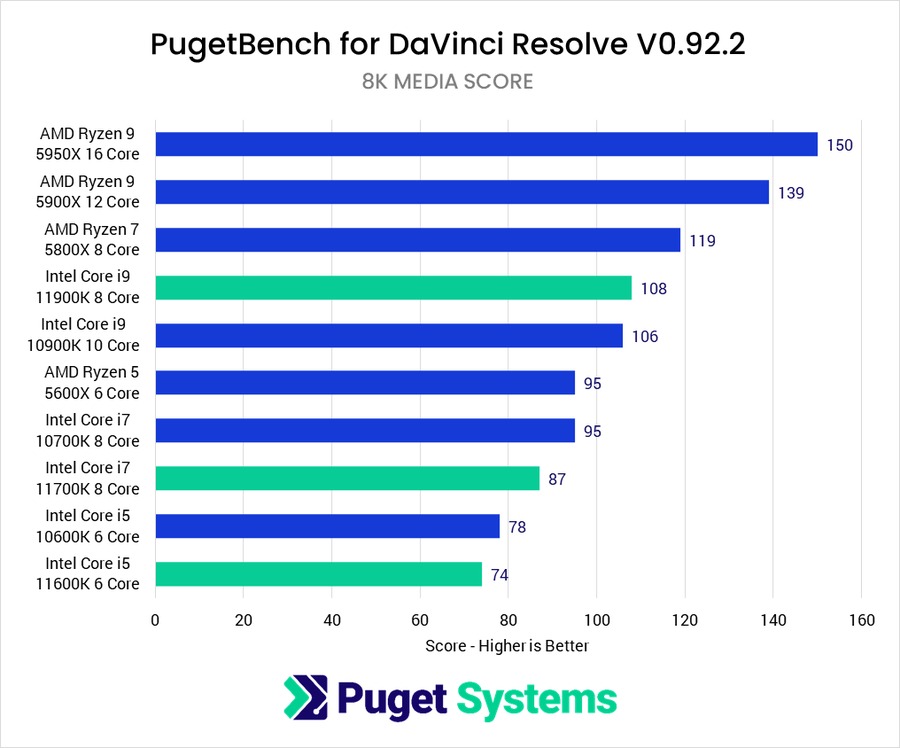 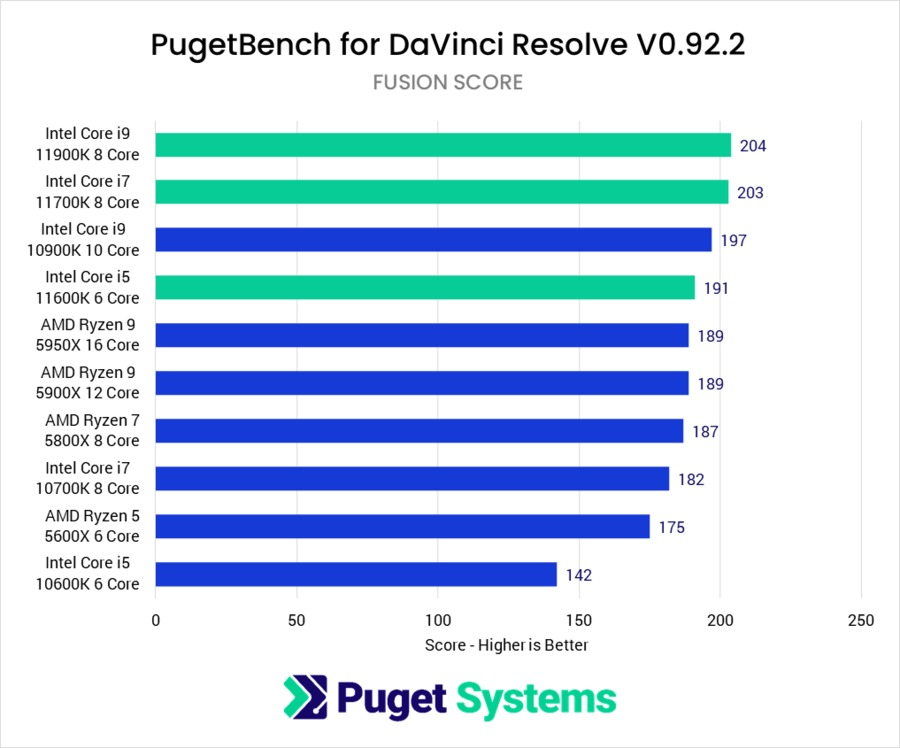 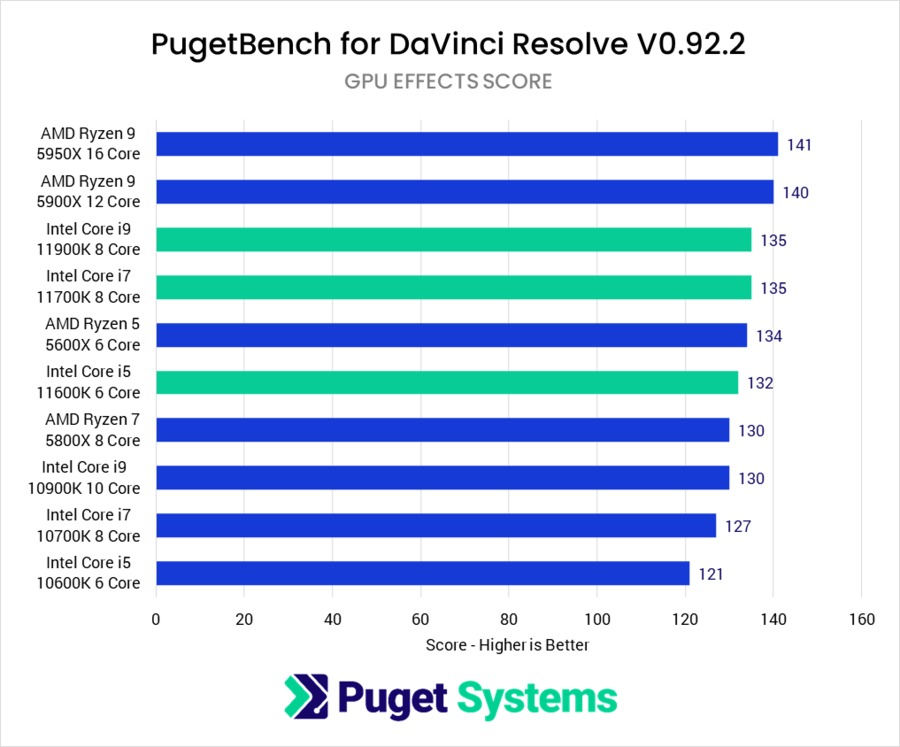 More than normal, we weren't sure how the new 11th Gen CPUs were going to perform in DaVinci Resolve since the top-end option (the Core i9 11900K) dropped from 10 cores to 8. The IPC and other improvements should definitely help the i5 11600K and i7 11700K, but the Core i9 11900K may actually see a drop in performance compared to the previous generation.

Luckily, the Core i9 11900K ended up scoring a bit better than the previous generation Core i9 10900K – although not by much. It is enough for it to overtake the slightly less expensive AMD Ryzen 5800X, but not enough to catch up to the slightly more expensive Ryzen 5900X. Overall, that makes the Core i9 11900K roughly in line with AMD's offerings as far as value goes, although it should be noted that most of the performance gain is from our Fusion tests where it is about 7% faster than the AMD Ryzen 5800X/5900X. When processing normal 4K and 8K media, the 11900K actually falls behind the 5800X by 4-10%.

Going a step down to the Core i7 11700K, however, Intel is again right in line with AMD from an overall standpoint; performing between the Ryzen 5600X and 5800X. The 11700K is again terrific for Fusion tasks, but this time also holds up well when processing 4K media. It falls behind AMD for 8K media processing, although to be fair, if you are working with 8K media in DaVinci Resolve, you are likely going to want a CPU like Threadripper that is significantly more powerful than the CPUs we are looking at in this article.

Last up is the Core i5 11600K which does very well against the slightly more expensive AMD Ryzen 5600X. Overall, these two CPUs score within a few percent of each other and are also identical when processing 4K Media. The main advantage to the 11600K is that it is about 9% faster in Fusion, but falls behind the 5600X by quite a bit for 8K Media. But again, since you would never use this level of CPU for 8K media in the first place, we would say that this actually makes the 11600K the better option for most users by a small amount.

Overall, compared to AMD, Intel a bit ahead at the i5 level and roughly equal at the i7 level. The Core i9 11900K, however, likely isn't worth considering since the 11700K is just as fast for Fusion, while AMD is faster for processing 4K and 8K media. The reason behind this sliding scale where Intel is stronger at the lower-end, with diminishing returns as you go up the stack, is very obvious if we look at the gen-over-gen performance: 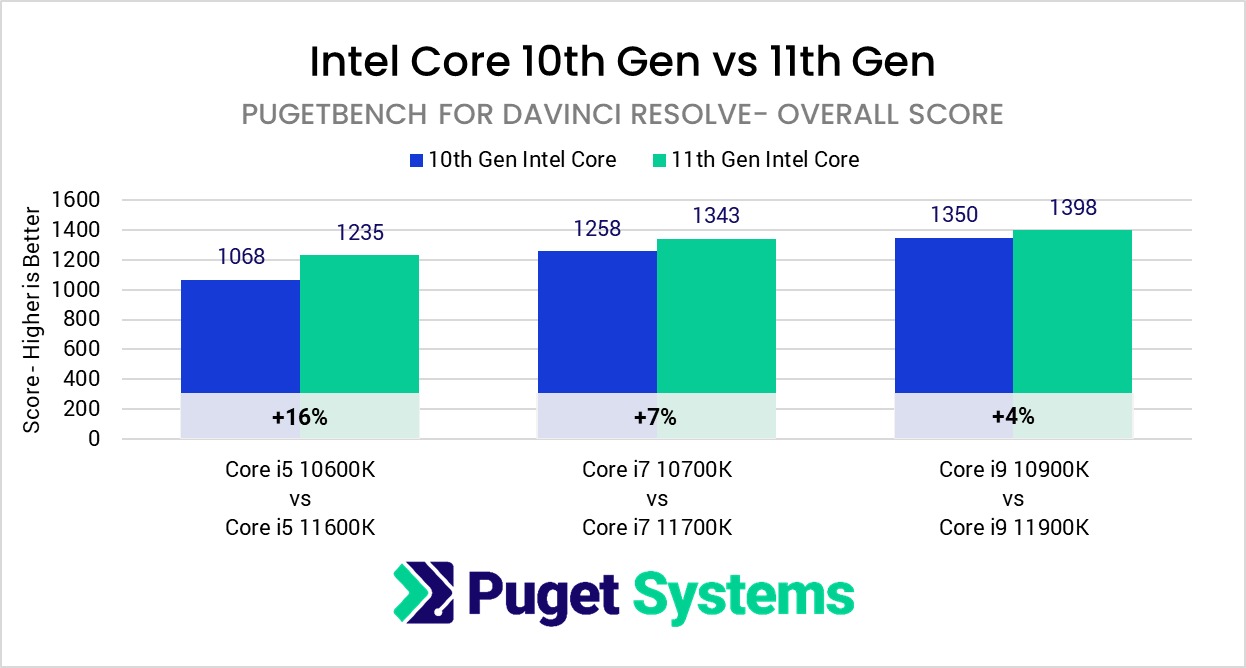 The Core i9 11900K, on the other hand, only saw a small 4% increase in performance over the Core i9 10900K. Considering it has two fewer cores, this isn't too bad in an application like DaVinci Resolve that is decently able to take advantage of multiple CPU cores, but in an absolute sense is a bit of a disappointment for the top-end SKU from the 11th Gen Intel Core family.

Whether the new 11th Gen Intel Core processors are a good investment for DaVinci Resolve depends on a number of factors including your budget and how important Fusion performance is in your workflow. At the Core i5 level, the 11600K is a solid choice as it is just as fast as the AMD Ryzen 5600X for 4K media, but a small amount faster for Fusion tasks.

The Core i7 11700K is slightly slower than the more expensive Ryzen 5800X when processing 4K media, but again is a bit faster for Fusion which makes it either an equal or slightly better value than the 5800X depending on whether you use Fusion or not. The Core i9 11900K, on the other hand, isn't any faster than the 11700K for Fusion, and is beat by the 5800X and higher AMD Ryzen SKUs for 4K and 8K media, making it a relatively weak choice for DaVinci Resolve compared to AMD.

Overall, we would rank the Core i5 11600K as a better option over AMD if you are on a tight budget, while the Core i7 11700K is roughly equal to the similarly priced options from AMD from a value standpoint. The Core i9 11900K, however, you likely won't want to consider since, depending on the workload, it performs either the same as the Core i7 11700K or is beaten by AMD's offerings.

Keep in mind that the benchmark results in this article are strictly for DaVinci Resolve Studio and that performance will vary widely in different applications. If your workflow includes other software packages (we have similar articles for Premiere Pro, After Effects, Photoshop, and Lightroom Classic), you need to consider how the system will perform in those applications as well. Be sure to check our list of Hardware Articles to keep up to date on how all of these software packages – and more – perform with the latest CPUs.