Overall, the new 12th Gen CPUs from Intel are a terrific option for those looking for a cost-effective DaVinci Resolve Studio workstation. They won't be able to match the higher-end AMD Threadripper (Pro) or Intel Xeon W platforms for more complex workflows, but they are solidly faster than the AMD Ryzen 5000 series.

Last week, Intel announced their 12th Gen Intel Core desktop processors (code-named "Alder Lake") with the most notable feature being the new hybrid architecture which utilizes a mix of Performance and Efficient-cores. The Performance-cores (P-cores) are what you typically would think of when it comes to a CPU core, and are designed to maximize performance for heavier workloads. The Efficient-cores (E-cores), on the other hand, are intended either for tasks that can be run in parallel, or for background tasks where higher performance isn't necessary. 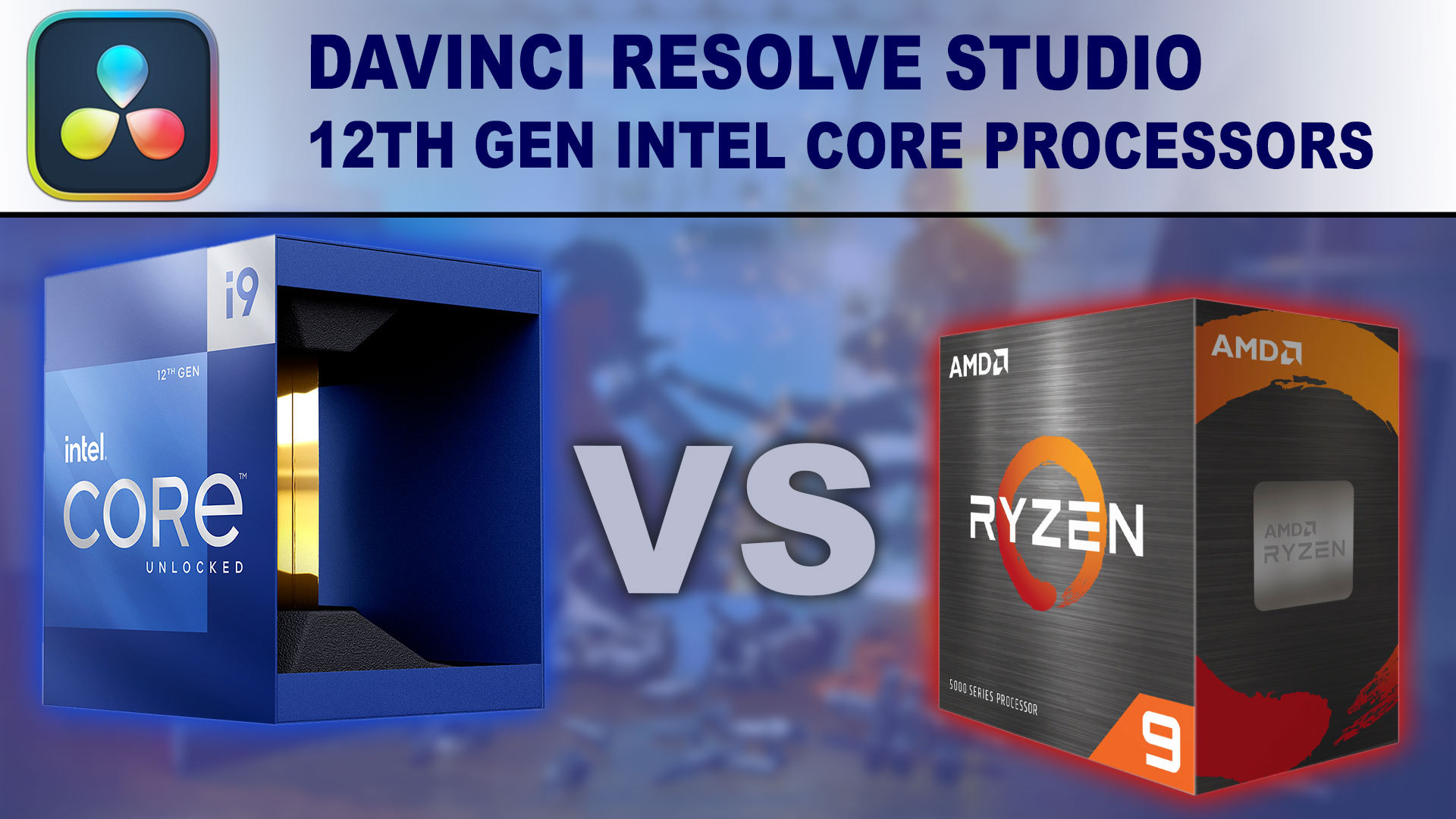 In this article, we will be examining the performance of the new Intel Core i9 12900K, i7 12700K, and i5 12600K in DaVinci Resolve Studio compared to a range of CPUs including the Intel 11th Gen and AMD Ryzen 5000 Series processors. If you are interested in how these processors compare in other applications, we also have other articles for Premiere Pro, After Effects, Lightroom Classic, Photoshop, and several other applications available on our article listing page. Or, you can check out the summary of all our results in our overarching 12th Gen Intel Core CPU Review Roundup article.

In order to see how the new 12th Gen Intel Core processors perform in DaVinci Resolve Studio, we will be comparing them not only to the previous 11th Gen Intel Core CPUs but also to AMD's Ryzen 5000 series. For the test itself, we will be using our PugetBench for DaVinci Resolve benchmark and the 17.4 version of DaVinci Resolve Studio. This benchmark version includes the ability to upload the results to our online database, so if you want to know how your own system compares, you can download and run the benchmark yourself.

Windows 11 had a rocky start with AMD CPUs and processors with more than 32 cores, but with the latest updates, we found the difference between Windows 10 and Windows 11 with these Ryzen CPUs to be negligible for Premiere Pro. We will have those results, and similar testing examining Intel 12th Gen performance on Windows 10, in an upcoming "12th Gen Intel Core – Windows 11 vs Windows 10" article.

Feel free to skip to the next sections for our analysis of these results to get a wider view of how each configuration performs in DaVinci Resolve. 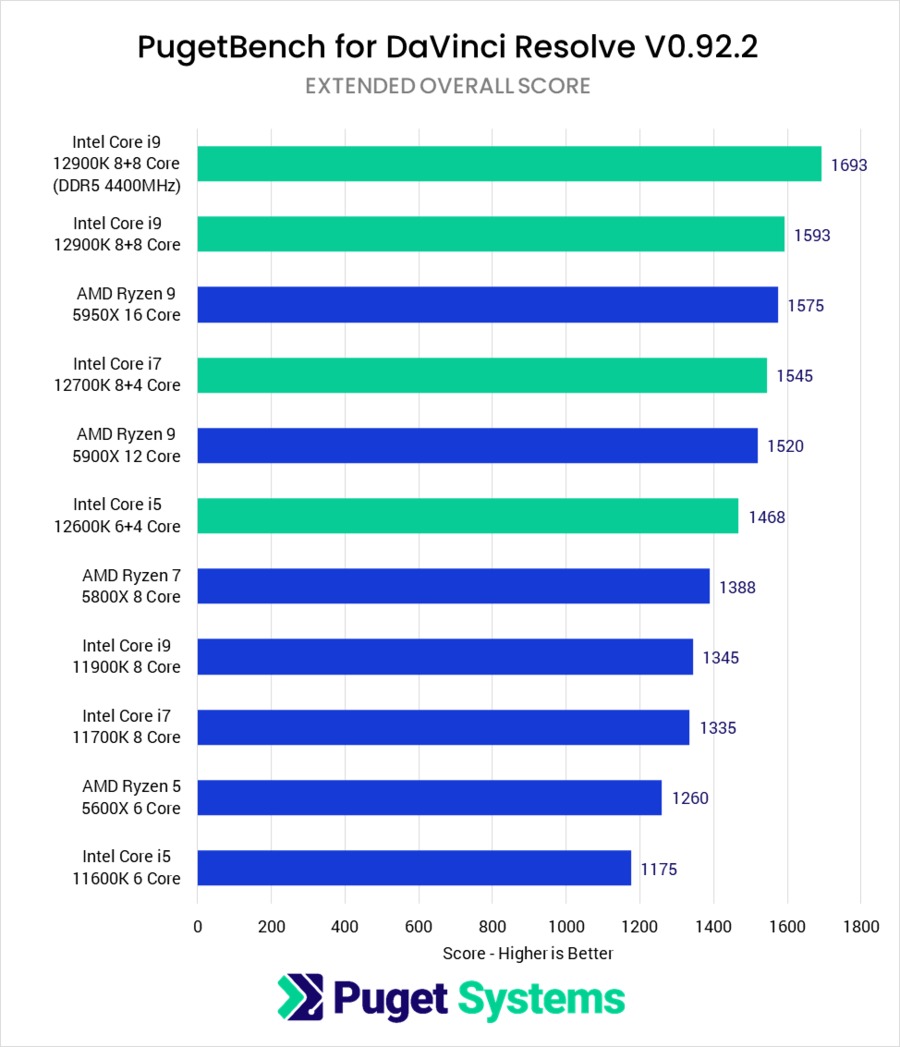 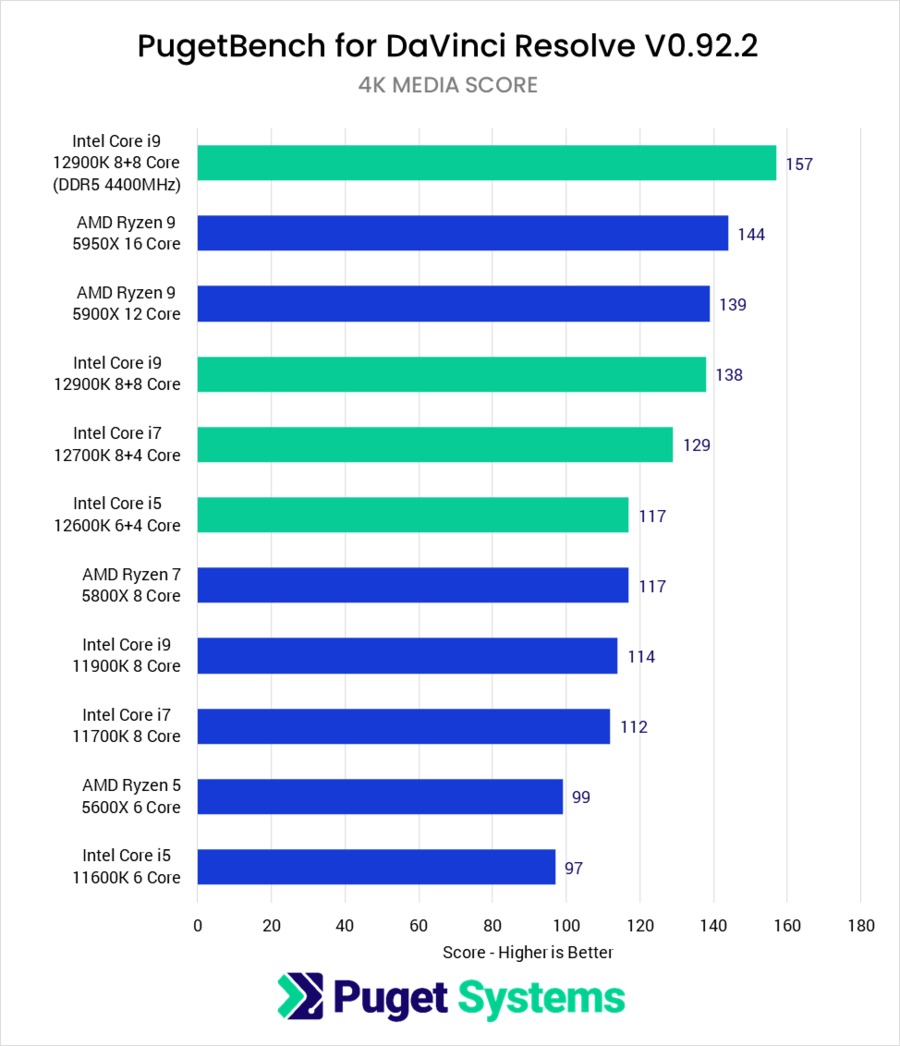 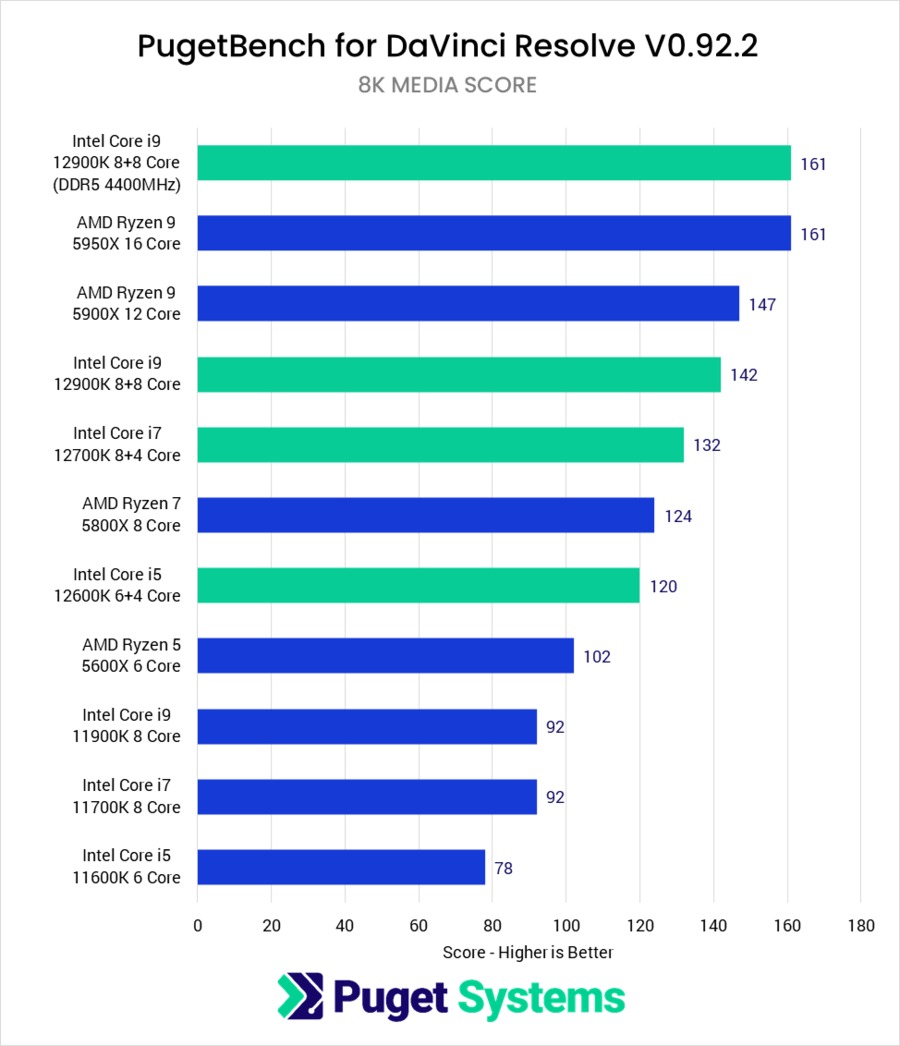 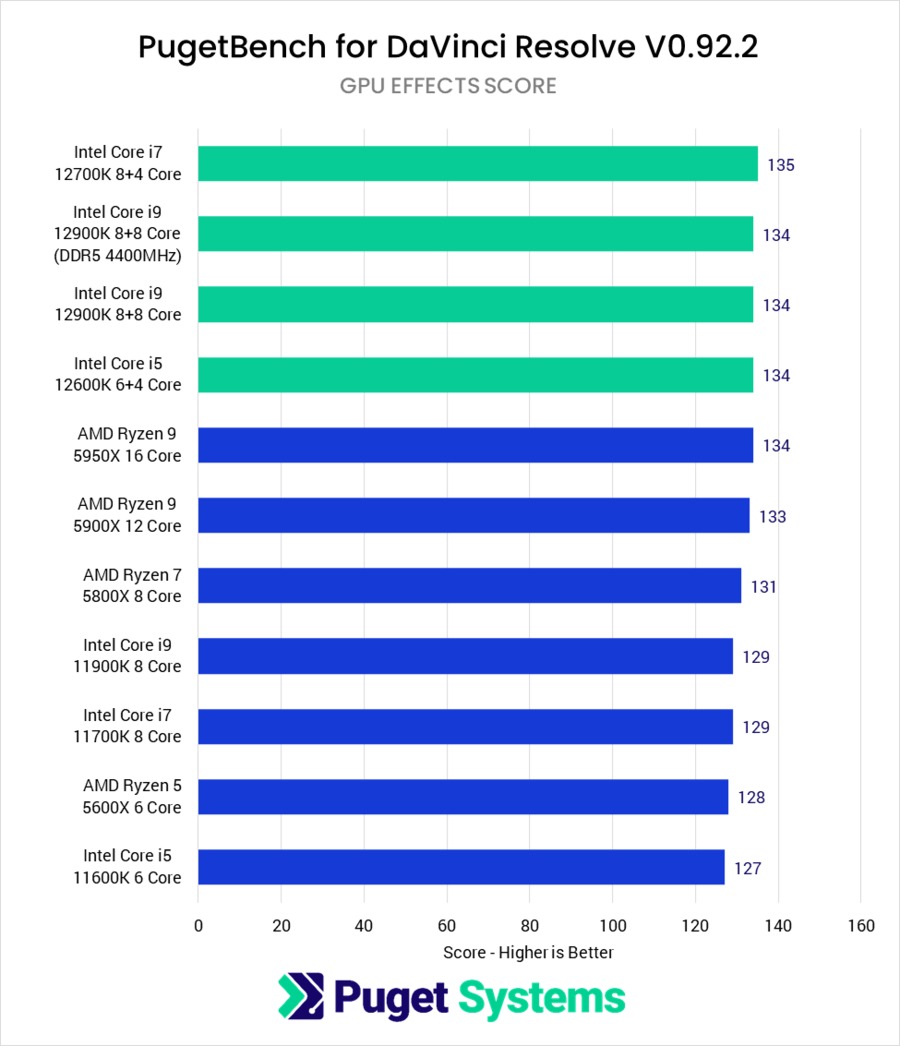 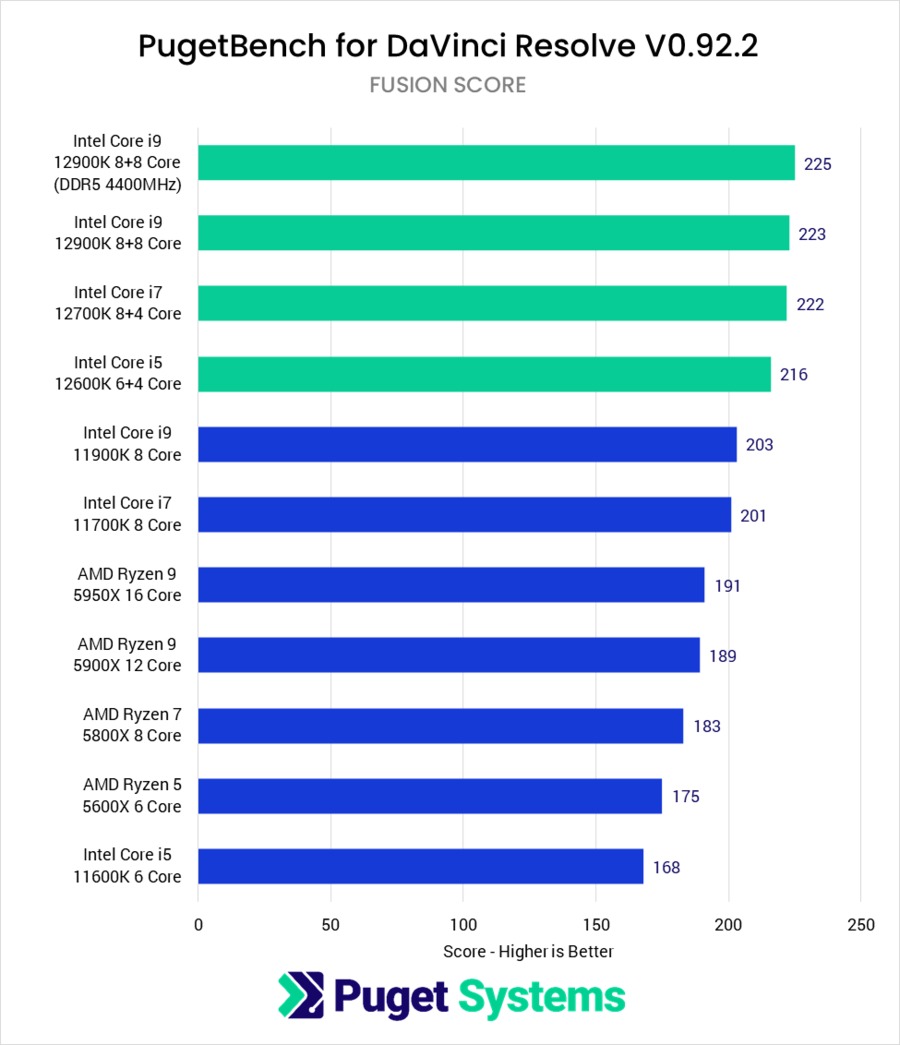 With something as significant as moving to a hybrid architecture, it is understandable that there might be a few kinks that have to be worked out. Luckily we found minimal issues with the apps we tested – including DaVinci Resolve Studio.

DaVinci Resolve is a very interesting application to look at because there are three distinct areas of performance. The first, and most commonly examined, is the GPU performance for tasks like OpenFX and noise reduction. This area typically isn't as important when testing processors, but we did see a small ~5% performance gain in these tests with the Intel 12th Gen CPUs over the AMD Ryzen 5000 series.

More important for the CPU is performance when processing footage (as shown in our 4K and 8K media scores), and for Fusion. Fusion is actually more important than many realize, as it is used when doing motion graphics and VFX, including most of the title, lower third, and other motion graphics presets that come in Resolve. And in Fusion, the new 12th Gen CPUs really excel with the i9 12900K, i7 12700K, and i5 12600K all coming in at approximately 20% faster than the Ryzen 5900X, 5800X, and 5600X respectively.

However, when processing 4K and 8K media, AMD is able to make a bit of a comeback at the higher end of the product stack. Here, the AMD Ryzen 5900X and Core i9 12900K effectively tie in performance as they perform within the 4% margin of error we typically account for in real-world tests like this. However, this is only with DDR4 memory and when we switch up to DDR4, the Core i9 12900K gets a big boost to performance – jumping ahead of the 5900X by 10-13%. In fact, that is enough for the 12900K to beat even the Ryzen 5950X for 4K media, and to perform on par for 8K. 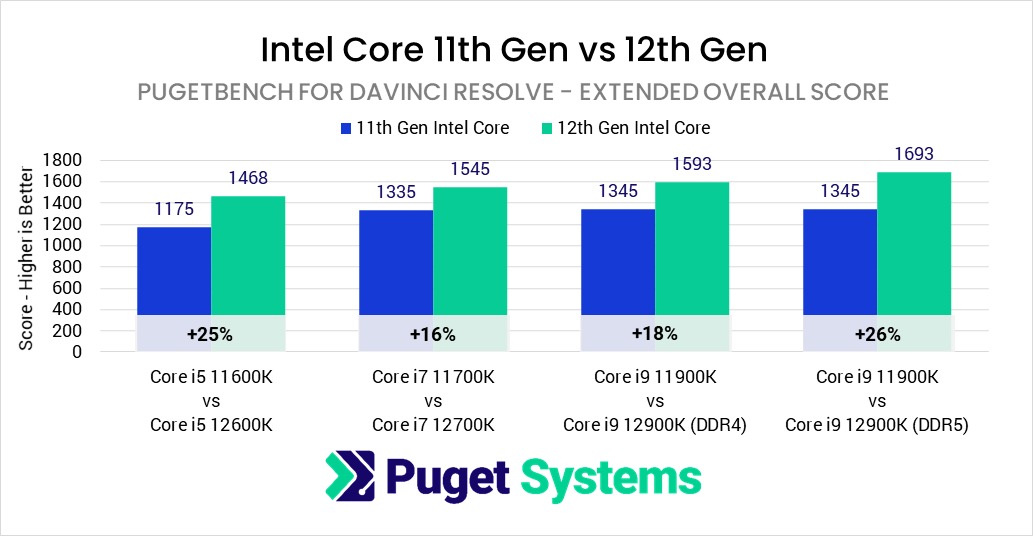 With Intel taking the lead over AMD in Resolve, you can guess that the new 12th Gen CPUs must be quite a bit faster than the previous 11th Gen models. But what you might not realize is just how large the performance gain really is.

The Core i5 12600K is where we saw the largest gen-over-gen performance gain without leveraging DDR5, coming in at a full 25% faster than the Core i5 11600K it is replacing. What is really incredible about the i5 12600K is that it is actually fast enough that it beats the top-end Core i9 11900K from the last generation by about 9%.

Overall, the new 12th Gen CPUs from Intel are a terrific option for those looking for a cost-effective DaVinci Resolve Studio workstation. They won't be able to match the higher-end AMD Threadripper (Pro) or Intel Xeon W platforms for more complex workflows, but they are solidly faster than the AMD Ryzen 5000 series.

However, it is worth noting that a good chunk of this performance gain comes from their exceptional performance in the Fusion portion of Resolve. The i5 12600K and i7 12700K are a solid 6-18% faster than their AMD counterparts when processing 4K and 8K media as well, but at the top-end, the Intel Core i9 12900K and AMD Ryzen 5900X effectively tie when ignoring the Fusion tests unless you are able to use DDR5 memory.

Even though the i9 12900K and Ryzen 5900X perform about the same when processing media with DDR4 memory, we would still give the edge to Intel. Partially because having PCIe 5.0 is a great feature to have as far as future-proofing goes in GPU-heavy applications like Resolve. But more importantly, there are a number of variations of the H.265/HEVC codec where you can only get hardware decoding support via Intel Quick Sync. NVIDIA and AMD GPUs can handle some of the more basic flavors, but if you want to work with something like HEVC 10-bit 4:2:2, having Quick Sync on the 12th Gen CPUs is going to make a massive difference.

If this is a consideration for your workflow, we should have our "What H.264/H.265 Hardware Decoding is Supported in DaVinci Resolve?" article updated soon to include the 12th Gen CPUs for you to use as reference.

Keep in mind that the benchmark results in this article are strictly for DaVinci Resolve and that performance will vary widely in different applications. If your workflow includes other software packages (we have similar articles for Premiere Pro, After Effects, Lightroom Classic, and Photoshop), you need to consider how the system will perform in those applications as well. Be sure to check our list of Hardware Articles to keep up to date on how all of these software packages – and more – perform with the latest CPUs.