Skip to content
Always look at the date when you read an article. Some of the content in this article is most likely out of date, as it was written on March 21, 2019. For newer information, see our more recent articles.

Recently, NVIDIA has announced their new "Creator Ready Driver program". With this program, NVIDIA has promised specific driver releases for both GeForce and Quadro that are intended to give the best performance and reliability when working with creative applications. You can read about in its entirety in NVIDIA's blog post: More Creating, Less Waiting: NVIDIA RTX GPUs and Creator Ready Drivers Supercharge Creative Apps, but the key points are:

Based on this, our impression is that the "Creator Ready" drivers are essentially a slow-ring approach. Instead of immediately releasing a new driver, NVIDIA will hold it back in order to put that driver through extensive testing in creative apps. Only once it has passed this testing will it be made available to the public. That does mean that there is a chance that a "Game Ready" driver could give higher performance at time since there may be newer optimizations present in it, but you (hopefully) won't need to worry about any bugs or instabilities that could happen with these cutting-edge optimizations. 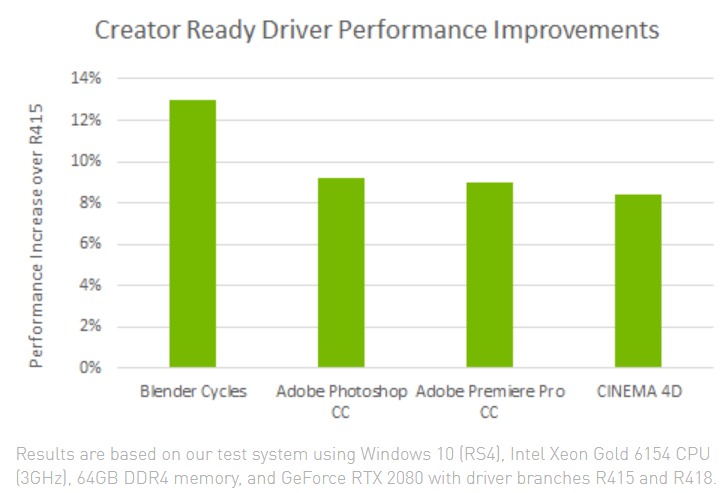 On social media and in our article comment sections, we have been repeatedly asked about the above chart from NVIDIA's blog post. NVIDIA is indicating that you should see about a 9% increase in applications like Premiere Pro and Photoshop – and even more in Cycles – using driver branch R418 (presumably the latest Creator Ready driver version 419.67) versus the older R415 (of which version 417.71 is the latest). Since Premiere Pro and Photoshop are two applications we often benchmark in our articles, we decided to run our own testing to see if our benchmarks line up with NVIDIA's results.

We will be testing with the following driver versions:

Unfortunately, NVIDIA's chart doesn't list the specifics of their testing. Not only do we not know version of Premiere Pro and Photoshop they used, we also don't know the exact effects or tasks they benchmarked. Their results could range from normal every-day tasks, to very specific things that complete in a fraction of a second.

To try to be as realistic as possible while also giving the new drivers a good shot at showing any performance improvements, for Photoshop we will be using a subset of our Puget Systems Photoshop CC Benchmark which is currently available for public download. This benchmark tests a range of general tasks and includes a number of GPU-accelerated effects. Full details on the benchmark are available on the benchmark download page.

For Premiere Pro, we have to go a bit outside of an everyday workflow for this testing. As we've shown in many articles in the past, Premiere Pro is almost always CPU-bound so our normal testing is unlikely to show a benefit with the newer drivers. However, we are developing a new version of our benchmark that has a specific "GPU effects" portion which we hope to release to the public in the next few months. This test uses 10 clips of 4K ProRes 422 29.97 and 59.94 FPS media as a base, and applies a number of effects either in singular or in a stack:

1st half of timeline:

2nd half of timeline:

Note that while the VR De-Noise effect loads the GPU heavily all on its own, each of the second set of effects will not tax a RTX 2080 very much on their own. However, by applying all of them at once we can get the GPU up to a reasonable load which should be able to show any performance differences with the various drivers. 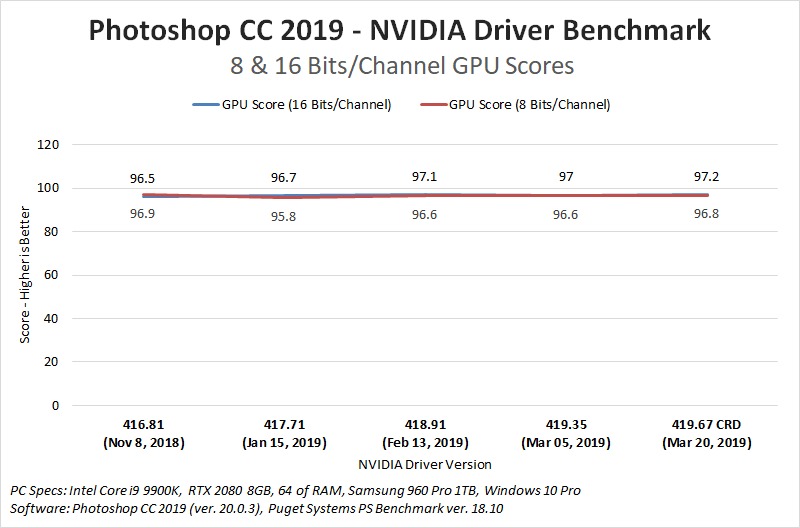 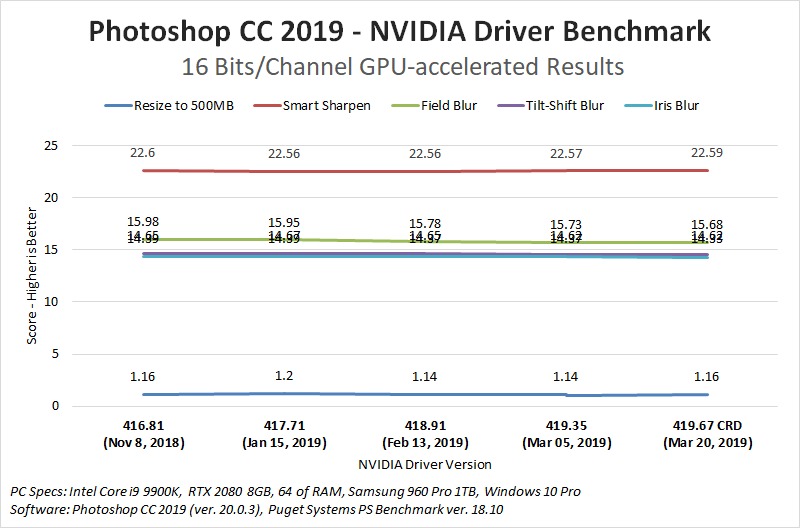 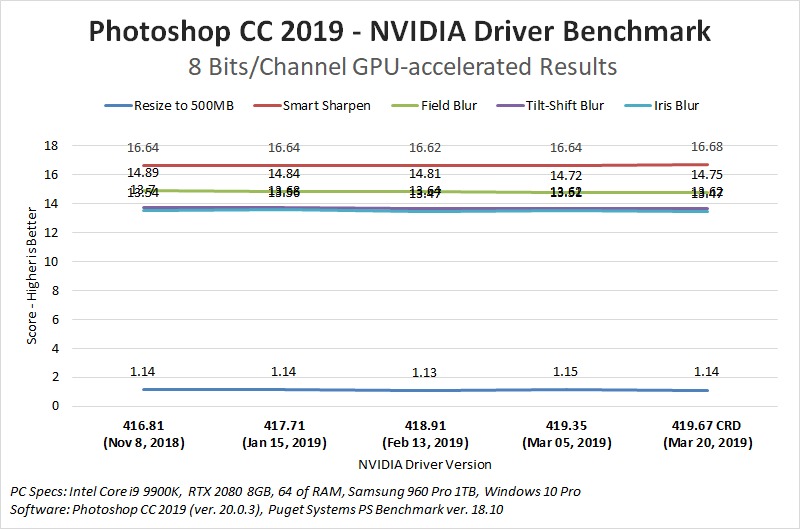 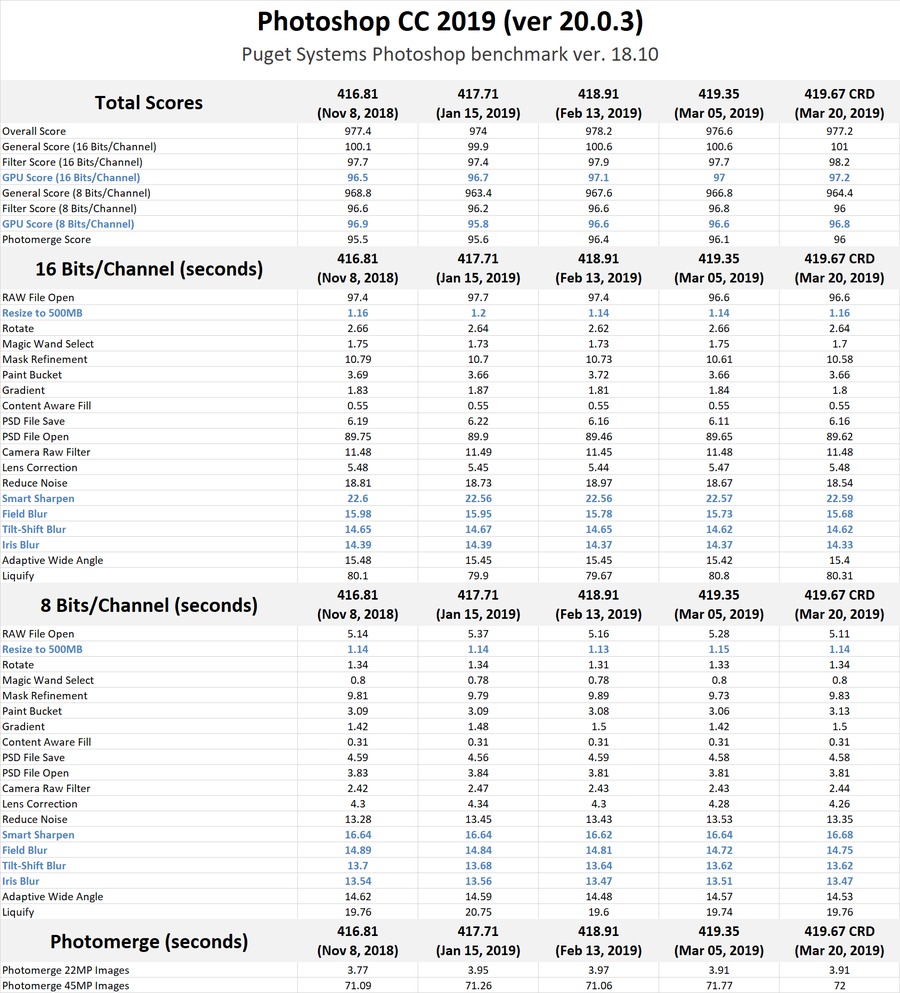 Our Photoshop benchmark (which is available for public download) tests a large number of tasks that we split into 3 categories: General, Filter, Photomerge; but there is also a GPU-accelerated score which contains results from any general and filter tests that utilize the GPU.

Unfortunately, none of the tasks we tested showed a significant performance improvement with the R418 branch of drivers – including the new 419.67 Creator Ready driver. The most we saw was a 2% performance gain with the Field Blur effect in 16 bits/channel mode, although that was only the difference between 15.98 and 15.68 seconds for grand savings of about a third of a second. 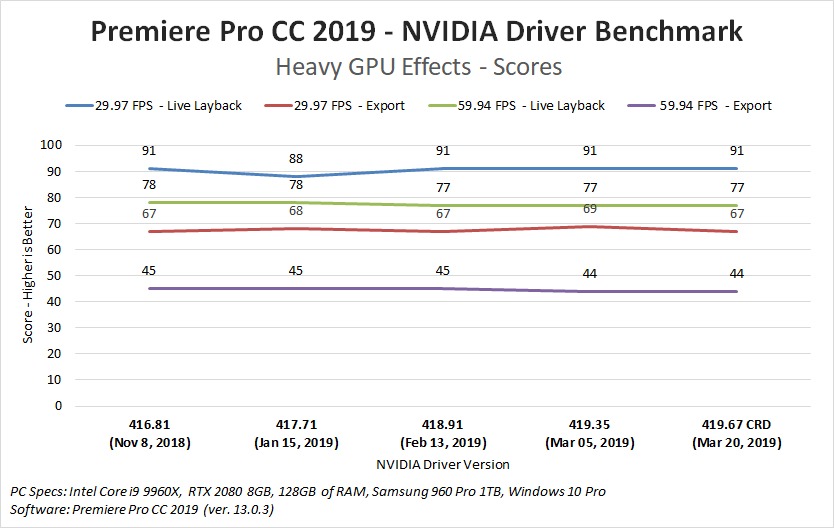 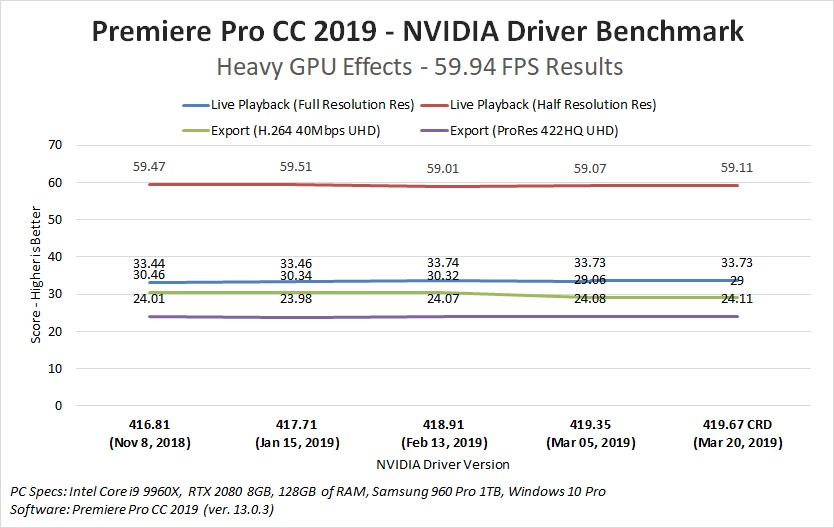 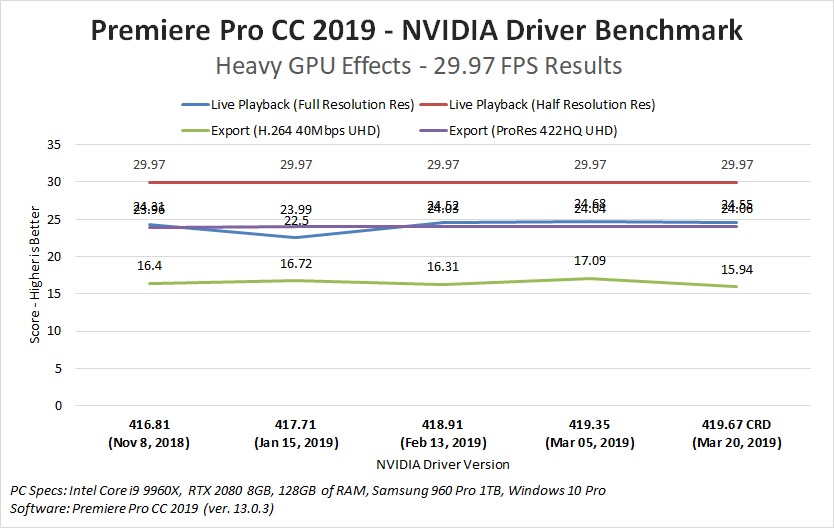 Unlike Photoshop, there is a bit to talk about in our GPU-effects focused Premiere Pro testing. On average, there was still no performance gain with the new drivers, but if you look at it in more detail it gets a little interesting.

When comparing driver version 417.71 (which is the last of the R415 branch) and any of the newer R418 branch drivers, we saw a 9% performance gain when playing our 29.97 FPS media with heavy GPU effects at Full preview resolution. This is going from 22.5 FPS to 24.55 FPS, which is a decent gain.

Unfortunately, if you go back to driver version 416.81, the performance closely matches what we saw with the newer drivers. So technically, yes, we saw an improvement with the R418 drivers over one of the R415 drivers, but it looks like it was due to a performance dip in one particular driver version rather than something native to the entire R415 branch. If we use 416.81 as the R415 baseline, the new 416.97 Creator Ready driver almost the same on average. In fact, if anything, the 419.35 driver is a hair faster than the 416.97 Creator Ready driver, although the difference is small enough that it is likely within the margin of error for this kind of benchmark.

While we didn't see any performance improvement with the 419.67 Creator Ready driver over older drivers like 416.81, we want to be clear that this doesn't mean that there isn't any performance gain to be had with this driver. We don't know exactly what NVIDIA tested, or even the specific application version they used. For example, it is entirely possible that their testing was done with a beta version of Photoshop and Premiere Pro. Or, they may have simply benchmarked a specific task that we didn't.

All in all, we still highly recommend using the "Creator Ready" drivers if you use applications like Premiere Pro, Photoshop, After Effects, Cinema 4D, or any other creative program. It doesn't look like performance is going to be a primary motivator for doing so, but the fact that NVIDIA has promised to do extensive testing with these drivers in popular creative applications is huge. In our opinion, reliability is much more important than performance, so the fact that we couldn't replicate NVIDIA's performance gains does not overly concern us.